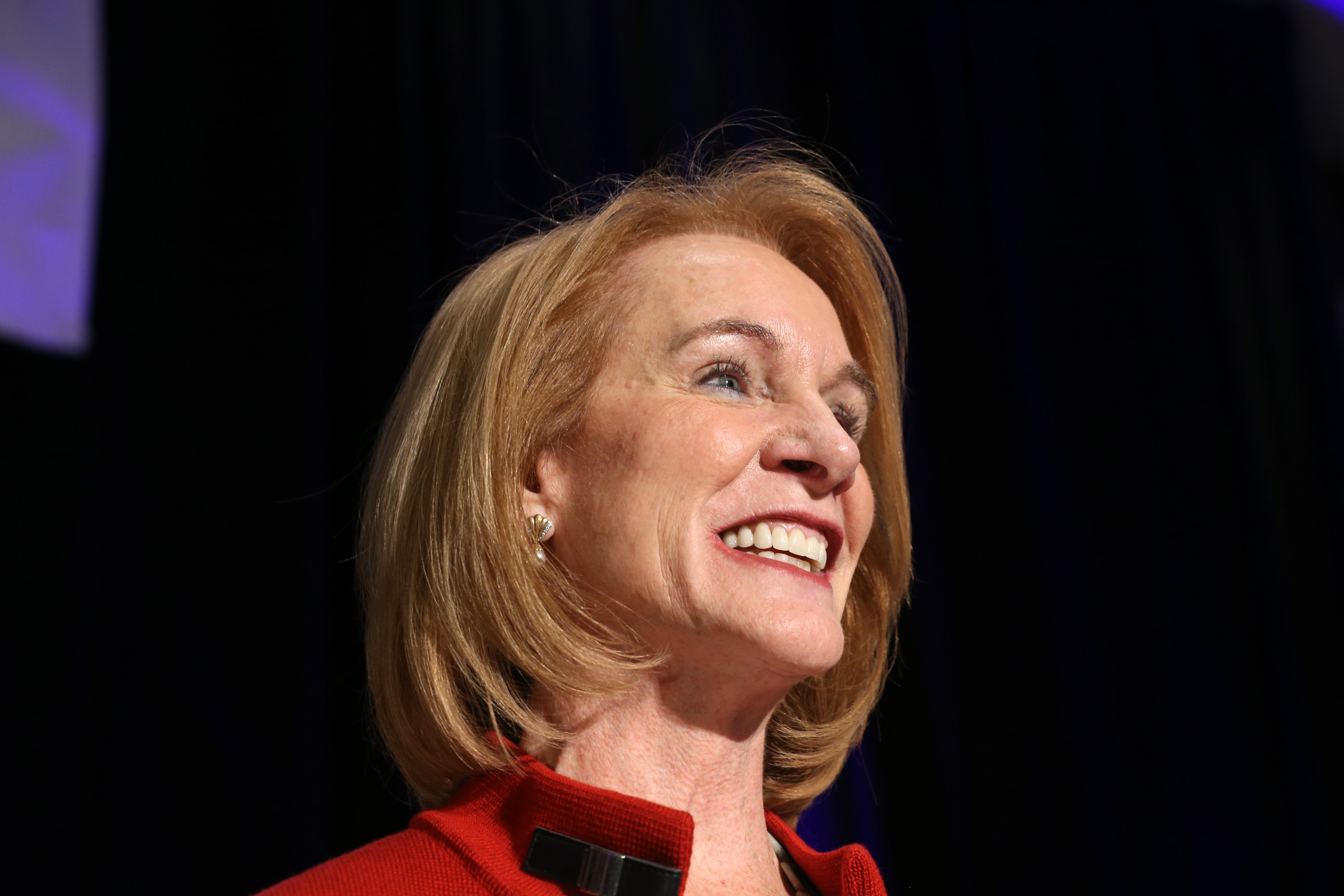 Jenny Durkan smiles at her election party after results indicate she'll be Seattle's next mayor. (Karen Ducey for Crosscut)

Minutes after King County released its first batch of election results Tuesday night, the Seattle police officer once assigned as security to former Mayor Ed Murray slipped out the back door of the Westin conference room to begin his new job: Escorting Seattle’s next chief executive, Jenny Durkan.

Durkan overwhelmed her opponent Cary Moon by more than 20 points, according to the preliminary vote count. Moon did not concede, holding out a thread of hope that enough late-arriving ballots could tilt the results back in her favor. But while Moon is likely to narrow the large gap in the coming days, it will almost certainly fall short, making Durkan, the 59-year-old former U.S. Attorney, Seattle’s first female mayor in 89 years, victorious after picking up the broad labor and business backing accrued by resigned Mayor Ed Murray. For a play by play of how the night unfolded, check our live blog.

“We will build a better city, we will build a better future and we can be proud of it,” said Durkan in what was essentially a victory speech. “We really can show what it looks like when we put progressive values into action. And can I just say to Donald Trump: Keep your hands off Seattle.”

Moon, in a Pike Place Market brewery, acknowledged that it did not look good for her, but added, “Seattle late voters may surprise everyone. We’re not out of this yet.”

On the Eastside, in the highly watched race for control of the state Senate, Democrat Manka Dhingra leads Republican Jinyoung Lee Englund by 11 percentage points, handing the Democrats control of both houses of the state Legislature.

Among King County’s highest profile races, only the race for sheriff was a surprise: Incumbent John Urquhart trailed challenger Mitzi Johanknecht, a stunning turnaround amid sexual abuse accusations against the sheriff.

As the rest of the country watched a minor wave of Trump backlash sweep states like Virginia and New Jersey, in Seattle, those who ran on upending the status quo — Moon, Grant, Murakami, Lindsay — were shown the door.

Durkan, an attorney with a long and successful career, both in the lucrative private sector and in government as the country’s first openly gay U.S Attorney, stood out early in the marathon election season as the heir to former-Mayor Murray’s legacy. She declared her candidacy just days days after Murray, facing sexual abuse allegations, announced that he would not run for reelection. She would poach many of Murray's supporters, donors and, eventually, business and labor endorsements.

In an enormous field of 21 candidates in the primary, Durkan was often painted as the bogeyman — a member of the so-called “establishment” who was too cozy with business. The tag followed her as Amazon, Comcast and other corporations poured money into her campaign.

But Durkan’s experience as U.S. Attorney was an easy sell to voters, one she effectively cast as a warmup for the pace and executive management in the mayor’s office. By contrast, Moon could never quite shed the cloud of her resume, which, as she described, was a “weird” collection of advocacy and urban planning. Although neither candidate had served in elected office before, Durkan had long offered her legal services to elected officials and could at least point to a stint in government. Moon could not.

On Capitol Hill, Teresa Mosqueda, a longtime labor advocate, currently serving as the Political and Strategic Campaign Director for the Washington State Labor Council, celebrated her dramatic advantage over Grant — a lead she accrued despite losing the endorsements of both The Seattle Times and The Stranger to her socialist opponent. “This election shows in order to win in Seattle you must stand with labor,” Mosqueda told the crowd. “We didn't know this was going to be a 60 plus percent team tonight!”

“This campaign was about making sure more of us who live here, who work here, can afford to stay here,” she said. “This is what it looks like when you have people who stand up and fight for greater shared prosperity."

“We don’t know which way the results will go in the coming days so we’re hanging tight to keep an eye on upcoming ballot drops,” he said in a statement. “Regardless, this campaign has been a success for the most marginalized in our community.”

The most remarkable local race of the evening, however, was likely that for King County Sheriff. Sheriff John Urquhart left his own re-election party just before news broke of the first round of the results, which revealed that he trails competitor Mitzi Johanknecht, 51 to 48 percent.

When Urquhart returned, he again began mingling with the crowd gathered at Shawn O’Donnell’s American Grill and Irish Pub. It took some time before he would directly address the reporters at the party.

“Of course I’m disappointed,” Urquhart finally said. But he added, there’s an “awful lot of ballots left to be counted.”

When asked about whether he had any regrets about how he had run his campaign or how he had handled allegations of sexual assault, Urquhart said he didn’t want to talk about the allegations but that he was “proud of the job I did as sheriff.” He added: “I did this for the voters of King County.”

Urquhart did say he would likely spend the next few days analyzing this election. He then spent the rest of the night talking and drinking with a small crowd of family, friends and supporters, looking more relaxed than he had earlier in the evening.

In the race for City Attorney, Scott Lindsay conceded to Pete Holmes. "I want to congratulate [Holmes] on earning a third term," he tweeted. "I have called Pete to congratulate him and I wish him all the best going forward."

Election night in Seattle and King County was good for women candidates, a fact that did not escape national organizations.

“I think tonight has been about remembering where we were at this point last year, and knowing that we marched, we have been fighting,” said Tiffany Hankins with NARAL. "We voted and now look where we are. Women are coming up."

For Durkan and Mosqueda, the new additions to Seattle City Hall, the transition to office will be quick: Because of the chaos around Murray’s resignation, their swearing-in date is more than a month earlier than it would otherwise be. Durkan especially will have little time to rest from the exhausting campaign.

And then, with housing prices through the roof, homelessness still growing, a clogged transportation system and a president antithetical to everything Seattle City Hall believes in, she begins her new job.