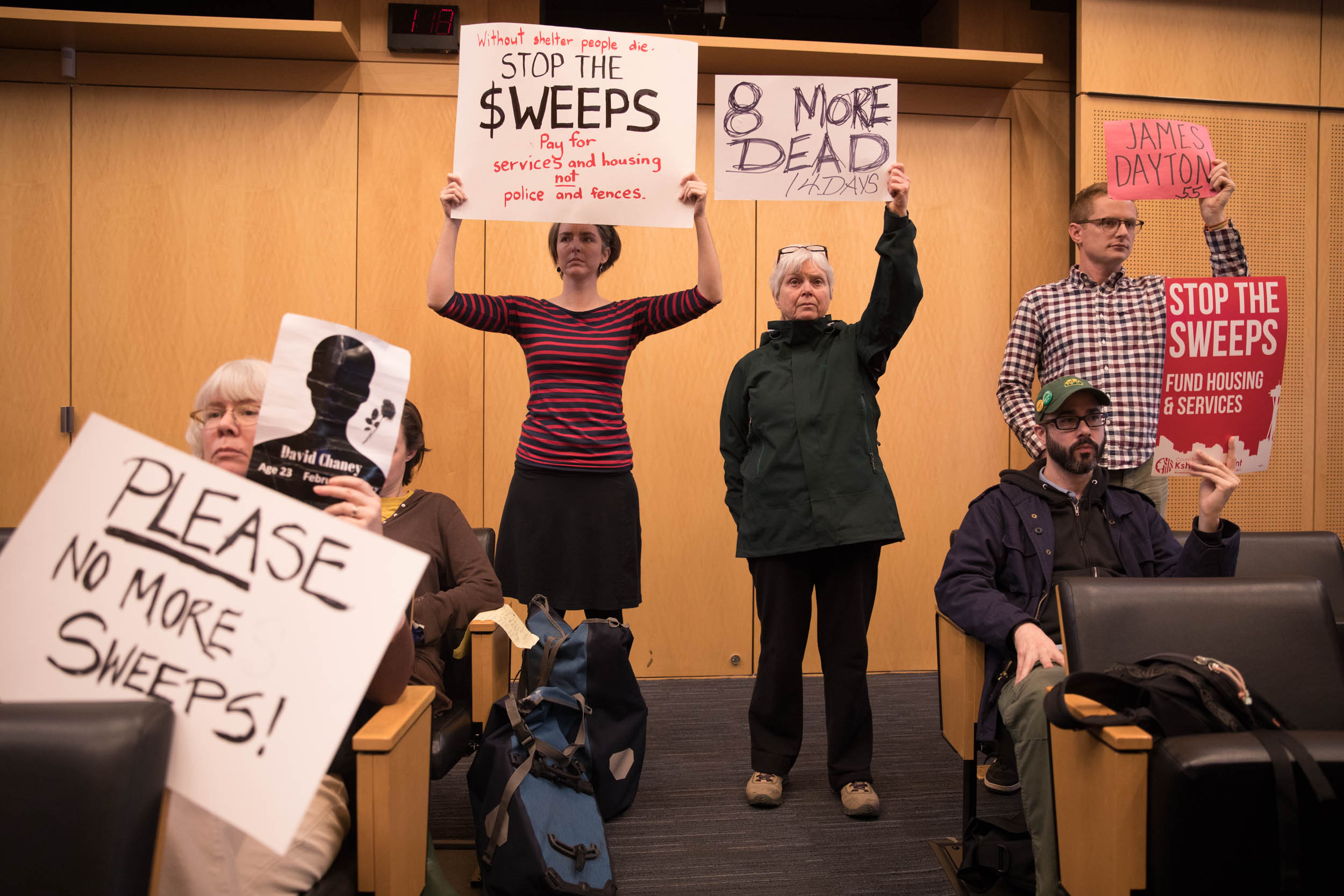 Social service providers are worried about how the homeless will fare in the face of fast-approaching changes to how the city funds its efforts to get people off the street.

On Nov. 27, the day before Jenny Durkan is sworn in as Seattle’s 56th mayor, Seattle’s Human Services Department will reveal which homeless service providers will get funding and which will not, the result of a wholesale rebidding of $30 million worth of contracts. It will be the most significant and dramatic step in carrying out the city’s shift toward new priorities for homelessness, which will focus, above all else, on getting people into housing. That could mean less money put into shelters, for example.

Following this great reveal, service providers will have just over a month, until Jan. 1, 2018, to adjust to their newly adjusted budgets.

While the city’s new plan for homelessness, known as Pathways Home, may look to its proponents as a much needed fix to a diffuse system, the near-term transition has some service providers worried. As the Seattle City Council haggles over investments for getting people off the street, the New Year’s deadline looks to some like a cliff and, so far, little in the budget gives them confidence that there is money to mitigate that quick transition.

“If we’re gonna stop doing some things in favor of doing other things, you’ve got to figure out how to make that bridge,” says Daniel Malone, executive director of the Downtown Emergency Services Center, a key nonprofit working with the homeless. “Because some of the things you’re going to stop doing may provide immediate assistance and it would be irresponsible to shut it off without some transition.”

The result, warns Malone, is the city could see an immediate jump in people on the streets. Separate from any judgments on the merits of Pathways Home, the plan has a “new focus on housing people, and I’m convinced that’s going to take more resources,” says Malone.

The questions became even more critical after a dramatic Seattle City Council showdown Tuesday over new revenue ended in all proposals for new funding being rejected.

On Wednesday, the council returned to the dais to pick up the pieces and try to salvage their budget babies, many tied to helping the homeless. About $13 million worth of proposals were tied to the council's taxing business, which was voted down 5-4 Tuesday. So, for council members to fund safe consumption sites, new Human Services staff, emergency shelter beds, permanent supportive housing services and a collection of other proposals, they would have to do so through cuts or loans.

Amid the city's prosperity, it’s been years since the council found itself looking for cuts it didn’t want to make, much less wondering how to do so while trying to ease a transition as sweeping as New Pathways envisions. But Wednesday’s proceedings had the feel of recession times, a reflection of just how desperate council members are to do more to fight the homelessness crisis.

The council’s rapid trimmings were a reminder of how tense austerity governing can be. Council members fought over whether to cut as much as 17 percent of the mayor’s office budget, to be diverted toward homeless services. When the cuts were approved, 5-2, Councilmember-turned-Mayor Tim Burgess shot out a statement, excoriating his former colleagues over what he called a “misguided surprise [that] illustrates the harm that can be caused when significant budget decisions are made on the fly without a thorough analysis of impacts.” The council also hit the Department of Parks and Recreation hard, for nearly $1 million in cuts.

But even those cuts did little to make up the difference between what — absent any new tax — the council has and what it thinks it needs. As a result, the council looked to loan itself money — money they do not have now, but figured they will soon get by selling property off along Mercer in South Lake Union. The only question was how much. A $4.3 million loan, proposed by Councilmember Lisa Herbold was approved, but a proposed $4 million expansion of that loan from Councilmember Kshama Sawant was rejected.

In total, the council pulled together just over $9 million for near-term solutions, including ways to deal with any further uptick in homelessness.

What does the council get for this money? It gets just over $1 million for shelter, a day center, foster youth, and survivors of domestic violence. It gets four new employees in the Human Services Department. It also plans to spend about $1 million in outreach and case work for sexual abuse survivors and victims of sex trafficking. There is $1.3 million in money for safe consumption sites. And it has $2.75 million for permanent supportive housing services, which, according to Councilmember Mike O’Brien, is to maintain programming that the United Way no longer funds.

Also on Wednesday, the council declined to block funding, as Sawant wanted, for so-called "sweeps" of unsanctioned encampments. It did, however, pass a measure from Councilmember Herbold that would block funding for any sweep that does not follow the city's own rules on such evictions exactly.

All of the money found on Wednesday is in addition to several new investments in the budget originally proposed by Mayor Burgess, which includes an expansion of the Navigation Team, a combination law enforcement/social worker outreach group working with the homeless.

Cut from the original proposal is a $1 million expansion of the popular Law Enforcement Assisted Diversion program, although Councilmember O'Brien shifted to LEAD $750,000 from a program for outreach to people living in RVs. Additionally, $3.3 million for response to the homelessness state of emergency has been struck.

However, while there is an expansion of some shelter space, there are no funds specifically earmarked for transitioning to the new funding models. Malone uses the Navigation Team as an example of programs that are getting additional money while the transition is still a question.

"I'm not trying to get into the merits of the navigation team," he said. But he suggested the city doesn't necessarily have a clear tie between its plans for dealing with homelessness and how it spends.

Malone also said that he doesn't know that the funding for a reasonably smooth transition won't be there. "We don’t have visibility into the decisions that will be made about what programs are funded and at what levels," he says. "So we think that the Human Services Department that’s conducting this RFP [request for proposals] process really has their work cut out for them to find a way to use the resources allocated to them to fund activities in different ways that meet the goals of the plan they have."

A spokesperson for Human Services, Meg Olberding said in an email, "The RFP has very clearly outlined our priorities for future funding. Those include both exits to permanent housing and bringing people indoors who are living unsheltered. It is not an 'either or', rather these are two complementary priorities that work together to effectively address homelessness. We are working to ensure that our funding decisions best accounts for both of these priorities and does so in a way that best serves people who are experiencing homelessness."

But for Alison Eisinger, Director of the Seattle/King County Coalition on Homelessness, it's the uncertainty of the RFP that is so challenging. "There's massive uncertainty and instability by doing this all at once as opposed to staging it," she says. "I think it creates a lot of roughness in the system.

"We want to make sure we don’t go backwards."