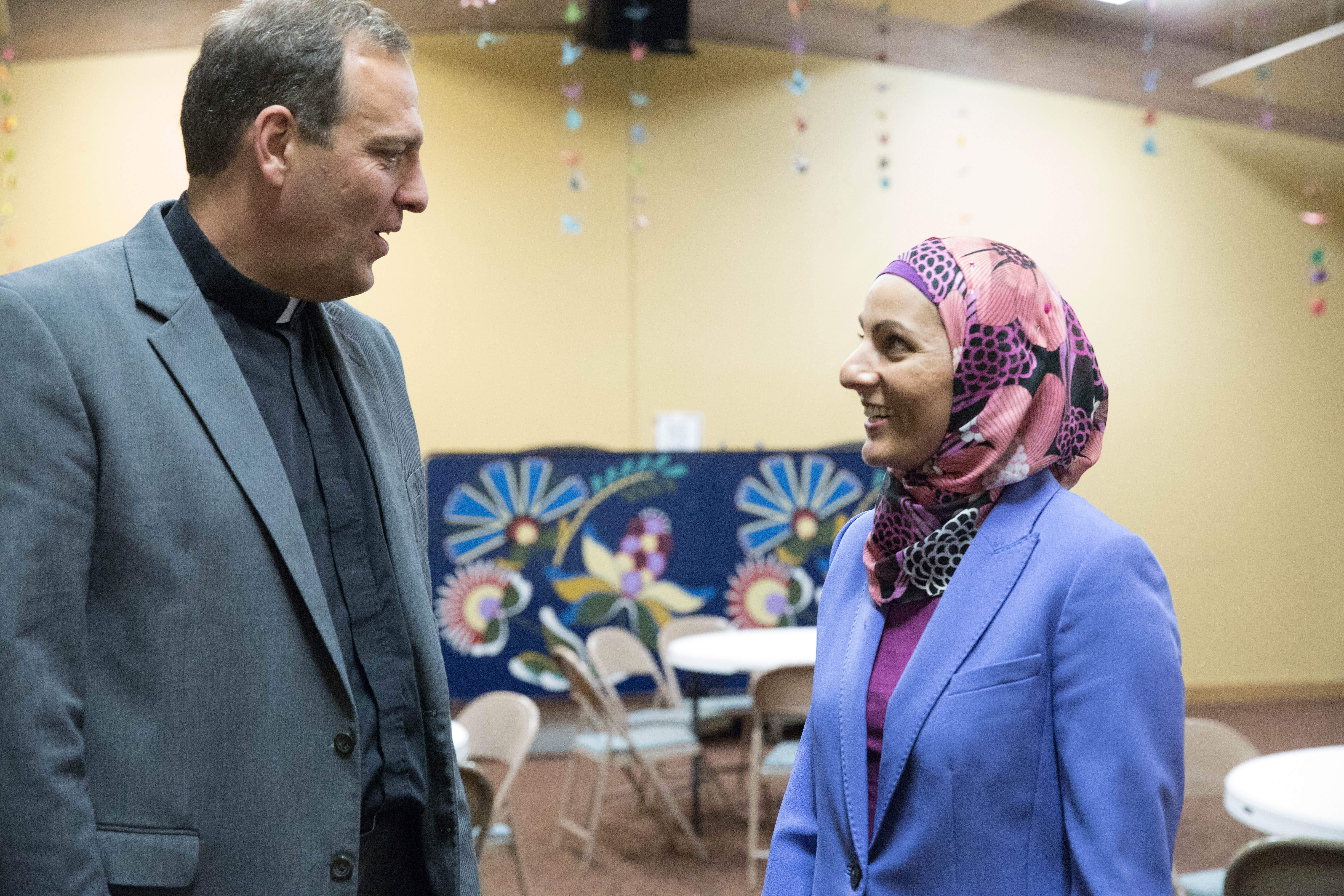 They’re not the sort of couple one is likely to encounter in many parts of the country: a hijab-wearing Muslim woman with a Harvard law degree and a white Lutheran pastor.

Yet dozens of Washington state residents — in urban centers and in small rural towns — have witnessed Aneelah Afzali and Rev. Terry Kyllo preach together in churches. Turns out, Afzali and Kyllo have one profound thing in common: a passion to fight against Islamophobia.

Although the duo has held an event in Seattle, Afzali and Kyllo have generally reserved their sermons for smaller, more conservative towns filled with voters who support President Donald Trump and who may have never personally met a Muslim. Towns like Mt. Vernon, with a population of 35,000. Situated just 60 miles north of Seattle, Mt. Vernon is the largest city in Skagit County. In last year’s presidential election, Hillary Clinton beat Donald Trump by fewer than 2,000 votes in the county.

On a recent Monday evening in Mt. Vernon, at St. Paul’s Episcopal Church, Afzali addressed a small crowd. She was dressed in a purple suit and hijab, and she was flanked by American flags and a Christian cross. As wind and rain pounded the chapel’s windows, she shared what had inspired her and Kyllo to organize the talks, which they’ve dubbed the “Faith Over Fear Roadshow.”

“I am so extremely bothered by what I see happening around us today, the growing divisiveness, polarization, hate and even violence,” Afzali said.

“We have so much else in common with our Christian sisters and brothers, but unfortunately there’s an entire industry that is trying to spread misinformation about Islam and Muslims in our country in order to divide us,” Afzali said.

The “overwhelming majority are just trying to live their lives and do good as the Quran commands.”

“Violence and evil, it has no unique religion,” Afzali concluded.

Since September, Afzali and Kyllo have presided over 11 talks around Washington. The town halls are designed to not only do away with misconceptions about Islam but introduce the public to what they, and others, refer to as the multimillion-dollar Islamophobia industry, which, according to a flier distributed at the Mt. Vernon event, aims to “make Americans afraid of Muslims and Islam.”

The Center for American Progress, a public policy research and advocacy group based in Washington D.C., describes the industry as a well-funded network of organizations that “peddle hate and fear of Muslims and Islam in the form of books, videos, reports, and websites.” Afzali and Kyllo are also in the midst of planning a tour of central and eastern Washington, which is slated to begin early next year. And next month they will lead a training for local religious leaders who want to help fight against discrimination and pass on what they learn about Islam to the faithful sitting in their pews.

The “Faith Over Fear Roadshow” is filled with simple — some might say even obvious — information. For example, Afzali points out that among the approximately 1.8 billion Muslims in the world, differences exist. The difference is that most Americans are familiar with Christianity, and can, therefore, make a distinction between, say, a mass killer like Dylann Roof — who according to reports attended church regularly— and other religious people they know. This isn’t necessarily the case when Muslims are involved. Muslims only make up about 1 percent of the U.S. population. 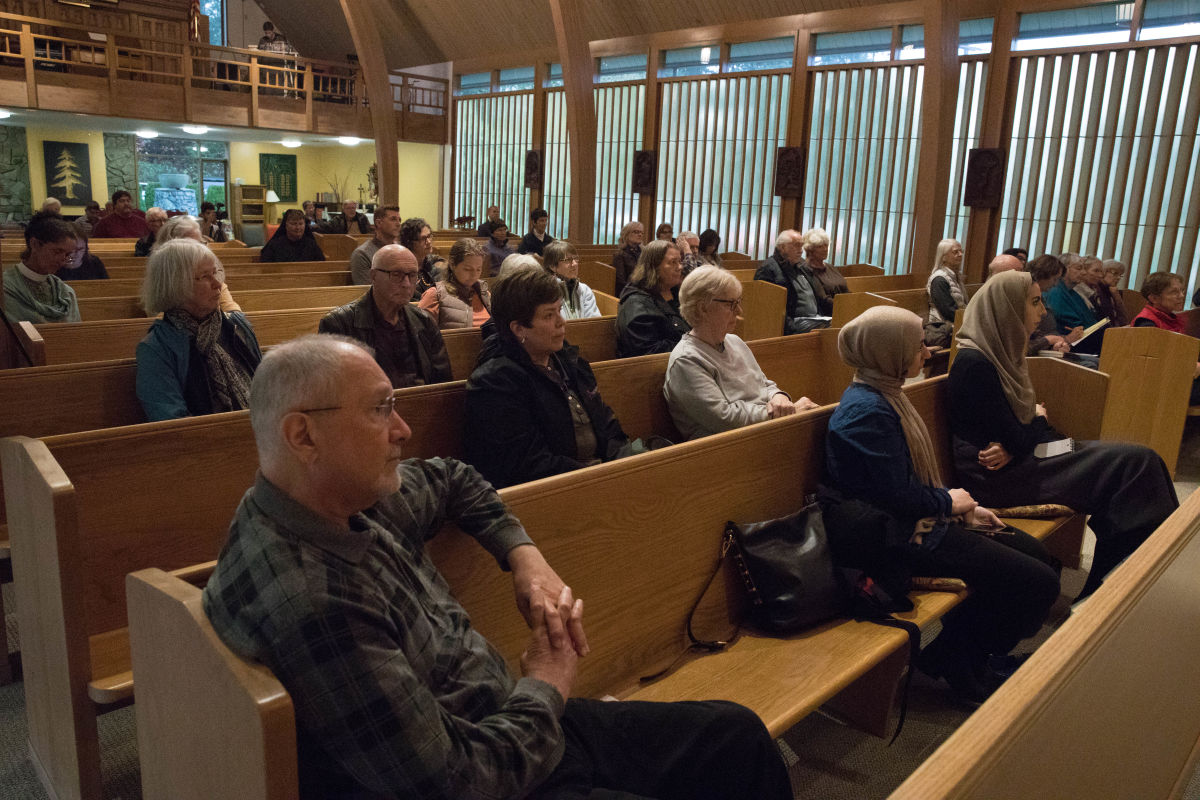 Ignorance about Islam and discrimination against Muslims thrives in the U.S. Last month, for example, Trump made headlines by sharing inflammatory videos that purported to show Muslims committing acts of violence.

Of the more than 6,100 hate crimes across the country last year, 307 of those crimes were against Muslims, up from 257 in 2015. The Southern Poverty Law Center also reports “anti-Muslim hate groups,” such as ACT for America, have dramatically increased in recent years, jumping from 34 in 2015 to 101 in 2016.

In June, across the country, Act for America held a “March Against Sharia.” In October, anti-Muslim graffiti was found in a girls’ bathroom at Kent-Meridian High School. In May, a man screamed anti-Muslim insults at two teenage girls on a Portland train before fatally stabbing two men who had attempted to intervene.

Anti-Muslim violence was on the rise, however, well before Donald Trump took office — “and it goes well, well beyond him as well,” Afzali said. “This is not something that we can sort of point to one person or blame one person for.” She can name numerous incidents of violence against Muslims before his tenure. For example, the 15-year-old teen in Missouri who in 2014 was deliberately run over by a driver with a history of anti-Muslim views in front of a mosque.

Afzali is 40 and describes herself as a recovering attorney. Raised in the Bay Area and in Portland, Afzali said growing up Muslim allowed her and her five siblings to embrace Islamic values such as honesty, compassion and education. The first in the family to graduate from college, Afzali went on to study at Harvard Law school but ultimately chose a different career path. Named by Seattle Magazine as one of the most influential Seattleites of 2017, Afzali now serves as executive director of the Muslim Association of Puget Sound’s newly launched American Muslim Empowerment Network (MAPS-AMEN).

In 2016, Afzali attended Trump’s first State of the Union address as a guest of U.S. Representative Pramila Jayapal. Afzali wore a hijab imprinted with a pattern of the American flag. “I did that to showcase the fact that my American and my Muslim identities, they go hand in hand,” Afzali said.

That same year, after he had spotted her in a video, Afzali met Kyllo, 53, at a coffee shop in Redmond. At the time, Kyllo was already working with Muslims. In fact, his interfaith work had garnered such a strong reaction from other pastors and participants, Kyllo had resigned from his job as pastor of two churches — in Mt. Vernon and Marysville — and had begun developing a regional effort known as Neighbors in Faith.

The pair agreed to try to reach people in rural areas with their message. “Muslims cannot have 100 best friends and sustain that. So we need faith community groups to be gathering people together so we can amplify the number of folks able to meet Muslims and have a significant conversation without wearing out our Muslim friends,” Kyllo said recently.

At the Mt. Vernon church, Kyllo implored the audience to reflect on their actions, especially with regard to Muslims.

“When we’re this anxious, and we’re this divided, and we don’t know each other, it’s easy for us to do what human beings often do....And that is to find some vulnerable group and to say if that group was just out of here, if they weren’t here, all our problems would be gone,” Kyllo said.

Some audience members sitting in the pews looked at one another and nodded their heads in agreement. Others whispered.

Out on the road, three questions about Muslims come up the most often:

What is jihad? What is sharia? And does Islam oppress women?

Jihad, Afzali explains, is the “struggle for the right path,” such as the struggle to pray five times on a busy day. The ultimate jihad is the spiritual struggle to overcome our ego and desires. Jihad can also involve physical confrontation in certain limited circumstances, such as when defending oneself or others.

Sharia refers to Islamic teachings and includes a command to uphold the law of the land, such as the U.S. Constitution.

With regard to the last question, Kyllo points to Afzali — a Harvard-educated leader in the community — as an example of an empowered Muslim woman.

“Even if people can’t remember much of what she said, just the fact that they experience her is really critical,” he said.

“Oppression in Muslim-majority countries is not because of Islam,” Afzali points out. “It is despite the teachings of Islam.”

Town hall after town hall, Afzali and Kyllo believe their work is making a difference.

After one of their roadshows, one man “walked up to me afterward, he shook my hand and he said, ‘You have made me reevaluate the news sources that I listen to.’ And that was kind of an amazing moment,” Kyllo said.

Michael Boss, 66, a freelance marketer who used to live in the Middle East, now resides in Mt. Vernon. A Christian and a member of St. Paul’s, Boss was one of the people in the audience who listened to Kyllo and Afzali the other afternoon. He said he’s typically believed “the role of women as being a more problematic part of the Islamic faith.”

He was glad to hear Afzali address the issue.

“That’s one narrative that’s probably truer in a place like Saudia Arabia with Wahhabism than it is, I think, with Islam as a whole, and I think that’s an important story.”

Another audience member participant, Teresa Dix, said the talk had given her the courage to approach her family in the midwest and broach the subject of Islam and politics.

“My heart is breaking because I cannot speak to my family, there’s such a division,” Dix, 65, a retired environmental educator, said. “My family, they’re good people, and I love them, but they’re so terribly manipulated.”

Dix said she hoped relating the program’s notes would “open the door.”

“They would be on the same page if they had the right information,” Dix said.

Afzali argues it isn’t just people in the dark about Muslims who should care about Islamophobia.

“Islamophobia affects every single American who cares about freedom and democracy,” Afzali said.

“Islamophobia also opens the door to other forms of bigotry because bigotry and hate, they’re like a fire in a house, and you can’t just say that’s my brother’s room, I don’t care about his stuff, because that’s not the way it works.” 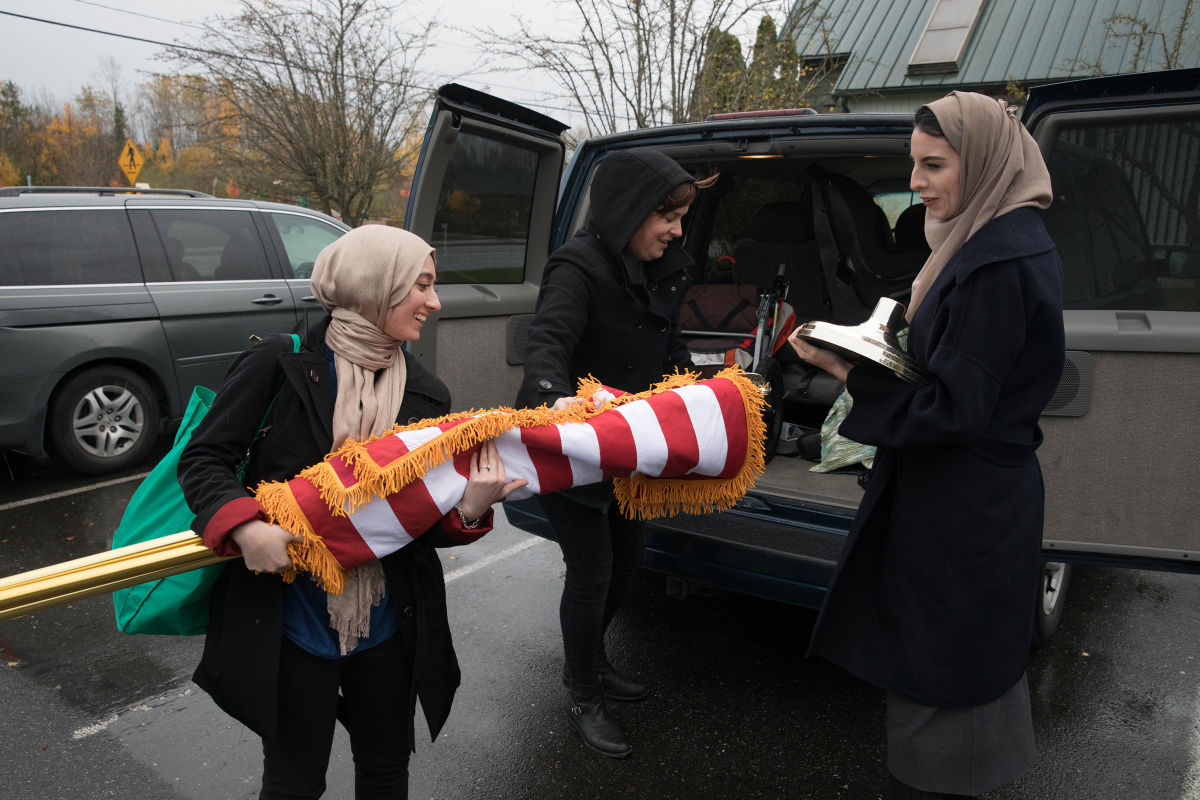 Council on American Islamic Relations team members (from left) Varisha Khan, Sarah Stuteville, and Izdihar Bailey unload American flags from their car to be placed inside St. Paul’s Episcopal Church during a “Faith Over Fear Roadshow” visit to Mt. Vernon. 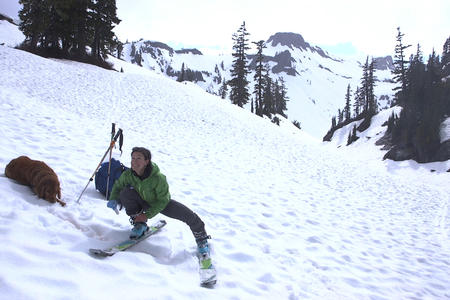 Human Elements: Climbing for the origins of life

In the land of laser domes, Seattle’s stands alone

Unlike similar venues, the shows at Seattle Center rely on real-time laser artists.