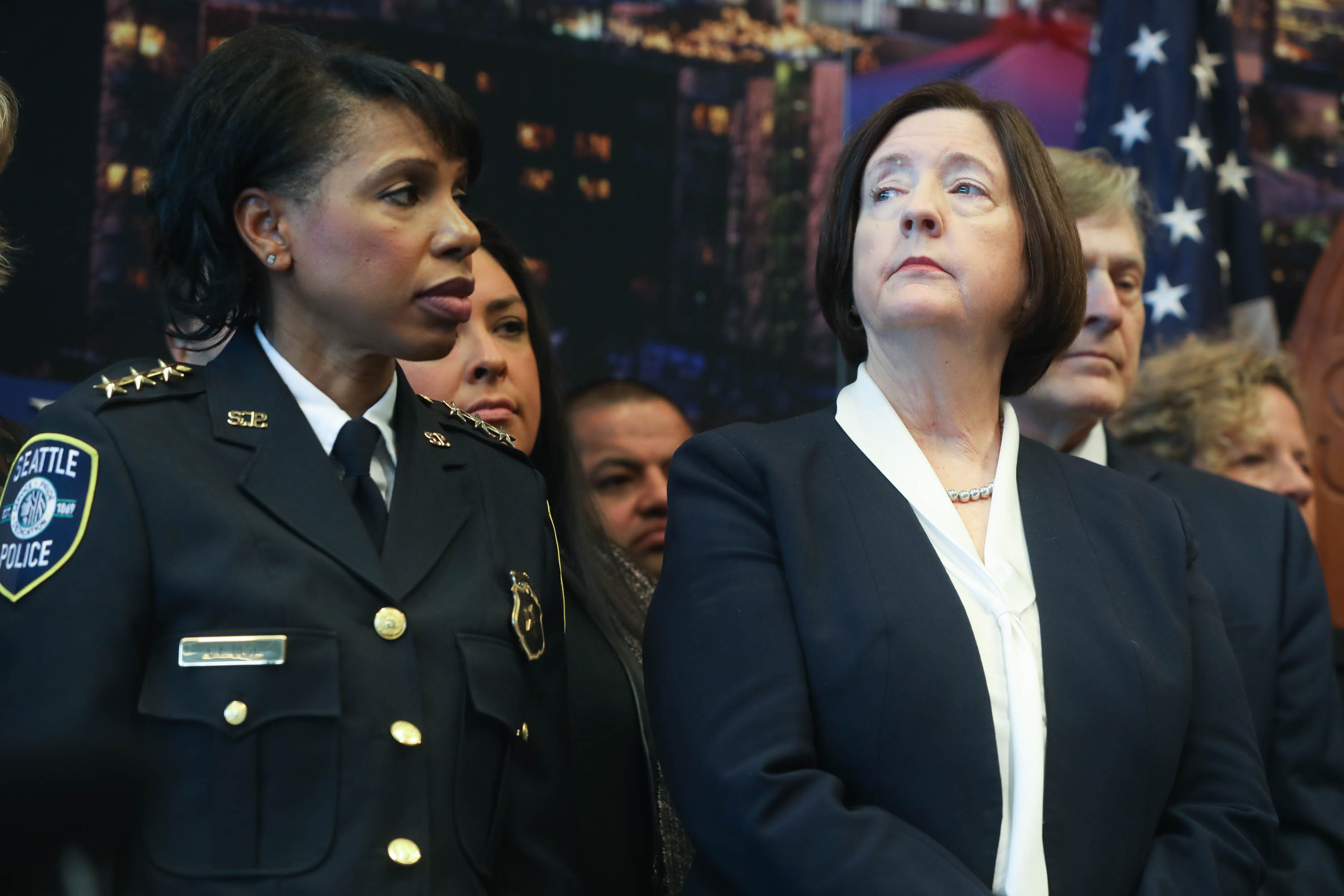 Seattle Police Chief Kathleen O’Toole is leaving her post as head of the state's largest police department at the end of the year, handing the reins to Deputy Chief Carmen Best to fill the role until Mayor Jenny Durkan chooses her successor.

It was a disappointment to Durkan, who spoke with O'Toole over the weekend. "I felt that Seattle would benefit if Chief O’Toole continued to serve at the helm of SPD," Durkan said in a press conference in City Hall Monday.

But O'Toole said she'd made up her mind months ago: She stayed on as long as she did only thanks to the urging of interim-Mayor Tim Burgess.

"In the end, the decision was certainly more personal than professional for me," O'Toole said. She still loves the profession, the job and the city, she said, but her husband, who lives on the East Coast, is ailing and she wants to spend more time with him.

O'Toole's departure caps a three-year tenure as Seattle’s first female Chief of Police and is hardly surprising among those who have worked closely with the department during that period.

Her marching order when she was hired in 2014 was to usher the Seattle Police Department through court mandated reforms. The City, the Department of Justice and the Community Police Commission are united in their belief that the obligations of that settlement agreement have been met.

But U.S. District Court Judge James Robart, who is overseeing the reforms, has not yet given his stamp of approval, citing ongoing negotiations with the department's largest union. Barring any news in the next month, O'Toole will leave before seeing her work completed.

Replacing O'Toole will be Durkan's opportunity to show which direction the new mayor wants to take the police department and that she is committed to continuing the reforms she has helped shape since her time as a U.S. Attorney.

The search will be national, Durkan said Monday, conducted by a search committee. Durkan named as co-chairs of the committee Burgess (who was once a police officer); Criminal Justice Training Commission head Sue Rahr; Deputy Legal Director for the ACLU Jeffrey Robinson; and Colleen Echohawk, executive director of the Chief Seattle Club.

Durkan said the full committee will likely convene in January. She hopes to have a new chief by spring.

When asked if she would apply for the permanent job, Chief Best said, "Absolutely."

O’Toole came to Seattle from Ireland, where she was overseeing reforms to the Irish Garda, Ireland’s national police service. Before that she was the commissioner of the Boston Police Department. O’Toole worked and learned under Bill Bratton in Boston, the famous police figure who pushed the “broken windows” style of policing, a proactive form of law enforcement that has since soured as a style that overly targets communities of color.

In her time in Seattle, O’Toole received national recognition as a reformer, receiving praise from former U.S. Attorney General Loretta Lynch and an invitation to join First Lady Michelle Obama for President Obama’s final State of the Union address.

Among local elected officials, she was often praised for whipping the department into shape. In one of her first moves as chief, she upended a more than three-decades old practice of promoting assistant chiefs internally and struck a deal with the Seattle Police Management Association to avoid an unfair labor practice complaint, hiring two outside chiefs and promoting a third from the position of lieutenant.

She also fired Officer Cynthia Whitlatch, who had arrested an African-American man walking with a golf club as a cane, accusing him of waving it at her. After interim-Chief Harry Bailey’s bungling of several misconduct cases, the firing was a refreshing change for frustrated activists and officials.

And under her watch, the department has implemented new crisis-intervention and de-escalation training requirements required under the consent decree. By outside measurements, the changes have resulted in fewer incidents of force against people in crisis.

"She changed the environment of the police department," said Burgess. "She introduced data analytics like we’d never seen before in terms of crime and the police response to crime. She more than tripled the in-service training police officers receive when they work here. She increased accountability."

Things were not always smooth: After the high-profile death of Charleena Lyles last summer, she was excoriated for not appearing in public forums. She was also criticized for giving only light discipline to the police officer who pepper-sprayed a Garfield High School teacher in 2015.

In 2016, the city was ordered to pay a $2.8 million settlement after a King County Superior Court judge determined O'Toole retaliated against two senior police employees.

Broadly, the department as a whole still struggles with disproportionate policing. A recent monitor’s report found that, while overall use-of-force is down, officers are still more likely to use force and point their weapons at African-American residents.

Rev. Harriet Walden, co-founder of Mothers for Police Accountability and an active advocate through nine police chiefs now, said she would have liked to see certain safety measures expanded more under O'Toole's watch, specifically the controversial gunshot locator technology in the city's south end. "When people shoot you in the daytime, they shoot you because they know they’re not going to go jail," she said.

But while O'Toole was not without controversy, the department has received ever-improving grades since its low point earlier this decade. Instances of force, especially against people in crisis, have dropped significantly and surveys have shown trust in the department rising year over year.

Rumors of O’Toole’s departure have swirled since nearly the day she was given the job by former-Mayor Ed Murray in 2014, as many looked back east, to Boston, where she kept close ties despite her move to Seattle. Those rumors reached a fever pitch in recent months as O’Toole took an advisory position with the Irish national police and seemed to vanish from most public events here. While she denied the position in Ireland would be a replacement for the job in Seattle, she also left open the possibility she would leave.

“It’s the end of the administration,” she told Crosscut in July, referring to then-Mayor Ed Murray’s expected January departure. “My contract coincides with the mayor’s contract. So who really knows? … I’ve never had any expectations beyond Mayor Murray’s tenure.”

After her election, Durkan was vocal about her wish to keep O'Toole. O'Toole strung out the rumors: At Durkan's swearing-in ceremony last week, O'Toole told Crosscut, "If I knew, I promise I would tell you right now."

Deputy Chief Best, who will retain the job until a replacement is found, is a veteran of the Seattle Police Department. She will be the first African-American woman to hold the post.

Reacting to the news, the Seattle Police Officers Guild, the union for rank-and-file officers, praised both O'Toole and Best. "Chief O’Toole guided the department through the very difficult task of completing all of the assessments required under the Department of Justice Settlement Agreement," said SPOG Vice President Rich O'Neill in a statement.

He added, "Chief Best has come up through the ranks and SPOG has full confidence in her ability to lead the department and to continue the work that was done by Chief O’Toole."

Updated at 12:25 p.m. with additional material and comments.