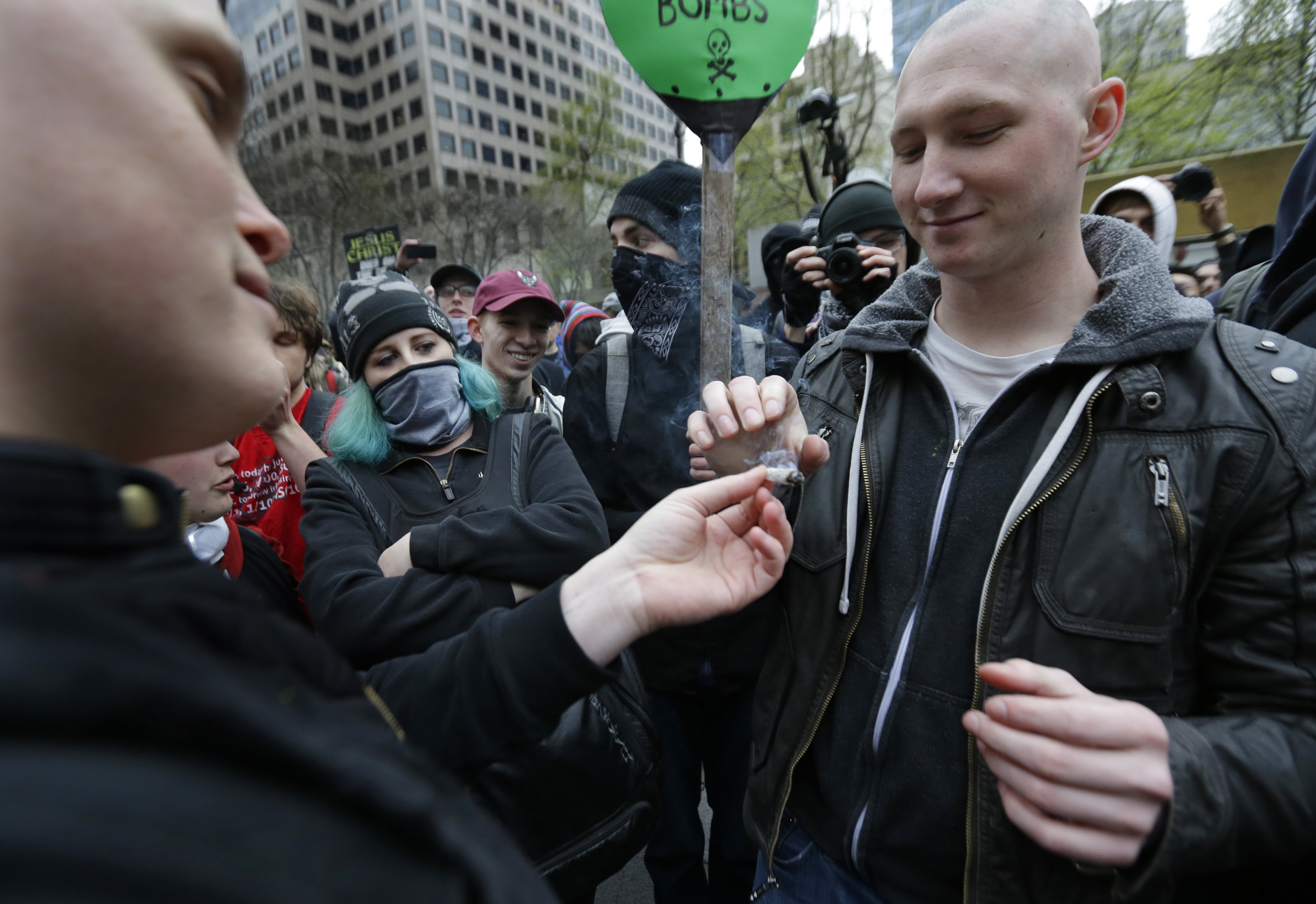 Protesters from conservative and liberal groups who previously had been arguing share a marijuana joint during a May Day protest in Seattle. (AP Photo/Ted S. Warren)

As we head into the new year, America is fracturing unlike any time since the 1960s — maybe even the 1860s. I have my opinion on which political tribe bears more responsibility for the current state of affairs, but that’s not relevant to the larger issue.

Yes, we should confront our nation’s complicated history — both beautiful and ugly — but a meaningful reconciliation of the past, and hope for a different kind of future, can proceed only with forgiveness. If both sides refuse to budge from assigning blame, healing will never begin.

This is not a call to lay down our political arms and hope for the best; lives and our nation’s future hang in the balance. This isn’t about organizing or electoral strategy; it is a plea for forgiveness and understanding of each person’s flawed humanity, even if — especially if — they don’t extend the same courtesy to you.

I’ve spent my life traveling back and forth between Blue and Red America. I’ve lived in Maryland and Texas, Alaska and Washington. I attended a liberal university and then enlisted into the infantry, deploying to Afghanistan. I’ve served on Democratic campaigns and at both the U.S. Chamber of Commerce Foundation and JP Morgan Chase, where I worked with the business and military communities to tackle veteran and military spouse unemployment.

I’m fortunate; this background makes it easier for me to humanize those on the other side of the aisle — and to be humbled at the randomness of my own life. We are, after all, the products of our upbringing and genetic make-up. Our parents, our childhood communities, our brain chemistry, our sex, our race — we have no control over the most influential elements of our lives.

I like to think that had I been born in Alabama into a family that loves Roy Moore, I’d still have the same ideals and perspectives I hold today — but that seems pretty unlikely. We are all the products of our genes and our experiences, nothing more and nothing less, from the moment we’re born until the moment we die. And so I’m working on learning humility before the randomness of the good fortune in my life, and compassion toward the randomness of the lives of others.

I didn't feel this way a year ago. During the 2016 campaign, I volunteered to lead the grassroots effort to engage veterans and military families for Hillary Clinton. I was also there crying with others at what would have been her victory celebration in Manhattan on that long election night.

Within minutes of waking up the morning after the election, I made the decision, with my now-fiancé, to make a move West and join her in Seattle.

As I closed down my life in D.C. over the following weeks, I, alongside many others, entered a period of depression about the future of the country, and anger — not just at President Trump, but at those who voted for him.

I had felt anger before towards public figures; never an abstract group of people. But I was furious at them all for electing a man I believe so manifestly unqualified for the presidency, the most important job in the world.

I was sure that as the president’s supporters saw him govern, they would abandon him, realizing and regretting their error. But as Seattle’s long, rainy winter — the wettest on record — turned into its long, sunny summer — the driest on record — the president’s approval rating stabilized at just under 40 percent. Trench warfare set in.

As it became apparent that neither side was going to budge, I started talking politics again with some Trump-supporting friends, including guys from my old platoon. I had mostly avoided these discussions, instead repressing irritation at anti-Hillary and pro-Trump memes in my Facebook feed. In the months since I’ve started these conversations, though, I’ve begun to understand why they love the president.

Trump shares their vision of a country in decline; "American carnage," as he memorably stated during his Inaugural address. He tells them — with the authority of the President of the United States of ‘Merica — that they don’t have to be ashamed of their heritage. Many believe he is their last, best chance to reclaim the America of their collective myth.

Relatedly, they feel that the left is seeking to diminish their role in our country’s history, enforcing constantly changing cultural norms, all through an unyielding political correctness. Yes, we have different values, but I’ve come to understand why they voted the way they did.

I don’t believe that both sides share equal responsibility in bringing about our republic’s crisis. But again, that shouldn’t matter. If you tell someone you think they’re to blame for America’s problems, they are unlikely to listen to anything else you say, no matter how much your policies might benefit the country.

We might also consider forgiveness because the human condition afflicts us all. We evolved to thrive as hunter-gatherers in the African savanna, not the world of today. And so without really understanding why, we spend our entire lives straining against the fundamental reality of our DNA. Of course we’re all screwed up. How could we not be?

This isn’t quite the same idea as the Christian concept of being born into sin, but the implication is similar: each of us is inherently flawed. So instead of resentment and bitterness toward the other side, we might search for compassion for the pain of every other human.

Humanizing others makes compassion easier. Knute Berger and Matt Mills-McKnight road-tripped across the state this summer, with Berger explaining, “it’s seemed more important than ever to get outside Puget Sound’s blue bubble.” He “came away thinking that while people make different choices, there is a ton of common ground.”

In the same spirit, Crosscut’s Lily Fowler recently authored a piece about a Muslim woman, Aneelah Afzali, and a Lutheran pastor, Rev. Terry Kyllo, who are taking a Muslim Roadshow through rural Washington. Her motivation for the journey, Afzali said, was that “we have forgotten how to recognize other human beings. We have forgotten what they are worth, what their value is, and so we’ve lost a part of our own humanity.”

All efforts to break out of our bubbles are worth trying. For those without the opportunity to travel across the Red-Blue divide, it can be as simple as reconnecting through social media with a relative or old friend from the other side of the aisle.

For better and for worse, Red and Blue America are stuck with each other for the foreseeable future. Broadly speaking, we have two paths, I believe: continue to blame the other side and fight for narrow electoral wins, with each election producing more bitterness than the last.

Or we can fight better by understanding that we all share the same human afflictions and by realizing that our opponents’ views, no matter how loathsome to us, spring from some combination of their genes and the environment they were born into.

As we enter the new year, our Cold Civil War is entering a dangerous and uncertain phase; the impending collision between President Donald Trump and Special Counsel Robert Mueller looms above us all. We're only months away from the greatest constitutional crisis since Watergate , and possibly the Civil War. Identifying our common humanity may be the only hope to reunite in the aftermath of this clash.

America is a very young country, a blink of an eye in the story of human civilization, to say nothing of our tiny role in the universe. And although it will be severely tested in 2018, America remains a place — and a set of values — worth fighting for. It’s a long shot, but forgiveness and compassion might begin to overcome the cycle of vengeance and bitterness.

I’m open to other ideas, though.