After Amtrak crash, a surreal procession as cleanup begins 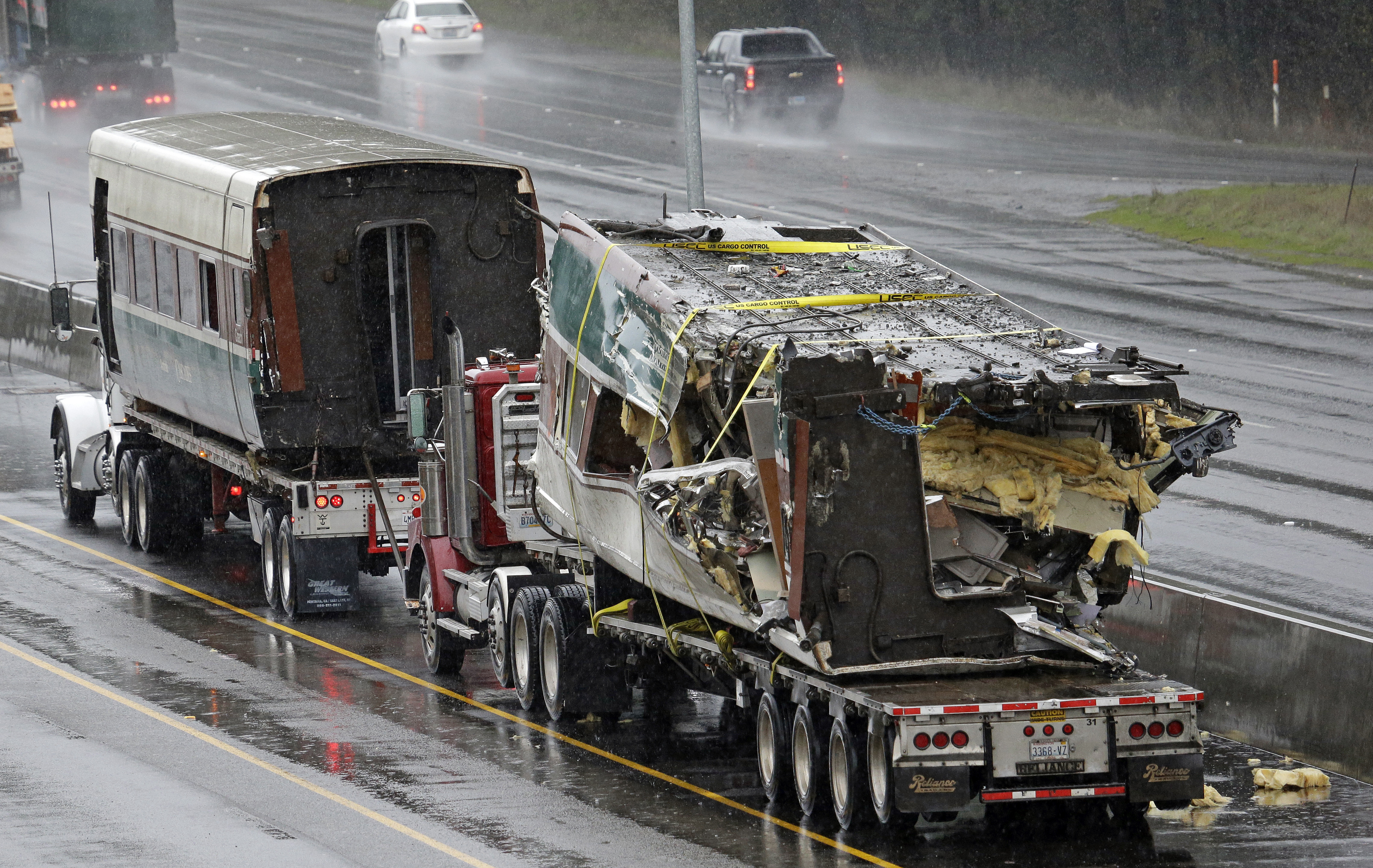 Two damaged train cars sit on flatbed trailers after being taken from the scene of an Amtrak train crash onto Interstate 5 a day earlier Tuesday, Dec. 19, 2017, in DuPont, Wash. Federal investigators say they don't yet know why the Amtrak train was traveling 50 mph over the speed limit when it derailed Monday south of Seattle. (AP Photo/Elaine Thompson)

The crushed train car sat on a flatbed truck on Interstate 5 outside of DuPont, Washington. Positioned upside down, gashes down the side as if mauled by a bear, the car was perched high enough that drivers heading north could see its insulation spilling onto the roadway, the seats sandwiched together and the windows broken out. Some drivers honked as they passed, a nod toward those working on the deadly crash from the day before.

On Tuesday, cranes plucked the Amtrak train cars from the highway, the tracks, the nearby woods, and even from mid-air, where one car had been hanging suspended off the highway overpass overnight. They landed there the night before as the train barreled through a 30-mph turn at 80-mph.

It was the first time passengers on a scheduled run had traveled this new route, one that diverted passenger trains away from the freight-heavy tracks running nearer to the water as a way to shave off delays. It was not the first time this train’s engineer had taken this curve, said a spokesperson from the National Transportation Safety Board. Why he’d succeeded during test runs, but failed on Monday is still unclear.

There were 77 passengers and seven crew members on board for the inaugural ride. Three people died, including Zack Willhoite, 35, and Jim Hamre, 61, both fierce advocates for high-speed rail. More than 100 people were injured between passengers and motorists hit by the train falling onto the freeway.

In the wind and the rain, the flatbed trucks accepted each train car, some mangled, others untouched. The trucks staged them in a line as men in vests checked their ratchet straps holding them in place and checked them again.

Tuesday morning southbound traffic began to thin at Lakewood as signs warned drivers to find a different route. It thinned even more near DuPont, which is south of Tacoma, and the site of the crash. A muffled message looped on AM radio: “This is for drivers headed south on I-5 toward Olympia,” a female voice announced. “Until further notice, southbound I-5 is closed at milepost 116 near DuPont due to a major incident.” The freeway will be closed for a while, so the message will repeat thousands of times through the night and in the following days.

Approaching DuPont, one road sign lagged behind the others: It flashed a warning that beginning Monday, Dec. 18, 14 new trains a day would pass through the city. For now, Amtrak is back to the old route.

Some towns along the I-5 corridor, like Lakewood, have worried these new trains would endanger pedestrians and cars. But at the DuPont 76 station near the exit ramp, the three women staffing the counter had anticipated it with some excitement or, at least, curiosity. The station's window faces east toward the new, long-rail tracks welded and would offer a 45-second show as the trains flashed by at 79 mph.

But on Monday, only the one train passed, briefly delaying one employee on the way to work, before it derailed down the road.

Around 11 a.m. Tuesday, five flatbed trucks, each holding its own train car, left the scene as news cameras recorded their departure. State troopers and utility trucks formed a motorcade. To merge onto northbound I-5, the caravan detoured through town, parading past the suburban city’s residents, flashing their headlights like at a funeral procession.

Each car again passed the 76 gas station in DuPont, but this time not on tracks. And the same women who were there Monday morning for its inaugural route again watched. As the most damaged car drove by — the one with the bear claw streaks — one of the women posted the image to Facebook. “Such a sad sight to see,” she wrote. “They closed off the exits to carry the derailed passenger trains through DuPont. The story sadden[s] me enough, but seeing this was even sadder. My heart and prayers goes out to all involved. Passengers, first responders and anyone who had to witness this horrific accident scene. This breaks my heart.”

The train cars will disappear for some time now, to be held at an undisclosed location at Joint Base Lewis-McChord, according to a Washington State Patrol spokesperson. They will be in the custody of the National Transportation Safety Board investigators, who will recreate the crash and pick apart what happened.

By Tuesday evening, there were still four cars and the 270,000-pound locomotive left to move, a WSDOT spokesperson told King 5's Chris Daniels, one more of which will clear by Wednesday morning.

As customers filed through the 76 station, buying sodas and filling out lottery tickets, every conversation was about the accident. Unlike, say, a shooting, tragedy was delivered here from elsewhere; the crash was outside of town and no one from DuPont was killed aboard the train.

Still, sadness lingered even after the procession cleared. "All those people were probably so happy," said one of the women behind the counter, who asked her name not be used as an employee of the gas station. "They were probably getting ready for the holidays."