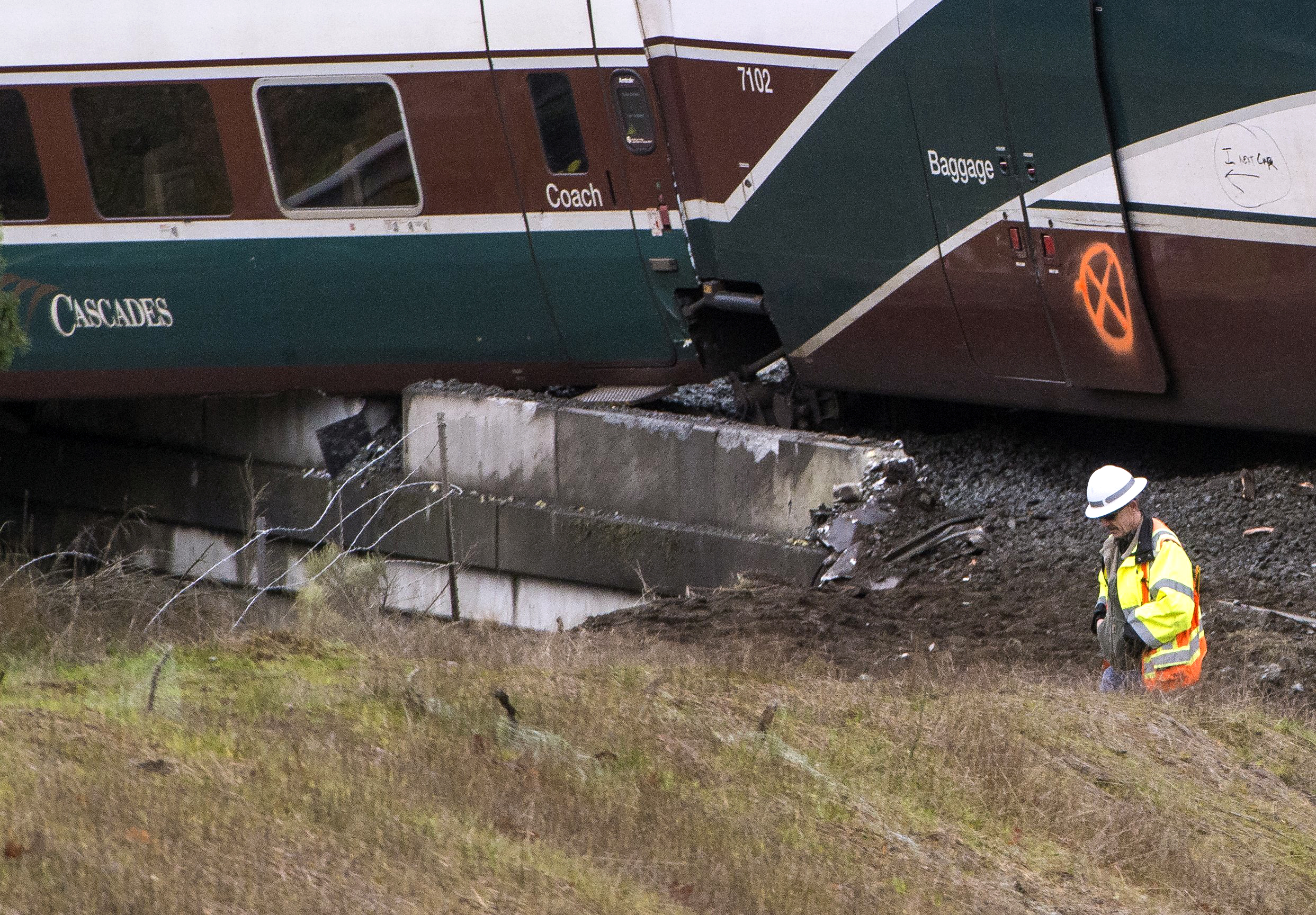 Emergency crews respond after an Amtrak train derailed Dec. 18, 2017, in DuPont, Wash. The Amtrak train making the first-ever run along a faster new route hurtled off the overpass Monday near Tacoma and spilled some of its cars onto the highway below, killing several people, authorities said. (Joshua Bessex/The News Tribune via AP)

Eleven months before Monday's derailment of an Amtrak train on its inaugural trip east of Puget Sound, Lakewood Deputy Mayor Jason Whalen had a question for David Smelser, the rail and freight program manager for Washington State Department of Transportation (WSDOT): “What’s your biggest worry that kind of keeps you up at night with regard to going live with this?”

Smelser had just finished a presentation on the $181 million project to Whalen and his colleagues on the Lakewood City Council, a town long skeptical of welcoming a new train route at its doorstep. Speaking with a plodding caution through his PowerPoint, Smelser laid out the tests being conducted before the route would go live, they hoped, in October 2017.

Among those tests, the WSDOT official explained, was for something called Positive Train Control (PTC), a computer-automated system built to prevent collisions or speed-related derailments. PTC would be required on all rail projects as of December 2018, under the Rail Safety Improvement Act signed in 2008 by then-President George Bush, Smelser told the Lakewood council. At that January meeting, Smelser said PTC was being installed. “PTC will go in in the forthcoming months, before we start service,” he said.

Responding to Whalen’s question about what worried him, Smelser appeared confident at first on Lakewood's video recording of the meeting. “This project is going well and I’m not terribly concerned about it,” he said.

But after a few moments he offered that, if he had one concern, it was the installation of the PTC system. “The most worrisome is the PTC testing, the positive train control test,” he said. “That just is very technology intensive and there’s a lot of things that can take time there. So it’s a matter of getting it done. It’s not a matter of it working or not working in the end, it’s just a matter of getting there.”

On Monday, an Amtrak train derailed off a bridge south of Lakewood onto I-5 killing at least three people, according to officials' early announcement.

The PTC system was installed but not yet activated as testing is ongoing, a WSDOT spokesperson confirmed to Crosscut.

As the National Transportation Safety Board (NTSB) investigates, it's unclear whether PTC would have prevented an accident. However, speed will be among the issues the NTSB looks into. The speed limit on the curve where the train derailed was 30 mph, according to officials with Amtrak and the state. But an eyewitness told the Seattle Times the train was moving much faster than that. And KING 5 reported that Amtrak data shows the train was traveling up to 80 mph, although state officials have not confirmed that. Late Monday night, National Transportation Safety Board officials verified the train was going 80 mph in a 30 mph zone.

Monday's train trip inaugurated travel on the so-called Point Defiance Bypass, a detour route east of the old tracks with its views of Puget Sound. The Point Defiance Bypass had just opened for passenger train traffic after years of planning as well as pushback. The new route was built to redirect trains away from the bulk of freight traffic that can clog the more scenic path and to shave six minutes off the path between Portland and Seattle.

The tracks are officially owned by Sound Transit under an agreement with WSDOT. Sound Transit did not respond to calls for comment.

The rails laid along the Point Defiance Bypass were welded together, a contrast to the jointed pieces that make the clack-clack sound that often follows trains. Not only are these quieter and more efficient tracks, but they were meant to be safer as well. In a 2009 document responding to concerns about the bypass out of Lakewood and Tillicum, WSDOT wrote, “Once the new tracks are built with welded rail, today’s freight trains will be less likely to derail and block any crossing.”

Concerns have been raised, however, about the long pieces of welded tracks buckling. These tracks have also been blamed for several derailments and come with explicit warnings that they need “good maintenance practices,” according to the National Railroad Construction and Maintenance Association.

Most of the tracks had already been laid out on the bypass last January when Smelser briefed the Lakewood council. But unlike laying a road, he explained, train tracks are more fickle. The rocks beneath the rails — known as track ballast — need tamping that cannot be achieved by anything other than the train itself. And so, a train travels back and forth, as slowly as 10 mph at first, building up speed until the ground beneath it is solid and it can comfortably travel the 79 mph.

For Bruce Agnew, director of the Cascadia Center, which promotes high-speed rail in the region, all of this recent work should mean the route is at its safest. "This accident is particularly perplexing because there was a brand new track and the [route] had been tested," he said.

After the tracks are deemed stable, then come the signal systems. The first is Centralized Train Control signals, which are controlled out of one central station. This has long been the standard for controlling traffic.

Then come tests of the Positive Train Control system, the technology receiving the most scrutiny following Monday's crash as speculation about the speed of the train has run rampant.

On a national level, authorities were testing Positive Train Control as early as the late 1980s. But Congress didn’t pass the Rail Safety Improvement Act, which calls for the installation of the technology, until 2008. Congress passed the legislation after the Chatsworth train collision, an accident in the Los Angeles area that killed 25 people and injured 135. That accident, during an afternoon commute, involved a Metrolink passenger train and a Union Pacific freight train. It occurred on a sharp curve. An investigation by the NTSB found that one of the engineers was texting.

The technology is meant to make all passenger trains, as well as freight trains with certain hazardous materials, safer. The NTSB for it's part has strongly advocated for its implementation. "We have called for a system like PTC for more than 45 years, yet it still has not been fully implemented in our commuter, intercity, and freight railroads," reads an NTSB fact-sheet.

Positive Train Control can prevent four categories of accidents, according to Steve Ditmeyer, a professor at the University of Delaware, and a former administrator at the Federal Railroad Administration.

The technology can prevent accidents caused by speeding, such as the 2015 accident in Philadelphia, when a distracted engineer accelerated to more than twice the speed limit.

“If the train was indeed exceeding the authorized speed, Positive Train Control would have prevented the accident,” Ditmeyer said, referring to the reports that the Amtrak train in Washington state was going much faster than it should have been.

Positive Train Control, however, would likely not have prevented an accident caused by a train hitting an object on a track.

The initial deadline for the installation of the technology was the end of 2015. But just as the deadline loomed, Congress granted an extension. Currently, trains aren't required to operate with the technology until 2018 and even then, according to Ditmeyer, another extension, until the end of 2020, can be requested.

Ditmeyer says part of the problem is that while freight trains are profitable, passenger trains, such as Sound Transit and Amtrak, are not as financially sound. Although the Federal Railroad Administration and the Federal Transit Administration have provided some financial assistance, other sources, such as funding from individual states, are expected to cover the bulk of the cost.

The time it takes to install the technology varies depending on the complexity of the project and how many miles the railroad tracks stretch, Ditmeyer said — anywhere from 6 months to a year may be needed to prepare.

According to the Association of American Railroads, over 15,000 route miles of track are already in PTC operation. To date, freight railroads have spent $8 billion on the installation of PTC technology, and the estimated total cost for the freight lines for PTC development and deployment is $10.6 billion. The cost of PTC installation for U.S. passenger railroads is estimated at an additional $3.5 billion.

The NTSB did not immediately give any timeline for its investigation, but it can often take a year for findings to be issued. Meantime, southbound I-5 will remain closed into Tuesday, according to a spokesperson from the Washington State Patrol.