One last 'dark-on-dark' in old Seattle 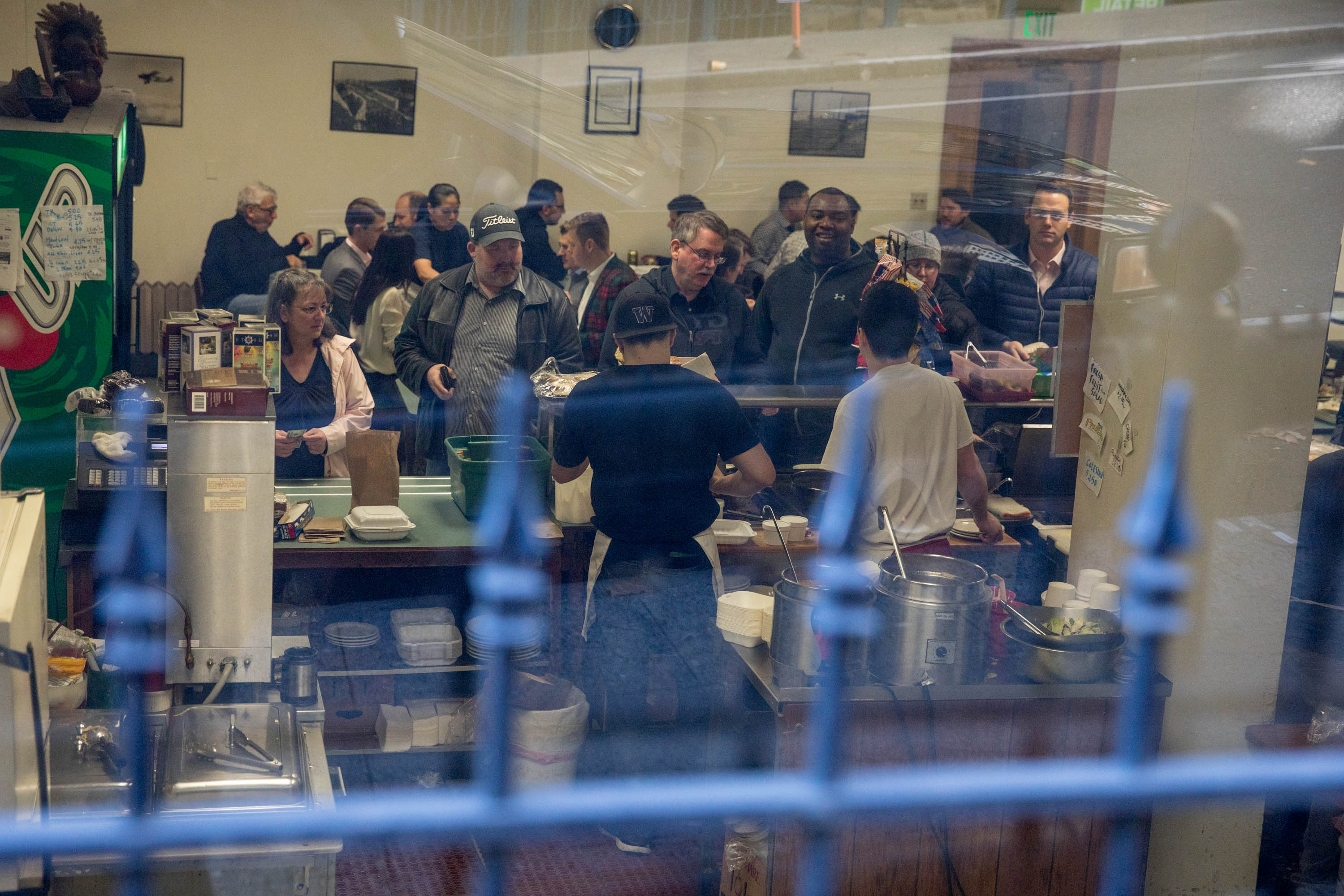 The line seemed as long as one to view Princess Diana’s coffin. It wound halfway around the block on Second Avenue, down into a basement, curled through a sunken bar and back up to a plain dining room. I’ve sworn I would never stand in line and wait half an hour for a sandwich. But this was special.

It was a celebratory farewell. People were gathering for a last meal at Bakeman’s, the downtown restaurant that has served Seattle since 1970. Think about that for a moment. What an incredible survivor it has been.

In Seattle in 1970, people weren’t starting restaurants. It was the middle of the Boeing recession. Seattleites were turning out lights. There was social unrest; unemployment was spiking up to 13 percent. In 1970, Seattle opened 34 food banks. If dining establishments are risky business ventures, what about a downtown lunch counter in a Pioneer Square basement during a bust?

It worked, though, and has lasted 47 years. It closes Dec. 22 because owner Jason Wang is retiring.

Bakeman’s is venerable for such places. It will be much missed and tributes have flowed in from writers and patrons, none better than the enormous snaking line out the door on one of its last days. People of all ages, some bringing their kids so they can tell their kids, “I remember Bakeman’s.” The long line I was in was abuzz — it probably had more folks in it than the restaurant usually serves in a week.

Restaurants come and go. Why does a joint like Bakeman’s matter?

We live in an age where authenticity is hard to come by. Bakeman’s was what it was, and purely what it was. Not neo, not retro, not pan-this or nouvelle that. It was a diner without irony or shtick, complete with a cranky proprietor who barked at the inattentive and indecisive. Too bad he’s not in charge of Seattle traffic.

If its last days are an example, and they are, it was one of those Seattle places without pretense, it served all races and classes and types, the suits and the cubicle hobbits. Lunch was cheap: a turkey sandwich was $5, a meatloaf $4.95. Served fast. Add a pickle, a slice of pie, a cup of turkey noodle soup and it was still a bargain.

The spirit of the 1970s recession lived on in its prices and no-nonsense functionality. Believe it or not, Seattle used to be a town with much less bullshit. This wasn’t yuppie Seattle of the ‘80s, Grunge city of the ‘90s, Amazonia of the 2010s. It wasn’t Ivar’s quirky or Canlis classy. It was an egalitarian spot where fresh roasted turkey or meatloaf on plain bread with a piece of apple pie was a reward one could give oneself after hours spent in downtown offices.

Choice of seating was an open dining room with small tables or a recessed onetime bar area with dim lighting where you could hide out in a booth. The clientele included many government workers, council members, bureaucrats, city and courthouse staffers — people known to journalists as “sources.” Many a meal was had while talking policy, building permits, legislation, what was going on at City Hall or the King County council. Even reporters could afford to buy a lunch without putting it on the expense account. Story leads could be had by eavesdropping on an adjacent table; confidential conversations could be had in the dark corners downstairs.

I talked with folks about city process there, but you had to learn the Bakeman’s process, too. How to order: a dark meat-only turkey sandwich on whole wheat bread was a “dark on dark.” You needed to specify what you wanted or didn’t want (Hold the cranberry sauce!) or you might be scolded for being slow.

On my last visit to Bakeman’s this week, there was no letdown of standards — though the meatloaf was sold out before noon. Still, I was pleased to have the familiar bald sandwich man bark at me for being distracted. “What? What?” he shouted, wanting my order.

Once spoken, sandwiches appeared with miraculous speed produced by a pre-industrial assembly-line efficiency of experienced human hands that scooped the meat and lettuce onto bread with mayo, sliced the sandwich in two halves on a plate and handed it to you in seconds. To my delight, two young women in front of me were balled out at the cash register for not saying fast enough that they wanted some of their lunch packed to-go. This was the full Bakeman’s experience where customers and servers operated with a basic standard of “get ‘er done.”

The old Seattle style used to have a kind of brisk cleanliness and no-nonsense approach to it. Jonathan Raban has referred to that culture as a “Scandoasian” ethic — Ikea-like pragmatism matched to a work ethic. Efficient. Straightforward. Practical. Affordable. Bakeman’s was a great lunch spot, but also a kind of role model for what the city could be, used to be, but isn’t anymore. I miss that city as much as I’ll miss my dark-on-darks.