Best of 2017: I’m a Republican, and I’m joining the protests 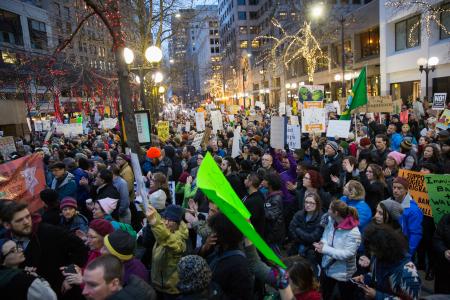 On Saturday morning over coffee I read a summary of Donald Trump’s executive order regarding refugees and immigrants. Then I read the order itself. And then I read it again.

And then I went online and my wife and I became members of the American Civil Liberties Union. Sunday night, for the first time in our lives, we became protestors, along with thousands of other Americans, joining a rally in Seattle’s Westlake Park.

Why would a lifelong Republican, who generally chafes at such activity, do such things? I feel guilty saying this, because millions of our neighbors are feeling real fear as a result of Trump’s words and deeds, but I did it because of what I see happening in my party.

A bit of context: In the fall of 2015, after the terrorist attacks in Paris, many Republicans — including me — said we should stop admitting refugees from ISIS dominated areas, mainly Syria and Iraq, until the FBI could adequately vet them and guarantee that they weren’t a threat.

But many Trump supporters want to go much farther and permanently ban Muslims from entering the U.S. — and with his executive order, Trump has taken Step 1 toward doing just that.

First, his order temporarily bans all refugees, not just those from ISIS dominated areas. Second, he temporarily bans Muslims from seven countries, and initiates a process to add more countries to that list. Third, and most importantly, he directs his administration to develop a permanent new screening procedure for all immigrants, not just refugees.

And this is the policy intent that will drive that new procedure:

In order to protect Americans, the United States must ensure that those admitted to this country do not bear hostile attitudes toward it and its founding principles. The United States cannot, and should not, admit those who do not support the Constitution, or those who would place violent ideologies over American law.

This language sounds benign until you consider that many of Trump’s ‘alt-right’ supporters believe that Islam itself is a “violent ideology,” and that all Muslims want to place Islam and Sharia law “over American law.”

I have heard and read this over and over again from “conservatives.” Trump himself has said as much.

This is nonsense, of course. A generation ago religious bigots made the same sorts of claims about my faith, Roman Catholicism. And yet many of Trump’s supporters seem to be standing behind him. I have even encountered people who want to deport the Muslims who are already here.

Where does my party stand on the issue? During the campaign, virtually every Republican leader said they opposed Trump’s proposal for a Muslim ban. Some now have offered tepid opposition to the executive order, but so far no one in the GOP is talking about doing anything to really stop this new policy.

In a brilliant article in The Atlantic, Eliot Cohen, an expert on the Middle East who served as a counselor for the State Department under George W. Bush and now directs the Strategic Studies Program at the School of International Studies at Johns Hopkins University, describes precisely what life is like now for those of us who have spent our careers toiling in the “conservative movement.” It is, Cohen says, a defining moment:

For the community of conservative thinkers and experts, and more importantly, conservative politicians, this is a testing time. Either you stand up for your principles and for what you know is decent behavior, or you go down, if not now, then years from now, as a coward or opportunist. Your reputation will never recover, nor should it. … The biggest split will be between those who draw a line and the power-sick, whose longing to have access to power, or influence it, or indeed to wield it themselves, causes them to fatally compromise their values. For many more it will be a split between those obsessed with anxiety, hatred, and resentment, and those who can hear Lincoln’s call to the better angels of our nature, whose America is not replete with carnage, but a city on a hill.

Trump made his views crystal clear during the campaign. Since the election, many people, especially Republicans, have tried to pacify themselves by hoping that he didn’t mean what he said, and won’t do what he promised to do. Well, it’s time to wake up and face reality: He meant every word of it, and it is anathema to everything the modern Reaganite GOP has stood for.

The GOP fought hard for NAFTA and the Trans Pacific Partnership. Trump has killed the TPP and has begun the process to kill NAFTA.

Trump continues to flirt with the idea of lifting the sanctions against Russia and developing a partnership with Putin’s fascist regime.

And now he is on his way to instating the Muslim ban he promised during the campaign, which is a violation of the spirit, if not the letter of the First and 14th amendments to the U.S. Constitution.

On issue after issue, Donald Trump is governing as Donald Trump. All of us, but especially Republicans, need to answer the question: What are you going to do about it?