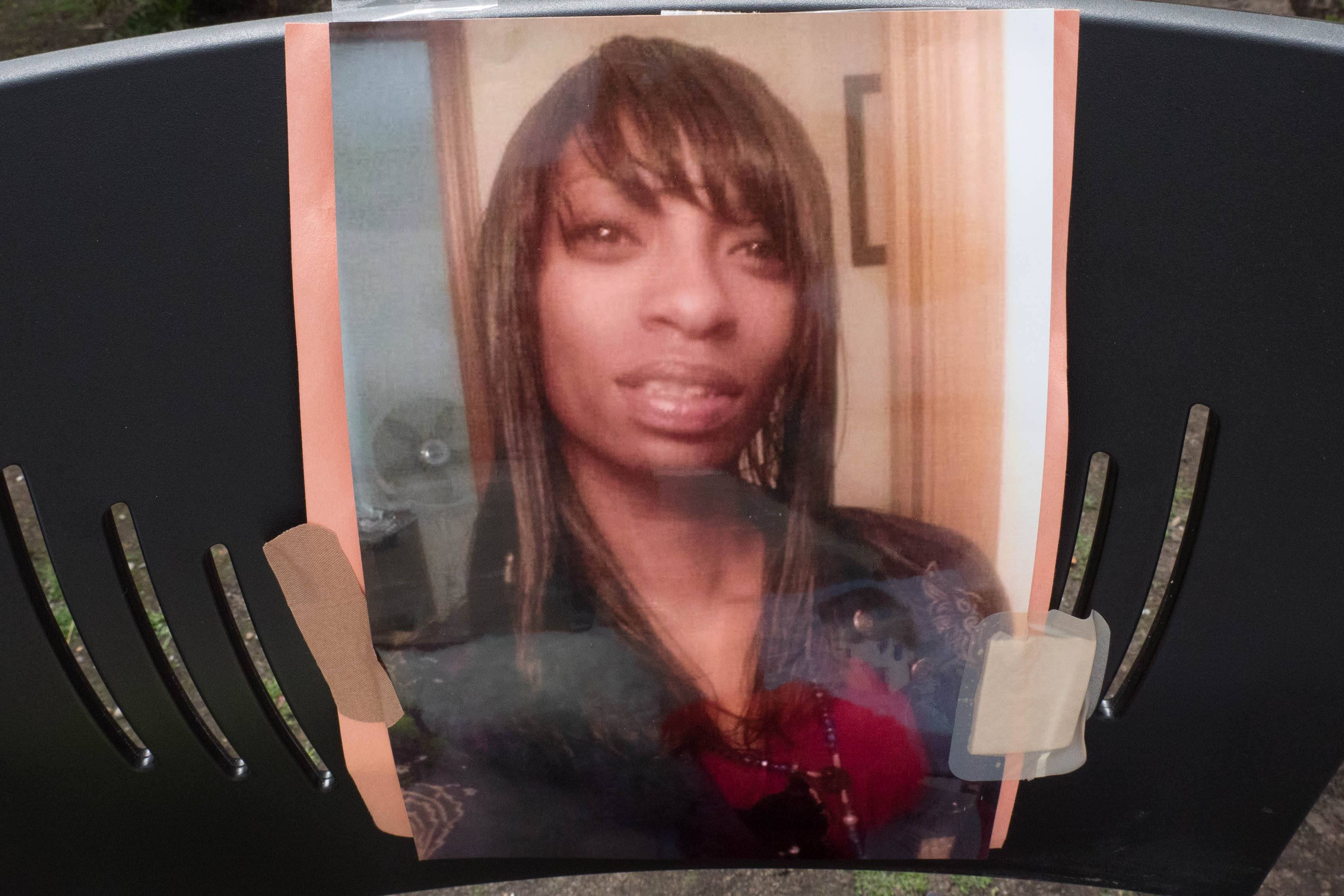 An image of Charleena Lyles is seen at the site of a vigil in front of Brettler Family Place 3, where she was killed by Seattle Police Department officers.

The room was as tense as any family get-together. It’s not always that comfortable to hang with relatives, let alone when the occasion is to remember a family member horrifically killed.

Late one recent Friday night, Charleena Lyles’ relatives gathered at a small storefront church on Martin Luther King Jr. Way in Seattle’s Rainier Valley. The house of worship, The Way of Holiness Church of God in Christ, was a place Lyles visited occasionally. Inside, more than a dozen family members — sisters, cousins, nieces — filled several pews. As Lyles’ newly orphaned children played by the kitchen, relatives talked about what they saw as the gross mischaracterization of Lyles after last month’s fatal shooting by Seattle police.

"Anybody who has dealt with domestic violence or had a hard life and struggled, they're going to be affected mentally. I don't think it's fair that we keep saying she's crazy," said Nakeya Isabell, Lyles’ cousin. A more accurate depiction, relatives said, would acknowledge Lyles’ struggles but also recognize she was “a woman taking care of her babies the best way she knew how."

Relatives described Lyles as kind, positive and “a giver.” Others emphasized her physical attributes — petite, attractive. Thirty-year-old Lyles was African American, 5’4’’, 110 pounds with brown eyes, according to court records.

"I used to call her Bambi because she had long eyelashes," Isabell said.

But Lyles' life wasn't easy. Her mother died when she was a teenager, according to The Seattle Times. Previous boyfriends had been abusive, family members said.

Court records show Lyles filed for a restraining order last summer after her former partner, Franklin Camphor, who she described as the “father of my youngest children,” hit her with a baby bottle, struck her on the head and shattered the back window of her car, where all four kids had been sitting.

Lyles told the court Camphor had been violent for at least four years out of the eight years they had been together and was known to punch holes in walls, even hitting her while she was pregnant. “I feel so scared for my safety, and I just got out of the hospital from having our 6-days-old baby boy, and I had a c-section. I think he ripped my stitches open,” she wrote in her June 2nd petition for an order for protection. She ended by noting that she “didn’t see him changing.” She asked the court for help.

It wasn’t the first time Lyles asked the system for assistance.

Family members said Lyles had a hard time finding an affordable apartment in Seattle. She called 211, a number King County residents can call for support. In 2015, under the guidance of Catholic Community Services, Lyles was referred to Solid Ground, an antipoverty group that provides permanent housing to vulnerable populations. After being evaluated, Lyles moved into Brettler Family Place in Seattle's Sand Point area on Nov. 4. She lived in a third-floor apartment with her four children.

Three buildings make up the Brettler Family Place complex. Seventy-four units and home to 242 people, according to Mike Buchman, communications director for Solid Ground. Two case managers work with all the residents, helping identify needs and referring them to various services, like financial-skills coaching and legal help with public benefits. Two mental health counselors are also available, but they serve both the Brettler families and residents who live in other nearby Solid Ground units.

Like with much of the housing made available to vulnerable populations, Buchman says, Brettler Family Place's philosophy is that "people know what they need and know how to ask for help." Experts, however, caution that it can be difficult to evaluate whether — or when — someone is in need of more direct outreach. In addition, caseworkers traditionally work with large caseloads for little pay.

According to family members, Lyles didn’t feel safe at Brettler Family Place. Because there was drug use and fighting among the neighbors, Lyles asked to be moved to a different site. Buchman said he couldn’t comment on Lyles’ specific situation due to privacy concerns but that in the aftermath of Lyles’ death, Solid Ground plans to “undergo a thorough assessment about our services here and work to identify ways we and the care systems we engage with can provide the protection and support everyone deserves."

Despite her complaints, court records show Lyles had received some form of mental help. In June 2016, Lyles was sent to Sound Mental Health after an altercation with her sister. A May 27, 2017 letter from Solid Ground indicates she and her four children had been meeting weekly with a child and family therapist, The Seattle Times reported.

But if some sense of normalcy was returning, it unraveled on June 5 after a domestic dispute with her former partner led Lyles to call the police. On that day less than two weeks before her death, as has been widely reported, Lyles allegedly armed herself with scissors, referred to the officers who had responded to the call as “devils,” “members of the KKK,” and spoke about wanting to “morph into a wolf.” Seattle police officers drew guns. The Seattle police report says Lyles’ family acknowledged she had undergone a “recent sudden and rapid decline in her mental health.”

“Lyles’ family is concerned for her and they have a strong desire to stabilize her mental health condition before it gets worse,” the report reads.

The incident led to Lyles’ arrest for harassment and obstruction charges. In recordings of Seattle Municipal Court hearings, public defender Ashwin Kumar can be heard objecting to how police responded. “She calls for help and she gets arrested. We think that’s certainly a big problem,” Kumar says. Kumar also says officers pulling out guns “doesn’t seem like a healthy response at all for someone who calls for help.” Although the judge is clearly concerned about Lyles’ mental stability, she recognizes that her behavior seems "like a crisis or a break" from her typical demeanor. "But the fact that she's engaged in mental health treatment and this still happened causes me extreme concern," the judge continued.

In another court hearing, Lyles can be faintly heard answering the judge’s questions. Lyles' representative and the judge discuss her past drug use and treatment at the behavioral health care center Valley Cities. Because Lyles was pregnant at the time, she was not on medication.

Less than two weeks later, Seattle police returned to Lyles’ apartment again. And because of the earlier incident, she had already been flagged in the system as someone who was potentially dangerous. Family members argue Officers Steven McNew and Jason Anderson, who responded the morning of June 18 to a suspected burglary call, had preconceived notions about who Lyles was. And seemed wholly unprepared for the confrontation. Seattle police shot her seven times, twice in the back, according to the family. She died at her apartment.

In interviews released after her death, the two officers described Lyles’ apartment as chaotic, with “meatloaf that might have been 3 weeks old” left half-eaten on the counter and “kids rolling around.” Lyles had allegedly armed herself with knives, warning officers to “get ready, motherfuckers.” Police officers said after shooting Lyles, they scrambled to contain the three children in the apartment at the time, including “this little baby on top of her” after she had fallen to the ground.

Relatives expressed skepticism about what, if anything, Lyles had armed herself with because, unlike in the previous episode, McNew and Anderson never asked that a weapon be dropped but simply demanded that she “get back.” They also expressed outrage that officers had not used a more non-lethal form of force, or referred her to King County Designated Mental Health professionals who could have ensured Lyles was evaluated. Both McNew and Anderson are white.

Officer Anderson has said he received training to carry a Taser but was not carrying the stun gun at the time of the shooting. According to Seattle police policy, all officers trained to carry Tasers are required to carry it on every shift.

The police investigation into the officers' conduct is ongoing.

Meanwhile, since the shooting, family and community members have railed against the police in public forums. They’ve grieved Lyles at public vigils. On this evening inside the South End church, it was time for a pastor — Lyles' cousin — to speak out.

Pastor Kenny Isabell said police shootings have caused African Americans to feel hesitant about calling the police, even when they are in need of aid.

"You've been doing it to black men forever but now you're doing it to our women. You're killing our women,” Isabell said. “I'm scared every time the phone rings ... I always fear the worst now because we're walking on egg shells."

But regarding Lyles' shooting death, family members were confident justice would ultimately prevail.

"We're going to continue to remind them of what they did to Charleena and I can guarantee this family, this family here, will never stop, never," declared family spokesman Andre Taylor, whose own brother was killed by police last year.