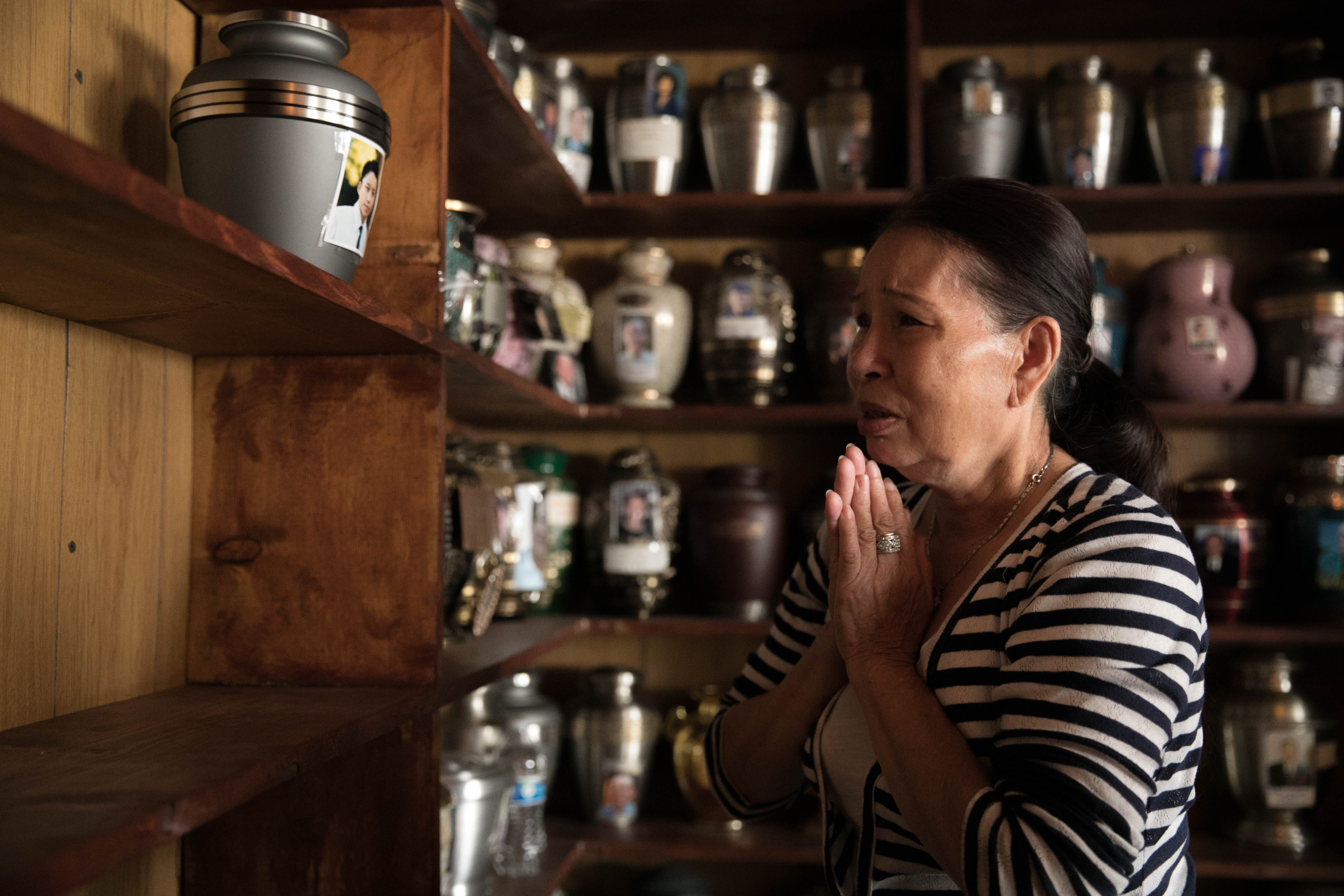 Kim Le mourns her grandson Tommy Le in front of his urn of ashes at Co Lam Pagoda Buddhist Temple in Seattle on Sunday, August 6, 2017. The 20-year-old Vietnamese-American man was shot and killed by King County Sheriff's department officers in Burien, a nearby suburb of Seattle, on June 13.

As Buddhist monks scurried about preparing for a morning service at Co Lam Pagoda in Seattle’s Rainier Valley, members of the family began to ready themselves for Le’s ceremony. He was, they say, kind, gentle and someone who “wouldn’t have harmed anyone, not even an insect.”

One by one, his father, mother, aunts, grandmother and cousin walked up silently to his gray urn, which was kept in the monks’ small quarters next to the pagoda, one of the biggest Vietnamese Buddhist temples in Washington State.

Le's grandmother cried as she caressed the vase holding Le's ashes. Other family members lit incense and said a prayer. Inside the small, cramped room, offerings of food laid before a statue of Buddha, who, according to religious tradition, achieved enlightenment — knowledge and practices on how to end suffering. Le’s spirit, family members believed, would once again inhabit human form.

What led to Le’s June 13 shooting death is still shrouded in unknowns. According to the King County Sheriff’s Office, three King County deputies arrived in Burien after authorities received several 911 calls reporting that an Asian man in the neighborhood was threatening others with a knife and that shots had been fired. A resident had apparently fired a warning shot after a barefoot Le had stabbed at his door with an object in his hand, “all the while yelling that he was ‘The Creator.'"

When deputies confronted Le, police say he refused orders to drop what they believed was a knife. They fired their tasers but to no effect. A deputy fatally shot Le after he reportedly moved toward them. Le died at Harborview Medical Center the day before he was scheduled to graduate from Career Link, an alternative high school completion program at South Seattle College. At the graduation ceremony, when Le’s photo flashed on screen during a slideshow, his classmates cheered, unaware that Le had just been killed.

A week later, the Sheriff’s Office reported Le had been holding a pen, not a knife, when he was shot. The shooting is currently under investigation by the sheriff’s Major Crimes Unit and that investigation will be reviewed by the FBI and the U.S. Attorney’s Office. Two witnesses, according to the Sheriff’s department spokesperson, have identified Le as the man who had been behaving erratically. Two knives have also been recovered from Le’s home. “Detectives believe one or the other was the one involved in the assault,” said spokesperson Sergeant Cindi West.

Until now, Le’s shooting has not triggered widespread public protests or even news conferences. Buddhist tradition requires families to remain relatively quiet while in mourning.  Vietnamese community members say the lack of pushback is also due to an emphasis on other priorities and a respect for authority.

“The Asian-American community here and the Asian refugee community is a little more muted and that’s stemming from the parents' generation,” said Jefferey Vu, an engineer at Boeing who works with Le's uncle. “Their priority is surviving, making money, education.”

“Deference to authority, that plays some role,” Vu continued. “Police harassment is definitely an issue, but this national movement around police shootings is new to us.” Vu said Le's family, as well as other members of the community, might not know enough about how to navigate the system and power and organize protests.

Leaders within the Vietnamese community did hold a public forum in July, where King County Sheriff John Urquhart speculated Le might have dropped a knife and then picked up a pen. Those attending the forum balked at the theory. Speaking through an interpreter, Le’s father, Hoai Le, a landscaper, simply said: "There's no pain like losing my son."

At the funeral, a framed photograph of Le — crisp white button-up shirt, chin resting on one hand — stood surrounded by photos of dozens of others who had passed on to the next life. Le’s family said the ceremony was not about focusing on just one individual but about acknowledging an entire spiritual community. Surrounded by offerings of flowers and food, loved ones stared pensively at Le’s photo.

Le's family then filed into the temple’s main room and knelt for a two-hour ceremony, which was filled with others who had also lost someone. Those who had lost an elder wrapped their heads in a white cloth — a sign of respect. Le's father, his hands in prayer, appeared deep in thought.

"He was not a violent kid," said Uyen Le, his aunt. "Everyone was really shocked to hear this happened to him."

When it was over, relatives packed up Le’s photo, planning to set up altars for him in two different houses. On the 100th day after his death, the family will return to the temple with the photo to hold one more ceremony.

Le enjoyed chess, reading and gardening with his grandma, his family recalled. He dreamed of becoming a firefighter, but was also interested in physics and welding. He promised his grandmother that when he made money one day, he would buy her a house.

Said Xuyen Le, an aunt: “If he were still alive, he would want to take care of grandma.”