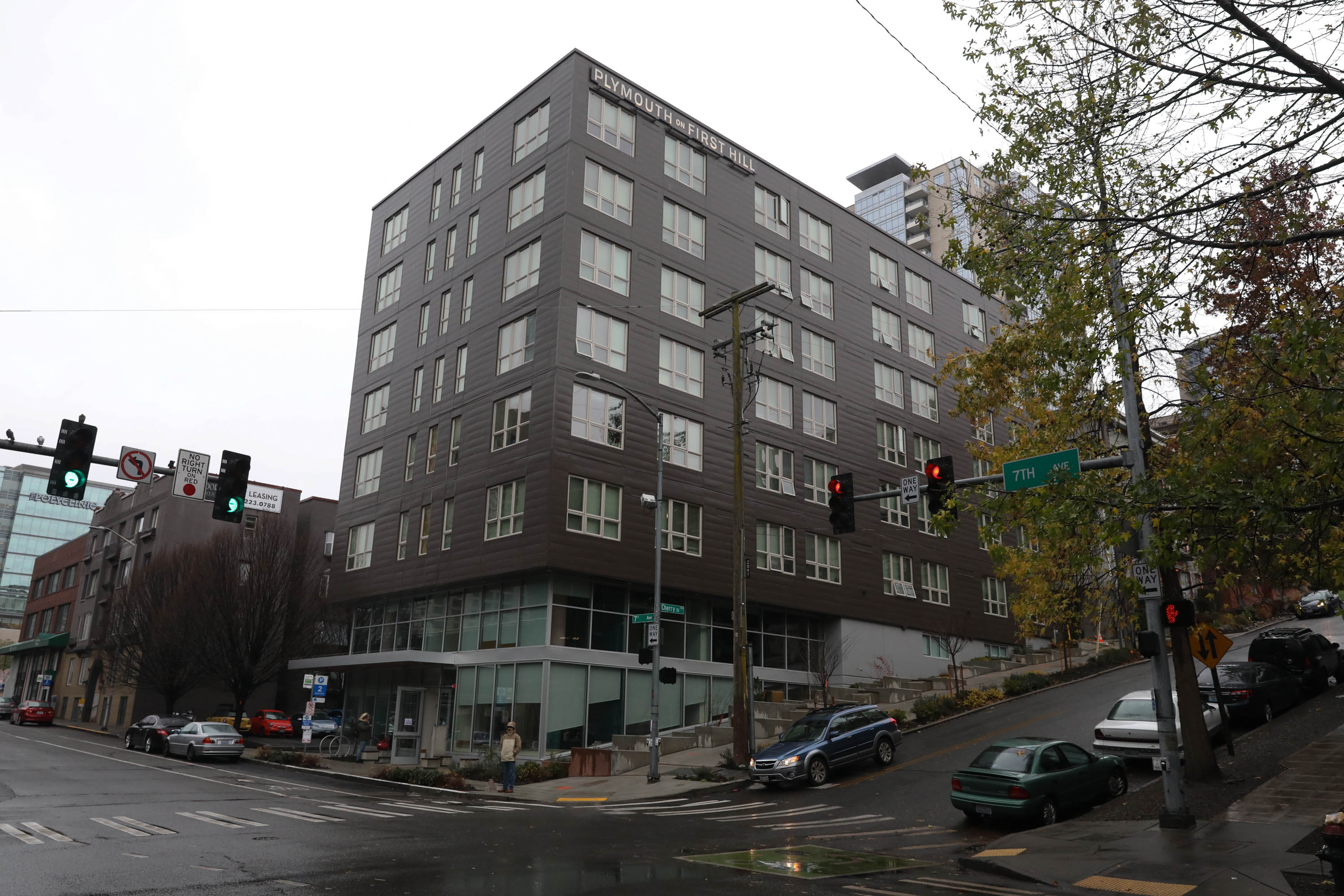 Affordable apartments were built this past year in First Hill by Plymouth Housing Group.

On cold nights in a homeless encampment, Shari Wade used to snatch the hot rocks left behind after a fire, wrap them in a blanket and tuck them into her bedding to stay warm. After growing up in the foster care system, Wade had made what she called “several bad choices” that ended in her arrest. Criminal record in tow, housing was suddenly out of reach as landlords turned her away, which landed her on the streets.

So when she found affordable housing through Pioneer Human Services, the “hope and joy” she felt was “indescribable.”

“I know securing my housing was 90 percent of what healed me, mentally, physically and spiritually,” she said Monday. She now works for a real-estate company and hopes to attend college.

At a press conference outside the Filipino Community Center in South Seattle on Monday, Mayor Jenny Durkan unveiled plans for $100 million in investments into new and preserved affordable housing, the sort that can help people like Wade.

The investments will fund the construction of nine new buildings that will include 896 apartments for rent as well as the building of 26 homes for first-time homebuyers. The money will also go toward preserving four apartment buildings, including 535 apartments.

The bulk of the funding was predictable, approved by either voters or the Seattle City Council in the last two years. There’s $29 million from affordable housing bonds approved by the council in November 2016; about $2 million comes from the sale of surplus land and there's another $2 million from the federal government. The rest is some combination of funding from Seattle’s 2016 housing tax increase and proceeds from the city’s incentive zoning program, which allows developers to build larger structures if they pay into an affordable-housing fund.

The city will farm out the construction and preservation of the new units to partner organizations around Seattle, scattering the projects across town. The Interim Community Development Association will build a place named for  the late Robert “Uncle Bob” Santos in the Chinatown/International District. Mercy Housing will build a place in the Mount Baker neighborhood. Pioneer Human Services will construct 90 apartments in Belltown. The Filipino Community of Seattle will soon see 94 apartments built near its community center. And the list goes on.

The work of finding money to build these units occurred before Durkan took office, but announcing the projects and partnerships afforded her an early opportunity to offer Seattle a small pressure release on the city’s housing crisis. “Without a doubt one of the greatest challenges the City of Seattle faces is the issue of affordability,” she said.

Although rent hikes have slowed slightly in recent months as a record number of new apartments have come online, Seattle’s rate of rent increases nevertheless consistently tops the country. In September, the average rent for a two-bedroom apartment in the city topped $2,000 for the first time.

At the same time, the homelessness crisis has not shown signs of receding. And longtime residents of Seattle continue to find themselves squeezed out, especially in Seattle’s most diverse neighborhoods like the Central District and Rainier Valley.

The amount the city has committed to housing has grown enormously in recent years. In 2016, the Office of Housing’s budget was $40 million. That number jumped to $97 million for 2017.

Still, some don’t see that as enough. In 2015, a group calling itself the Community Housing Caucus, which included Councilmember Kshama Sawant, called on the city to bond for $500 million worth of public housing — essentially using the city’s credit card to build housing now.

The city council never came close to allotting that level of funding, although Councilmember Lisa Herbold did secure the $29 million in bonding, which the city will need to pay back. But even that amount concerned some who worry that the city’s boom-times may not be long for this world.

Asked whether she supported using more bonding to fund affordable housing, Mayor Durkan said she supported looking at all options.

The new buildings are likely to come online in 2019.