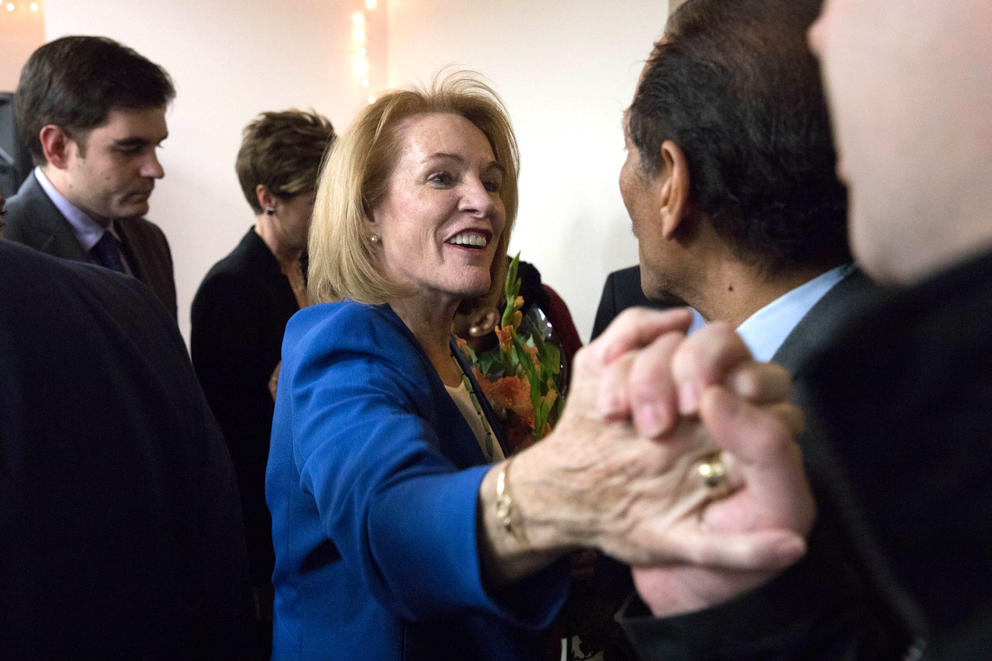 Most prominent but hardly the only woman mayor along I-5: Jenny Durkan is sworn into office at the Ethiopian Community Center in November.

For years, Tacoma Mayor Marilyn Strickland would work alongside Kent Mayor Suzette Cooke, never realizing that, outside of their nonpartisan roles in office, they had different political affiliations.

“I never knew she was a Republican because it never came up in conversation,” said Strickland, who supported Barack Obama’s nomination when she was a delegate to the 2008 Democratic National Convention. “I think women, depending on who you are of course, we are more likely to put aside the partisanship and try to work together to solve the problem.”

As a wave of newly elected female mayors along the I-5 corridor in Western Washington takes office, Strickland looks to these leaders to “bring a regional cooperation that we so desperately need” in tackling the pressing issues many cities are facing.

Starting with Mayor Jenny Durkan, who was sworn late last month in Seattle, women will be taking the reins of major cities across the region. While Durkan is Seattle’s first woman mayor since the 1920s, Cassie Franklin is set to become Everett’s first woman mayor ever, after edging another female candidate. At the southern edge of the state, Vancouver also will get its first woman mayor, Anne McEnerny-Ogle. In King County, five cities besides Seattle — Issaquah, Duvall, Kent, Auburn and Black Diamond — will also be led by women. To the north, there’s Lynnwood, for example, and Bellingham. And just to the south, Tacoma voters picked Victoria Woodward to succeed Strickland, who couldn’t seek re-election because of term limits.

While some women resist the idea that they are naturally more collaborative, Nancy Backus, the first woman mayor in Auburn, says she has observed throughout her career how men and women attack issues differently.

“I think women typically try to be more collaborative. We want to make sure people are getting along and that we are doing the right thing for the right reasons,” Backus, who was recently re-elected for her second term, told Crosscut. “To fix the problems in our country is going to require a lot more female leadership.”

Yet, even as 2017 becomes a banner year for women in politics locally, many women still feel the need to work twice as hard to get half as far. 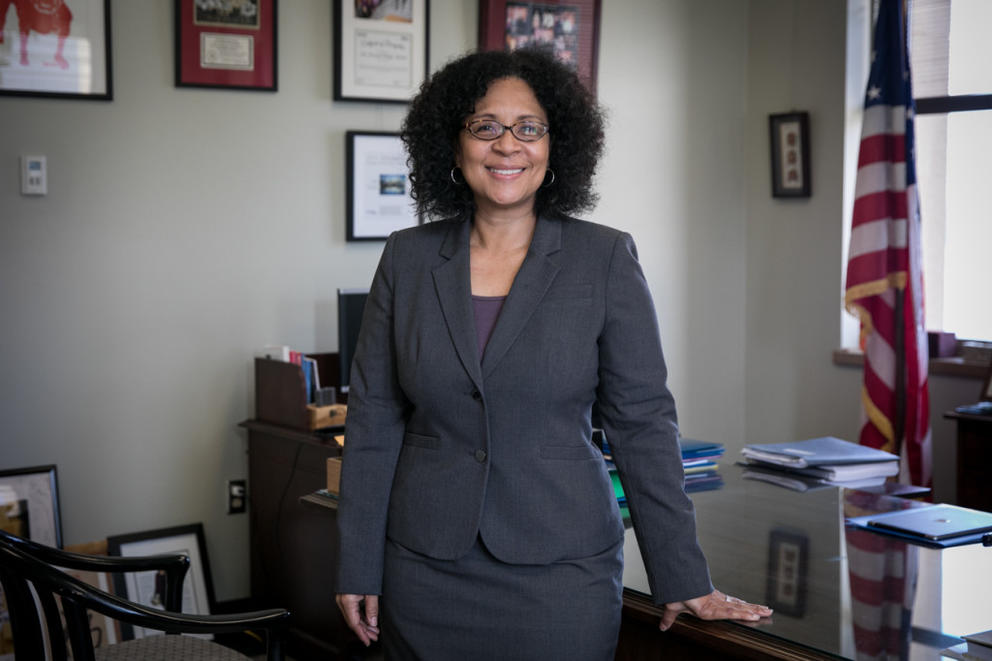 Women hold less than a quarter of elected seats

Though women make up half the population, they remain underrepresented in government — from the congressional level down to local city halls. In 2017, women held roughly 20 percent of congressional seats and just under a quarter of all state legislature seats, according to the Center for American Women and Politics (CAWP) at Rutgers University.

“We need to change that dynamic,” said Strickland. “The more voices you have at the table, and not just female voices, but people who have different experiences, the better outcomes you get.”

In the Washington Legislature, the gender gap is smaller, with women holding 37 percent of seats in 2017. In federal offices representing the state, women have bridged the gender gap, for now. Six of Washington’s 12 congressional seats, including both U.S. Senate positions, are occupied by women.

“One of the things that I think a lot of women don’t understand is, the decision to run for office is often the biggest barrier,” Strickland said. “We are actually pretty successful when we run.”

Like many other women, Strickland never considered running for office until she was asked, which makes her story illustrative.

“Running for office is a very daunting, difficult prospect,” Strickland said. “There's a tendency for women to have to be talked into [running for office] and I think men tend to jump in and say, ‘I’ll figure it out as I go along.’”

She grew up in Tacoma and returned to the city in the late 1980s. Her middle-school guidance counselor challenged Strickland, who is of African-American and Korean-American descent, to become more civically engaged after she commented that city council meetings bored her “because no one on the dais looked like me.”

When she returned in the 1980s, Strickland, who has a University of Washington undergrad degree and an MBA from Clark-Atlanta University, joined boards and started volunteering, but the thought of running for office was still far from her mind. She was finally convinced after others around her, including the former guidance counselor, began encouraging her to run for office.

“We [women] are socialized to be insecure and to doubt ourselves before we get to the point where we think we are competent,” Strickland said.

Backus, mayor of Auburn, said women typically wait until they believe they’ve got all of the experience necessary to do the job before they even attempt to jump into a race.

“I think men say, 'I can do the job and then learn once they are in it,'” Backus said. “And women feel like they need to know the job inside and out before they are willing to put themselves out there for it.”

Barriers once in office still remain

Kelli Linville, mayor of Bellingham since 2012 and a former state representative, first came into politics during an earlier wave of elector successes for women. But she recalled an “uphill climb” when she joined the state Legislature in the early 1990s.

“Men were assumed to be capable and competent; women had to prove they were,” Linville said. “Men were supported and mentored, given committee assignments right off the bat, [while] the women had to earn them.”

The year Linville won her seat, 1992, was dubbed the Year of the Woman as a record number of female candidates swept into office nationally. One of the most prominent was the so-called “mom in tennis shoes,” Patty Murray, who defeated an incumbent Republican from the state to win the U.S. Senate seat she continues to hold today.

“The way that we conducted ourselves was a little bit different, in that it really wasn't about us, it was about getting things done,” Linville said. “I believe that women are often put into the position of being the solution catalyst.”

After the 1992 election, Washington led the nation in the percentage of women in a state legislature, which surged from 33 to almost 40 percent that year. Washington held the top spot until 2005, according to data from the Center for American Women and Politics, and has since slipped to fifth. (Arizona, with women making up 40 percent of its legislature, currently leads.)

The Center doesn't track municipal officeholders, but Washington may be the national leader at that level.

Allen, the Seattle-based political consultant, said in an email that after considerable checking to examine major cities in other states, she couldn't find any other state near Washington's number of female mayors.

"We have more women mayors in our state's larger cities than any other state. When we went to bed Election Night, we had 11 women mayors," she said. By the next day, there were 38. And Allen said that includes female mayors "from border to border."

A quarter century after the Year of the Woman, Amy Ockerlander, who will become Duvall’s fourth woman mayor in 100 years, says that there’s still more ground for women to gain.

Ockerlander remembers attending a council meeting shortly after giving birth to twins, and a male colleague asked why she wasn’t home taking care of them.

“My answer was my children have a father who is fully capable of taking care of them while I work,” Ockerlander said.

“Regardless of how progressive you may think a jurisdiction can be, there is that underlying issue there,” the mayor-elect said. “The reality is we do oftentimes, even in a progressive state, have to work harder to be recognized, often even in our communities.”