Is I-940 a path to reducing police shootings? 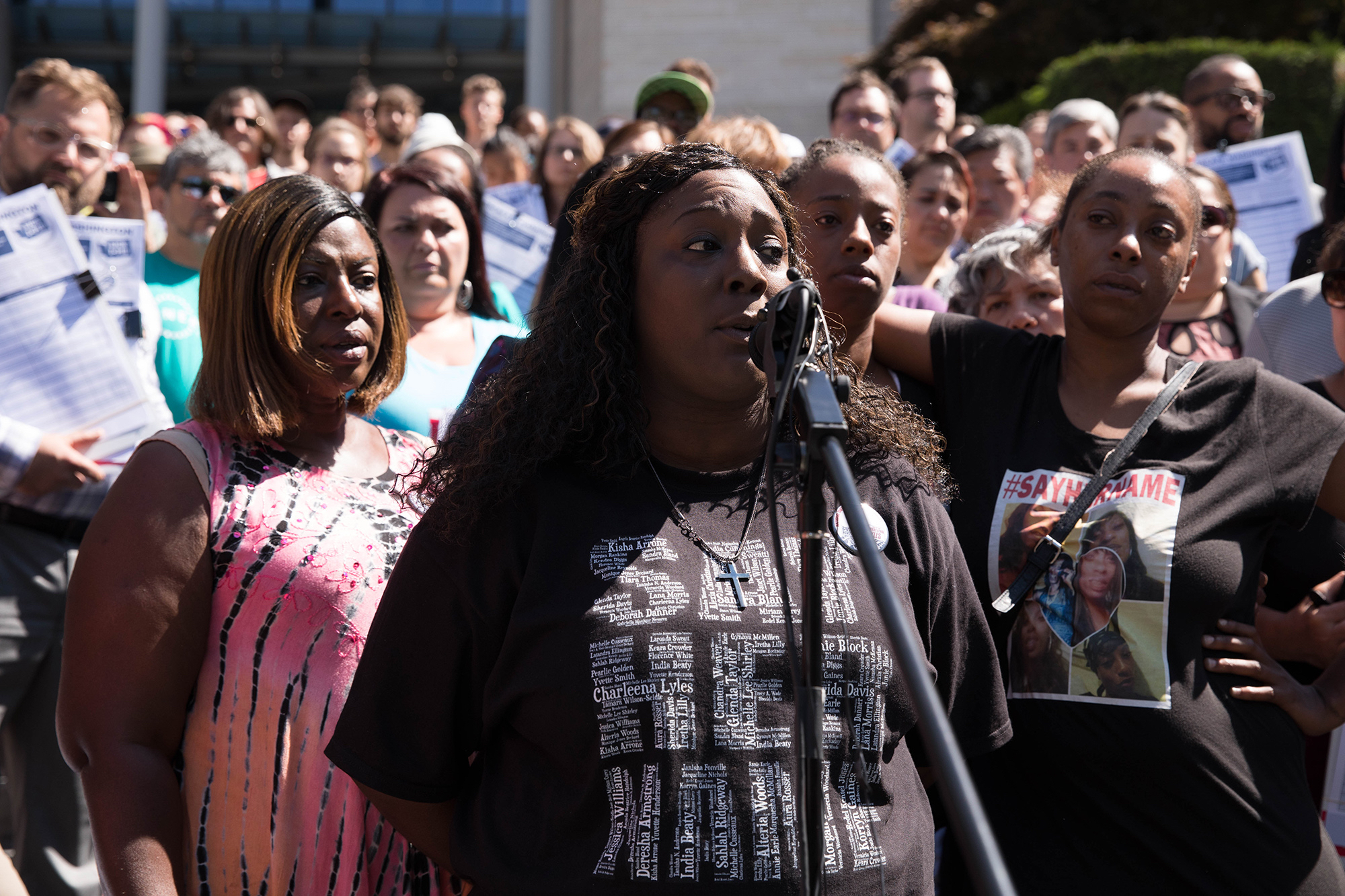 Katrina Johnson, a cousin of Charleena Lyles, speaks at the kickoff for Initiative 940.

The police action was tragic, fatal, possibly unnecessary. But was it malicious? Probably not.

Take your pick: In Ferguson, Missouri, people rioted in the streets after a grand jury refused to indict the white police officer who had shot and killed a black teenager, Michael Brown. In Baltimore, riots followed the acquittal of police officers charged in the death of Freddie Gray, who had suffered fatal injuries while imprisoned in the back of a police van.

Closer to home, many people have seen the dash-cam footage of the Native American carver John T. Williams crossing a street, all by himself, with his carving knife. An officer gets out of his car and orders Williams to stop. Williams, who is deaf, does not. The officer promptly shoots and kills him. The officer — the subject of a scathing report by police brass, who appeared ready to fire him before he resigned — faced no charges.

Or take the murkier but more recent fatal shooting of Charleena Lyles, a pregnant, mentally ill mother of three who was filled by two Seattle officers who went to her apartment after she reported a burglary. The officers said she attacked them at close range with two knives. They weren't wearing cameras. A Seattle Police Department review has reportedly found that the officers did nothing wrong. No criminal charges have been filed.

And no wonder. Under Washington law, says state Rep. Roger Goodman, D-Kirkland, chair of the House Public Safety Committee, “a prosecutor could not bring charges” in the case.

State law — unique in the nation — immunizes police against prosecution unless they have acted with "malice." That makes a conviction virtually impossible to get. In turn, that makes charging an officer an exercise in futility.

That could change through an initiative, whose backers said last week they are entering the final stage of a signature-gathering drive.

In this year's legislative session, Goodman sponsored a bill that would have enacted the recommendation of a Joint Legislative Task Force on the Use of Deadly Force in Community Policing — which he co-chaired ‑ to scrap the "malice" standard. Legislators and interest-group representatives talked about the bill for months, but ultimately, nothing happened.

Will things change now that Democrats control the state Senate, as well as the House and Governor’s Mansion? Goodman, who co-chaired the task force, doubts it. “I don’t think that [political switch] makes much of a difference on this issue,” he says.

But Initiative 940 just may. Even before Lyles' death, De-Escalate Washington filed an initiative to the Legislature that would enact the reforms that the lawmakers didn't pass. It would scrap the malice standard and require all officers receive 40 hours of training in de-escalating violent situations and dealing with the mentally ill.

The initiative is close to being assured of the 259,622 valid signatures it requires. At a press event last week, backers said they are actually over 280,000 but want to get to 350,000 to assure that the measure meets state requirements. If it does get enough valid signatures by a Dec. 29 deadline, the Legislature has just three choices. It can enact the measure; reject or ignore it — in which case it goes on the ballot; or come up with an alternative — in which case both the De-Escalate Washington and the Legislature’s versions go onto the fall general election ballot. Legislators could no longer simply kick the can down the road.

Goodman says he fears that if I-940 gets enough signatures, its backers will be in advocacy mode, not in any mood to negotiate solutions to technical problems or achieve consensus. But Riall Johnson, the former NFL linebacker who serves as campaign manager for De-Escalate Washington, says that when I-940 gets enough signatures to go before the Legislature, the next step will be negotiation.

How about Goodman’s observation that negotiation stalled last session because the police groups never presented a unified position? “That was without an initiative [putting pressure on them],” Johnson says. “Now something has to be either voted on or punted to the ballot — I don't care either way as long as this bill passes. It will be up to them on how soon it does. We have asked police unions to provide solutions as well and they never come up with anything workable.” (I left messages with a couple of police organization in the course of researching this article. No one got back to me.)

No one says that training is a bad idea. During the recent election for King County Sheriff, the winning candidate, Mitzi Johanknecht, said in her voters’ pamphlet statement that if she were elected, “deputies will receive ongoing de-escalation and anti-bias training, and increased access to less-lethal policing tools. This is why I was the first law enforcement official to endorse I-940.” But would expanded training have saved Charleena Lyles? Probably not.

One of the officers who shot Lyles had gone through 40 hours of crisis training, which most SPD officers have received; the other, hired in just 2015, had a basic eight-hour course. But neither were carrying the “less lethal” Tasers, although one had training in Taser usage and was supposed to have one with him. And they might not have used them, anyway. I suggested to I-940's Johnson that if you believe the officers' account of what happened in Lyles' apartment, the measures proposed in I-940 might not have mattered. He made it clear that he couldn't make the leap of faith needed to believe it. Besides, “the officer neglected his training when he left the station by not using the tool [the Taser] he was trained with and required to use,” Johnson says.

Unjustified police shootings have been cast as a racial issue but it’s not as simple as the prevailing narrative. Although the percentage of black victims is disproportionately high, most people shot by police aren’t black. As lawmaker Goodman points out, the greatest correlation with police shootings is not skin color but mental illness. The same is true of homelessness: The largest single group of Washington homeless is the mentally ill.

The state has already lost lawsuits over its treatment of people who are or are suspected to be mentally ill. A federal judge has held the Department of Social and Health Services in contempt for its failure to conduct timely mental health evaluations of prisoners. People with mental health problems crowd the jails. “We ask our law enforcement to solve the mental health problem,” Goodman says. The sometimes-fatal confrontations on the street are “a result of our failing to respond to the front end of the problem.”

Johnson minimizes the role of mental illness itself, pointing to training as a way to improve police handling of troubled individuals. “There are mental health professionals that deal with these people ... every day and don't manage to shoot them,” Johnson says, “We want more of these [professionals'] tactics to be implemented into the [police] training process so they can defuse any tense situation and not escalate. ... It can be done.

More mental health care would, of course, require more money. And that does not seem to be forthcoming any time soon. “This is ultimately a resource issue,” Goodman says.

Winston Churchill famously said: "We sleep safely at night because rough men stand ready to visit violence on those who would harm us.” At times, the police are those "rough men." But Churchill was talking about the military, not about the then-unarmed British bobbies. The recent militarization of some American police equipment and attitudes has already been much discussed. But cops aren't the military — or at least, they're not supposed to be. And community members , mentally ill or not, aren't the enemy — or at least, they're not supposed to be, either.

In Baltimore, the officers involved in Freddie Gray's death were charged but not convicted. Allegedly, that experience has made some Baltimore cops unwilling to do their jobs, contributing to that city’s horrendous murder rate. Some people fear that if cops here are looking over their shoulders at potential prosecution, they’ll be less likely to do their jobs. Whether or not getting rid of the “malice” standard would create this kind of atmosphere is another question.

“We are the only state in the country with this [malice standard],” Johnson says. “I don't hear police in other states asking for this kind of immunity. ... A cop doing his job won't have to worry about being prosecuted. There are situations where shootings are justified, but there are also situations where if police didn't show up, no one would've been killed in the first place.”

He adds, “John T. Williams didn't pose a risk to anyone, yet a cop showed up and he ended up dead.”

Increasing prosecutions isn’t the initiative campaign’s goal, Johnson says. “Our campaign would much rather see less shootings than more prosecutions.”