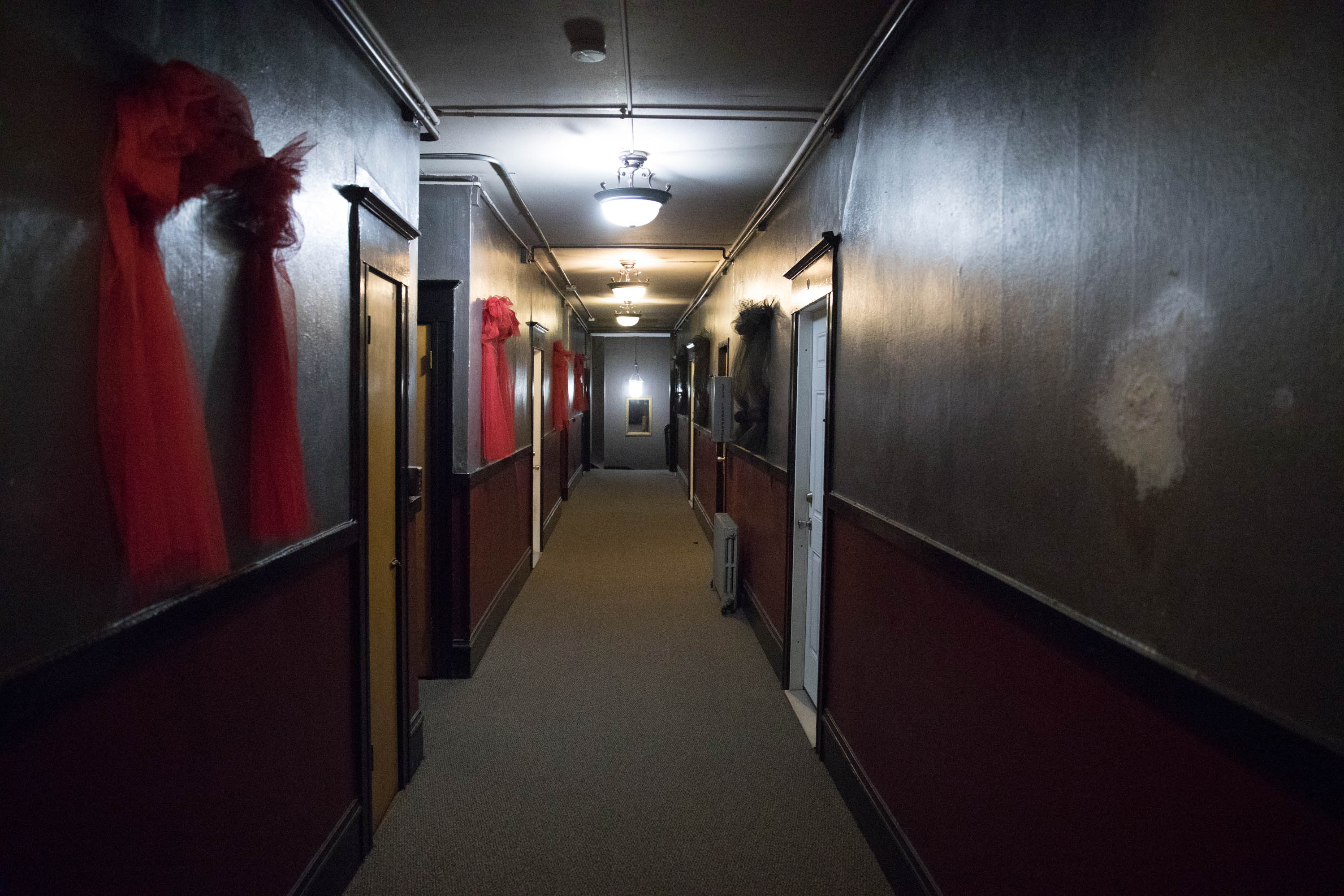 Hallways of the Moore Apartments on Capitol Hill. (All photos by Matt M. McKnight/Crosscut)

Before Teresa Banks explains why her rent is increasing by 50 percent, she must first recount the changes she's seen in her 15 years at the Moore Apartments on north Capitol Hill.

Tenants no longer warm their apartments by opening their oven doors. The hallways, once a "vomitous beige," are now painted red and black, like a Halloween party that's just wrapped.

But the biggest change happened just last spring, when her longtime landlord sold the building. The notice of rent increases soon followed.

Now, sitting on her couch, she and her friend and neighbor Michal Blum (pronounced Mi-Kal) recount the building's oddities with some affinity, quirks that have, until now, helped keep their rents low.

Rent went up here Dec. 1, bringing the price closer to other rentals on north Capitol Hill. And now some of the residents, a sort-of tattooed-Seinfeld group of neighbors who come and go from each others’ apartments, are likely to move out.

They join the ranks of thousands of others who have seen their rents go up in what is now the fifth most expensive city for renters in the country.

Using a string of tenant protection laws, the Moore's tenants staved off the rent hikes. But that string has run out.

Soon Seattle Councilmember Kshama Sawant will propose legislation that would give tenants like those at the Moore Apartments one more rock to stand on — a stopgap for so-called “economic evictions,” when tenants move out because rents have been raised.

Under Sawant’s legislation, if a landlord raises rents by 10 percent or more within a 12-month period and a renter moves out, that tenant would be entitled to a check for three months rent. The policy would only apply to people with annual incomes of $50,000 or less.

The proposed legislation will likely go through months of debate, if it’s passed at all. The Moore tenants are sure to move out before then. But the story of The Moore has served as a model for Sawant's bill: the council member's office has visited with the tenants here to discuss how the law would work.

The Moore, though, also serves as an example for opponents to Sawant’s legislation, who believe fewer "mom and pop" landlords will want to stay in the rental business. The barriers to raising rents will spur more sales, argue landlord and real-estate groups.

The Moore Apartments are housed above Rudy's Barbershop, in a building constructed in 1904. Banks' apartment is painted "mustard and pumpkin" and is stuffed with posters, beads and flowing theater curtains. The 47-year-old, who is self-employed, has an atrium and a room dedicated just to her birds. Banks is a ticker tape of stories about the changing Capitol Hill neighborhood and about the churn in the building over her years here.

Her telling of the recent rent hikes is framed in good versus evil, with new owner Hunters Capital, a Seattle development and management company, playing the part of the bad guy.

Banks' friend and neighbor, Michal Blum, is a more recent tenant of the Moore, having moved back to Seattle from New York three years ago. Where Banks has decorated every inch of her apartment, Blum's aesthetic is more sparse. Her apartment faces Uncle Ike's pot shop across the street, which projects classical music occasionally. A program manager at the UW's Public Health Capacity Building Center, Blum is less interested in naming a villain in her rent hike story. But she's equally furious that housing in Seattle has become so expensive.

Their apartment building's previous owner, Roberta Moore, is an elderly woman with deep roots in the neighborhood. Her grandfather owned properties all along 15th Avenue, and she apparently “really liked the ‘kids’ who live here,” Banks says. As a result, the Moore's rents remained below-market-rate for years.

Even as the neighborhood grew more popular and more expensive, the cost to live at the Moore Apartments remained the same. Until this month, Blum’s rent remained $950 and Banks’ larger apartment was even cheaper, $900 a month.

With those low rents, however, came tradeoffs. Blum once turned her radiator on before leaving on an errand, only to get a call that the downstairs business was getting drips from upstairs, she recalled.

The building's stairs out back feel shaky. And each apartment has walls butting into each other, the relic of old offices that were here before they were turned into apartments.

Both tenants acknowledge the Moore's character is part of what has kept the prices low. “I knew what I was getting into,” says Blum.

Then in May, Roberta Moore sold the two-story building for $11.25 million. All six building residents subsequently received a letter indicating a rent hike (up to 40 percent in some cases) as well as notice that month-to-month leases would be canceled.

Banks contacted the City who told her the new landlord could not force someone off of a month-to-month lease, which forced the new landlord, Hunters, to rescind the letter and delay the rents. But the second notice called for higher rents. After the tenants complained about retaliation, Hunters again rescinded its letter, reverting back to the original increased rent, plus a fee for month-to-month.

Representatives from Hunters did not return a call for comment.

Now, the Moore's rents are in line with the surrounding neighborhood, where units the same size or smaller routinely rent for between $1,600 and $2,000.

But that means nothing to Blum. “As much as they want to say it’s still market value or it’s under market value, that’s all bullshit,” says Blum. “Because our incomes are not raising to market value and these are our homes we’re talking about.”

The thrust of Sawant’s proposed legislation is to ding large property management companies for raising rents too quickly. “I can tell you it’s not mom and pop landlords who are raising their rents 20 to 30 percent,” Sawant told Crosscut in October.

“She’s totally right,” says Martin with RHAWA, but says the effect of her legislation will just spur more similar sales. “This is just going to be a policy that discourages small landlords from owning stuff in the city and that’s not gonna help tenants.”

He adds, “As far as the costs of rent and when people see these things happen, we’re very understanding of the human side of things. But mandating this kind of stuff is just not gonna solve the problem."

Sawant's proposal is near identical to legislation passed last February in Portland.

In an interview with Crosscut in October, attorney John DiLorenzo, an opponent of Portland's legislation, referred to landlords like Moore as the “lazy landlords” who prefer stability to maximum profit. “When the ordinance passed here in Portland, many of those landlords woke up and started to panic,” he said.

Jamey Duhamel, director of policy for Portland Commissioner Chloe Eudaly, who spearheaded Portland’s legislation, says after the legislation passed, “We have only heard anecdotally through our community partners and through general media that mass evictions have stopped or slowed and calls coming in to legal aid for no-cause evictions have stopped almost completely.”

But she added, “However, we have also heard that rent increases of 9.9 percent have become more common.”

The community in the Moore apartments — which is like a dorm for adults — was built over many years as friends were tipped to vacancies. "Having to leave all of my connections, all of my support system, that’s frustrating and intimidating," says Banks of the prospect of being priced out.

She's figuring out whether the rent hike will indeed force her to move. But one thing she's certain about is that Sawant's legislation has merit. "Anything that returns the power balance between tenants and the owners."