The last horse-drawn carriage in Seattle

It’s the busiest time of year for this “mane” attraction. 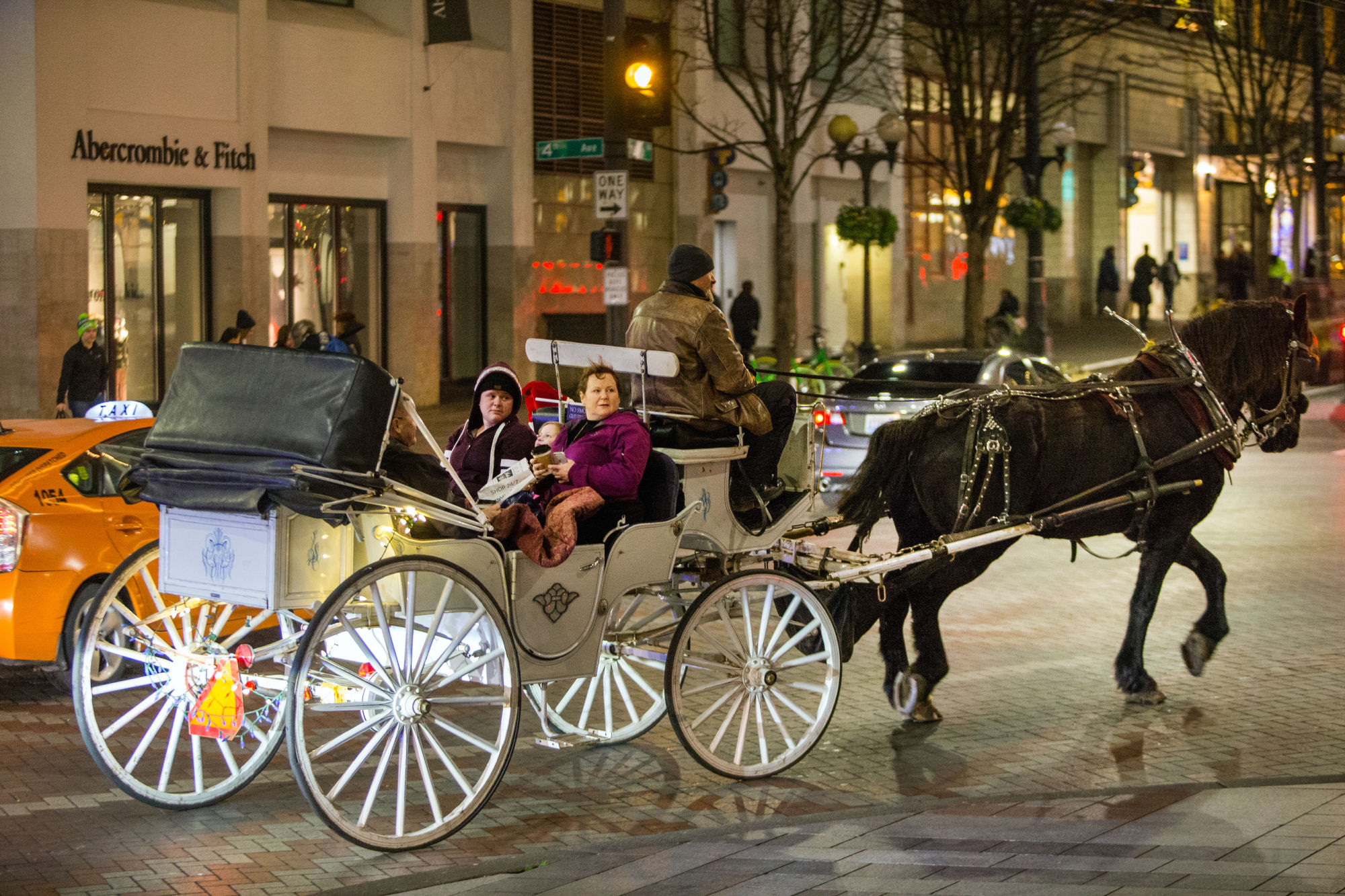 Forty-five dollars gets you a 15-minute ride straight out of the Victorian era — or old-time Seattle. People in the holiday spirit clamor to get onboard.

“A totally different way of seeing the city, especially at night,” says Meredith Settle of Shelton. She and fiance Matt Lininger were taking a ride in celebration of their wedding engagement.

In its heyday, the horse-drawn carriage business meant one dozen horses lining up along two blocks on Pine Street during the holidays. But for the past several years there’s been only one such business — Sealth Horse Carriage — that is owned and operated by Steve Beckmann. Beckmann, who started the service in Seattle, has been a fixture here for more than 40 years.

When he first started, the city was a very different place. “It was more of a town than it was a city,” Beckmann says. “It was very slow-paced. Nobody had any money. It wasn’t that long after the Boeing crash. You could buy a house for 20 grand.”

Horses and carriages once used to find plenty of space to park in front of the old Frederick & Nelson department store on Fifth Avenue and Pine Street, where Nordstrom now stands.

Now, Beckmann and his horse contend with taxis, traffic and “techies.” From his perch high in the open carriage, he’ll shout instead of beeping a horn at cars who get in his way.

Training the horses for holiday rides includes first hitching the animals to a wagon and driving them through a field in Issaquah. Over several months the horses are gradually acclimated to rural roads and eventually to the hustle and bustle of downtown city streets.

“I’m very safety-oriented,” explains Beckmann, adding that he’s been in only one serious accident, more than 30 years ago.

The work is not always easy for the horses. Four years ago, a horse driven by one of his hired drivers slipped and fell. Beckmann explained the animal was tangled up in a harness. “I got him untangled and he jumped right up. He wasn’t injured or anything. That’s happened maybe just three times in all the years I’ve been in business,” he said.

“I do feel sorry for the horse,” Reacie Harris said the other evening as she watched Amos, Beckmann’s 11-year-old Percheron draft horse slide on the pavement, sparks from his metal and rubber shoes flying. “It’s hard on their hooves.”

One of the most distinguishing features of Amos is a bright yellow sign stuck on his forehead above his dark brown eyes hidden by blinders. “Do not touch,” it reads. Yet many do. “So many people want to come up and touch the horse and the horse gets tired of that pretty quickly,” says Beckmann. “I read somewhere that 15 to 20 percent of Americans are illiterate. There are people who just come up and touch him anyway."

On another recent evening a young couple crossed the street and shouted: “Animal abuse!” and “Horses don’t belong in cities!”

“Animal rights people think you’re the devil,” Beckmann remarked. “I always tell people horses have been working in the city for 3,000 years. Everything was drawn by horses. People have forgotten all about that. Somehow they think a horse shouldn’t work.”

In New York City, Mayor Bill de Blasio has fought to restrict the horse and carriage industry. De Blasio introduced a bill last year that would have limited the industry, including a regulation to operate only in Central Park. But he lost when the city council chose not to hold a hearing on the proposal.

In Seattle, the horse-drawn carriage business is regulated by the City. Seattle animal control inspects Amos once a year and Beckmann’s veterinarian sees him twice a year. Though it’s legal to work his horse for ten hours a day, Beckmann says he’s usually out with Amos no more than eight hours at a time.

Over the decades, Beckmann estimates he’s trained and sold more than 75 draft horses. He once operated a handful of horse and carriages during the holiday season. Now he owns four horses that he boards at his Issaquah farm and one carriage.

“I want to create some joy in the world,” he says about the business. He also earns a living growing strawberries and vegetables that he sells from his roadside stand, Cougar Mountain Farm.

The two weeks before Christmas are his busiest time. In years past, he’d finish the holidays with a “good chunk of money,” enough to travel to wherever he desired.

But with his Issaquah property having grown in value, Beckmann says he may pack up and move away from Western Washington one day soon. “Seattle’s getting to be too big of a city for me,” he says.

“I’m the last of the Mohicans. There used to be about 15 carriages running. Everybody basically just got old and retired.”

And he drove Amos down Pine Street, the clippity-clop the unmistakable sound of a horse in a city — and a sound of the season. 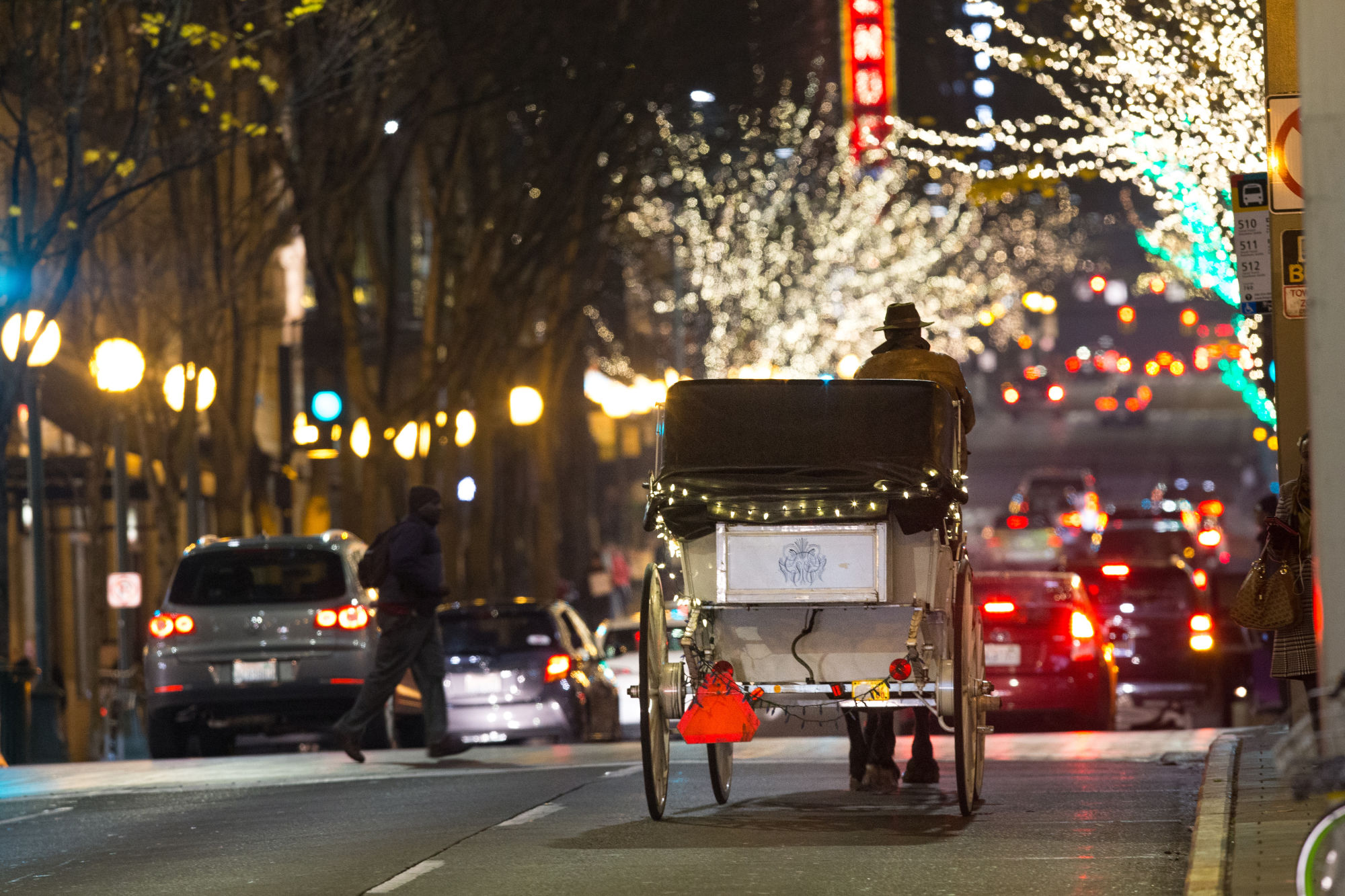 Steve Beckmann of Sealth Horse Carriage drives his horse and carriage down Fifth Avenue in Seattle. © Karen Ducey for Crosscut

Steve Beckmann of Sealth Horse Carriage drives his horse and carriage down Fifth Avenue in Seattle. © Karen Ducey for Crosscut