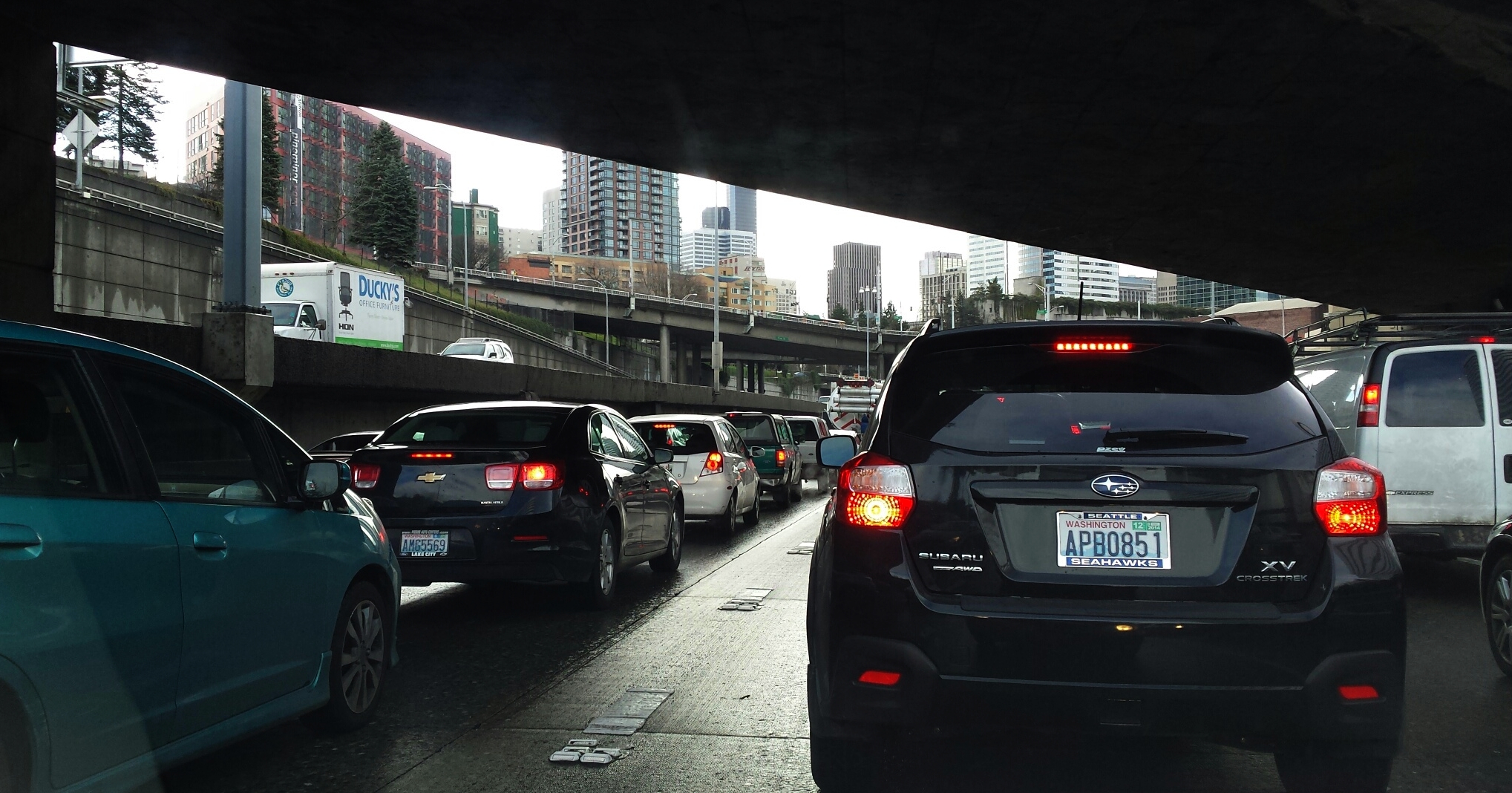 Heavily backed up traffic on southbound I-5 in Seattle.

As we say goodbye to 2017, we may be tempted to declare: “Don’t let the door hit you on the way out!” It was the year that many of us probably would like to forget. And what better way to forget but to look forward to the year that could be?

But first, that dang 2017: In Seattle, we had scandal and tumult and four mayors in the space of a couple of months. Our City Council chambers resembled a Maury Povich show gone awry. And getting around town felt like one of those dreams where you run and run and can’t seem to move.

2017 also brought us the first year of a President who makes us wonder if we can survive three more years of this. Talk about bad dreams.

In Olympia, the Democrats captured all branches of Washington state government (largely due to the aforementioned bad dream), climate change stoked protests at ports, rail, and pipelines, and more mass shootings led to, well, nothing.

And of course, we can’t forget about Men Behaving Badly almost everywhere.

The carbon war expands and spreads. There will be more battles between Seattleites and Alaskans over fossil fuel extraction and transport. Trump will continue to make matters worse by re-opening issues that were settled. Examples include the Pebble Mine in Bristol Bay which is home to the greatest fishery on Earth, and opening up the Alaska National Wildlife Refuge to oil exploration. The Governor will continue to make Climate Change his top priority. The real question will be what the new Democratic majority in the legislature will do. The pressing problems of education funding, mental health and drug treatment, and transportation will not go away.

Congressional races in Washington state are sure to raise big money and big passion. With 8th District U.S. Rep. Dave Reichert retiring, lots of candidates are jumping in. And while the Democrats will certainly have momentum, they don’t yet have a big name challenger. Will anti-Trump anger be enough to take on a well-known Dino Rossi? The Democrats who have announced their campaigns include pediatrician Kim Schrier, former King County deputy prosecutor Jason Rittereiser and business owner Mona Das.

In the 5th Congressional District in the Spokane area, Democrat Lisa Brown is challenging incumbent Republican Rep. Cathy McMorris Rodgers. Rodgers has been traditionally very moderate but is in leadership and pushed hard for the recently passed tax plan that is getting poor marks from a majority of the public. Brown is well known in the Spokane area and will make a big run there. Could Brown be the first Democrat to win that seat since former Speaker of the House Tom Foley? McMorris Rodgers is smart and articulate. It will be one of the top races in the country to watch.

What will the new mayor, Jenny Durkan, find when she lifts the hood at City Hall? My hunch is she is going to find ample places for spending reform. Look for more scrutiny over how the nearly billion-dollar transportation levy is being spent. How much is going to Seattle Department of Transportation (SDOT) headquarters? Are projects getting done in a timely manner and within budget? There will be new levy requests on other issues and renewals (there always are). The Durkan team will want to have credible leaders in place and be able to make the case that money is being spent wisely. Will this result in new faces at City Hall? I think it will. We are already seeing changes in top departmental leadership positions in SDOT and City Light among others. There will likely be more to follow.

The campaign to assemble the new Boeing 797 in Washington heats up. This is a big deal. Look for a full court push to win this work. Boeing is expected to commit to building the all-new aircraft plane next year, followed by a decision where to assemble it. We need all hands on deck to show Washington is the best site for assembly. We have a lot going for us — including the highest concentration of aerospace workers on the planet. Boeing Renton turns out an amazing 47 copies of the 737 a month now, and they are looking to increase production further. This isn’t your Grandpa’s airplane factory — or even the Boeing of 10 years ago.

The Big Crawl begins. Downtown mobility will be severely hampered by the following: removal of the Alaskan Way Viaduct; Alaskan Way road/waterfront park construction; the First Avenue Streetcar folly; convention center construction; and dedicated bike lanes expansion. Also, Third Avenue will be closed to cars and buses banned from the tunnel. And then there will be tolling on the new Highway 99 and new commercial construction in both downtown and South Lake Union. This will not be a one-year problem.

2018 could very well be the Year of Neighborhoods in Seattle. Look for big changes in the city’s Department of Neighborhoods. There will be an attempt to get back to more bottom-up policy development and efforts to be less confrontational than the Murray administration. The challenge will be in bringing all voices to the table and helping other departments (talking to you, SDOT) engage people before deciding to push an agenda that impacts people and businesses. Also, Councilmembers beware: Your constituents will be losing patience with the failure of the city to respond to the homelessness, drug and property crime crisis.

2018 will be the Year of the Woman. It will be different than 1992, though. This is going to be yuuuuge. Men behaving badly in 2017 have sown the seeds for women to march to victory in 2018. The Women’s March was a real thing that will transform our politics for years to come — for the better.

Goodbye, President Trump. The combination of catastrophic midterm elections for the GOP, foreign affairs bungles, a mental breakdown and the Mueller investigation means Mike Pence will achieve the status of Gerald Ford.