How urban sprawl shapes the critters that crawl our city 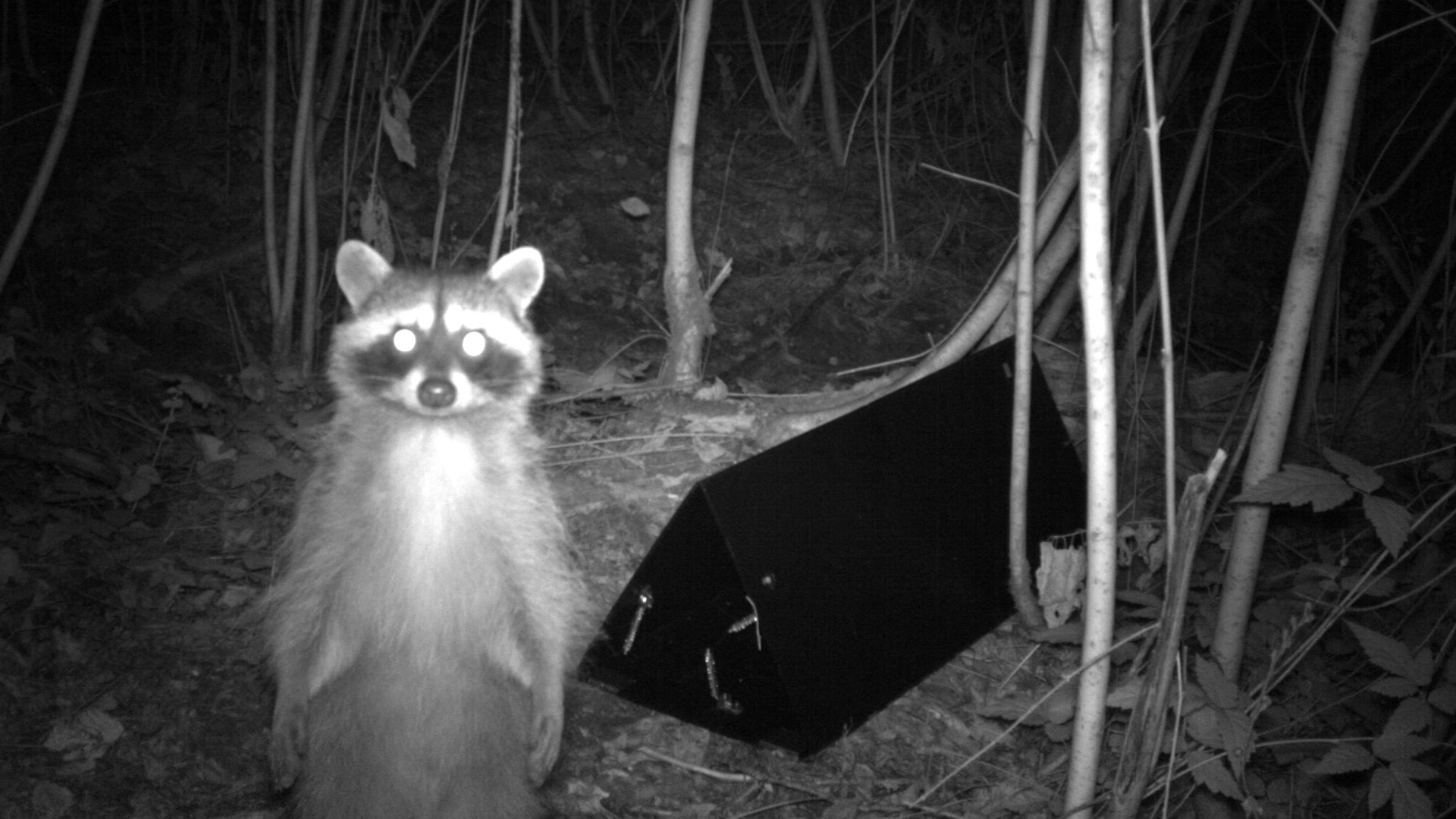 A raccoon stops in front of a game camera along the Puget Creek Greenspace. Courtesy Mark Jordan/Seattle University

A band of raccoons scamper over a downed tree. A coyote sneaks a drink from a mossy pool. The black and white photos that flash across Professor Mark Jordan’s computer screen look like they could have been shot out on the Olympic Peninsula or maybe at a remote spot in the Cascades — until a curious house cat sneaks out of the underbrush.

These images, along with the 50,000 other stills that Jordan collected last summer, all came from game cameras stationed in public parks around Seattle. Since 2013, Jordan and his Seattle University biology students have been on the lookout for urban predators — coyotes, opossums and raccoons.

“The big-picture question I’m interested in is how does urbanization affect wild mammals, in particular predatory mammals that are higher up on the food chain?” says Jordan.

It’s a drizzly fall day when Jordan and Diana Jacobsmeyer, a senior at Seattle University, drive south to collect the last camera traps of the field season. Jordan’s Subaru idles in stop-and-go traffic as we roll past looming construction cranes and busy pho restaurants.

Prior to moving to Seattle, Jordan’s Ph.D. research involved tracking down fishers — two-foot-long weasels — in California’s remote Southern Sierra Nevada range. He spent time living in a Forest Service cabin, searching for game trails where unsuspecting wildlife might amble through.

Although urban Puget Sound feels like a completely different world from backcountry California, Jordan is quick to point out the similarities in the work.

“The general rules of ecology still apply in an urban area, as they would in a wilderness area,” he says. The research still comes down to understanding a complex web of interactions between predator and prey, humans and wildlife, species and environment.

Today, we’re traipsing through a small green space sandwiched between a suburban neighborhood and an industrial park. The Duwamish River flows lazily by. Discarded beer cans and a small shack line the bank. Just around the next bend is the Seattle Sounders’ practice field and a little farther on is the polluted Lower Duwamish Superfund site.

Every spring, Jordan’s research team looks for spots across South Seattle just like this one — islands of tree cover surrounded by bustling development. Sometimes the researchers will deploy a baited box lined with bristles used for gathering hair samples.

There’s no bait box at the Duwamish site today, but we do stop to collect the motion-activated field camera the team dropped off three weeks ago. The metal box is bike-locked to the base of a tree, mounted at shoe level and pointed in the direction of a small game trail. If set up properly, the camera will have documented who, or what, has been scurrying around Seattle’s parks.

Back in Jordan’s office, he pops a camera memory card into his computer and begins scrolling. People and pets — the boots of a passing hiker, a dog straining at its leash — are mixed with shots of wandering wildlife — a pair of soaking-wet raccoons, a raccoon missing its tail, another raccoon scurrying from tree to tree.

“We’ve gotten at least one photograph of a raccoon in every single park that we’ve sampled,” Jordan says.

In fact, the data collected from Jordan’s field sites over the past three years seems to point in a consistent direction: “As you increase urbanization, you actually get an increase in detections of raccoons.”

That may seem surprising to us, but Jordan says it makes perfect sense:

“We create conditions for raccoons that tend to make them quite happy.”

As human presence increases, along with roads, buildings, and domestic pets, Jordan speculates that competition drops off from larger predators like mountain lions. Raccoons move in to take advantage of our garbage as an easy food source.

To better understand how these critters use the urban environment, we leave Jordan’s office and head up the hill to a biology lab just off campus. Up a few flights of stairs, tucked behind rows packed with lab equipment, Jordan pulls the handle of a massive industrial freezer. The door swings open and a cloud of frost reveals a stack of small cardboard boxes.

“My students right now are working on a project where they’re coming up with a genetic way to identify the species that left a hair sample,” Jordan explains.

Each sample is stored in its own small vile, categorized by location, and kept at -86 degrees Celsius. Ultimately, the researchers are hoping to understand how different species interact with the city. Do raccoons, opossums, and coyotes have different movement patterns between these islands of green space?

For Jordan, the project is a reminder that nature doesn’t stop at the edge of the city, and in fact, that some wild creatures thrive in our shadow. “Within a square kilometer of Seattle,” he says, “you might actually find more mammalian carnivores than you would in the same square kilometer out in the forest.”