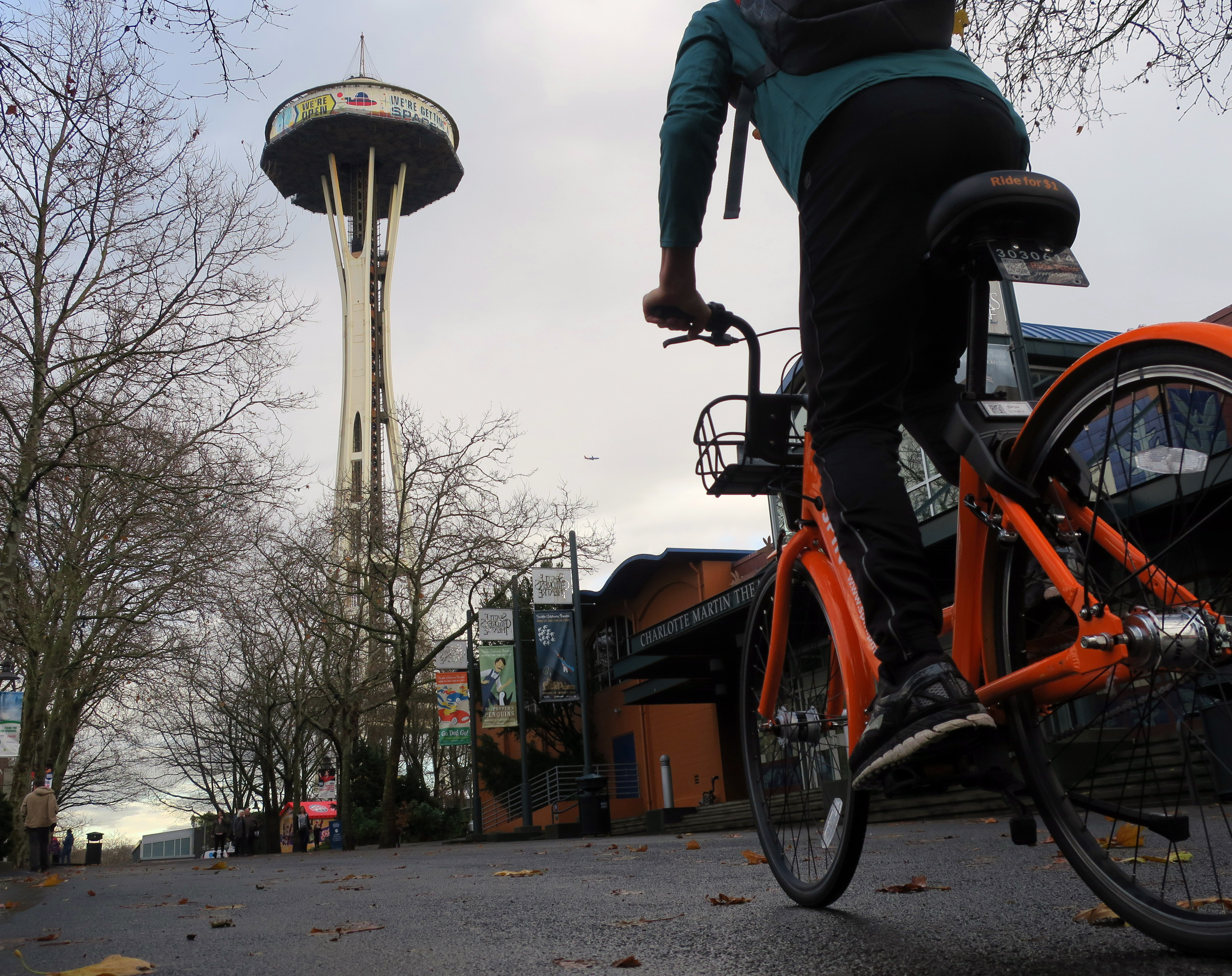 A rider on a Spin bike explores Seattle Center.

Three private companies — Spin, ofo and LimeBike — have dropped 9,000 easily rentable two-wheelers onto our streets, placing us firmly at the forefront of American cities with dockless bike-share operations.

“Seattle has undergone the most rapid transition of any city in the country,” said Derrick Ko, co-founder of Spin.

And this is just the beginning for the Puget Sound metro area. Cities from Olympia to Everett could be next for bike sharing, said Jason Wilde of LimeBike.

“We’re in active talks with many other cities in the region,” he said.

If you’re like me, the sudden appearance of all these colorful rides was surprising and a bit bewildering. As a regular cyclist, I welcomed the bikes, thinking they could only help our car-centric congestion. I even thought I might try one “someday,” but then pedaled merrily along on my own bike.

Maybe it was market saturation: As more bikes kept appearing as the companies ramped up operations, I finally decided to try them out. In the process, I came away with some favorites.

Strictly from a performance standpoint, there’s one clear winner: Spin. From an operations standpoint — how well the app works, how easy it is to find a bike — there’s another clear winner: LimeBike.

If you’ve paid any attention to these bicycles, you know they all function basically the same way. You download their app to a smart phone, plug in your credit card information, scan the QR code on the bike to unlock it and off you go. Each ride costs $1 (although all of the companies offer deals on free rides), and when you're done, you may leave the bike wherever your ride ends.

Over the course of a recent week, I rode the bikes around the city to run errands and get around. I also tested them for climbing ability, speed and overall usability.

Yes, we have lots of hills in Seattle, and that’s a challenge for bike-share riding. Arguably, it’s what killed the old city-run bike share service, Pronto. In practice, the bike-share companies all must “rebalance” their rides by positioning bicycles at the tops of hills because few riders will actually take them there on their own.

“People tend to gravitate downhill,” LimeBike’s Wilde said, “not so much uphill.”

“We know that’s how it works,” agrees Spin’s Ko. “We bring them uphill and people bring them downhill.”

I decided to buck that trend. I rode a LimeBike all the way to the top of Queen Anne for an errand one day, and I was gassed halfway up the hill. “Good job!” a passing cyclist said to me as I grunted my way upward, too winded to reply.

I made it, but it wasn't easy.

For my test, I timed all three bikes on a moderately steep hill on lower Queen Anne, from Aloha north to Lee street on Taylor Avenue, about 0.3 mile. Here are my results:

The Spin bike has three gears, and first gear operates reasonably well on the climb. The model tested is the newer version of Spin’s product line in Seattle, with a lower handlebar and a lighter frame. The design makes it easier to get into an athletic position over the front wheel to drive the bike uphill.

The LimeBike model has eight gears, which theoretically should make it a better hill-climbing machine. First gear, in fact, is quite low, but I found myself in third gear to push the bike with any speed. It is designed to travel slowly and steadily.

The ofo bike is a mofo when it comes to climbing. With three gears and a not-so-low first gear, it’s very difficult to get this beast up the steepest stretches. At one point, I even thought I might have to step off and walk it uphill.

None of these bikes will rocket on flat roads, but once their heavy frames get going, they roll well on their solid, foam-filled tires. I rode all three on the flat Elliott Bay Trail north through Myrtle Edwards Park to the grain-loading facility at the end of Centennial Park, a distance of about 0.9 mile.

In each test, the trail was mostly empty of pedestrians and other riders as I pushed the big bikes as hard as I could. Here are my timed results:

Again, Spin’s geometry, lighter frame and lower handlebar made it easier to get going and push to faster speeds. The Spin model’s adjustable seat post positioned me at the proper height so I could get comfortable for fast riding.

The LimeBike design puts riders back in a beach-cruiser mode, which doesn’t make it easy to push speed. The eight gears are nice, but the middle gears skip and slip on the test model. A short seat post —  the bike’s seat tops out at the proper height for a person who is much shorter me (at 5 foot 10 inches) —  also slows it down.

Like LimeBike, the ofo bike has a beach-cruiser design, and low seats, which limit its speed. The test bike creaked and whined, reminding me of a wooden ship groaning in stormy seas. When you compare a bicycle to a schooner, you know that’s not good.

While I like the overall design of the Spin bike best, Seattle Bike Blog Editor Tom Fucoloro said many people like the feel of the big-framed LimeBike

“The LimeBike feels like the most solid bike,” Fucoloro said. Over time, the beefy frames may stand up best to repeated use, he added.

All of the apps use GPS to show the locations of the bikes nearest you, track your ride and, at the end of a trip, offer you a chance to share it on social media.

I’m no expert on smartphone apps, but I found the LimeBike app easiest to use. The apps for Spin and ofo were often buggy.

In one case, I opened the Spin app and it showed two bikes available on Eighth Avenue just north of Stewart. Neither was there. Across the street on Stewart, a Spin bike (not shown in the app) was parked. When I tried to unlock it, the app crashed, and then my phone died.

That’s a problem with all of the apps — they are battery eaters.

Using the ofo app on my first several trips, I was given the option to share my ride on social media, but the maps showed me riding from Seattle to somewhere off the coast of Nigeria — as in Africa. Eventually the glitch disappeared on subsequent rides.

During everyday use, the bikes had some problems. Nearly every ride had some kind of maintenance issue. Twice I had loose seats on ofo bikes, and in one case, I had a sticky brake that squeaked loudly, then locked the tire.

The same thing happened on a Spin bike when I rode on slick streets. Many Spin bikes have broken tail lights, and one had a frayed cable hanging off the back brake that jabbed me in the leg as I rode.

Vandalism on the bikes seems to be fairly common. Many of the bikes have been tagged, and Spin bike baskets appear to be particularly popular with graffiti artists.

And speaking of baskets: Don’t try to use these carriers on ofo bikes — they are too shallow, which I discovered the hard way. After loading some groceries in my ofo basket during a trip to the store, they promptly flew out and onto the roadway on the trip home.

I found the bike-share rides incredibly handy, inexpensive and useful. I can see using them regularly in the future when I don’t want to take my own bike.

During high-traffic times, there’s no doubt that riding the bikes around the city is much faster than taking the bus or driving a car. During rush hour one day, as legions of grumpy bus riders waited to go home at Third Avenue and Pike, I hopped on an ofo bike and was home 15 minutes later as I rode through the traffic.

I also appreciated the ability to simply park the bike at the end of my trip. It was easier and faster than finding a place to lock my own bike.

As for choosing which bike share to use, Seattle Bike Blog’s Fucoloro says wisely, “The one I like best is the one that’s closest to me.”

“We plan to use that evaluation to recommend action to the city council in the spring of 2018,” he said. The street-use permit for the bike companies continues until July 6, and then the Seattle City Council will decide what happens next for bike shares, Mah said.