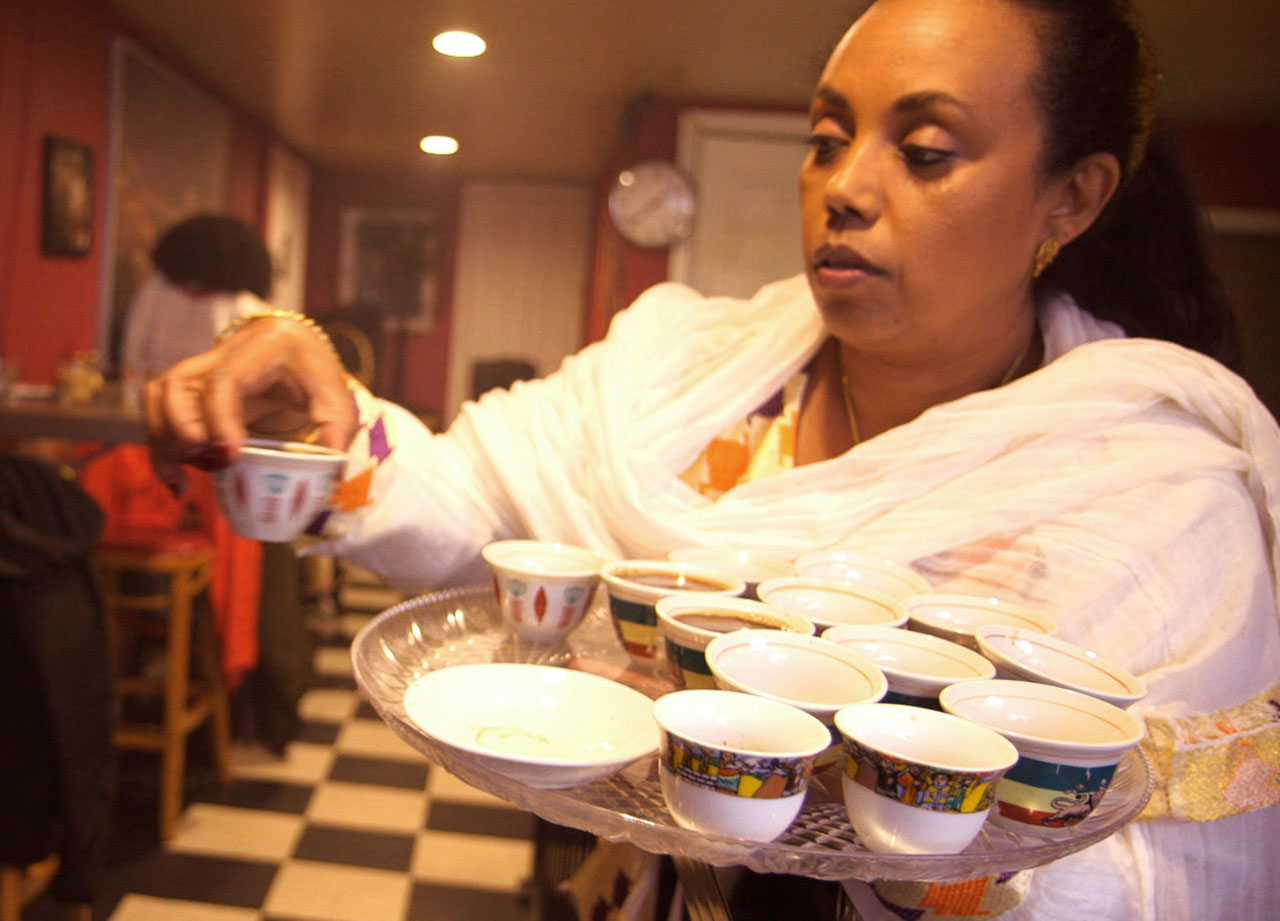 Seattle: Unsurprisingly voted America’s top city for coffee lovers. It’s the home of Starbucks — there is practically one at every other corner — and an abundance of independent shops roast their own beans and serve up gourmet blends. You never have to go far to grab a cup of joe. Or a grande triple-shot espresso with a hit of pumpkin spice.

But amid this bustle of a big-city, fast-moving, grab-and-go coffee culture, a slower, centuries-old tradition quietly thrives behind the doors of a handful of Ethiopian restaurants and shops.

At the Adugenet Ethiopian Kitchen & Bar, tucked in a row of shops and restaurants in the Hillman City neighborhood, owner Haimi (who goes only by her first name) serves up Ethiopian coffee daily. And sometimes — if you ask for it — she will do a whole coffee ceremony for you, granted you’re willing to take the time needed to enjoy the experience.

In Ethiopian culture, coffee is just one piece of a larger tradition. Another key piece is community. When the coffee is brewing, it is a time to stop, disconnect and let the world go by. Take in the aroma of the roasted beans and incense, and be prepared to socialize.

For artist and long-time Seattle resident Sultan Mohamed, the coffee is a reminder of home.

“I grew up with coffee ceremony every morning in Ethiopia,” he says.

“We call it nu buna tetu,” Mohamed says. Buna means coffee in Amharic and, as Mohamed explains, Nu buna tetu translates to “come and have coffee with us.”

Ethiopia is the birthplace of coffee. The Arabica plant, which produces the coffee beans that account for most of the world’s coffee today, was first discovered there over a thousand years ago. According to a popular legend, it was a goat herder named Kaldi who first noted the plant’s potential for consumption after his goats chewed on its fruit and became unusually active.

“Most Ethiopian coffee we find here comes from [the regions of] Yirgacheffe, Sidamo or Harar,” says Mohamed, who illustrated and authored a children’s book called Story of Coffee.

“You buy it from the market here, or sometimes when people come from Ethiopia, you ask them to bring you some to use at home,” he says. At the restaurant, Haimi makes the coffee from scratch. That means washing the raw, green beans, roasting and grinding them, then brewing the coffee in a traditional clay pot called a jebena.

It takes an experienced hand to know how dark to roast the beans for optimal taste and how fine to grind them for brewing in the jebena, which adds an earthy tinge to the flavor.

“If you make Ethiopian coffee out of a machine, it’s not the same taste,” Mohamed says.

Coffee from the jebena is strong and can be mixed with cream and sugar, but don’t expect flavored versions — no pumpkin-spice lattes here. Still, you will get something to munch on with your coffee, often popcorn, along with Ethiopian bread.

“The popcorn is about the harvest,” Mohamed says.

The bread is generally the Ethiopian flatbread, or sometimes it is injera — a traditional, spongy bread — served with a little bit of berbere spice-mix sprinkled on top.

The ceremony has spiritual aspects: Fresh-cut grass spread on the floor brings the smell of nature into the house, for example, and incense burning. Incense is commonly used in Ethiopian churches and mosques. When the ceremony is done at home, the incense burning is accompanied by elders offering prayers for the family’s good health, or for a good harvest.

“Muslims do it, Christians do it,” Mohamed says.

When Ethiopians sit down for coffee, the conversation may be about politics or what’s happening in the country, but often it is about family, Mohamed says.

“Sometimes we want to know what’s going on back home — how’s the family doing — and probably you want to send a little money [back home].”

The ceremony is done over three small servings — traditional Ethiopian coffee cups are about the same size as single-shot espresso cups. The first serving is called awwal, meaning “the first one.” It’s the strongest brew. Then, water is added to the same grounds and brewed for the second serving, the tona. Water is then added again for the third serving, Baraka. Each serving has the same brewing time. Because the same grounds are used, the coffee gets weaker with each brew.

“Once you sit in the ceremony, it’s best to sit through the whole process,” Mohamed says, “ though, sometimes people don’t finish the third serving.”

At the café, Haimi will treat you with her warm smile — even if you decide to pass on the third serving. The main point of the experience is to enjoy the buna and be a part of the community.

During the holidays, coffee is even more frequent at family gatherings — served six or seven times per day, Mohamed says.

As for getting your fill of coffee done Ethiopian style, be prepared to sit and savor the taste and experience a long-cherished tradition. It’ll be worth every minute.