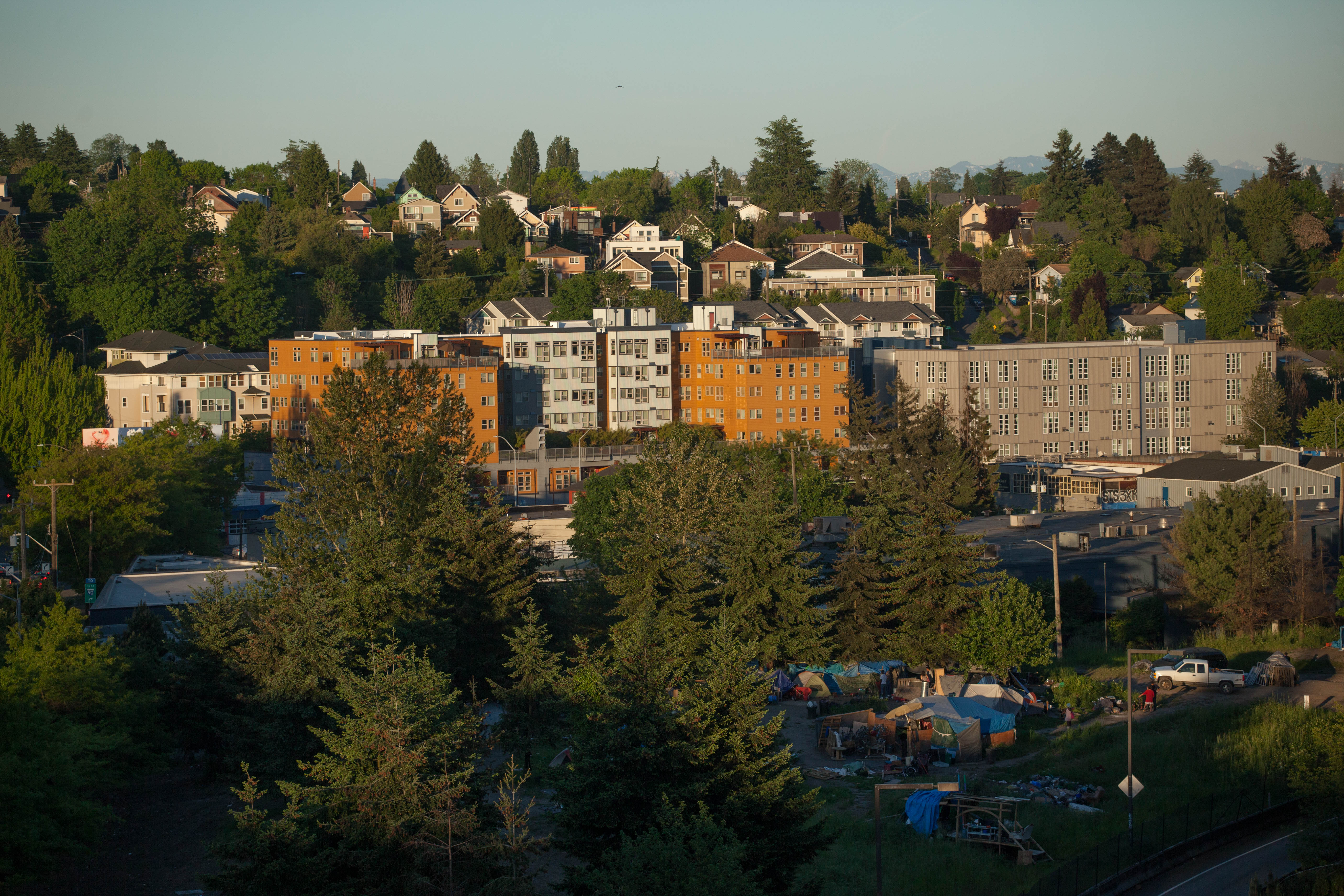 Homeless encampment seen off Dearborn Ave with newly developed buildings in the background.

In the time since Seattle and King County declared a homelessness state of emergency two years ago, the country elected Donald Trump, Mayor Ed Murray resigned after a slew of sexual abuse allegations, Jenny Durkan became the first female mayor in 89 years and the city’s median home value rose from $538,000 to $708,000.

Although methods for counting the number of people without stable housing have changed, all signs suggest the homelessness crisis has gotten worse, not better. At this last count, the number of homeless tallied exceeded the population of Woodinville. And so the region continues to exist under a state of emergency without any signs it will be lifted. Entering the third year of emergency, and as the number of deaths on the street climb, pressure to find solutions has grown.

Following an expensive 2016 dress down of the city’s systems for responding to the crisis, 2017 was supposed to be the year of shifting priorities: the new approach would move away from shelters open limited hours and toward 24-hour shelter with supports built-in. It would also turn away from “transitional housing” for people trying to find housing and toward “rapid re-housing,” using vouchers to place people into the private market.

In response to these new priorities, then Mayor Murray announced he would re-bid all the contracts between the city and homeless service providers.

But in an attempt to shift towards permanent housing, the city has faced questions about what that will mean for people in the short term. The fight that seems to ruffle the most feathers: Councilmember Mike O’Brien proposed more leniency for vehicles being used as homes, a proposal that was met with swift opposition. And as was the case the year before, the city’s policies on so-called “sweeps” — clearing out unsanctioned homeless encampments — has spurred the most emotion in City Hall.

And with the new focus on using rental vouchers in the private market, some service providers are concerned that King County’s fierce housing market will make it difficult to keep those people in housing.

Then, this fall, the desperation to get on top of the problem came to a head on two fronts. First, during budget negotiations, Councilmembers Mike O’Brien and Kirsten Harris-Talley were unsatisfied with the level of investment for combating homelessness in interim-Mayor Tim Burgess’ proposal. As a counter, they proposed a new tax on large businesses in Seattle to bring in over $20 million additional dollars a year for homelessness.

For Seattle’s left vs. more-left council, the proposal was the ultimate wedge between competing wings. For its proponents, it was the only logical answer for the worsening crisis. For opponents, it was a tax on jobs. The end result was the tensest set of budget negotiations in recent memory, culminating at times with activists accusing tax opponents of having blood on their hands.

The tax failed, but with a commitment to reconsider in the coming months.

The other major culmination was the unveiling of the new contracts between the city and service providers. As promised, the money tilts away from providers of basic “mat-on-the-floor” services and toward more comprehensive shelter. It also asks providers to show they’re moving people into housing.

This too sparred concern, especially from providers of short-term shelter who wonder where those who use the shelter will go. That the city council did not earmark funds for transitioning to these new priorities has some service providers worried the city could see a spike in the number of people on the streets.

Since this time last year, Seattle has had three new mayors. Murray clearly believed he would have more time to tackle the issue. But in 2018, it will be Durkan’s burden to bear.