Out with the old police chief, in with the new. Or not? 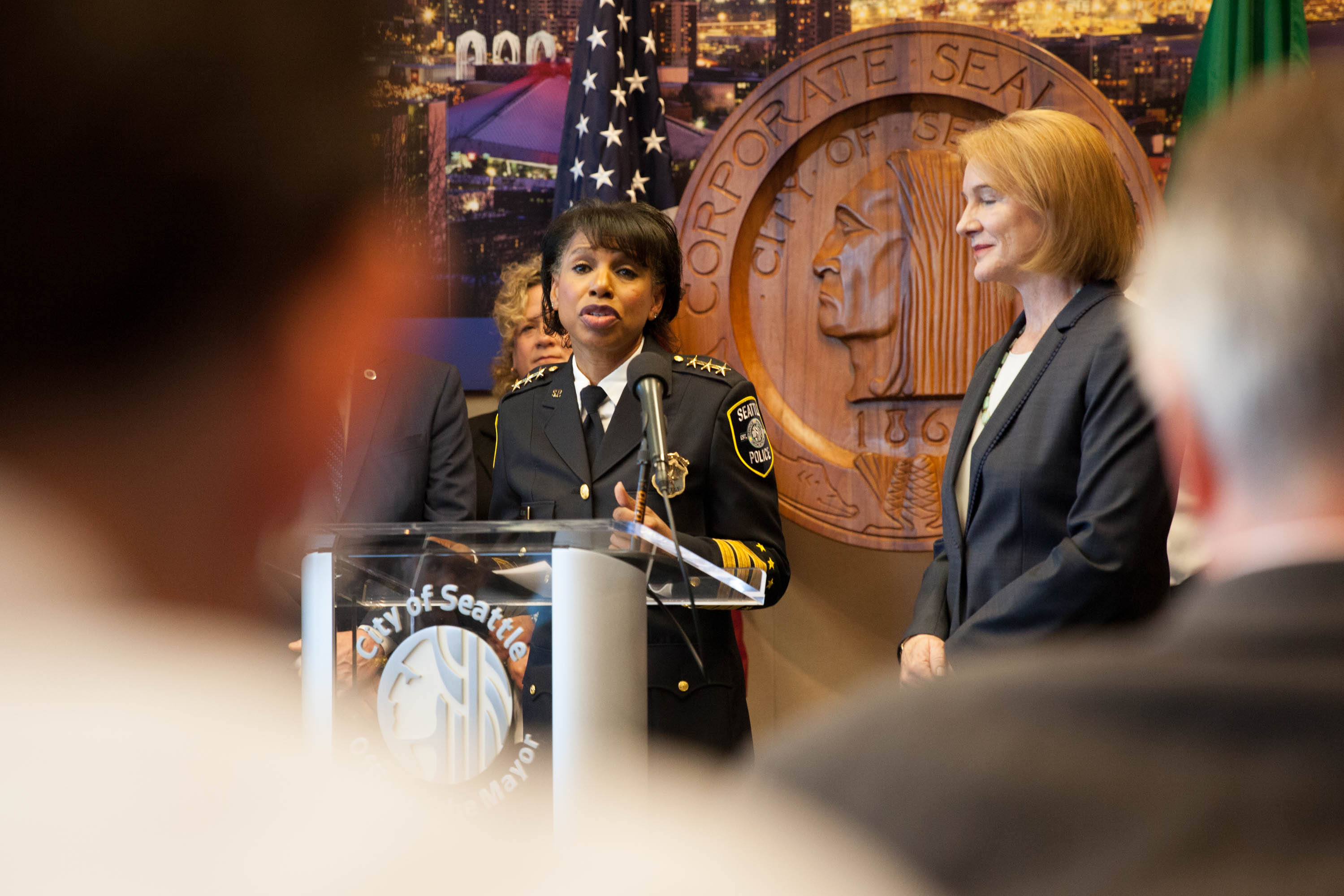 When Seattle was looking for a new Chief of Police in 2014, the three finalists all had one thing in common: They were from somewhere else.

Now, in just her second week on the job, Mayor Jenny Durkan has to find a replacement for Kathleen O'Toole, who ascended the police force in Boston and worked in Ireland before coming to Seattle. O'Toole is stepping down as chief to spend more time with family.

So far, the only known applicant to replace her is Deputy Chief Carmen Best, a 25-year veteran of the Seattle police force and soon-to-be interim Chief come January 1.

Durkan has promised a sweeping, nationwide search to find O’Toole’s replacement, saying she's looking for the most qualified candidate to lead a police force of 1,400. But in making her final decision, Durkan will have to consider whether she wants yet another outsider or someone who has risen through the local department. Her choice will show how she views the department: whether it's a body still in need of fresh eyes and an outsider's perspective or it's one that's on-track and in need of a steady hand.

During the campaign for mayor, Durkan said she would consider both types of applicants. “I would always consider someone internally,” she told Crosscut in September. “I think that you have to give people a shot. We’ve got lots of great homegrown people in Seattle.”

Former King County Sheriff Sue Rahr, who is the director of the Washington Criminal Justice Training Commission and co-chair of the search committee to find O'Toole's replacement, acknowledged the hiring committee will look at both the "positives and negatives" of hiring an outsider versus promoting someone from within.

Rahr rose through the ranks to become Sheriff, but said she came to appreciate an outsider's perspective when a panel was formed to examine departmental misconduct.

"That’s a very painful, difficult way to get outside eyes, but it was really beneficial to me to look at things that I just accepted," she said.

But an outside hire, Rarh pointed out, could require a much steeper learning curve and more effort to win officers' trust — a risky prospect as the department’s tenuous reforms take hold.

Hiring someone internally offers continuity and a better chance at built-in trust from the department’s rank-and-file. That person is also more likely to have a nuanced understanding of the nooks and crannies of the state’s largest police force.

State Representative John Lovick, a former Snohomish County Sheriff who was on the 2014 Seattle police chief search committee, said department veterans can come with baggage. "Sometimes you feel you owe an allegiance," he said.

When O'Toole was hired in 2014, the department was still reeling from scathing reports by the Department of Justice about excessive force and had just signed a consent decree to reform itself.

"The time and the moment when the last search took place was kind of pivotal for the city and the police to begin to grapple with the implementing of the consent decree," said Michael Ramos of the Church Council of Seattle, who was on the 2014 search committee. "So that time required someone who could bring a broad perspective and deep experience to try to help usher forth some of the reforms that were called for by the DOJ."

In the years she held the post, Chief O’Toole was the oft-recipient of glowing praise from those in power. She had her detractors, both inside and outside the department: Councilmember Kshama Sawant has been especially critical of her response to police shootings; and she was slammed with a $2 million settlement, covered by the city, for allegedly retaliating against a sergeant and a captain.

But a more potent image of O'Toole, entirely deserved or not, likely to stick in the public's mind is that of her sitting next to Michelle Obama during President Obama’s final State of the Union address. Or, as the leader overseeing the plodding progress of every new report about the department's progress toward reform.

“I think one of the really distinctive gifts that Chief O’Toole brought us was displaying no fear or reticence in collaborating with community partners,” said Lisa Daugaard, Director of the Public Defenders Association. “This cannot be underestimated and should not be taken for granted. That’s a sea change from the past.”

One weak spot, Daugaard noted, may have been that she was an outsider. “I think one also can’t miss that it’s very helpful to have a degree of insight into the interior landscape of the department that is impossible to have when you walk in cold as she did." Daugaard doesn't blame O'Toole specifically, saying any outside hire would struggle with this, but notes the "hidden shoals," positive and negative, an outsider may miss.

Ramos, Rahr, and Lovick, all members of the search committee that found O'Toole, deny they were explicitly looking for an outside candidate at that time. But in recounting why they preferred O'Toole they said her perspectives on policing and reform from her years spent in Boston and in Ireland helped.

As far as internal candidates go, Tacoma native Deputy Chief Best, 52 and African-American, is a clear favorite. She's spent her whole police career with SPD and, already second in command, the Army-veteran has support and respect from both community advocates and high-up officials.

Speaking after O'Toole's announcement, Rev. Harriett Walden, the founder of Mothers for Police Accountability and member of the Community Police Commission, spoke glowingly of Best, casting her as someone with ties to the greater community, including the African-American community.

Best also has support internally. In a statement, the Seattle Police Officers Guild, the rank-and-file union, said, "Chief Best has come up through the ranks and SPOG has full confidence in her ability to lead the department and to continue the work that was done by Chief O’Toole."

Said Lovick: "If I had the ability to pick the next police chief, she would be my first choice."

Ramos, too, said, "I know her and respect her and have every reason to think highly of her."

If Best were tapped, Daugaard said, "I would view that very positively.... Chief Best knows how to work with community leaders."

Since O'Toole became Chief, the city has passed a new suite of accountability reforms, which, pending SPOG negotiations, promise to add more civilian oversight. Officers must now go through significantly more training. And, in theory, body cameras are on their way.

There is still widespread public dissatisfaction, most pointed in recent weeks after an internal review found the shooting death of African-American mother Charleena Lyles to be within policy. But the department of 2017 is changed from 2014 and with it the question of who should be its leader.

"I think building internal cohesion of the department is a really important step right now," said Rahr. That sounds like an endorsement for hiring within, but Rahr said it's not. "I don’t want to be so exclusive that only an internal candidate can do that."

Durkan said Monday she hoped to have someone hired by spring. When asked if that was possible, Rahr hedged. "Could be," she said.