Seattle's game board of sidewalks 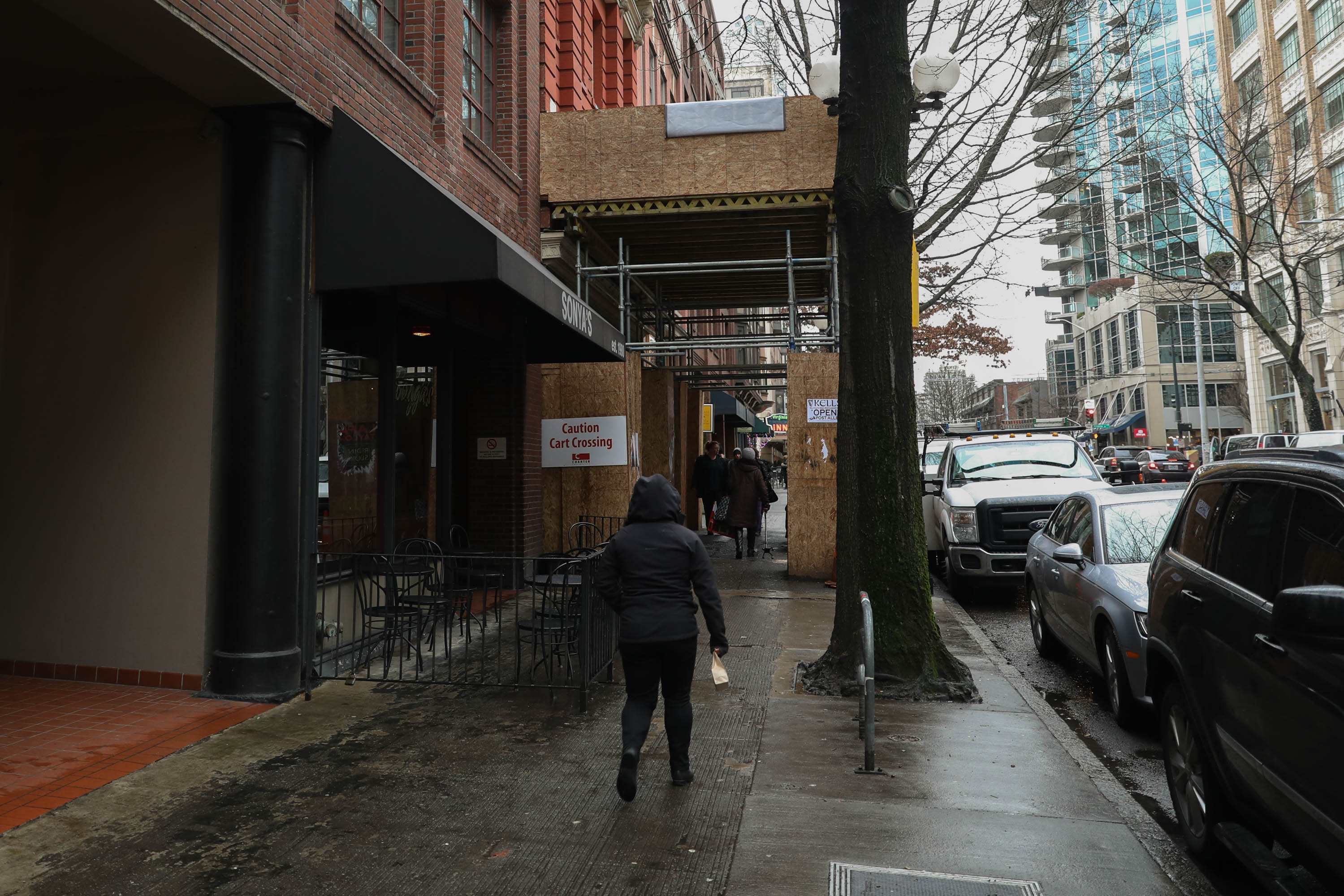 Pedestrians walk along a section of First Avenue in Seattle's Belltown neighborhood.

Why can’t we fix the sidewalks?

The city should be easy and welcoming to walk around. But in downtown Seattle, we have a long way to go.

Good sidewalks are basic, but getting them done is a challenge. Maybe it’s because there’s no big emergency, and not much glory, either.

Sidewalks are humble. They’re at their best when they are unnoticed.

But it’s hard not to look down at them while walking around downtown, because everything from patchy paving to planter cutouts can literally trip you up. Crowds make it even harder. The city is like a game board of many sidewalks — good, ugly and under construction.

One stretch in downtown Seattle, on the west side of First Avenue between Stewart and Virginia Streets, tells the story. It was built out over a century. Part of the block  is city-owned housing. Heights are limited. New buildings are not likely anytime soon.

In the center of the block is the Butterworth Building, a landmark that dates from 1903, like nearby Pike Place Market. It’s literally a haunt, historically a funeral home. Owner Patrick Pearse McAleese just wants to reopen open it as a brewpub, connecting back with his popular bar on Post Alley, Kells.

McAleese will build a nice new sidewalk in front, on First Avenue. Only next to his building, of course. Right now that section of sidewalk is a swath of black asphalt and aggregate paving, the kind you might put in a suburban driveway. It was built to city specifications a few years ago as a temporary measure while plans evolved for renovating the Butterworth Building.

But when it’s all said and done, the rest of that sidewalk beyond the Butterworth property, all within the public right-of-way, will stay a decrepit mess of aging concrete patched with asphalt. It’s legal, and unfortunately it’s not isolated or unusual — even in the center of the city, where sidewalks have been in place for many decades and boom times have brought plenty of construction.

The improved section in front of the Butterworth Building will stand alone in large part because, in the city of Seattle, sidewalks are primarily the responsibility of the adjacent private property owner, and they don’t get rebuilt unless that owner has the means and the desire. Many never do.

It’s not for lack of good ideas or street projects in downtown.

Planners have been busy on Pike Pine Renaissance, a huge corridor improvement plan for Pike and Pine streets, all the way from the Seattle Waterfront to east of  I-5. It will seal the link between downtown Seattle and Capitol Hill. 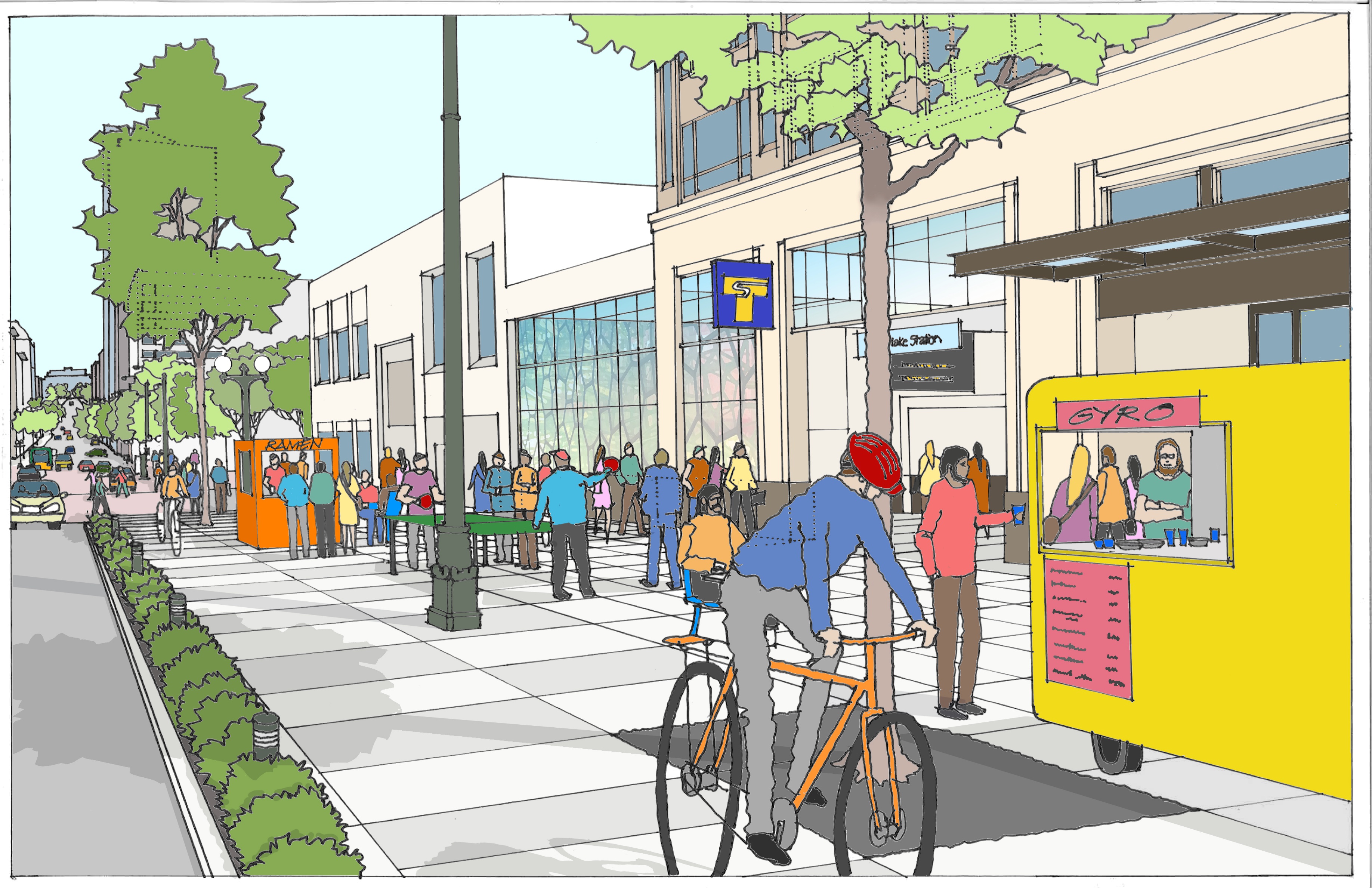 An artist's rendering of a new sidewalk for the Pike Pine Renaissance project. The view would be Pine between Third and Fourth avenues. Credit: City of Seattle Office of the Waterfront

The stretch of sidewalks along those streets will be consistent, recognizable and inviting. Paving, plantings and resized walkways in some places all play a role. Crosswalks will be prominent, drawing pedestrians through the city. The plan and budget are packaged with improvements to the Seattle waterfront and the coming addition to the convention center, so construction is virtually assured. This is good news for the city.

Still, landscape architect Shannon Nichol, who led early efforts to plan the Pike-Pine corridor improvements, has questioned piecemeal development of the public realm, and a system that favors “amenity over continuity.”

There’s the doughnut, for instance. That’s Nichol’s word for a typical sidewalk rebuild. Think of a large redevelopment project, the size of a city block. Naturally, the developer is interested in making things nice outside all of the new doors and storefronts on the block. In the meantime, city planners and plan reviewers have a wish list of pedestrian-oriented improvements just waiting for some desperately needed funding. Bingo. Private money comes to the rescue, but only for the doughnut — the sidewalks that surround the redeveloping block. It’s great for the project and the block, but does little or nothing for the city or even for downtown as a whole.

Ironically, grand plans like Pike Pine Renaissance are more likely to get done than upgrading little old sidewalks. Even a big investment in a single corridor is no guarantee. Traffic lanes and parking will get revised and transformed as part of the Center City Connector, on First Avenue from Pioneer Square, turning on Stewart Street toward South Lake Union. But sidewalks will almost certainly be bypassed. According to a source inside the design team, there is nothing in the streetcar package that would upgrade the patchy walkway along much of the route.

Someday we may have great sidewalks — after all private owners have rebuilt to new standards. Just this month the city released Streets Illustrated, an up-to-date design resource with a comprehensive guide to remaking walkways to be more consistent and welcoming to pedestrians. It’s modeled after similar online guides in other cities like New York and Los Angeles, but Seattle’s is more multi-layered and interactive than those cities’, according to planner Susan McLaughlin, and goes into greater detail. It makes a clearer distinction than ever before between major arterials, at one extreme, and neighborhood streets where cars must pull out of a center lane to let another car pass. In the meantime, though, downtown pedestrians can’t walk in a straight line.

Voters approved over nine hundred million in transportation funding in 2015. Most will go toward signage and painting intended to increase the safety of drivers and bicycles as well as school children and other pedestrians. According to SDOT’s official webpage, 28 percent of the streets in the city — near the north and south extremes — lack any sidewalks at all, thus making completing the network the highest priority for sidewalk construction money. Levy money will only begin to cover it.

The pedestrian environment is too important to be held hostage to the whims of property owners. Seattle should take cues from progressive cities like Auckland, New Zealand, and take more ownership of public infrastructure, including sidewalks. That would mean controlling funding and construction, as well as design and standards.

In the meantime, we may have to depend on the generosity of civic-minded developers, and settle for doughnuts.