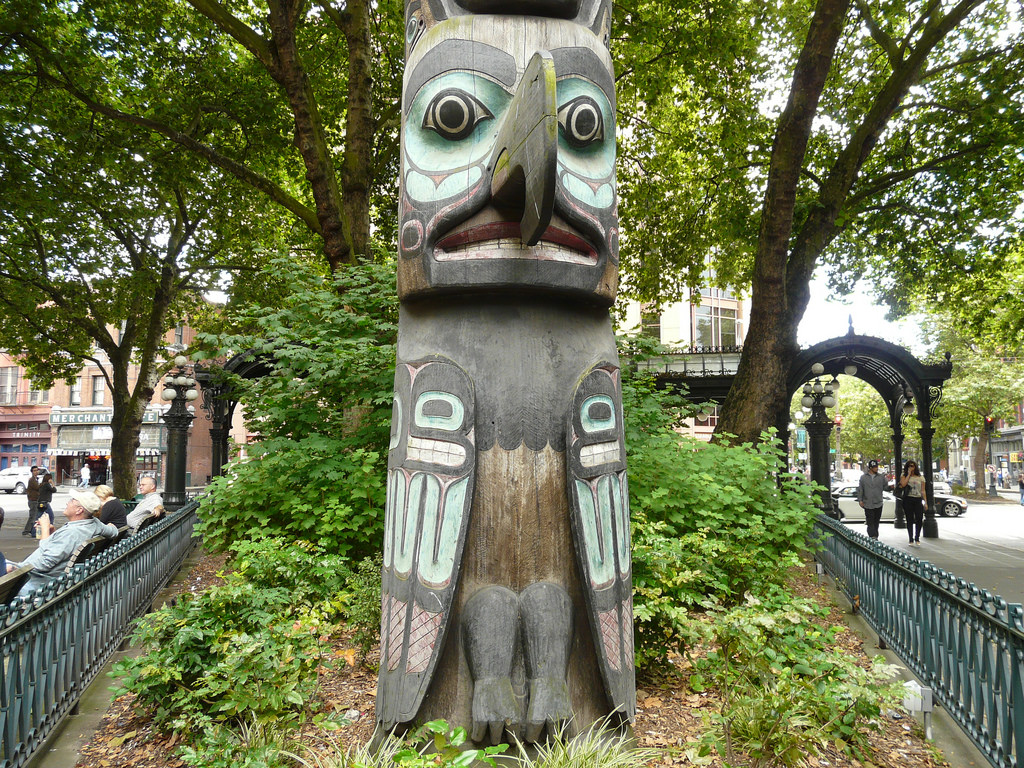 Detail of the Tlingit totem pole in Seattle's Pioneer Square.

As Washington state and the nation wrestle with Confederate monuments, controversial statues and memorials, it turns out that outrage, vandalism and removal are nothing new.

That was a message that came through at a recent panel on the history of regional statues sponsored by the Pacific Northwest Historians Guild at Seattle Pacific University.

One of the participants was Robert Spalding who has a book coming out next fall. “Seattle’s Monuments, Memorials and Markers” surveys the city’s plentiful, if not necessarily coherent, story in such things.

He points out that Seattle’s first “heritage memorial” was the stolen Tlingit totem pole that was raised in Pioneer Square in 1899. The current totem is a replacement obtained by legitimate means. But the original was taken from an Alaskan village by a group from the Seattle Chamber of Commerce and the Seattle Post-Intelligencer and raised as a symbol of Seattle’s central economic role as “gateway to Alaska,” a literal land of gold. In other words, it was a kind of declaration that everything between Seattle’s then central business district and the Far North was ours and ours to exploit. Putting the pole in Seattle was justified as both a symbol of commerce, but also as an act of historic “preservation,” Spalding says — saving a neglected artwork of a dying people was how one of its raisers explain their benevolence in having stolen it.

There was some public and media outrage at the looting of the Alaska Natives. The pole was burned by an unknown arsonist in 1938, and later replaced by one that was not stolen but carved for the purpose.

More controversy attended the iconic statue of Chief Seattle that sits near Fifth Avenue at Tillicum Place in Belltown, not far today from the Monorail. Spalding says the original idea was to erect a winged Mercury, but instead, Chief Seattle, the city’s namesake and founder, was honored. When it was put up in 1912, a large contingent of the crowd consisted of businessmen dressed in the Northwest indigenous garb, including shawls and woven conical hats, and wore the equivalent of “blackface."

But only a few decades on, Spalding says, people began to question whether the chief was a fitting symbol for a modern city. The statue and its square fell into neglect by the 1980s.

As should be apparent, when statues go up here, they’re usually not raised by the public, but by private groups with agendas. In the case of the totem and chief, the agenda was largely promoting business and the appropriation of heritage by “benevolent” victors who thought Native culture sent a message that was good for commerce and image.

Monument sponsors range from the Chamber to the Daughters of the Confederacy to various ethnic groups like the Norwegian Americans who put up a giant statue of Leif Erikson at Ballard’s Shilshole, or the Italian community that commissioned a figure of Christopher Columbus which used to sit on the waterfront at Pier 57.

I say used to sit because Spalding told us the story of how city arts board members thought it was a lousy work of art. Even some of its sponsors in the Italian community had hoped for a less abstract and more realistic likeness of Columbus. It was once dubbed the “World’s Ugliest Statue of Columbus.” Unloved, it also became a magnet for protest as people objected to the genocide that Columbus commenced in the Americas. Protesters took to splashing red paint on the sculpture. It was removed and put in storage in 2012 and there it sits. Word is it won’t ever return to public property.

Vandalism is sometimes the chief source of protest. Fremont’s Lenin statue has received the red paint treatment. So have the old Highway 99 Jefferson Davis Highway markers that are now on private land in Ridgefield. The vandals claimed it was in retaliation for what happened this year in Charlottesville, Virginia, where protests about a statue of Robert E. Lee turned tragic.

Those Jefferson Davis markers are a story unto themselves, and have been in the news off and on since early this century, when a Snohomish County legislator, Hans Dunshee, questioned the appropriateness of Highway 99 from the Canadian border to the Columbia River in Washington being memorialized for the president of the Confederacy. When Dunshee first proposed the markers be removed, the Rush Limbaugh crowd went crazy and death threats ensued. But the markers finally were removed and wound up in private hands. It turned out that the state had never officially sanctioned them, but had given in to pressure by the state chapter of the Daughters of the Confederacy. They were part of a plan to promote white supremacism back in the 1920 and '30s.

The Jefferson Davis markers had their defender at the panel. Rick Solomon, an attorney and past president of the Puget Sound Chapter of the Civil War roundtable, said Confederate figures were not “one-dimensional figures.”

He professed a passion for the study of Confederate generals, claiming that many Confederates fought not for slavery but for their state and states' rights. He said that he liked Confederates because they were “the underdog.” As an aside, he also claimed that they “may very well be right” that there is a right to secede from the Union — as if the Civil War had not settled that question.

Before the Civil War, Jefferson Davis served in the U.S.-Mexican war, in Congress and the U.S. Senate, and as Secretary of War under President Franklin Pierce. He approved military roads in our region. But most notably he was president of the Confederacy and led a bloody campaign to break up the nation in defense of slavery — this was the “state right” Davis and his armies fought for. “This is part of our history for better or worse,” Solomon said. That last statement is true: It is part of our history, but I think the better or worse question is resolved. Defending slavery was not only worse, but the worst. Honorary markers suggest otherwise.

I came away from the discussion with the sense that the notion of permanence for monuments, markers and memorials is an illusion. They are often made of bronze and set in granite, but our relationship to them is much more dynamic. Some wind up neglected, others become inappropriate, others help us reflect on our values. They serve as public flash points for discussion and controversy. Statues might be set in stone, but we, the living, are not.