What Vancouver, B.C., can teach us about housing 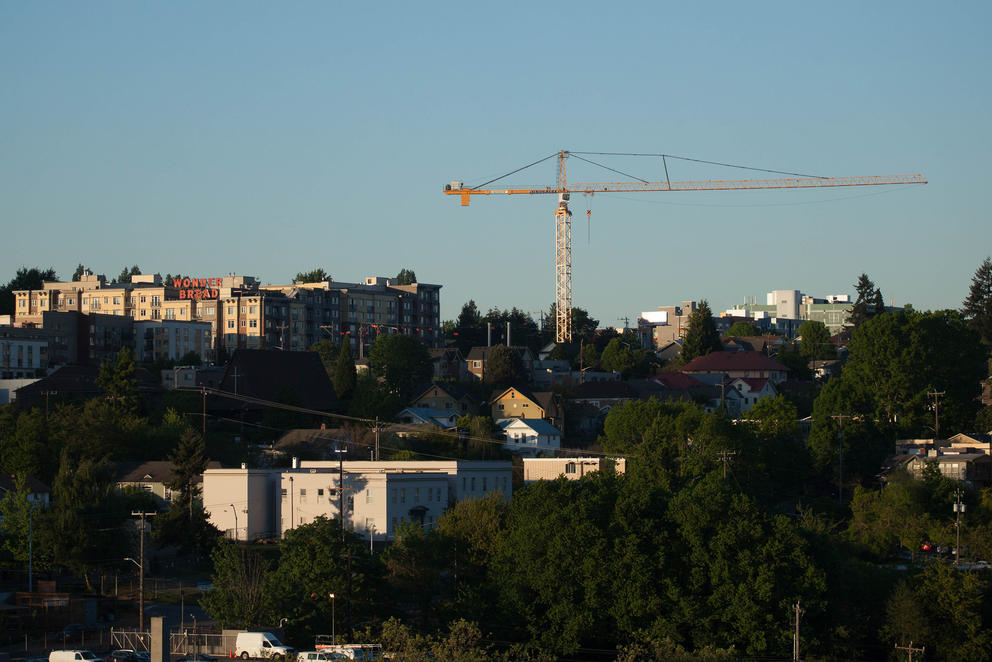 A construction crane above the Central District in Seattle.

The Seattle area’s increases in home prices led the nation for the 13th straight month in November, the longest-ever such streak for real estate around Puget Sound. That meteoric rise has made it ever harder for the region’s booming population to buy a home. But if we think it’s difficult in Seattle, look 140 miles north to Vancouver, British Columbia, where experts say house prices are like those of San Francisco but incomes resemble those of sleepy Halifax.

Why the disconnect between the price of a house and what residents can earn locally? Many point to real-estate speculation. The results are sad-but-true websites like Crack Shack or Mansion?, which vividly illustrate the deleterious effect of speculation as run-down houses fetch over $1 million Canadian, and prompt a grassroots campaign by young Vancouverites who angrily profess #DontHave1Million.

Housing affordability remains front and center for new Mayor Durkan. On Monday, she announced plans for spending $100 million on affordable housing projects and, in her first official act, she signed an executive order to assist rent-burdened lower income households by streamlining access to the city’s Utility Discount Program and creating a Seattle Rental Housing Assistance Program. Meanwhile, repealing the state ban on rent control is potentially on the docket in Olympia, although some experts believe that approach is counterproductive.

Dealing with rents is one thing. But what about tackling runaway home prices? Trying to actively slow or even reverse the rising value of houses may sound like political suicide in a country where, for good or for ill, homeowners often view their house as an appreciating investment. In metro Vancouver, a broad-based political coalition actively wants to see the cost of housing go down. The consensus was strong enough to boot the conservative B.C. Liberals in May elections that saw the social-democratic New Democratic Party (NDP) take control of the provincial parliament for the first time since 2001.

In Seattle, the fear is that the city could see more cases of speculators who “flip” properties, buying them just to resell a short time later, and that like Vancouver we risk becoming a “hedge city” — a place where the global rich park their money in houses and condos that they live in part-time at best but mostly purchase as a safe place to put their assets.

Both of these phenomena represent a new trend that treats housing as an investment commodity rather than a home, something the United Nations Special Rapporteur on the Right to Adequate Housing calls the “financialization of housing.” During an interview earlier this year in Geneva, the rapporteur warned me, “There is so much excess capital floating around and real estate is just that valuable and safe compared to other commodities.”

There are definite similarities between the two biggest metropolitan areas in the Pacific Northwest. “The market pressures are enormous in both Vancouver and Seattle,” Vancouver Mayor Gregor Robertson told me last year. “We have many of the same challenges.”

But there are key differences. Canadian immigration policy makes it easy for well-heeled foreigners to receive residency, and they’re the ones snapping up Vancouver’s booming luxury condo market to the detriment of renters. By contrast, our cranes are mostly building apartments — a Washington law discourages condo development — and locals in the tech industry are making the kinds of salaries that can afford now-expensive Craftsmans, though believers in speculative influence suggest that even tech money can’t explain Seattle’s current price boom.

Ultimately, these distinctions make for important differences when considering which approaches Seattle, King County and Washington could take to curb real-estate speculation. Crosscut consulted with three experts in the Vancouver housing market to find out what the region has done and what its provincial government is now considering to push back against the rampant speculation that has created a housing market wildly out of sync with what people in Vancouver earn.

The Canada Mortgage and Housing Corporation’s research arm defines speculation as buying and reselling a property within two years and economists have described “astronaut families” who live part-time in Vancouver as a characteristic of a hedge city. But Vancouver has struggled to measure the actual amount of speculative activity taking place.

While Vancouverites can feel the impact anecdotally, urban planner Andy Yan, who coined the term “hedge city,” says the data to make strong empirical claims is lacking. Yan, the director of the City Program at Simon Fraser University, gave the city a grade of “not very well” when it comes to tracking who is buying real estate, where the money is coming from, whether anyone is living in the home, and how soon the property is sold. He chalked up the deficiency to Canadian cities’ weak role in the country’s confederation system, which is not the case in the U.S.

“[King County], you have a tremendous power,” Yan said. “You are able to respond in a much more agile way than metro Vancouver.” This issue became a political football in the Seattle mayor’s race here when City Councilmember Lisa Herbold, taking advantage of the strong collection of housing records here, requested data from King County Assessor John Wilson. The resulting discussion led to Wilson expressing concern about creating a data set based on national origin and, after a series of questions from reporters, Durkan accusing Moon of anti-Asian racism for her interest in information related to possible housing speculation. Yan, a third-generation Chinese Canadian, disputes that collecting speculation data is racist.

But all that may be beside the point when it comes to policymaking. Simon Fraser University economist Joshua Gordon cautioned against an overreliance on data. “Often what you find in this realm is that the call for data and better data is used to forestall policy,” he said. “We don’t need to know exactly how much cancer is being caused by smoking to know we want to tax smoking.”

At the municipal level, Vancouver City Hall’s most visible response has been a 1 percent tax on empty homes — ones that sit unoccupied more than 180 days per year. It went into effect this year, but leaves Gordon nonplussed. “If the ambition was to free up rental and discourage speculation, they should have done it more boldly,” he said. At 1 percent, the tax is comparable to what King County homeowners already pay in property taxes and so not likely a big deterrent here, where the empty-homes phenomenon is less acute than in Vancouver.

Ultimately, Gordon sees it as a political move. “The empty homes tax was introduced partly in the context of a provincial government not willing to do much, so it was an effort to be seen to be doing something,” he said.

University of British Columbia business professor Tom Davidoff has read anecdotal reports that the number of rental listings bumped up once the tax went into effect, but rents overall have not ceased to rise in the Vancouver market. Still, he sees no problem with a jacked-up tax rate if a rich owner wants to leave a house unoccupied.

“The city would say the goal is not empty houses. I say: It’s OK there are empty homes,” he explained. “If you charge a high enough tax rate, it’s fine either way. Other taxes can be lower and you can spend the money on affordable housing.” But in the larger scheme of Vancouver’s speculation problem, Gordon doesn’t see this issue as the prime culprit. “The empty house phenomenon is very potent in the public mind, but it still doesn’t capture the entirety of the problem.”

Under Washington’s political system, the city would presumably have to receive state authorization to enact such a tax.

In 2016, the provincial government passed a 15 percent tax on foreign buyers, who are widely viewed as the driving force behind Vancouver’s overheated speculative housing market. There was an immediate drop in house prices and the Seattle Times reported that the Emerald City vaulted to the No. 1 most searched market on the Chinese equivalent of Zillow. But more than a year later, entry-level Vancouver housing continues to rise at such a rate that it would take years for incomes to catch up.

“The foreign buyers tax was not a panacea by any means for affordability,” UBC’s Davidoff said. “In fact, affordability has now significantly deteriorated from where it was before — the tax is not necessarily the cause, but it didn’t make [Vancouver] more affordable.” While Gordon agrees it wasn’t “a cure-all,” he says the goal was not to achieve affordability on the strength of that policy alone. Indeed, all three experts agreed that only a suite of policies addressing both the supply and demand sides of housing would be successful in reining in speculation and making housing more affordable for people who live and work in metro Vancouver.

That said, in Gordon’s view, the tax was important. “It raises revenues, discourages speculation, and sends a signal to the market that the government isn’t going to allow housing prices to gallop toward the sky,” he said.

Still, in Seattle’s case, the concern is not exclusively money coming in from overseas like it has been in Vancouver, where purchasers from mainland China far outnumber, say, wealthy Torontonians. In our case, however, the outside influence could also be shell LLCs registered in tax-haven Delaware or hedge funds from Wall Street. A foreign buyer’s tax wouldn’t capture their investments in our market.

The Foreign Buyers Tax wasn’t good enough to save the fortunes of the BC Liberals, who passed it reluctantly in hopes of holding power but lost this year in provincial elections to the NDP. There is now a popular consensus in British Columbia that home prices have to come down; Gordon thinks prices will have to appreciate another 20 to 30 percent in the Puget Sound before that becomes the consensus here.

While the new provincial administration remains tight-lipped about its housing plans — spokespeople for the Ministry of Finance and Ministry of Housing and Municipal Affairs declined to comment — a group of economists, including both Gordon and Davidoff, is pushing the NDP to adopt a plan they call the BC Housing Affordability Fund. The proposed policy would set high property taxes that would be rebated for property owners paying income tax at that address or landlords with long-term tenants — both scenarios in which the property in question is being used for housing. Those just hedging their money with an empty house or renting out on Airbnb would not get the rebate.

The plan works well in the Vancouver context because Canada has high income taxes that pay for a generous social safety net, but low property taxes. As a result, Gordon said, “The world’s wealthy are always going to want to buy real estate and not necessarily pay their fair share, so if you’re going to drive up house prices, at the very least pay your fair share and make life easier for the people you priced out.” With the income-tax provision, the proposal would reconnect the housing market to the labor market in what Gordon called “a tailored balance between pushing prices down and getting revenue.”

Davidoff believes this idea could be adapted as a Seattle-specific measure to scare off speculators. While the federal mortgage interest income tax deduction has a similar effect, entry-level buyers and lower-income owners who take the standard deduction on their tax returns don’t benefit like they could with something similar to the BC proposal.

At its heart, the fund makes a sharp distinction on who is a legitimate player in the housing market. “If you’re not paying income tax at that address and you’re not a landlord, then what are you?” Davidoff asks. “You must have brought the money in from elsewhere.”