Five years after Sandy Hook, what is Washington doing about guns? 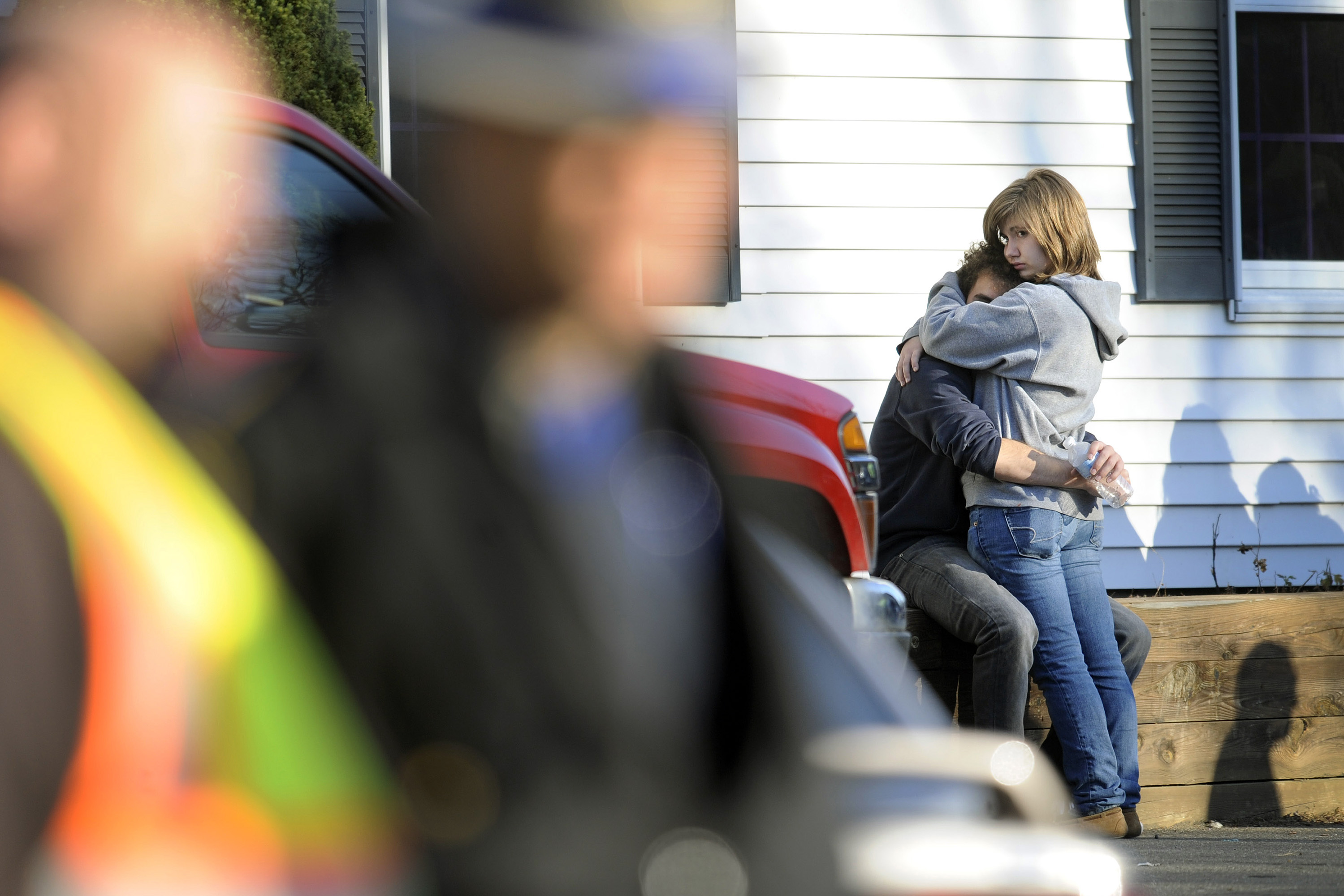 People embrace at a firehouse staging area for family near the scene of a shooting at the Sandy Hook Elementary School in Newtown, Conn., Friday, Dec. 14, 2012.

Five years after a gunman killed 20 children and six staff members at Sandy Hook Elementary School in Newtown, Connecticut, some state lawmakers see a chance to finally pass key gun-control and safety measures that have eluded the other Washington.

With Democrats’ new one-seat majority in the state Senate, plus control of the House and governor’s office, they anticipate a “historic session” on gun issues, said Sen. Jamie Pedersen, D–Seattle, speaking Tuesday at a press conference announcing the Alliance for Gun Responsibility’s 2018 legislative priorities. Pedersen will chair the Senate Law & Justice Committee when the Legislature begins its two-month session Jan. 8.

“I view this as one of my main charges in [the] Senate Law & Justice [Committee], to do something about addressing gun violence," Pedersen told Crosscut.

But, he admitted, “the bar is low” given how little the Legislature has accomplished in past years.

Top priorities for the Alliance and their allies in Olympia include bills to incentivize safe storage of guns and to require a license to buy semi-automatic firearms, similar to requirements for concealed pistols. They also want to ban “bump stock” devices that make semi-automatic rifles fire nearly as fast as fully automatic weapons, and which contributed to the high death toll in the Las Vegas shooting in October.

The tide in Olympia is shifting in favor of modest gun-control measures, advocates say. Much of that change has been led by voters, who in recent years have shown more appetite for gun-control policies than their elected leaders. In 2014 and 2016, sizable majorities passed statewide initiatives extending background checks to include private firearm sales, and allowing family members and police to seek court orders to keep guns away from those at risk of harming themselves or others.

“It is time for us elected officials to stand up and take leadership in this role,” said state Sen. Manka Dhingra, the Eastside Democrat whose November victory flipped control of the Senate.

Dhingra said she’ll sponsor gun legislation next session, including a bill that would keep guns away from those charged with a crime who have a history of violence.

Such changes in gun laws will be led by the wave of women elected to state and local offices in recent years, said state Rep. Nicole Macri, a Seattle Democrat who joined the House last year.

“We know that local communities have elected these strong women leaders for a reason — they want to improve the quality of life and improve safety in their communities,” Macri said at the Alliance event. Macri will be introducing a bill that overturns the state’s so-called preemption law, which prevents local governments from enacting gun laws that are stricter than state statutes.

Gun-rights advocates say an aggressive push by Democrats could backfire in the next election, potentially endangering Democratic seats in rural and more pro-gun districts.

“You’re talking about laws that could have a profound effect on a large segment of the Washington state population,” said Dave Workman, communications director for the Citizens Committee for the Right to Keep and Bear Arms, which shares a building and leadership with the Bellevue-based Second Amendment Foundation. “You run a risk of incredible backlash over that.”

Safe storage legislation — or “dangerous access prevention,” as the bill’s sponsors call it — is one Democratic priority that gun-rights lobbyists have blocked for more than a decade.

Modeled after a Florida law, HB 1122 seeks to prevent both children and people convicted of a felony — and anyone else prohibited from owning a firearm — from accessing guns stored in people’s homes. Last year’s bill provided for criminal penalties under some circumstances, but Sen. Pedersen said he is open to considering regulatory approaches or civil penalties.

Workman thinks such a law is unenforceable. “You can’t legislate against stupidity,” he said.

Reducing the risk of gun suicides, which make up 80 percent of gun deaths in Washington, is the goal of two additional bills lawmakers will reintroduce next session. More than 36,000 people in the U.S. died from firearms injuries in 2015, a significant increase from the prior year.

One bill (SB 5441) that has made the rounds in Olympia for at least three years would temporarily restrict gun access for people who have been involuntarily held for mental health treatment for 72 hours, not just those who have been involuntarily committed for more than 14 days. Pedersen admits that the measure is a “big stretch” due to National Rifle Association (NRA) opposition, even though similar bills had bipartisan support in the past.

The second bill (SB 5553) would allow people to voluntarily add their names to the list of those prohibited from purchasing a firearm.

“I'm hopeful that will give people who know that they have mental health issues an opportunity to take a preventive measure to prevent them from getting access to firearms in a crisis,” Pedersen said. He called it a “Libertarian idea,” co-sponsored by two Republicans, which has the votes to pass out of committee. If the "voluntary waiver" law passes, it would be the first in the nation.

For now, the two sides of the gun debate aren’t talking, though both assert they are open to dialogue.

“I don’t know any gun guys who wouldn’t be willing to sit down and talk to somebody about some of these issues,” said the Citizens Committee’s Workman. “They’ve just never been given the opportunity.”

Pedersen said he spoke with the NRA and Second Amendment Foundation last year about his voluntary waiver bill. “I implored them to give me comments on that bill and to tell me what would make it acceptable from their perspective, and they did not do that,” he said.

“And I told them that if they chose not to do that last year,” Pedersen continued, “that I was frankly not going to be as interested in their concerns about the bill if I were the chair of the committee and had the ability to run it through.”

This story has been updated to clarify that the Citizens Committee for the Right to Keep and Bear Arms shares a building and leadership with the Second Amendment Foundation.