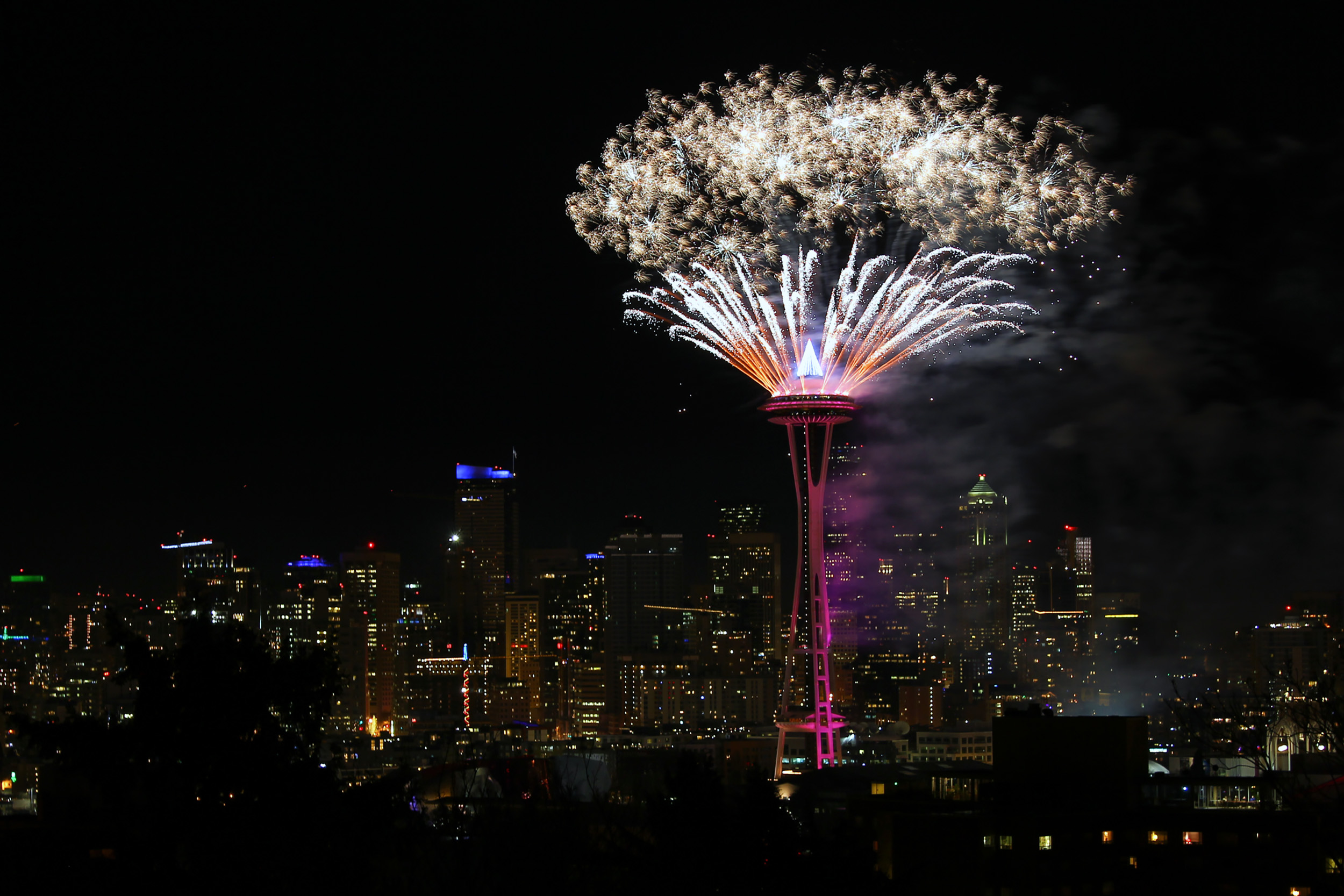 Fireworks launch into the air from the Space Needle on New Year's Eve 2015 in Seattle.

Did we enjoy the year just past?

Well, aught-eighteen is here at last.

Odds are, you wouldn't lose a bet

that it will be the warmest yet.

if we thought climate change was real.)

But hey let's ring ourselves a bell

and see what oolong leaves foretell:

Will Rocket Man renounce his nukes

trade in his missiles for some cukes?

Fat chance; why should our sanctions sway

folks we don't trade with anyway?

(But while we're noodging, let's suggest

his barber may not be the best.)

He called our Prez "old lunatic" —

a name, alas, that didn't stick;

it left the C-in-C stone cold —

he drew the line right there at "old."

The Winter Games will soon unroll

an easy morning's drive from Seoul.

Careening down some icy hill

may pack a little extra thrill

if you remember day and night

Kim's army is just out of sight.

In Russia, where sports doping's rife

this spring, the World Cup comes to life.

we lost that game at Trinidad,

so Jozy, Clint and all may be

(The former, though, did step it up

to keep the Sounders from the cup,

which they'll pursue again next year —

with Ozzie back? That isn't clear.)

and Assad’s staying, it appears,

have not persuaded him to walk;

the man’s not going anywhere —

as long as Putin wants him there.

Prince Harry will walk down the aisle,

eclipsing Brexit for a while.

about a prince who ties the knot.

The royals think that Meghan’s fine --

The Saudi world may start to reel

in June when women take the wheel,

which some of us will celebrate,

although it comes a little late:

they say that soon we'll all sit by

and leave the driving to AI.

Last year, if anybody cares,

the Emerald City had four mayors,

already that makes quite a few,

and now of course we have begun

all over for a new top cop

(some hope when she’s seen all the rest,

she’ll circle back to Carmen Best),

and someone (if the price is right)

to take the helm at City Light.

The city income tax, it seems,

is headed straight to the supremes

who probably will strike it dead --

as Durkan has already said.

The plan to upzone may soon stall;

We all know density is good —

in someone else's neighborhood.

with trucks that tumble wet concrete.

that vantage point will disappear,

the views will still be glorious —

but not for folks who ride the bus.

Remodeling is due to start

at SAM's museum of Asian art.

Which means a wait before SAM shows

that golden screen with all the crows.

The NHL may bless the town

and beam a hockey team on down,

which may improve substantially

the economics of the Key;

another team, another sport,

spell civic triumph of a sort —

yet what, exactly, will we fix

by watching guys skate by with sticks?

Stats for Segura and for Cruz

look good and yet the Ms still lose.

But he’ll be playing in LA.

The presidential tweets all show

that really, nothing is below

the dignity of him — good grief  —

for whom bands play "Hail to the Chief."

the question is, "did he collude?"

the only guys who'll take a fall?

Will we find out this year before

someone shoves Mueller out the door?

but what, exactly, have they done?

Execs have said said it isn't so

and they're the ones who oughta know.

The cash a firm no longer sends

may just engorge its dividends.

Who cares if soon the caribou

may have to jump a pipe or two;

and RIP for ACA

we've already seen quite a few

who are no longer getting byes.

have much in common with the right,

who cast their votes for ol’ Roy Moore.

most passed on Roy and picked Doug Jones.)

Will this soon be last year's news?

Just ask your waitress for some clues.

The Democrats may finally turn

away from Hillary and Bern

someone who's not on Medicare

and find the voters — live or dead —

to flip one house to blue from red.

so state Dems have the Senate, too:

is Inslee’s carbon tax in store?

The Bezos empire will decide

who gets the magic carpet ride

to high-tech jobs and rising rent;

and other stuff folks here resent;

but would we rather be Detroit?

Will prices rise at Mount Rainier?

If you want folks to stay away,

just nearly triple what they pay.

Although we're all for liberty,

of freedom that we had in mind.

or if they are, they swim back east.

If all this starts to get you down,

don't hire yourself a birthday clown.

Ignore the news from time to time;

you'll miss some tweets — is that a crime?

And now and then do have what you want --

Head up to soggy Skagit ground

to watch the snow geese fly around;

and drive out east in early spring

when orchards there are blossoming;

check out Town Hall, due back, it seems,

with more support beneath its beams;

— Aer Lingus nonstops start in May –

and any time, go hug a tree

that’s stood at least a century.

Look up to see a shooting star

and raise a glass – or jelly jar –

of pinot noir or pinot gris

to greet the year we hope to see.