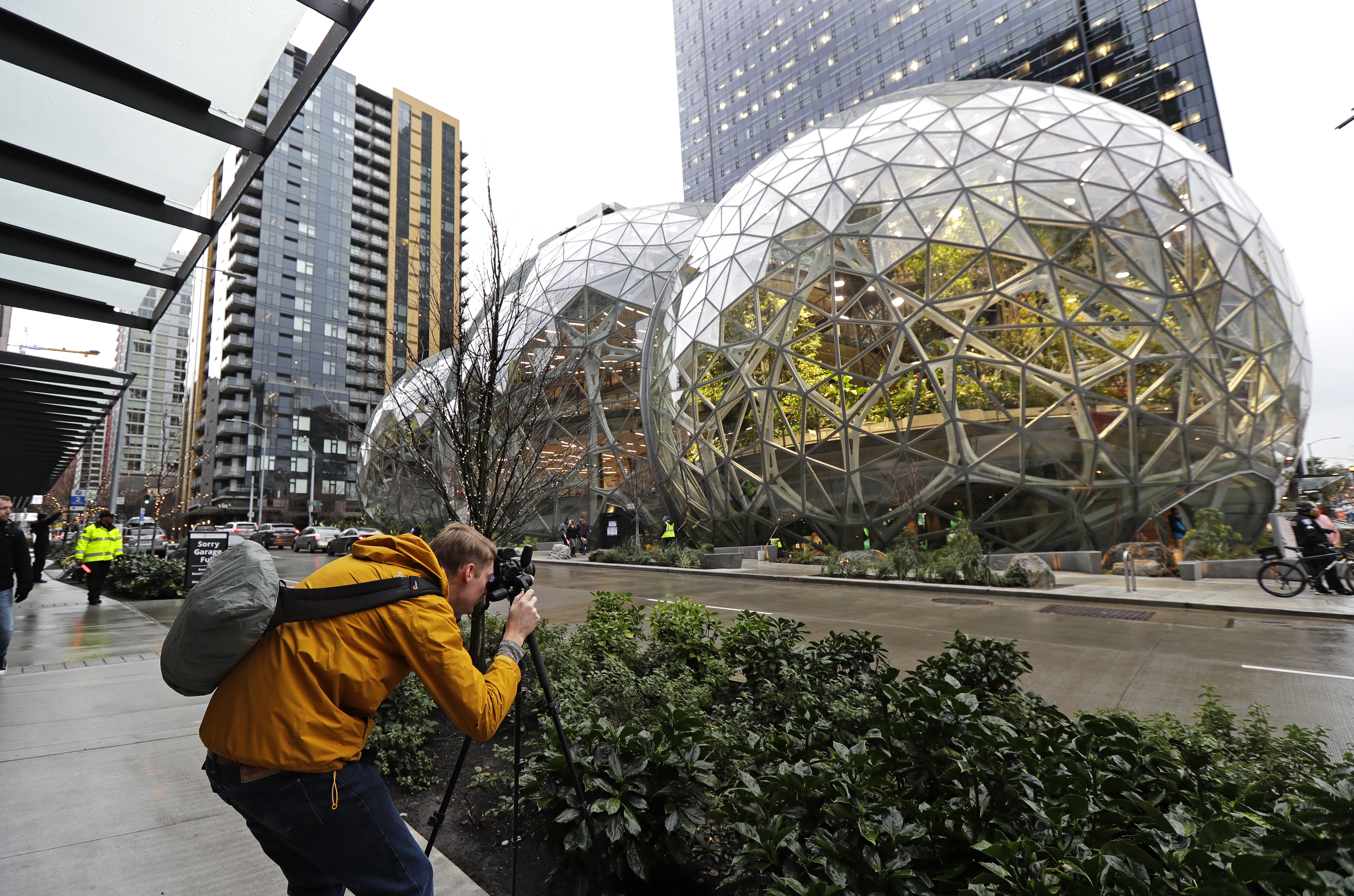 Alex Crook, a photographer with Seattle Magazine, photographs the Amazon Spheres in downtown Seattle on the day of their grand opening. Jan. 29, 2018, in Seattle. (AP Photo/Ted S. Warren)

Amazon has sprouted a cluster of bubbles in the Denny Triangle. The immediate question is: What do they mean?

Are they a new icon of Seattle innovation? A glass ark for rare tropical plants? Or a fishbowl of tech-worker privilege?

Many interpretations were voiced at the official opening of The Spheres, the architectural centerpiece of a three-block Amazon complex downtown. Essentially a combination of a high-tech greenhouse with casual office space for Amazon workers, they have been the subject of much speculation and opinion as they have emerged amid the high-rise hubbub of new towers and cranes.

At the complex’s official kickoff on Monday, company founder and CEO Jeff Bezos made a rare public appearance and commanded, “Alexa, open the Spheres!” Alexa replied, “OK, Jeff.” A circular light at the top of the center dome flicked on and it was done. The dome itself didn’t really open —while it was warm inside, Seattle rain was pelting the exterior.

The Spheres were a last-minute addition to the planned development. Amazon’s head of global real estate John Schoettler told of walking the flatlands of Belltown with Bezos in 2011 when it was a wasteland of surface parking lots and cheap motels. How could they remake the area and innovate where people worked? The idea came: Could they build a workspace that was the 21st century equivalent of the London’s Crystal Palace and Kew Gardens? Could they bring curated nature to an urban workspace?

Companies have long tried blending nature with big tech ambitions — think Thomas Edison, Steve Jobs and Bill Gates who all worked in the suburbs. But tech companies have shifted to cities and while beautiful campus grounds might have been pleasurable for people thinking big thoughts, The Spheres offer a closed environment that is available to Amazonians 365 days a year.

Amazon’s Spheres features a variety of meeting spaces on multiple levels where employees can work amid hanging plants and rushing water, perched next to some 40,000 individual plants, most from tropical zone cloud forests. (Yes, and note that a big chunk of Amazon’s success is its Cloud business.) It feels less like being lost in the jungle than being high in the tree canopy. One stunning forest specimen is a 50-foot-tall ficus tree named Ruby. It looks much happier than the one growing in my apartment.

Amazon hasn’t said how much The Spheres have cost, only that it is part of its $4 billion investment in Seattle. But they won’t be cheap to maintain: seven full-time horticulturalists are on staff, plus a supervisor. If Amazon’s business bubble ever pops I wonder what kind of ruins The Spheres will make as botanists bite the budgetary dust. Big dreams like this can be hard to maintain. Think of Weyerhaeuser’s much-lauded mid-century suburban campus with its landscaping and hanging vines. It became an unsustainable Federal Way white elephant.

John Savo, a principal at NBBJ, the lead architecture firm that did the project, said they worked out of a “desire to look at alternative ways of working.” The Spheres are as far away from cubicles as you can get. The idea is that people work better when nature is nearby.

Superficially, the feel of the space combines the cathedral structure of Chihuly Garden and Glass with upward views, the downtown Koolhaas library with its gridded metal-and-glass exterior letting in light and creating patterns, and the vegetative humidity of the Volunteer Park Greenhouse. The Spheres’ shapes are made of irregular pentagonal glass plates — 180 in all. The Spheres are like new and improved geodesic domes, but a step beyond Bucky Fuller ‘60s icons.

The gathering spaces are very appealing. Still, I found an immediate drawback. Within minutes I had to take my coat off, roll up my sleeves and I began sweating. Work-hour temps are set from 68 to 75 degrees with 60 percent humidity. Warm and humid is not my ideal work environment, but I’m sure there are plenty of Amazon employees drawn from across the country and around the world who will relish it.

Various VIPs at the opening pitched their own ideas about why The Spheres are special. Governor Jay Inslee said they represented Amazon’s powerful impact on the economy and the 40,000 jobs (one for each plant?) that the company has brought to Washington. King County Executive Dow Constantine called it a “dramatic architectural statement…and a new symbol for the region.” Seattle City Councilmember Sally Bagshaw used the occasion to encourage recognition of Amazon’s charitable deeds, including help with transportation, street safety and building permanent shelter space for Mary’s Place within its headquarters complex. It sounded like positive reinforcement for boosting Amazon’s eleemosynary activities.

Seattle Mayor Jenny Durkan made the point that the city needs to “nurture” all its residents, and she saw The Spheres as symbolic of that. “The Spheres are telling us to be mindful,” she said.

That echoed a larger idea that has grown with the project. Lead project architect Dale Alberda of NBBJ said the Sphere garden is a reminder of the larger ecology of the world; he thinks the project can raise the consciousness of Amazon workers and the public to the challenges faced in the global environment. In other words, it can be a kind of teaching terrarium for tech workers who might be too disconnected from the world outside.

There is another disconnect. The space is gorgeous, interesting; the concept quite creative. Visitors will love the space, and likely employees will too.

But only a huge corporation could support something like this. The café and fresh food, the beautiful environment for people who are paid to sit and think of how to sell us more stuff — it reinforces the idea that bubbles, as a form, are ephemeral zones of protected space with the rest of us on the outside looking in.

The proof of the Spheres’ success, noted State Sen. Reuven Carlyle, will be in how much access the public will have here. Will The Spheres’ transparency be an asset for the folks outside? That remains to be seen.