Best of 2017: Stop that plane — The frantic race to halt a deportation 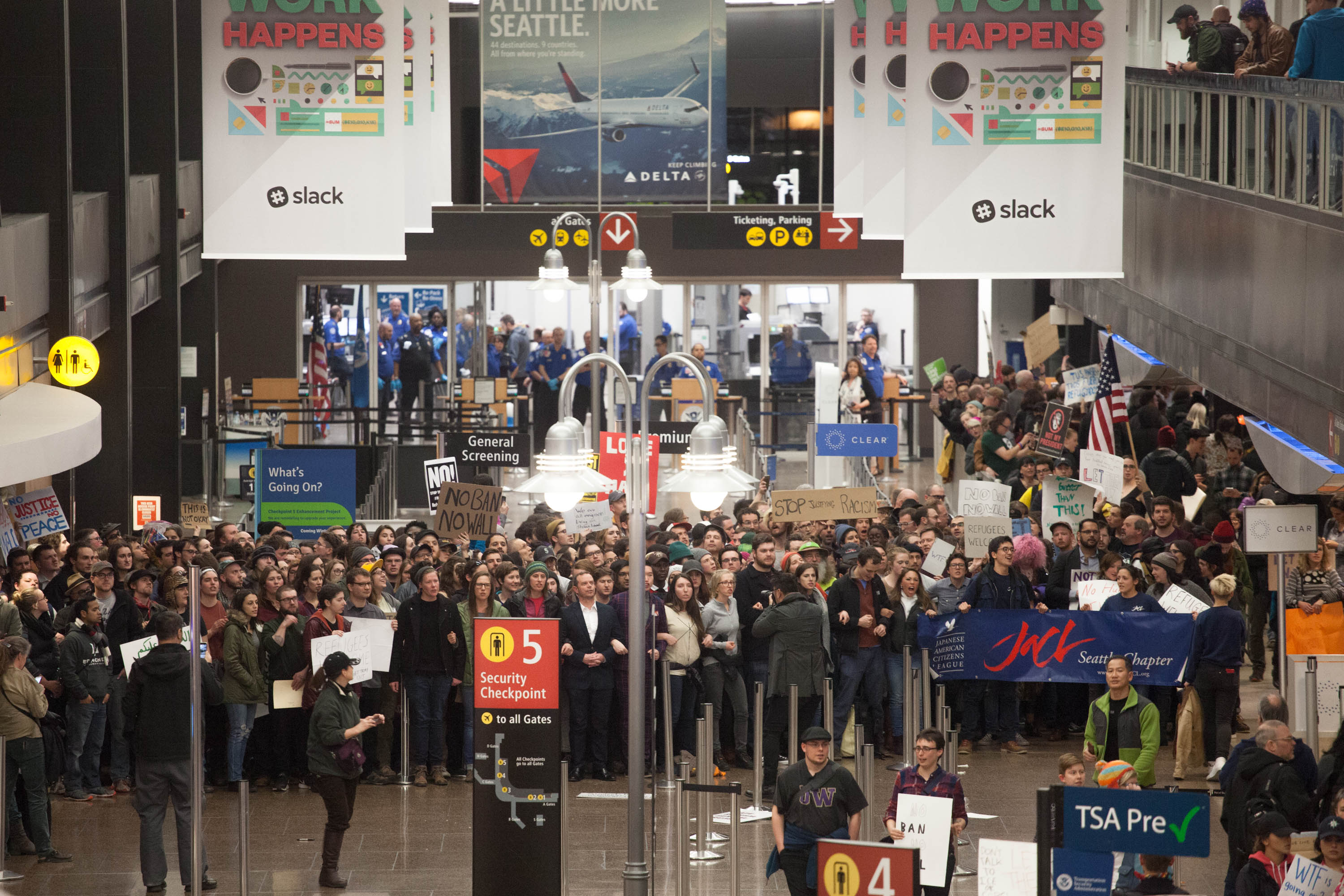 When Courtney Gregoire read about the chaos unfolding in New York’s John F. Kennedy airport Saturday morning, she began to wonder how President Donald Trump’s ban on travelers from seven predominantly Muslim countries would play out in Seattle. Gregoire, an attorney and the daughter of former Washington Gov. Christine Gregoire, is a commissioner of the Port of Seattle, which oversees the Seattle-Tacoma International Airport. So she picked up the phone to ask.

It was the beginning of an astonishing and chaotic day that would see elected officials, civil rights attorneys and thousands of protesters descend upon Sea-Tac in an effort to win the release of passengers caught up in a high-stakes test of Trump's executive powers.

Gregoire learned very little from her phone call. “It was pretty clear to me that communication was not going to be easy,” she said Monday.

Her contact at U.S. Customs and Border Protection wouldn’t tell her anything. “CBP is responsible for who gains access to our country and they do not share that information,” she said of the federal agency.

So while Gregoire knew that flights had come in from Frankfurt and Dubai, major hubs of travel that could very well contain passengers from Iraq, Syria, Libya, Sudan, Somalia, Yemen or Iran, she had no idea how many people had arrived that morning, or if they were being allowed to enter the country. Until they cleared customs, these travelers were not technically in the United States, and therefore not under the port’s jurisdiction.

So Gregoire jumped in her car and headed to the airport, figuring that she might pry some information out of the agency if she could meet someone in person. Along the way, she called former U.S. Attorney Jenny Durkan and asked her to meet at the airport. If she was racing toward direct negotiation with a federal agency, she thought, it would be helpful to have someone who knew the territory.

Kathleen Taylor, executive director of the American Civil Liberties Union of Washington, was in a board meeting around noon when her phone rang. She glanced at it, saw that the call was from Durkan, and let it go to voicemail. She didn’t want to interrupt the meeting.

When the meeting was over, she called Durkan, and heard, with some urgency, that people may be detained in Sea-Tac. Durkan had already made contact with the nonprofit Northwest Immigrant Rights Project (NWIRP), and one of its lawyers was at the airport, although, according to Gregoire, he didn’t know where to meet Gregoire or what he would actually be doing.

Hearing the news, the entire ACLU chapter, already assembled for the board meeting, bolted to action, some driving to the airport, others working from the offices, and all of them joining in a desperate hunt to figure out who was being held and how to stop the feds from deporting them.

From there, word traveled quickly through the halls of power. By early afternoon, U.S. Sens. Patty Murray and Maria Cantwell, Reps. Pramila Jayapal and Suzan Delbene, Gov. Jay Inslee and his lieutenant, Cyrus Habib, King County Executive Dow Constantine, Seattle Mayor Ed Murray and Port of Seattle Commissioner Tom Albro were all scrambling their schedules to meet at the airport.

Gregoire was the first to arrive and she immediately demanded a briefing with CBP. The briefing, held at 1 p.m., was as fruitless as her phone calls. Gregoire doesn't blame the local CBP officers, but rather the nature of the executive order, which was handed down with little warning to the agency. “They were in an exceedingly difficult spot,” she says of the agency staffers.

But as she was meeting with the officers, Gregoire got her first tip: Her husband, Scott Lindsay, a public safety advisor to Mayor Ed Murray, was prowling the baggage claim area, searching for people who might be waiting for passengers who had been detained. It was there that he met a Somali woman and her family, looking confused and worried.

They’d been expecting the arrival of a family member at 10:30 that morning. The flight had clearly landed, but there was no sign of the person they were waiting for.

The family was totally in the dark. CBP had done nothing to seek them out or inform them that their family member had already been returned to Vienna. Had Lindsay not found them, they would not have known until many hours later, when they got a phone call from Europe.

After receiving a text from Lindsay, Gregoire pulled the family into a private conference room to have CBP explain what had happened. “Now that I understand that people are being turned away,” said Gregoire of her thoughts at the time, “it was a difficult message.”

Suspicions were becoming reality. Elected officials began to plan a press conference for later in the afternoon. Meanwhile, ACLU and NWIRP lawyers were drafting habeas corpus complaints to be sent off to federal court, requesting a temporary restraining order.

But the lawyers still didn’t know who they were representing: They had little more information than they'd had at the beginning of the day. That Gregoire had tracked down even one family was by chance.

At around 2:30, rumors began spreading that 13 people were detained, but no one seemed to know where that number came from. In the hours following, that number was revised to 10, then five, then six.

At 3:30 p.m., local officials gave a stirring press conference that was broadcast widely across local TV networks and social media platforms. Gov. Inslee called the order "religious discrimination in its barest and most obvious form."

Even as the press conference was occurring, people were frantically working to gather information. Partway through, Gregoire learned that there were two detainees and that they had already been booked on a 5 p.m. flight back to Dubai. Gregoire snuck off to the side to find Durkan, understanding that there was now a ticking clock.

“What we really need is an order [from a judge] denying removal,” she recalls telling Durkan. “There’s chaos and no clear lines of communication.”

Gregoire and Durkan asked NWIRP and the ACLU if they could expedite their complaint by filing it under John Doe. They did just that, then tracked down U.S. District Court Judge Thomas Zilly and sent off the complaint, signed by many of the elected officials at the airport.

Time was running out. The two detainees had already been put back onto the plane. So Gregoire and NWIRP Executive Director Jorge Baron went to Emirates Airline, demanding that the plane be held while they wait for the judge to weigh in. The airline agreed, at least momentarily.

At the same time, Reps. Jayapal and Delbene and staffers from Gov. Inslee's office were doing their own sleuthing. According to a firsthand account, they demanded a briefing of their own from CBP. When they were told that no one was able come to them, Jayapal strongly suggested going to them.

Security staffers initially denied them access, but Jayapal kept pressing until Sea-Tac staff agreed to escort her, along with Delbene and a slew of staffers, to CBP office.

They cut through baggage processing, took an elevator down to the tarmac and buzzed across the vast expanse of concrete to the CBP offices in a van. Security officials warned them not to be distracted with their phones; runways are busy places.

When Jayapal and Delbene arrived at the CBP offices, no one would come to speak with them. The two members of Congress literally banged on the door until, after about 20 minutes, CBP Seattle Port Director Mark Wilkerson finally came out to talk. They patched in Gov. Inslee and Sen. Murray on a conference call. Inslee in particular was apparently audibly frustrated, as he had been all day.

As that meeting was taking place, Baron and Gregoire got the order from Judge Zilly to stay the deportation of the two detainees, the second such order in the country. The boarding ramp to the Emirates flight was literally pulling away from the plane when Baron confronted airport and CBP staff with the order on his phone.

The airline offloaded the two confused passengers, one from Sudan, the other from Yemen.

While this was playing out, the public was starting to get pictures of what was unfolding at Sea-Tac, care of activists and a handful of journalists who were broadcasting the scene live on Facebook.

Local activist Doug Woos had known that a protest against Trump’s immigration ban was planned for Seattle's Westlake Park on Sunday night, but he'd been restless. So, according to Woos, at around 3 p.m., his friend Joseph Redmon created a Facebook event calling for a protest that night.

"There were immediately between 10 and 100 people [who had expressed interest in the event], and within an hour it was hundreds," Woos says. By the time Woos boarded the light rail in the University District, the roster of attendees was up to 1,000, he says. There were hundreds of protesters on his train, many of them traveling to the airport.

By the time the two detainees were pulled from their flights, they could see the coverage of the protests outside, which were growing louder and larger, according to a statement sent out by ACLU.

But no one was sure what would happen next. According to Taylor with the ACLU, the plan was to send them to the Northwest Detention Center in Tacoma. But Taylor says Baron fought with CBP to prevent that from happening until, eventually, the feds agreed to lay down cots in the airport.

As the night wore on, chaos unfolded outside. Sound Transit briefly halted service to the airport, to great outcry, and more than 30 people were arrested. Gregoire says the conduct of the Port of Seattle police will be reviewed.

Behind shut doors, the scene for the two detainees was quiet, but anxious, says Gregoire: They had no idea what was in store for them.

At 6:30 a.m., the detainees were released, one allowed to reunite with family he was visiting here, the other to travel on to his final destination for a conference on engineering, according to the ACLU.

On the heels of the weekend, officials in the region began doubling down on their opposition to Trump and his executive order. On Monday, Seattle City Councilmember Lorena Gonzalez introduced a resolution declaring Seattle a "welcoming city" to immigrants and refugees.

Gregoire, for her part, still doesn’t know how many travelers were returned to their place of origin. Several news outlets have said there were four, but Gregoire still hasn't been able to confirm that. The whole weekend was a bit of a mess.

"There’s no question," Gregoire says. "It was fast and furious."