Can a civics class make a difference? Justice Sotomayor thinks so 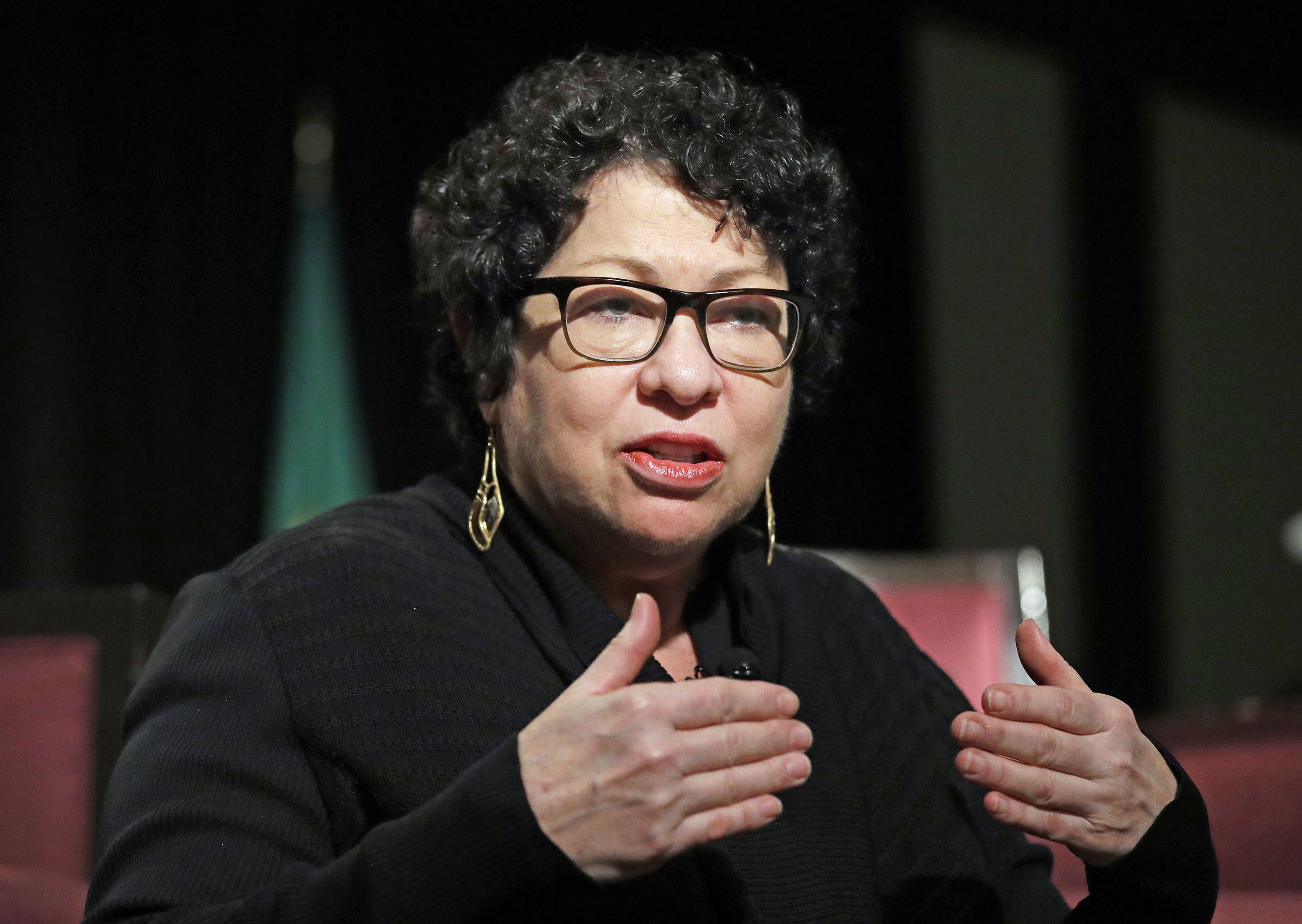 Supreme Court Associate Justice Sonia Sotomayor speaks at a civics event Tuesday, Jan. 23, 2018, in Seattle. The Civic Learning Initiative Summit is part of a statewide effort for students to learn about and engage in government. Credit: Elaine Thompson/AP

As some openly fret about the strength of the nation's democracy, U.S. Supreme Court Justice Sonia Sotomayor swooped into Seattle to talk to students, educators and others about the importance of teaching civics in Washington state's public schools.

Addressing a crowd gathered at the Westin Hotel in downtown Seattle on Tuesday afternoon, Sotomayor said: "No one is born a citizen. You have to be taught what that means."

As Sotomayor moved about the room, she touched people's shoulders, looked others directly in the eye. The crowd seemed mesmerized.

"Let's give kids the opportunity to change their own lives," she said, as many of those listening smiled at her.

Sotomayor was in town to support the Council on Public Legal Education, a nonprofit whose mission is to promote public understanding of the law and civic rights and responsibilities. Sotomayor launched the localized version of the national online iCivics curriculum, a program that was founded in 2009 by former Supreme Court Justice Sandra Day O’Connor. Washington is only the second state in the country to tailor the curriculum on how government works to the local level.

Last year, the Council on Public Legal Education also launched a Civic Learning Initiative, which is sponsored by Washington Supreme Court Justice Mary Fairhurst, Gov. Jay Inslee, and Attorney General Bob Ferguson, among others. The initiative includes a bill currently in the state Legislature that would require high school students to take a stand-alone civics course in order to graduate. The bill would also provide funding for professional development of educators in schools and after-school programs, with a special emphasis on underserved communities, and students who might face certain obstacles, such as English as a second language learners.

The power of civics education to create more informed voters who can distinguish between "fake news" and reliable news is the subject of recent research by a Tufts University team.

"We are, in a way, in a crisis," said Kevin McKay, Sunnyside's superintendent. "If we don't do something then another generation is going to pass by ... without true civics learning."

Frank Hewins, superintendent of the Franklin Pierce School District, said his schools in Pierce County are located in a region known for having relatively low voter turnout so he's requiring students who are eligible to register to vote in order to graduate.

"We're trying to break that cycle," Hewins said, referring to non-voters. Hewins also said the school district is in the midst of brainstorming other ways to civically engage students.

Throughout the discussion, various speakers, including Sotomayor, focused on the political polarization America faces today.

"Knowledge is ubiquitous; critical thinking, though, is not ubiquitous," said Chris Reykdal, Washington Superintendent of Public Instruction, while holding up his iPhone. "Our students rarely have to think critically about the opinions they don't share."

For her part, Sotomayor, the first Latina to serve on the Supreme Court, joked about the differences that exist among the nine Supreme Court justices and how she continues to work with them day in and day out, despite looking at the world differently and rarely voting the same way.

She added, "In the end I have another case tomorrow and maybe they'll see my point tomorrow, so I can't write them off. And that's what we've forgotten."

Her agenda on Tuesday, however, clearly focused on the Supreme Court justices of the future.

In thinking about her legacy, Sotomayor said, she determined the best she could do was “to try to motivate as many kids as I could to want to make a difference."

She added, “For me that’s what civic engagement does, it gives us a better future.”

Milena Haile, a 16-year-old junior at Garfield High School, had demonstrated the workings of Seattle's Youth Traffic Court to Sotomayor earlier in the day. As a judge on the court, Haile helps first-time traffic offenders from the ages of 16 to 18 maintain a clean driving record and avoid paying a fine. If found guilty, teenagers can opt to complete a certain number of community service hours, or write a letter of apology, or an essay.

When asked about learning civics, Haile, mentioning that her parents came from Eritrea, said: "I think it's very necessary. There are so many inequalities in our education system."

"Withholding knowledge is injustice," Haile continued. "Most teenagers in general don't really know how to register to vote and how the justice system works."

Asked about Sotomayor, Haile said, "She's my new role model to be honest."