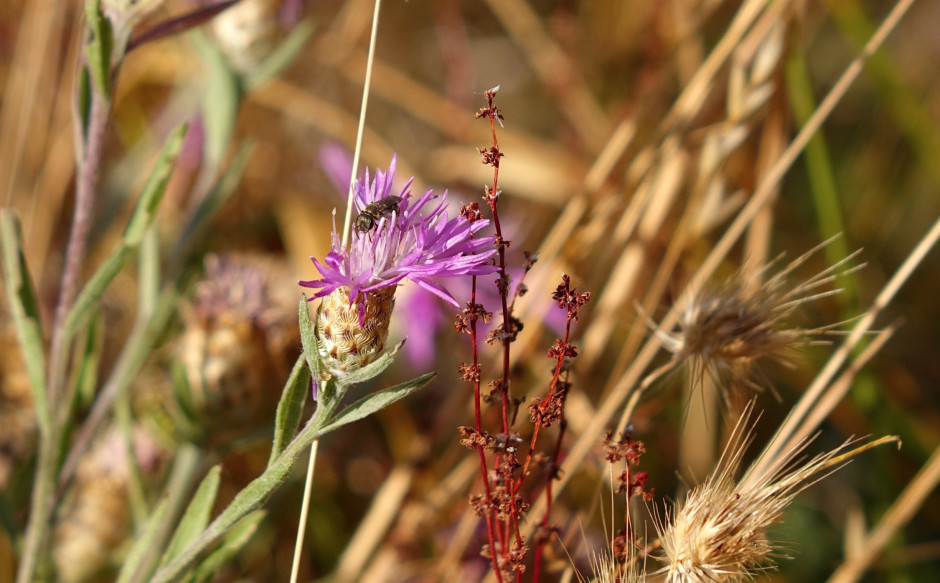 A native bee works a wildflower that emerged after the Douglas Complex Fire of 2013.

About 100 yards down a steep shrubby slope, there’s a low post supporting a green and blue plastic jug. It’s straight out of a psychedelic Tupperware party.

Watkins can’t see the ultraviolet light reflecting off the funnel-shaped mouth of the trap, but bees can.

“The bees really like the UV, so that’s what attracts them,” she says. “We can look inside to see if we got anything.”

She peers through the narrow opening.

“Oh. My. Gosh. There’s so much in here! Baby halictids,” Watkins says.

Dozens of tiny dead sweat bees are trapped inside. She pulls off the lid and shakes the bees into a labeled ziplock. The bees will be taken back to a lab at OSU where they’ll be counted and identified.

The forests around this research site south of Roseburg, Oregon, are slowly coming back from the 50-thousand acre Douglas Complex Fire that burned in 2013. But in the meantime, OSU researcher Sara Galbraith has turned those blackened forests into a massive laboratory.

Her team is collecting bees from a variety of spots. Some burned lightly, some where the trees were reduced to sticks and then salvage logged, and a whole range of fire intensity levels in between.

They’re trying to determine how native bees respond after a fire, in particular how different severity of fires influence populations.

“We’re looking at a few different (habitat) characteristics. And one of the big ones is canopy cover. In the moderate-high and high fire severity categories, there’s pretty low canopy cover. So you get more flowering plants that come in,” Galbraith says.

In these places where more than 50 percent of the canopy burned, it’s also warmer and there’s potentially more nesting habitat. These aren’t hive-dwellers; these bees look for mineral soil to burrow into.

“The story so far has been pretty straightforward,” she says, “in that we’re finding that with increased disturbance at our sites — so increased fire severity — we get higher abundance of bees. And we also get more bee species.”

This is not exactly the most mind-blowing revelation. But in many ways, Jim Rivers of the OSU Forest Animal Ecology Lab says this is exactly what we need.

“We have millions of acres of forests in Oregon that we’re managing.” He says. “And at this point, we don’t have really good information about how those management practices influence bees. If I do ‘X’ how does that influence the number of bees and the species composition?”

These management actions are things like clear-cut and salvage logging, invasive vegetation removal, fire treatments and herbicide use.

“So if we want to understand how pollinators are changing through time, how they’re responding to different management action or climate change or anything else across the time scale, we really need to have a starting point. And we don’t have that right now,” Rivers says.

Bruce Hollen is wildlife biologist with the Bureau of Land Management. He provides policymakers with the information and advice they need to make decisions. He works to make sure the agency doesn’t do anything that causes sensitive species to trend towards extinction.

Hollen cautions that it would be easy to make assumptions about how logging or wildfire affect bees. But it wouldn’t be wise – especially since native bees appear to be in decline across the United States.

“We might get it right for yellow jackets and bald-faced hornets and naturalized European honey bees, but there’s a whole lot out there that we could probably learn from,” Hollen says.

The Douglas Complex Fire scar where the OSU research is happening is on BLM land. Hollen heartily supports the research because right now, he doesn’t have the information he needs.

“The bottom line is we’re fairly ignorant at any real stale scale about how native bee species use forest environments. And how they react to juxtaposition of conditions. And when you couple that with pollinator importance, to me that’s the real cool part,” Hollen says. 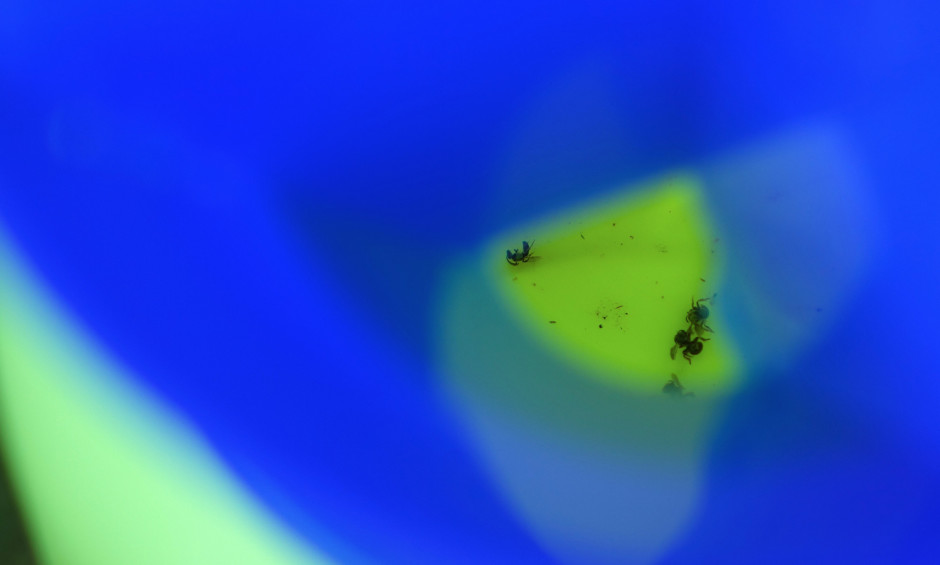 OSU’s Jim Rivers says the native bee research – and the findings starting to emerge after two years of fieldwork — ties in quite well with a larger discussion emerging in forest management.

“So much of the focus in the Pacific Northwest has been on older forest, and particularly the old growth because of concerns or species like spotted owl and marbled murrelets. But some have argued that we have been ignoring the early successional stages of forests,” he says.

Bees could be a big winner if this idea really takes hold.

This would not only be good from a biodiversity standpoint, but it also could have far-reaching benefits for people as well. Bees pollinate about 90 percent of our native plants.

And native bees also have the potential to backfill some agricultural pollination capacity that’s being lost as European honeybees populations crash.

Study lead Sarah Galbraith is beginning to think about this possibility. She thinks there could be a critical link between native bees that live in forests and nearby farmland.