No 'I do' for Sen. Doug Ericksen and Trump's EPA. Yet 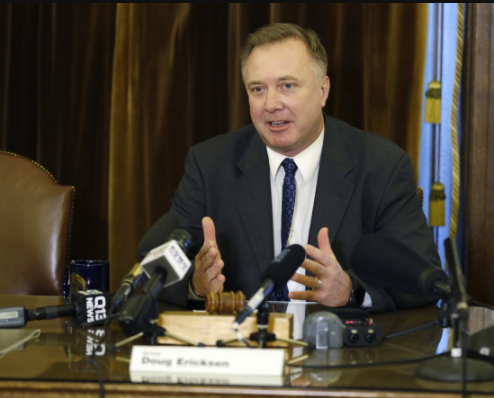 He flirts. The other side flirts back. He’s coy about the whole thing.

Who knows whether state Sen. Doug Ericksen — a GOP leader against Democratic environmental measures, especially those by Gov. Jay Inslee — will eventually take a job with President Donald Trump's EPA? Or whether he was on the brink of taking a job last week as a senior adviser with the U.S. Environmental Protection Agency’s Northwest office?

On Monday, Ericksen denied a Friday news report that he would take that regional job. But he verbally danced around questions on whether he actually discussed such a posting last week with the administration.

Ericksen, vice chair of Trump’s 2016 campaign in Washington state, has been in an off-and-on courtship for at least a year about whether he would become a full-time part of the Trump administration. And he worked for the Trump administration in the EPA's D.C. office early last year, while continuing to serve as a state senator.

Former state Sen. Don Benton, who served with Ericksen in the Legislature and was the chair of Trump’s Washington state campaign, was appointed an EPA senior adviser in Washington, D.C., before being switched over to head of the United States Selective Service. There were reports that the switch happened because he greatly irritated his EPA colleagues; Benton dismissed the reports as "fake news."

On Monday, Ericksen and the EPA's dealings began to look more like a romantic comedy built on top of straight news. While he said he wasn't taking the EPA job that the Bellingham Herald had reported would be in the agency's Seattle office, which oversees the agency's work across the Northwest, he allowed that he had wanted to consult with other — unidentified — people before giving an answer to the Herald. That was about all he would say about that position, although he did admit he had turned down some offers from the administration in the past year.

Ericksen said he wants to keep serving his district — all of Whatcom County except for liberal parts of Bellingham — and plans to run for re-election to the Senate in 2018. But in typical rom-com fashion, he would not rule out taking a future job with the Trump administration.

A factor that has not publicly been discussed is that a high-ranking regional federal government job would pay significantly more than a Washington state senator’s salary of $47,776 a year. But it appears he could easily triple his state pay: An Oregon Public Broadcasting reporter dug out records last year to show that the rate of pay for Ericksen's temporary D.C post was listed at $161,000 per year.

Ericksen, 47, has worked in government analytical, supervisory and legislative positions for most of his adult life. He was a state representative from 1999 to 2011, and has been a state senator since 2011. He has a master's degree in environmental policy from Western Washington State University and is a leader on environmental issues for the party in the Senate. In that, he mirrors Benton. Benton’s sole environmental background, however, came from a highly controversial political appointment as Clark County government’s head of environmental services for almost three years, in spite of a lack of formal qualifications.

If Ericksen ever joins the EPA, he would fit in neatly with Trump and EPA Administrator Scott Pruitt's vision for the agency. He was key to Republicans' blocking the Inslee administration's environmental proposals in the Legislature.

At least for the time being, Ericksen sees a future for himself in the Legislature. But he and the Trump administration are still passing notes in the classroom, even if they’re not ready to become a full-fledged couple.