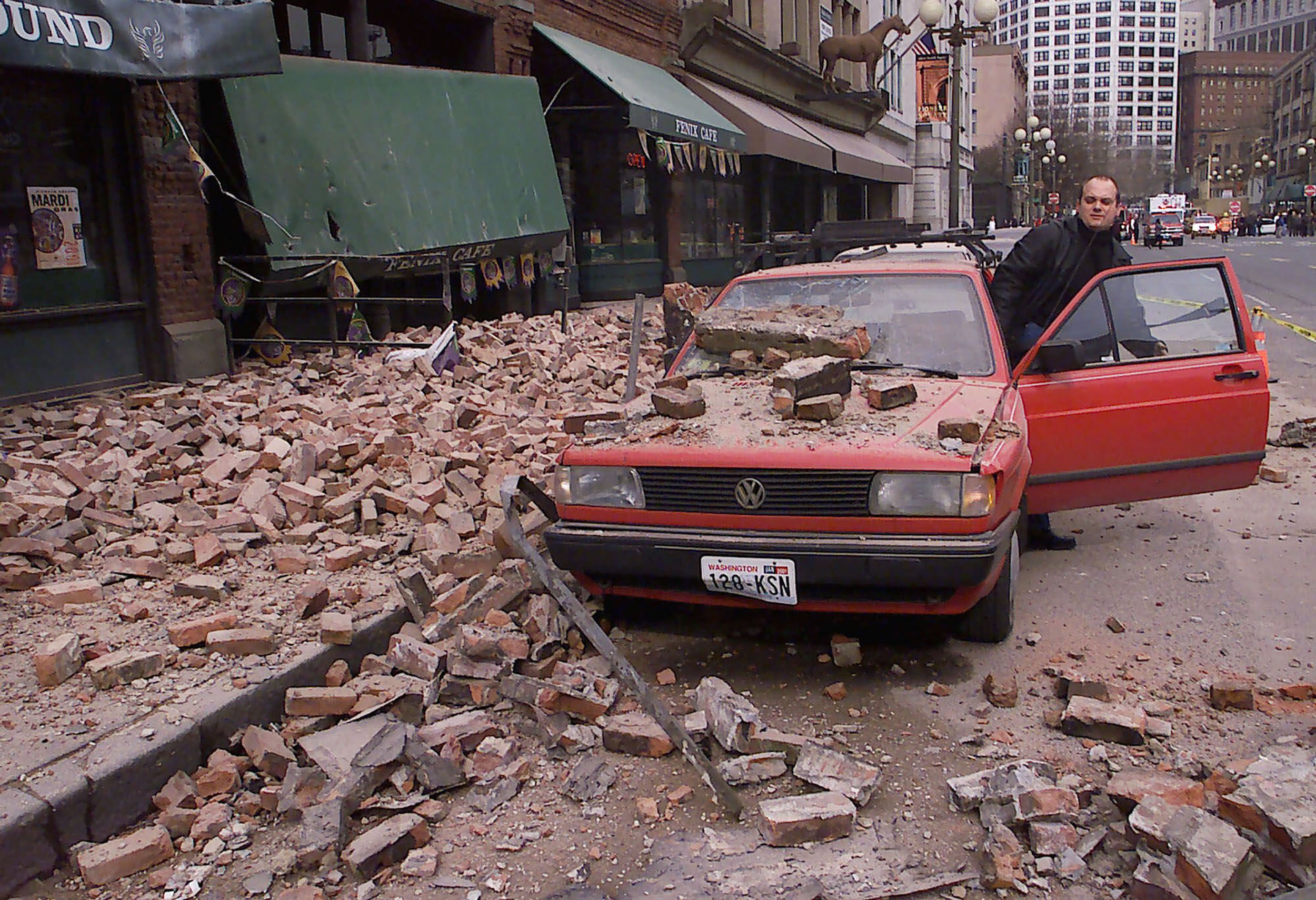 Paul Riek checks to see if his car starts after parts of the top half of a nearby building fell on it, during an earthquake in downtown Seattle, Wednesday, Feb. 28, 2001. Credit: Stevan Morgain/AP

From President Donald Trump’s State of the Union speech to reports on the shortcomings of U.S. bridges, this is a week when critical infrastructure is in the news — and when people and organizations argue for more funding for that critical infrastructure. The term "infrastructure" immediately conjures up images of bridges, roads, dams, ports and airports. But what we don’t have today is a functional earthquake early warning infrastructure or leadership from Washington state elected officials on the subject of seismic public safety.

There are many nations — some of them tiny in comparison to us — that have been fielding earthquake early warning systems. The list includes the likes of Mexico, Korea, Romania, Taiwan and Mongolia. Then there are nations like Japan, which is spending $1 billion to improve its seismic warning system, and China, which is installing a $300 million system that last August gave people in Chengdu 71 seconds of warning before a quake.

Even in pure financial terms, our efforts pale in comparison. The national budget for a West Coast system is $16 million — decimal dust in comparison to the Department of Defense budget.

Washington state government’s financial contribution reflects the priority officials place on seismic public safety, which is zero, nada, nothing. It is time for Washington state to step up to the plate with funding since we are the second-most vulnerable state in the nation after California. California, for its part, has already chipped in $10 million from the state’s coffers, because they value the lives of their citizens.

The technology exists today to implement a warning system. What is lacking is elected officials’ attention to the topic of seismic public safety.

An initial “P Wave” — which we humans can not physically perceive — emanates from an earthquake and will alert an array of seismic instruments, which can, in coordination with others, determine that an earthquake is occurring and send alert messages to both people and machines.

This warning may come as little as four seconds before shaking is felt, or in the case of the long-feared Cascadia Subduction Zone earthquake, we could have up to four minutes of warning, depending on where the rupture occurs.

The benefits of an earthquake early warning system are many. I see the primary benefit of the warning system coming from machine-to-machine communications. With electronic signals being distributed to operating equipment, you have the opportunity to prevent direct or collateral damages. Examples include things such as slowing trains to avoid derailments (in the mega earthquake of 2011, Japan’s system triggered emergency braking on 33 high-speed Shinkansen trains); elevators that open automatically at the next floor with a message, “Earthquake detected, exit the elevator now!”; and fire station doors that open automatically, eliminating their being jammed and keeping trucks from being deployed.

It might also be possible to alert individuals to “drop, cover and hold” where they are, although we humans must become better trained to follow these types of instructions.

As a country and state, we seem incapable of taking proactive steps to prevent or mitigate damages or loss of life before there is a major disaster. It is normal that after every disaster there is a call for what lessons have been learned. In actuality, at least here, the majority of these after-action reviews turn into “lessons observed” with no follow-up actions taken.

It is time for Washington state to step up, as California has, and contribute financially to an earthquake warning system and not depend solely on federal funding that is being piecemealed out as crumbs falling from the federal table. Is there no Washington state legislator in the House or Senate who will lead on the issue of seismic safety?