Why 'X' is now an option for gender on birth certificates 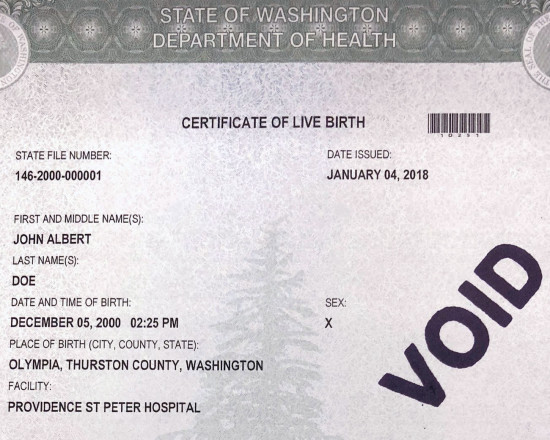 Society and social norms have changed. The way we think about the traditional roles of men and women has changed.

Society and social norms have changed. The way we think about the traditional roles of men and women has changed. Gender identity discussions have changed. In keeping with the changes in society and around gender identity, a new Department of Health rule will go into effect on Jan. 27, allowing individuals to change the sex designation on their birth certificate to reflect their current gender identity.

Washington joins Oregon and California, both states having passed similar laws in 2017 allowing gender-neutral designations on birth certificates. The new rule will provide those born in Washington the option to change their birth certificate to reflect male, female, or the non-binary option of “X.”

This new change could also have a positive effect on one’s health equity. Health equity exists when all people have the opportunity to achieve their full health potential regardless of the color of their skin, their birthplace, their level of education or their gender identity. Having a birth certificate that aligns with the gender of a person’s lived experience benefits those whose identity has changed since their sex was recorded at birth.

When the sex listed on the birth certificate doesn’t match how people present themselves in society, it opens the door for harassment and discrimination. Negative reactions range from denial of employment, education, housing, health care and public benefits, to verbal harassment and even physical violence. Both the 2015 U.S. Transgender Survey Report and Understanding Issues Facing Transgender Americans 2016 document these effects.

In addition to adding the option of X, the rule streamlines the process for adults to make a request. Adults will no longer be required to have medical attestation, but will simply need to submit a signed and notarized request form indicating the new sex they want their birth certificate to reflect. Requiring a notarized signature on applications is the least burdensome method of protecting the subject of record from potential malicious acts of others as well as providing a level of protection from error.

Minors will still be required to have parent or guardian consent and an attestation from a health or mental health provider because changing the sex designation on the birth certificate is a significant decision that minors may not be ready to make on their own. Involving parents or guardians and health providers in the decision helps ensure that the impacts of making the change, both positive and negative, are carefully considered.

The department carefully considered sex designation options beyond male and female, ultimately deciding to go with the single mark of X rather than a word or a blank write-in space to capture this information. The term X as defined in the rule is inclusive of a wide array of non-binary terms used to describe gender.

The birth certificate captures the facts at the time a baby is born, but some of the information recorded can change over the course of a person’s life. The department makes about 50,000 changes to vital records each year, including changes to the child’s name, parents’ names and sex designation on birth certificates. In recent years, we have seen an increase in requests for sex designation changes, growing from more than 100 in 2015 to nearly 300 in 2017.

The new rule is a result of a public rule-making process initiated in August 2017. Through the process, the department heard from more than 1000 Washingtonians, which led to a change in the draft language. As one would expect on a social change issue, we received a wide spectrum of comments with the majority being in favor. However, there was opposition, but we hope that in time, those that opposed the change will come to see the benefits.

The new rule provides an option for those whose gender identity differs from their sex at birth by allowing them to change their birth certificate to reflect who they are today. Giving people this option reduces the risk of discrimination and promotes health equity.