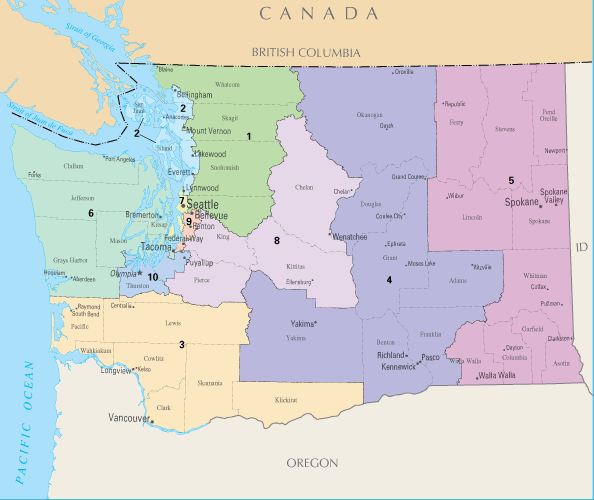 Washington's congressional districts as they've been drawn since 2013.

The recent election has quickly shifted attention to 2018 and the partisan balance in Congress. Washington State’s spotlight has fallen on Congressman Reichert’s seat in the 8th Congressional District. His retirement has put this seat into play. The prospect of the election of a Democrat after a strongly contested race on the Eastside spotlights the changing voter preferences around the Greater Seattle area.

Looming over the 8th District race is the question of what the shape of the boundaries will look like in 2021 after redistricting with the 2020 census. Will the 8th District lose the farmlands of Kittitas County and gain the University District in Seattle? It is entirely possible.

The 2020 census will also have a dramatic impact on the composition of the Washington State Legislature and Washington’s congressional delegation.

Population growth in Washington State has not been evenly distributed. The booming Puget Sound region has seen the bulk of the state’s growth while many rural areas have remained stagnant.

The booming economy of the Puget Sound area is attracting major growth in population while most rural areas are aging, have relatively fewer jobs, and corresponding population stagnation. The unemployment rates are also higher in rural areas, creating an out-migration.

There is little reason to predict a change in these population trends before the next census. The intersection of population trends and the mandate of "one man one vote” redistricting in 2021 will create a significant shift in representation.

A recent report from the State Office of Financial Management provides population estimates that give a preview of the future. Washington State had about 6.8 million residents in the 2010 census when the Congressional districts and the current state legislative districts were created. In April 2017, the State Office of Financial Management estimated our population has increased to 7.3 million and another estimate projects the state will have 7.633 million residents in 2020.

The 585,760 people added between 2010 and 2017 are concentrated in a handful of counties, and the Puget Sound region (Snohomish, King and Pierce counties) comprised about two thirds of this growth. Seattle alone is estimated to have grown by 105,040 between 2010 and 2017. In Seattle, there are more apartment units under construction in 2017 and 2018 than the entire population of Garfield County (2,200 people). Indeed, Seattle is estimated to have grown more than the combined population of 30 of the 39 Washington counties.

Much of the remaining growth is attributable to Clark, Spokane and Thurston Counties. In short, nearly all of Washington’s growth occurred in Western Washington or Spokane.

The consequences on redistricting could be dramatic. If the State has around 7.8 million people in 2020 and we retain ten Congressional Districts, the 4th District in Central Washington from Yakima to the Okanogan and 5th District along the Idaho border will be underpopulated.  The 5th District will have to expand west to take necessary population from the 4th District. The resulting domino effect will push the neighboring 4th District west, and thus the 8th District west over the Cascades.

This would lead to current Congressman Reichert's 8th District becoming a swing district — and probably Democratic.

The impact on the legislature would be more pronounced as the districts shift to urban centers that have experienced the most rapid growth. Seattle may well pick up another legislative district wholly within city boundaries. If this happens, the 2022 Legislature can be expected to have a strong focus on suburban and city issues. The shift again favors the Democrats.

Political analyst Ben Anderstone points out an additional implication of the population growth. He points out the districts around Seattle may need to be contracted because they are overpopulated which could kick incumbents out of their districts. Expanded rural districts might also see incumbents combined into the same district.

Washington also may be a ground zero for concerns about the quality of the census and who is counted. A quality census needs to be well-funded and not have impediments that exclude segments of the population to gain partisan advantage.

The Washington Post has reported that Congress is starving the Census Bureau of funds, and the probable appointee to head it is a Texas professor who wrote the book, “Redistricting and Representation: Why Competitive Elections Are Bad for America.” The New York Times also reported that Census experts and public officials are concerned the 2020 census is imperiled with worrisome implications, as it will be the first conducted by email. And the President has suggested adding a question on citizenship or immigration status.

Any sort of attempt to exclude immigrants would impact suburban cities and selected rural areas (including the Yakima Valley). It will be up to city and county governments in Washington state to realize the importance of the census and the impact on representation and revenue flows.

The census is only two years away and the results will impact not just the political makeup of the legislature and Congressional delegation, but also the distribution of federal and state revenue based on population and need.

Our democracy is based on representative government and the makeup of the government is based on the Census. Washington state and Seattle should begin preparing to ensure everyone is counted.