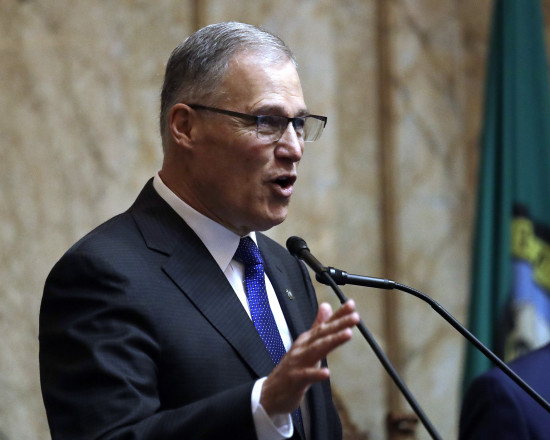 Gov. Jay Inslee speaks during his annual state of the state address before a joint legislative session on Jan. 9, 2018, in Olympia. (AP Photo/Elaine Thompson)

Washington lawmakers are in for a messy 60-day session with no clear solution on how to come up with the final $1 billion needed to meet a state Supreme Court order on funding K-12 education by this year's deadline.

Democrats don't have a plan and Republicans aren't interested in coming up with the money this year.

Democratic Gov. Jay Inslee offered an idea Tuesday during his State of the State address: A new $20-per-ton tax on carbon emissions. But he will need support from all 75 Democratic lawmakers in Olympia to pass it — something that isn’t currently a guarantee.

If Inslee gets his way, it could also mean a potential end to the five years of partisan deadlock over the Supreme Court’s 2012 ruling that the state isn’t meeting its constitutional requirement to fund basic K-12 education, known as the McCleary decision. In November, the Supreme Court decided the state government is one year behind on meeting its June 30 deadline to comply. Consequently, roughly $1 billion from the 2018 session must go to funding McCleary.

In his State of the State speech, Inslee unveiled his plan to fund education: a higher tax on carbon emissions starting July 1, 2019. It would raise $1.5 billion over the first two years. It is expected to increase gasoline prices by 4-9 percent in 2020, within the normal fluctuation of gas prices due to several ongoing economic factors, according to Inslee’s staff.

Under Inslee’s plan, the $1 billion needed to meet the McCleary deadline would come from the state reserves this year. Those reserves would be replenished in subsequent years with the first $1 billion to $1.5 billion raised by the carbon tax.

In the years following, 50 percent of the carbon tax revenue would go to programs to reduce greenhouse gas emissions, 35 percent would be used for flood management, storm water measures, farm irrigation, culvert replacement and forest fire prevention, and 15 percent would go to low-income families to help cut energy costs.

The ultimate goal of Inslee’s plan is to shrink Washington’s carbon emissions to 20 percent of the state’s 1990 levels by 2050 — a much more aggressive goal than what is currently in play.

"While this session is short, our legacy on climate change must be long and lasting," Inslee said Tuesday. "We have just 59 days to do our part to save our children from an endless cycle of crop-killing droughts one year and rivers spilling their banks the next; to save salmon from dying in ever-warming rivers and our forests from being reduced to plumes of ash. We have allowed the unfettered release of carbon pollution into our air."

But House Democrats have been cool to lukewarm about a carbon tax in past years.

The House Democratic caucus has never been able to tally the 50 supporters needed to take such a tax to a floor vote, usually scraping up support in the upper 40s.  With Democrats holding edges of 50-48 in the House and 25-24 in the Senate, a single Democrat crossing the aisle could kill the carbon tax proposal.

“I’m glad we’re in the majority, but I’m a little worried about me,” joked Sen. Steve Hobbs, D-Lake Stevens, a moderate who sometimes crosses the aisle.

Inslee has the only definite plan in Olympia to deal with the $1 billion shortfall. Senate and House Democratic leaders said they have not settled on a way to raise the money. Sen. Christine Rolfes, chair of the Senate Ways & Means Committee, said Democrats might not decide on a plan until early February, but everything is on the table.

If Democrats cannot find the votes for a carbon tax, a capital gains tax could be an alternative. But that's also opposed by Republicans.

The GOP has been steadily murmuring that Democrats are chomping at the bit to unleash a capital gains tax. So far, Democrats have not made a public peep about such a measure for the 2018 session. This is despite proposing it annually  — and unsuccessfully — for the past several years.

Meanwhile, House and Senate Republicans are sticking to their “no new taxes” mantra. They argue the Legislature does not need to worry about raising most of the $1 billion shortfall this session. Instead, they say a one-year delay is meaningless in the grand scheme of things, and that the Supreme Court should not tell the Legislature how to appropriate money.

On Tuesday, Republican legislative leaders did not want to dip into any reserves to tackle the $1 billion McCleary shortfall.

“It’s premature to lead with a budget that relies on the rainy-day fund,” Rep. David Taylor, R-Moxee, said.

Republicans painted a picture of a governor whose endgame is only to collect tax money.

“This is about new and higher taxes. It is not about fixing the problem,” Senate Minority Leader Mark Schoesler, R-Ritzville, said.

Schoesler and other Republicans portrayed Inslee and Democrats as trying a “bait and switch” on the carbon tax — ballyhooing the tax’s goals to pass it this year and then unfairly using it for other purposes in future years.

“Inslee has an almost pathological need to pick winners and losers. … The carbon tax is another example of this,” Rep. Drew Stokesbary, R-Auburn, said.