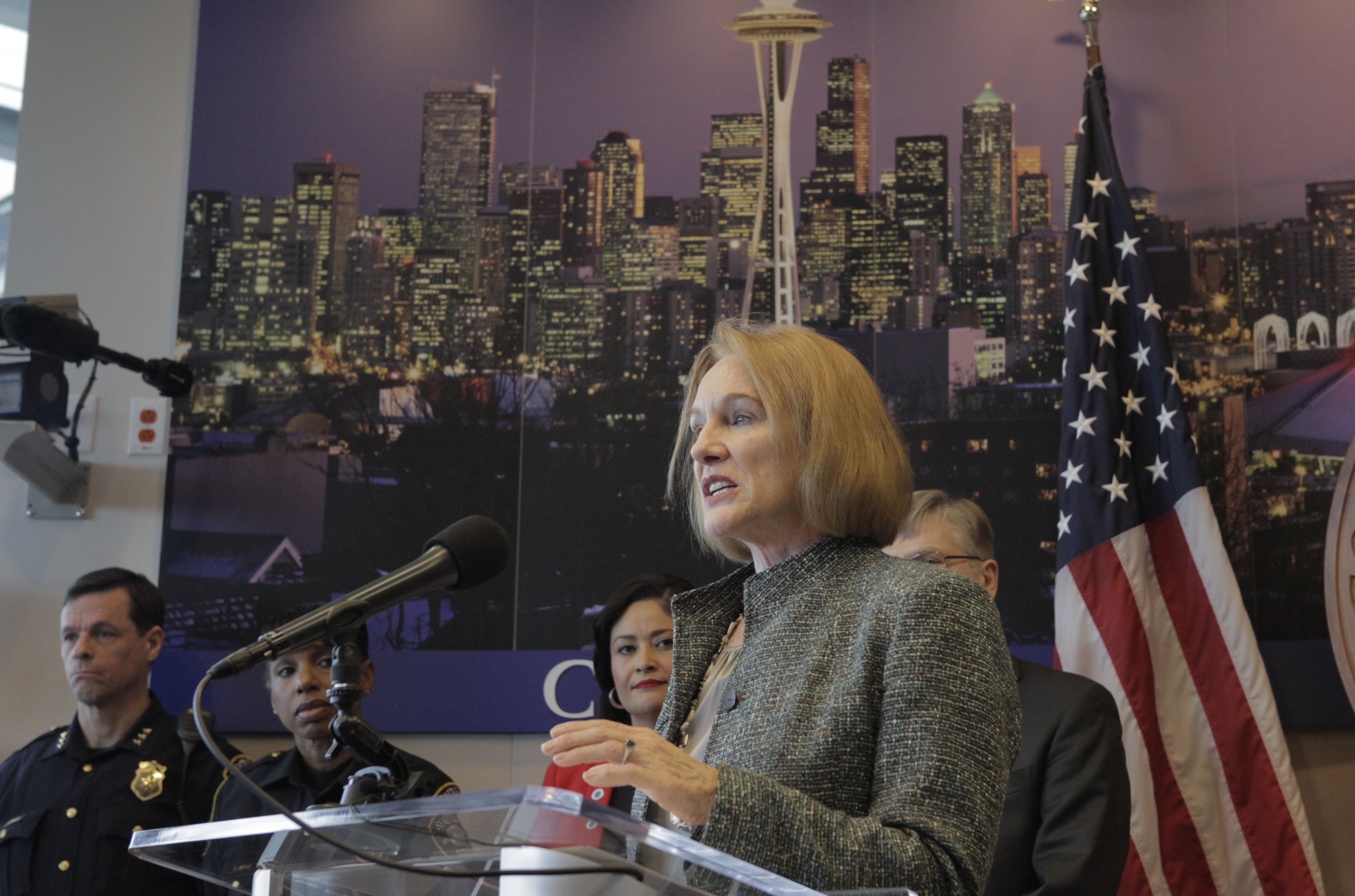 They knew this day would come. But the relative silence from Attorney General Jeff Sessions on legal marijuana over the last year had perhaps given state and local officials and proponents of the legal movement some hope that the drug-hawk AG had bigger fish to fry.

Any optimism was dashed Thursday as the Associated Press reported Sessions intended to allow federal prosecutors in states where marijuana is legal to decide how aggressively to prosecute marijuana-related cases.

Now, local and state officials are condemning his decision while largely taking a wait-and-see attitude about any next steps. They aren't ruling out legal action.

“We may have more to say in the coming days,” Washington state Attorney General Bob Ferguson told reporters in Olympia, adding that Sessions’ decision was not a shock given the attorney general’s vocal opposition to marijuana. Ferguson also said  Session’s order could have gone much further than it did.

Speaking at a late Thursday morning press conference, Seattle Mayor Jenny Durkan called the decision “shameful.” She drew a direct correlation between focus on marijuana enforcement and tackling the opioid crisis, which killed over 200 people in King County in 2017. “Spending one dollar, one minute on dismantling a system that is actually working and diverting resources from a crisis that is killing Americans, Seattleites and Washingtonians is wrong,” she said.

While Western Washington is unlikely to see a change in marijuana enforcement in the coming weeks, banking is an immediate concern, as much of banking falls under federal purview. From the start, the ability of pot shops to operate as normal businesses — depositing money with their banks — has been a potential weak link for the entire legal-marijuana industry.

Since voters approved it in 2012, Washington’s legal marijuana gamble has largely hung on the tenuous hold of the so-called Cole Memo, a non-binding proclamation from the Obama administration that federal officials would prioritize cross-state trafficking and underage use of marijuana, de-prioritizing crackdowns on legal dispensaries or users.

Sessions, however, has long cast marijuana as a dangerous drug and championed deterrence as a means to stem its use. In Thursday’s statement from Sessions, he said of the memo, “Given the Department’s well-established general principles, previous nationwide guidance specific to marijuana enforcement is unnecessary and is rescinded, effective immediately.”

The original Cole Memo from then-Attorney General Eric Holder was a major win for Washington and Colorado, in particular, the two states to first approve and implement legal weed. Neither state knew how the federal government would react when recreational pot was first legalized.

Since Washington and Colorado first broke the ice, Oregon, Nevada, California and Alaska have gone on to allow legal sale, while Maine, Massachusetts and Washington, D.C. have legalized its use, but not sale.

In the years since its legalization, the industry has blossomed into one of the fastest growing business sectors in the country. Marijuana sales are expected to approach $10 billion in 2017 nationally, a number that would almost certainly balloon with the recent legalization in California. In Washington state in 2017, sales are expected to reach $1 billion, with a close to $300 million tax windfall.

Washington now suddenly finds itself back in that legal conflict between state and federal laws as it did immediately after legalization. “That constitutional conflict is once again squarely raised,” said City Attorney Pete Holmes.

Sessions' new directive does not instruct federal law enforcement agencies to carry out specific enforcement, but simply allows federal prosecutors to decide how to proceed. That puts added importance on Trump administration appointments to federal offices.

In Western Washington, Annette Hayes is still the acting U.S. Attorney. An Obama nominee, she was never confirmed by Congress, but instead appointed by federal judges to fill the vacancy left by the departure of now-Mayor Durkan. Her position means Western Washington and the Seattle area are unlikely to see any immediate or significant change to enforcing marijuana policy. The Trump administration may nominate someone to replace her any time.

Durkan said she’s reached out to Hayes, but the two have not spoken. A spokesperson for Hayes’ office issued a statement emphasizing that Sessions was leaving decisions about enforcement steps to the regional offices.

“Today the Attorney General reiterated his confidence in the basic principles that guide the discretion of all U.S. Attorneys around the country,” Hayes said in the statement.

She added, “Those principles have always been at the core of what the United States Attorney's Office for Western Washington has done — across all threats to public safety, including those relating to marijuana. As a result, we have investigated and prosecuted over many years cases involving organized crime, violent and gun threats, and financial crimes related to marijuana. We will continue to do so to ensure — consistent with the most recent guidance from the Department — that our enforcement efforts with our federal, state, local and tribal partners focus on those who pose the greatest safety risk to the people and communities we serve.”

In Eastern Washington, Joseph Harrington is the acting U.S. Attorney until the Trump administration sends a nominee to replace him to Congress.

Regardless of how the two offices proceed in Washington, Durkan repeated a statement she’d made earlier that the feds are not going to be able to “put the genie back in the bottle” when it comes to marijuana. Her point was that, given the resources of the Justice Department and other issues it must address, enforcement against the more than 50 legal dispensaries in Seattle — not to mention the hundreds across the state — would be impossible.

Like the city officials, state and legislative leaders expressed anger at what they perceived as another attack by the Trump Administration on West Coast states. But officials were cautious to not yet say yet how they would respond.

“It leaves it wide open: What exactly does this mean?” state AG Ferguson said. “There are more unanswered questions here than questions answered by [Attorney General Sessions] today.”

Gov. Jay Inslee also told reporters: “We should, in my book, not press the panic button already on either individual lives or your businesses — that we should continue down expressing the will of Washington voters in this regard. So, at this moment I can’t give any legal advice to any Washingtonian.”

Inslee criticized the Trump administration directly by saying Sessions' “unfortunate” decision was an attempt to “scramble away from the chaos of the last few days” with a “distraction.”

“The White House is in chaos and you decide to attack the West Coast on two fundamental issues,” Inslee said, pointing to the marijuana decision and the Trump administration's move to allow offshore oil drilling, also announced Thursday.

Ian Eisenberg, who owns Uncle Ike's and is one of the highest profile marijuana business owners in the state, said he would continue to do business normally. But he said he did have concerns about how his bank, Salal Credit Union, would react to the news. “If we lost banking in this state and everything went back to cash, I don’t know what we’d do,” he said. “We’d have to find a place to safely store cash. . . . Our cost structure would go through the roof, having to have safes and guards and all that.”

In a statement, Salal Credit Union President & CEO Russ Rosendal said, “As always, the needs of our members are of the utmost importance to Salal, as well as the safety and soundness of the credit union. We will be working closely with our state and federal regulators to determine impacts, if any, to banking the cannabis industry by this recent news. Until then we continue to serve our members’ banking needs.”

Durkan acknowledged, “Banking is going to be one of the toughest things because that relies so much on federal regulation — and the attorney general does have the authority to guide banking nationally.”

While Washington may have some strength in numbers when it comes to legal marijuana, which is spread across the state, Seattle and King County are out on their own when it comes to proposed supervised drug consumption sites. Lisa Daugaard, director of the Public Defenders Association, said Thursday that those sites rely on the same basic legal philosophy as legalizing pot, in that their success will depend on agencies choosing not to enforce laws against heroin or cocaine use.

Speaking about consumption sites, Durkan said that the repeal of the Cole Memo “indicated more clearly that we may have some pushback from federal officials.”