At Microsoft, 'city' is in — even in the suburbs 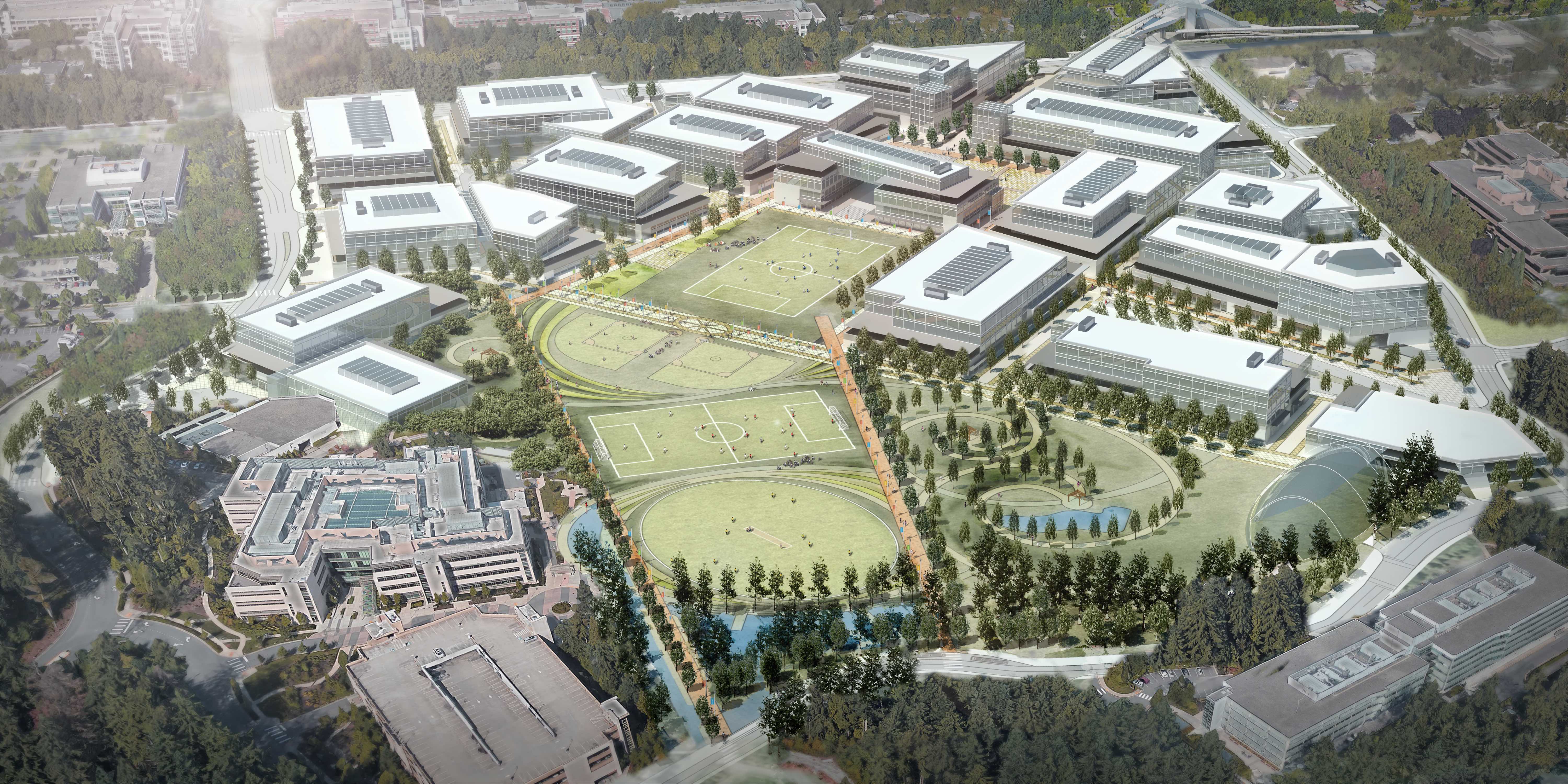 An aerial view of what the Microsoft campus expansion would look like.

No matter how much you grieve for pre-Amazon Seattle, that company has proved that urban centers are not just banks for corporate square footage. They’re places to call home.

At the symbolic center of our urban campus are Amazon’s globes — clustered like a space station along Lenora Street, surrounded by towering slabs of office space. Mixed-use apartment towers built by various developers fill out the zoning envelope as they radiate like waves into downtown Seattle and die into the shoreline of Lake Union. While some of the historic fabric is preserved, the tech center and city are almost indistinguishable.

And even as campus construction continues in Seattle, Amazon’s grand experiment in building a new workforce has clearly paid off. The burgeoning tech giant reportedly owns or leases about 20 percent of the office space in the city — and the wave of new apartment towers is still cresting. Last year, Seattle was branded a company town. Almost on cue, Amazon invited other cities to send resumes for a second headquarters. Now our city can look forward to breathing again, with a mixture of relief and hurt feelings.

The timing was perfect for a love letter from Microsoft, and it came just in time for the holidays. The company announced a plan to grow in place in Redmond, which will be a proud future terminus of a regional mass transit system. With its 1980s roots and ongoing campus there, Microsoft revealed expansion plans timed to the completion of Sound Transit’s Link light rail expansion in 2023.

Just when we thought we’d never see the suburban campus come back, it now looks like the wave of the future.

The original workforce — the one that moved into window suites in low-rise, open-hinged buildings on the sprawling Microsoft campus — is moving on. Thanks partly to the success of urban Amazonia, corporate leaders know the millennials that are desperately needed to replace them are much less likely to want that private suite or the suburban life that goes along with it.

But they might choose a suburban job — if they can live closer to the city. Now they’ll have a choice. Some could live literally next door to the Microsoft campus in the thousands of new apartments planned nearby in Redmond. But if they’d rather live in Seattle or near any one of the other stations built out along the future light rail system, they will have that option too.

The tech giant has been cagey about real estate development, determined to make it a good investment — and get it right before expanding. The company began laying the groundwork for an SR 520 pedestrian and bicycle bridge in a 2005 agreement with the City of Redmond. At the time, Microsoft committed to paying a share of it, despite Sound Transit still having at least a decade of planning to do.

The importance of this bridge cannot be overstated — it not only connects two sides of the Microsoft campus, but it will also consolidate Microsoft’s connection with light rail. The new Redmond Technology Center station, which broke ground this month, is wedged against SR 520, and the buildable, older part of the campus is on the opposite side. The bridge will become part of the new commuting experience and a gateway to the campus.

You’ve got to give it to Microsoft. Even at that time, the company saw right over the freeway traffic into the Millennial mind. Car commuting — with eyes locked on the road and hands on the wheel — is not a good look.

As a direct result of light rail, cars will be much less essential, and the ones that are driven to campus will be out of sight. The announced plan includes thousands of underground parking spaces under the new buildings. Redmond Technology Center station itself will have new structured parking. The planned pedestrian and bicycle bridge is slated to be completed in 2020, three years before light rail.

Over time, light rail should be faster. Trains will come as frequently as 8 minutes during peak travel hours at Redmond stations. Ride times are predicted to be as little as 30 minutes to International Station in Seattle, and 40 minutes to the University of Washington Station. Some predict that as the Blue Line begins, drive times and bus transit times between the same points will be faster than light rail during much of the day. However, as roads get even more congested, light rail will gain advantage and ridership will increase — to nearly 50,000 trips per day by 2030. That’s about the current population of the Microsoft campus.

Microsoft’s announced plan for the campus would add space for about 8,000 workers. Conveniently, the company has found a way to make a new campus population transformative. It will become more like a city, and the way to get more like a city is to get people out in the open. The practical application of this formula is to build a walkable campus where Microsofties can wander and meet most of their workday needs, then go home to Seattle and the other cities of the region if they like.

By 2023, commuters will cross the SR 520 pedestrian and bicycle bridge over the highway to a very dense and rich urban place — a corporate campus-as-city, with a playfield. The playfield is an unfair advantage that a suburban tech campus has over its urban counterparts, because land is cheaper. The open space will add to the view of new ranks of tech workers, who will look out from more and taller new buildings. Height limits have been lifted on part of the campus.

Based on agreements with the city of Redmond going back to 2005, Microsoft will clear 12 of its buildings and replace them with 18. A video released by the company shows interiors that look more like see-through cities, with large windows, more views, open floor space and more places for employees to settle, meet or work.

Doug Demers has led design teams making and remaking tech centers, and his firm is one of many likely to compete for design contracts at Microsoft in the coming years. “Everything is mixed use these days. Otherwise it’s not interesting.” And, he could have added, it’s not urban.

Architects like Demers are becoming adept at retooling existing buildings on tech campuses into more urban places. In addition to outdoor plazas and walkways, that means greater variety in retail spaces at the ground floor level, and more places to explore.

In other words, more of the city is coming to the campus, even if the public is not invited. Health conscious millennials can have it all: a hands-free commute, cool workplace, curated retail and the potential for a soccer break. With the right fuel — high protein jobs, transit energy boosters and healthy planning — the suburb can grow to new heights and help to feed the economy of the region. Microsoft and Redmond can take the pressure off Seattle and keep the regional economy humming along.

Seattle can recover its soul, maybe.