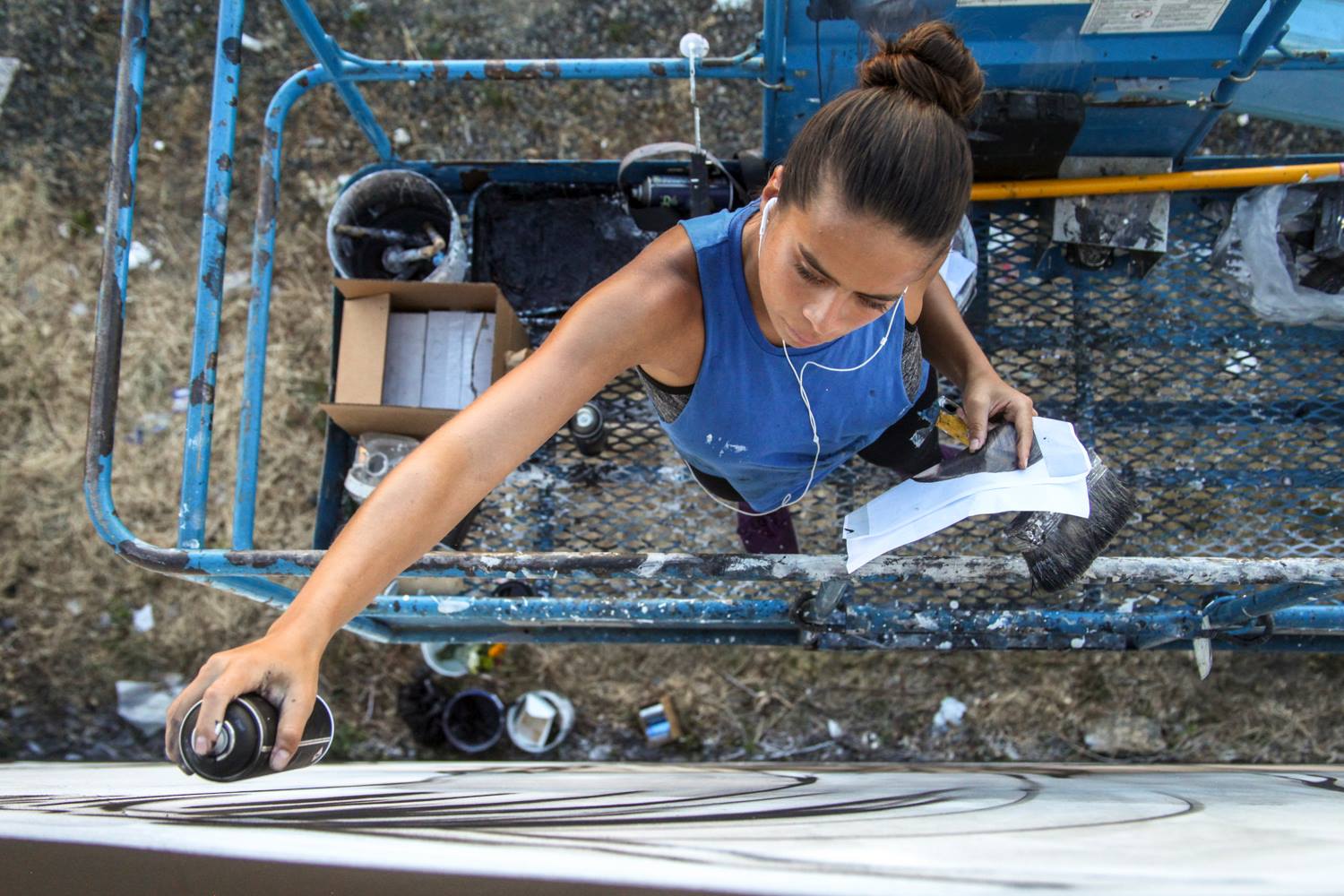 Paola Delfin at work on the SODO Track Mural Project in Seattle, WA. Produced by 4 Culture and curated by Gage Hamilton.

The King County Council wants more control over 4Culture, the arts and cultural agency. A proposed ordinance introduced Monday would change how the 15-member 4Culture board is chosen. It would also require Council approval of the agency’s annual budget, which is approximately $10 million a year. The Council would also have the authority to hire and fire 4Culture’s executive director.

Jim Kelly, 4Culture’s executive director, is retiring after 19 years and the agency is currently seeking his replacement.

Opponents of the proposal say giving the Council final approval of the budget could result in grant funds being dictated by councilmembers, rather than through a peer-panel review that is already in place. They also worry that allowing the Council to hire and fire the executive director would give the Council authority over 4Culture that it does not have over similar agencies.

“They want to be a layer of oversight that’s not common for agencies like ourselves,” DePaolo said.

Councilmember Dave Upthegrove, the primary sponsor of the ordinance, argues the proposal will modestly impact 4Culture. Such fiscal oversight is needed, he notes, because the organization is funded entirely with public money.

“It’s not about fixing a problem, it’s to ensure a direct link of accountability to the public through the Council,” Upthegrove said in an interview on Monday. “The funding levels aren’t changing at all. It’s about a couple of modest measures at the high end that I don’t think are going to harm, but actually help, arts funding,” he added.

To bridge that gap, in 2012, $25 million in leftover lodging tax revenue was directed to the agency after Kingdome bonds were paid off early. That one-time infusion, combined with money from a former endowment, are what currently funds 4Culture’s budget. That funding is expected to continue until 2021, when some of the lodging tax revenue will also once again fund the agency, Kelly said.

But it’s that lodging tax revenue — an estimated $13 million a year — that Kelly says is Upthegrove’s reason for increasing the County’s oversight of 4Culture.

“It’s the same amount of money the agency received in 2012 and nobody proposed an ordinance in 2012,” Kelly said.

Upthegrove, nonetheless, argues this new revenue stream is forecasted to grow quickly in the coming years. With Kelly’s impending retirement, Upthegrove says it is a good time to make structural changes to the organization.

If it passes, the ordinance will give the Council final approval over the agency’s budget. The Council would not be allowed to amend the proposed budget or influence grant decisions.

“We’re not suggesting the King County Council get involved in choosing projects,” Upthegrove said. “We would just like to see the overall plan and vote on it.”

But 4Culture says budget approval could delay the distribution of grant funds. Currently, the 4Culture board approves the budget with funds appropriated by the Council.

“Is there a particular problem?” Kelly asked, questioning the motives behind the proposed ordinance. “Why, all of a sudden, is there great interest in the accountability of our budget?”

He said the proposal was less about accountability and more about control.

The ordinance also proposes changing the process of appointing board members. Currently, future board members are nominated by 4Culture’s board, which is chosen by the county executive and confirmed by the Council. According to DePaolo, a nominating committee works with the 4Culture board to send the county executive at least two nominees for each open seat. DePaolo said the agency strives for diversity, both culturally and in terms of where board members reside.

The proposed ordinance would instead give each councilmember the authority to nominate a board member from their district, with the remaining six members nominated by the county executive. All would be confirmed by the entire Council.

Councilmember Claudia Balducci doesn’t support a measure that would control 4Culture's grant process. She wants the ordinance to strike a balance of allowing for accountability while preserving 4Culture's independence.

Balducci sits on 4Culture’s board as an ex-officio board member — meaning she is invited to participate in board meetings but cannot vote.

“We should maintain the independence of the agency, they do a very good job,” Balducci said. “If we don’t maintain independence, we will end up politicizing the grant-making process.”

Meanwhile, members of the local arts community are pushing back on the proposal, campaigning on social media to email the Council. “Allowing politicians to regulate the arts is like asking farmers to become surgeons,” wrote Gary Dwyer on an Advocate4Culture website.

“I strongly object to the proposed politicization of the funding process and believe that it will negatively impact the fair and equitable citizen-reviewed funding process for which 4Culture has been a model,” wrote Ann Racki on the same website. Racki, according to her post, is president of Philharmonia Northwest.

“4culture is not broken. It feels like a grab. What is the need for this grab, for this oversight?” argued Michelle de la Vega in an interview. De la Vega, a multi-disciplinary artist who lives in White Center, has received 4Culture funding and has been a speaker for some of its events.

Political interests should not control arts funding, says de la Vega who is meeting with other artists to strategize about possible countermeasures to the ordinance.

Upthegrove said a public hearing on his proposal will probably be held mid-to late February.