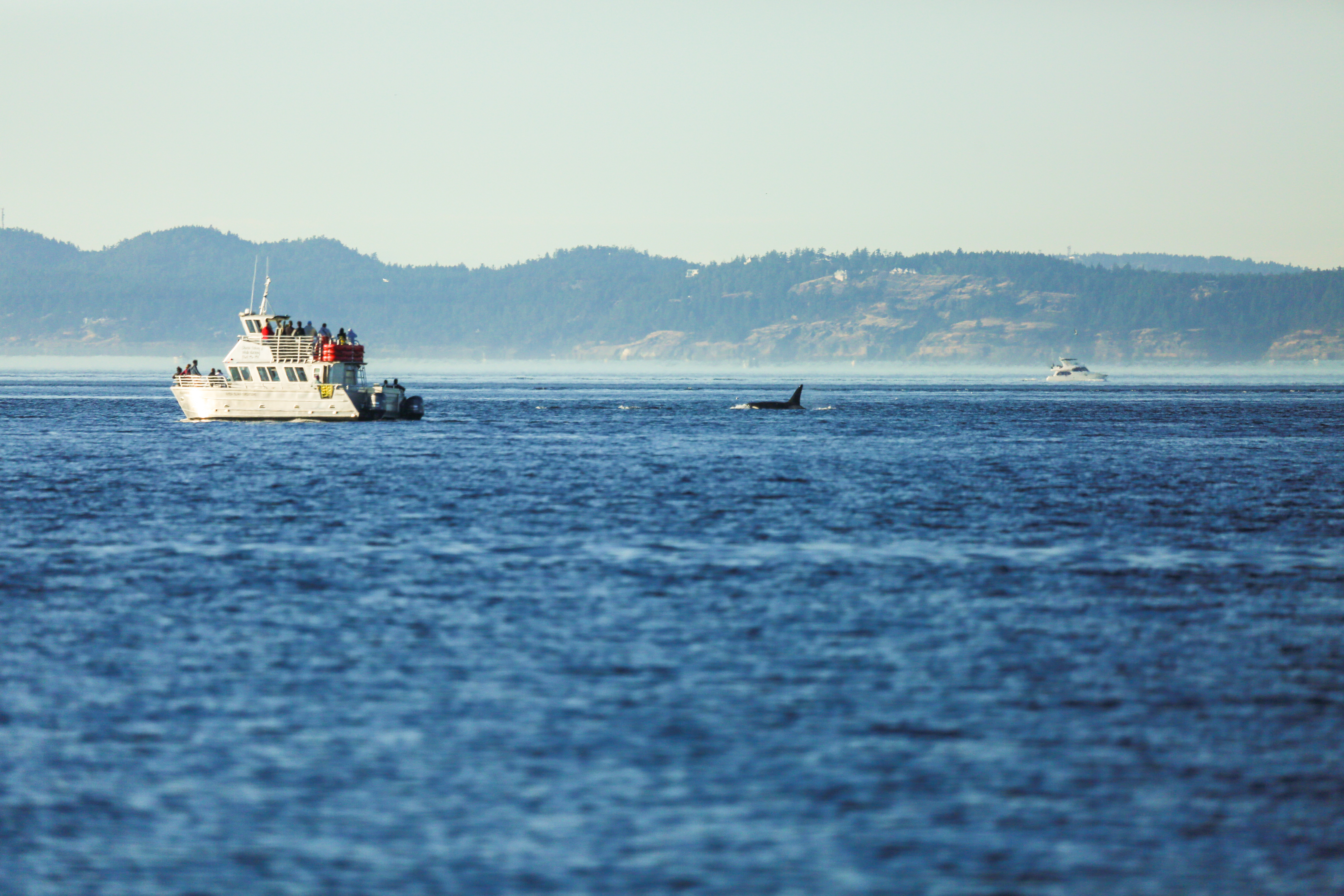 To the human eye, big ships cruising along the west side of San Juan Island this summer might have looked like they were traveling in slow motion. To the perceptive ears of killer whales, those same ships might have sounded a little bit quieter.

That’s because more than half of commercial ships transiting Haro Strait — between San Juan and Vancouver Island — voluntarily slowed down as part of a two-month experiment by the Port of Vancouver, British Columbia. The Port wanted to test how slowing vessels reduces underwater noise — and whether that could help endangered killer whales.

On the noise front, the slowdown appears to be a success, according to the Port’s preliminary analysis. Not only were participating ships quieter, but ambient underwater noise levels also fell by nearly half during the slowdown, which ran from Aug. 7 to Oct. 6.

But how did the resident killer whales respond to those slower, quieter ships?

A team of U.S. and Canadian scientists is now trying to answer that question. Their work could help determine whether enforcing vessel speed limits in the southern resident killer whales’ critical habitat — or other options such as sending ships through in a convoy — might buy the whales some time. The population fell this year to only 76 animals, a 30-year low.

Combined with dwindling salmon stocks and persistent chemical pollutants, noise is one of the top threats to the remaining resident orcas. The din from human activities makes it harder for the whales to catch scarce Chinook salmon, their main prey. At the noisiest times in their critical habitat, southern resident killer whales can lose an estimated 97 percent of their opportunity to communicate in their close-knit pods, which is critical to coordinating their hunting, staying safe and finding mates.

Just weeks before the vessel slowdown was set to begin, oceanographer and ocean acoustics expert Scott Veirs realized it offered a rare chance to better understand how ship noise affects the whales by observing their behavior when ships passed at different speeds and noise levels. The Port of Vancouver planned to rely on computer models to predict the effect on the whales, rather than collecting new data on changes in the whales’ actual behavior in response to the slowdown.

Veirs and his father, retired physics professor Val Veirs, had already been eavesdropping on ships in local waters for about 15 years through a series of underwater listening stations on San Juan Island and around the Salish Sea. They teamed up with marine conservation biologist Rob Williams of the Oceans Initiative, whose observational studies have shown the whales spend less time foraging when vessels are nearby. The University of Victoria also joined in to take bursts of photographs that could be used to detect smaller boats. Seattle philanthropists contributed about $35,000 toward the study, and a whale lover offered free accommodations on San Juan Island to a team of research assistants from around the region.

Now all they needed was for the whales to show up.

Waiting for the whales

On a sunny but blustery morning in early October, two research assistants scanned Haro Strait from the bluff behind Val Veirs’ San Juan Island home. The southern resident killer whales had been worryingly absent in the summer. If the whales did turn up, the team was ready to track their precise movements using surveying instruments. A second person would note changes in their resting, traveling or foraging behavior, plus any vessels in the vicinity.

Nearby, the humming, popping and gurgling sounds of the Salish Sea played through speakers mounted in a wooden box adorned with red, black and turquoise Northwest Native American designs. Heavy black cables down to the water relayed sounds picked up by microphones that Scott and Val Veirs had fixed about 50 meters off the rocky shoreline.

The Veirses' earlier analysis of nearly 1,600 ships passing by their microphones had helped inform the slowdown. Ship speed limits, they found, are one way to quickly reduce ocean noise, which has nearly doubled each decade since the 1960s. They estimated that an 11.8-knot speed limit in Haro Strait would cut ship noise by three decibels, which may not sound like much but, because decibels are measured on a logarithmic scale, actually represents a halving of sound power from the ship. The Port set the voluntary speed limit during the slowdown at 11 knots (12.7 mph).

“That’s the Elwha ferry crossing at 16 knots,” Val Veirs came outside to report. In a sunroom overlooking the water, a tangle of electronics across three desks recorded details about each vessel from its automatic identification system (AIS) signal, along with its sound signature.

On this day, the Elwha was not adhering to the 11-knot speed limit as it crossed the northern end of Haro Strait on its way to Sydney, B.C. (Washington State Ferries said it participated for only the first two weeks of the slowdown due to concerns about on-time performance.) But over the course of the slowdown, more than 60 percent of the 956 piloted commercial vessels that transited the strait did comply, based on the pilots’ reports to the Port. (You can hear Orcasound.net recordings of a vessel at 15 knots and killer whale calls here and of a vessel at 10 knots, also with killer whale calls, here.)

In the first month of the slowdown, participating ships cut their typical speeds by as little as 2.2 knots for bulk carriers to nearly 7 knots for container ships, which tend to be among the fastest and loudest commercial ships. That translated to noise reductions of about 5 to 9.4 decibels for different ship classes, the Port reported.

“What an accomplishment,” marine conservation biologist Williams said of the drop in noise.

Nearly a decade ago, marine scientists and the International Whaling Commission’s scientific committee called for reducing shipping’s contribution to ocean noise by 3 decibels in 10 years. “Damned if the Port of Vancouver didn’t pull it off,” or at least come very close, Williams said.

The next step — and the much harder one — is seeing how this drop in noise affects the whales, Williams said.

That task has been made more difficult by the whales’ record-low appearances in the Salish Sea this summer. The southern residents didn’t show up for the first half of the slowdown, and then they were seen only a half-dozen times before the slowdown ended. A decade ago, the whales were in the area nearly every day throughout the summer. This year, there were too few salmon to draw them back to their traditional summer feeding grounds.

The southern residents “disappeared in a way that we haven't seen in 30 years of studying them," Williams said. “It's not just a problem for the science, it's a problem for the whales,” which are struggling to find enough food.

While the scientists anticipate that less ship noise is better for the whales, they also worry about the trade-offs involved in slowing ships down. Slower ships are in the environment longer, and that could mean a higher risk of accidents and oil spills. It also means the whales are subjected to each ship’s noise for longer. During the slowdown, quieter periods between vessel transits became shorter and noisier, according the Port’s analysis.

“The human analogy might be: Would you rather live right next to I-5 all the time, or out on a quiet country road with occasional trucks going by with their air brakes on?” Scott Veirs said. “I'm not sure which I would prefer, but we definitely don't know which the whales prefer.”

Not everyone agrees that vessel noise should be a focus of killer whale conservation efforts.

“The vessel issue is a distraction,” Ken Balcomb, the founder of the Center for Whale Research who has studied southern resident killer whales for more than 40 years, said via email.

The recent surge of interest in marine noise “provides fishery managers on both sides of the border. . .a convenient way to obfuscate the poor management and greed that created the risk-of-extinction problem for the fish and the whales,” Balcomb wrote.

Williams agrees that “noise can only be a problem because salmon is a problem.” But, he contends, it’s counterproductive to focus on just salmon or just noise.

“Those two risk factors are inextricably linked,” Williams said. While lack of salmon is the biggest threat to southern residents, “it’s also too noisy, and quieting the ocean will make it easier for the population to recover.” Cutting ocean noise by half, accompanied by an increase in Chinook salmon of at least 15 percent, would allow the orca population to grow, according to a recent paper to which both Williams and Balcomb contributed.

Ship noise could also be cut in half by retiring just the loudest 15 percent of the fleet, the Veirses’ research has found. Assigning grades to ships based on how much noise pollution they create, Scott Veirs suggested, could encourage large companies such as Amazon to choose quieter container ships. If quiet periods are important for the whales, then we might ask ships to travel together in convoys.

Piloting his 31-foot research boat Wishart back to Seattle from the San Juan Island study site, Williams mused on his 20 years studying killer whales. “A whole lot of science has been done already,” he said. It may be time to start making some  difficult policy decisions about vessel noise, Williams said, and that means weighing safety issues and economic tradeoffs alongside concern for the whales. A number of factors, including the Canadian government’s approval of Kinder Morgan’s pipeline to export oil to Asia, could drive future increases in Port of Vancouver vessel traffic.

“What we have to do next is to have some really uncomfortable conversations. . .about how much of this acoustic space do we think it is fair to ask the whales to give up." Williams said. “And how much are we willing to give up to have killer whales persist?”

“And those aren't science questions,” he continued. “They are really tough value judgments.”

The researchers are still seeking funding to analyze their acoustic and whale behavior data. The Port of Vancouver plans to release its final analysis of the slowdown, including potential effects on the whales, by next April. The Port said it will use the results, in consultation with vessel operators and other stakeholders, to consider future speed restrictions or other steps to protect killer whales.