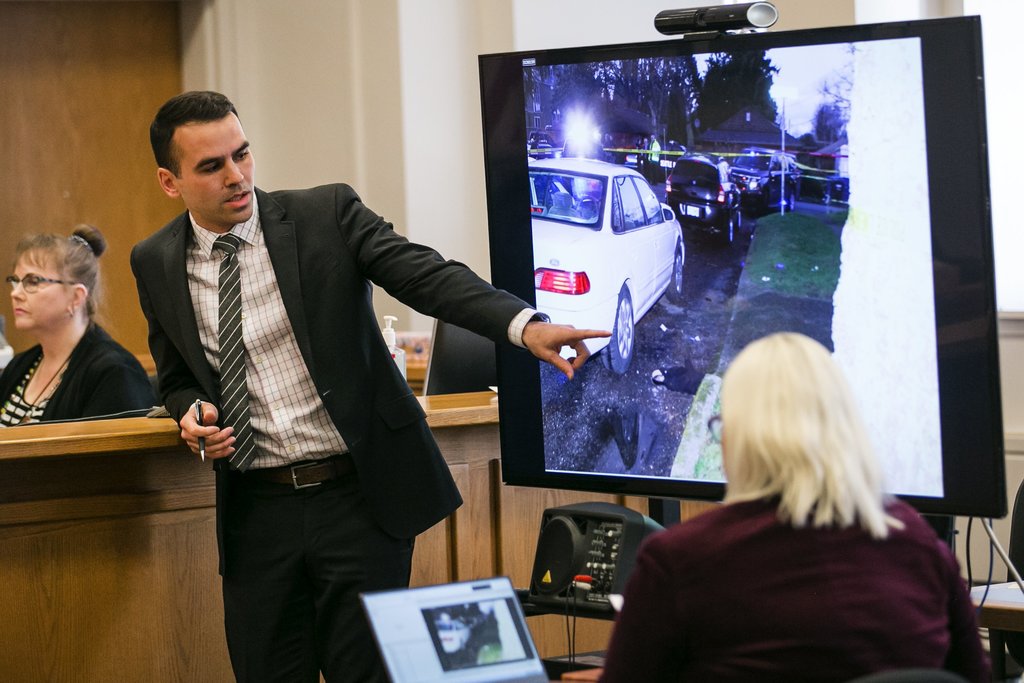 Attorney Evan Bariault uses a monitor to show the area where CPR was performed during an inquest into the shooting death of Che Taylor which involved Seattle police officers Michael Spaulding and Scott Miller on Thursday, February 2, 2017, at the King County Courthouse in Seattle. Credit: Johnny Andrews/Seattle Times (court pool photo)

King County Executive Dow Constantine is announcing a temporary halt on police shooting inquests, a decision that comes as public defenders and advocates for police reform are calling for an overhaul to the process that has repeatedly left victims' families feeling that their concerns went unheard.

As a result of the halt, a highly anticipated public hearing into the shooting death of Charleena Lyles, an African-American mother shot and killed by police in her Magnuson Park home last June, will likely be delayed from its current April date.

In King County, inquests are customary following police shootings and are meant to serve as fact-finding hearings; jurors are not asked to issue “guilty” or “innocent” verdicts, but instead to answer yes-or-no questions laid out by attorneys. The purpose is to create a record of what occurred at a given police shooting, which attorneys or government officials may then use to recommend or pursue criminal or civil charges. In practice, though, charges against officers are never pursued.

In recent months, as Seattle and the Puget Sound region have witnessed several high-profile police shootings, the process has received renewed scrutiny. While officers receive legal support during the hearings, the county provides only a neutral lawyer, and there is no provision for a public defender for the family of the deceased.

In several recent hearings, such as for the death of Che Taylor in North Seattle and Renee Davis in Muckleshoot, lawyers have provided free legal defense at inquests, asking more probing questions of the officers than the county’s neutral attorney is likely to do. (Seattle Mayor Jenny Durkan provided legal help to the Davis family before she was elected mayor.) Families that do not receive such pro bono help must hire their own lawyer or go without — an experience some have found agonizing.

According to the police reform groups Not This Time and the Public Defender Association, families of the deceased did not have legal representation at 22 of the 34 inquests between 2012 and 2016.

On Tuesday, the King County Council is scheduled to consider a proposed ordinance that would provide legal representation to families of people who were killed. Both Not This Time and the Public Defender Association are encouraging people to show up.

“Without family attorneys, the only story we hear is from the police, who always have an attorney at the inquest,” reads a Facebook event item for the hearing. “The cost is small and the public benefit large, to make sure these proceedings are fair and allow a full airing of the facts surrounding an in-custody death.”

The inquest process is also criticized for its narrow scope. It does not allow for examination of policy or procedure that may have lead to the shooting. During the inquest hearing for Taylor, pro bono defense attorneys James Bible and Corey Guilmette were barred by King County District Court Judge Janet Garrow from asking questions that sought to answer what the officers might have done differently. They were limited instead to what actually occurred.

In December, Constantine announced he would convene a task force to review the process. But in a press release Monday, the county executive said he’d been informed by King County District Court Presiding Judge Donna Tucker on Friday that she would decline to appoint judges to inquest hearings.

“In the interest of fairness to all those involved, we will pause all inquests as the Review Committee and community partners seek to better understand what works and what doesn’t, and recommend reforms,” Constantine said in a statement. “I thank the District Court for its engagement over the decades. The decision by the Presiding Judge gives our Review Committee even more urgency, and greater latitude to suggest something new.”

In a statement, family for Tommy Le, who was killed in Burien last summer, said, "the current Inquest process in King County assures that the law enforcement agency that employs the officer responsible for the homicide controls the evidence in the inquest. The process must allow for an independent investigation of police shootings."

Tucker did not immediately respond to a request for comment, but said in a statement, “It is important and timely for the County to review this Executive process.”

In a statement on behalf of the Lyles family, attorney Guilmette, said, "King County Executive Constantine’s decision to place the inquest into Charleena’s death on hold is an extraordinary step, which will delay Charleena’s family in their search for answers. This delay will only be justified if it allows Charleena’s family to ultimately participate in a process that seeks to answer the most important questions relating to her death."

In addition to Lyles' inquest hearing, those for Isaiah Obet, Damarius D. Butts, Eugene  D. Nelson and Tommy Le are all on hold.