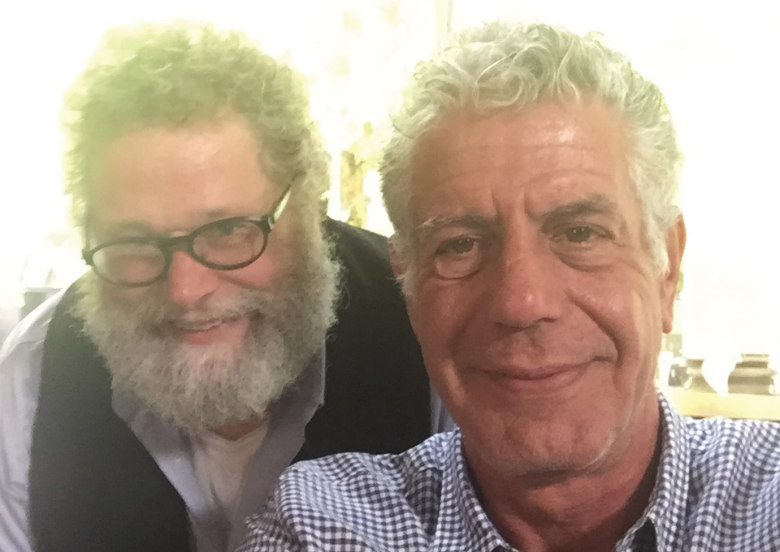 I was sitting across from him over lunch at Taylor Shellfish Farms’ oyster bar in Pioneer Square. A small group of locals had been convened over fresh oysters to explain Seattle to the globetrotting chef-adventurer whose insatiable appetite includes his curiosity.

Anthony Bourdain wanted to know why the Northwest has been such a mecca for serial killers. The question took me a bit by surprise. The lunch had been set up as part of his incredibly popular CNN television series called Parts Unknown, in which Bourdain takes viewers around the world to learn how food, culture and place are inextricably linked. For a show about food, you’d expect the subject to be more Bundt cakes than Ted Bundy. But that’s not Bourdain.

The question about killers seemed a bit off because that phenomenon feels like a part of our past — Bundy is dead, the Green River Killer is in the slammer, the nightly TV news isn’t full of body searches in dreary dens of second-growth alder. Still, it was reflective of Bourdain’s fascination with noirish and taboo topics, along with great food. It’s as if the food tastes better if you are treading down murky paths.

That edge is likely a big part of the show’s success, especially among younger viewers; it has consistent top ratings with 25- to 54-year-old viewers for its cable news Sunday time slot. I’ve watched Parts Unknown and enjoyed it but had no idea about its following until I was asked to be part of the Seattle episode that was filmed here last summer and airs Sunday night as part of the series’ 10th season. When I mentioned my lunch with Bourdain on Facebook, my page lit up with excitement and envy.

The show’s producers seem to have found their way to me from a story in which I was quoted that ran in The New York Times in 2010. The article was about Seattle’s role in turning chicken teriyaki into an under-the-radar fast-food phenomenon, and Bourdain’s folks were curious about teriyaki in Seattle. But instead, I was asked to join Bourdain over a more classic Northwest repast to talk about changing Seattle, and that is a hot topic.

Such segments are familiar to anyone who has watched the show: A few locals are gathered over a regional meal, answering Bourdain’s questions. With me were Fred Moody, author of Seattle and the Demons of Ambition, and Jack Whisner, a longtime planner for Metro and a transit advocate. The topic was Seattle “now and then,” and whatever else Bourdain wanted to discuss. There was no prep, no script. Just sit down and talk — and eat good food.

The film crew took over part of Taylor Shellfish, but the restaurant stayed open to the public. We had a well-lighted table near a window and ordered microbrews, oysters and a fresh batch of smelt that had been netted off Camano Island. The small fish were lightly batter-dipped and deep-fried, and we ate them like French fries.

Bourdain entered, and he looked and behaved just like he does on TV. He might be a silver-haired 60-something, but he seemed youthful — culturally savvy with tattooed arms and a love of grunge and music. He is friends with musician Mark Lanegan, formerly of Screaming Trees, whose music is used on the show. I couldn’t help but think that Bourdain resembles a worldly, maybe hungover, Pete Carroll, coach of the Seahawks. Both seem to have extraordinary energy, keeping up a daunting pace.

Bourdain told us he was staying at the waterfront Edgewater (“Fish from your window!”) Hotel. He said that he’d learned the truth about a legendary incident regarding sex, fish and a groupie that took place there in the ’60s. There are many different versions of the story. Suffice it to say that the fish was not a mud shark, the individual involved was confessedly the manager of Led Zeppelin, and it was, it is claimed, consensual.

He peppered us with questions and observations. Beyond his curiosity about serial killers, we talked about legalized marijuana — Bourdain had loaded up on merchandise at a Puget Sound–area pot shop — and how Amazon has changed the city. Bourdain complained about the proliferation of tech bros — he ran into a bunch at The Edgewater who were, he said with disdain, “high-fiving each other” in the bar. I couldn’t help but think of John Keister’s classic Almost Live sketches of the “high-fivin’ white guys.” Are these now the signifiers of Seattle’s culture? Is that better or worse than serial killers?

Bourdain approached the lunch like a good reporter, fleshing out topics, peppering us for impressions, observations, poking into the city’s corners. Food conversation wasn’t much on the menu. We were observers of local culture, and he probed us for insight and flavor. We tried to provide it.

Previously, my main connection with Anthony Bourdain was culinary. Every Christmas, my daughter Sophia and I have an arrangement: I buy the fixings for Bourdain’s cassoulet recipe at Pike Place Market— everything from duck confit to goose fat — and she makes a memorable holiday meal for the family. It’s a very hearty, rich, no-nonsense French stew. Parts Unknown has many of the same qualities. It was fun to be, briefly, one of the ingredients.

This column previously appeared in the December 2017 issue of Seattle Magazine.