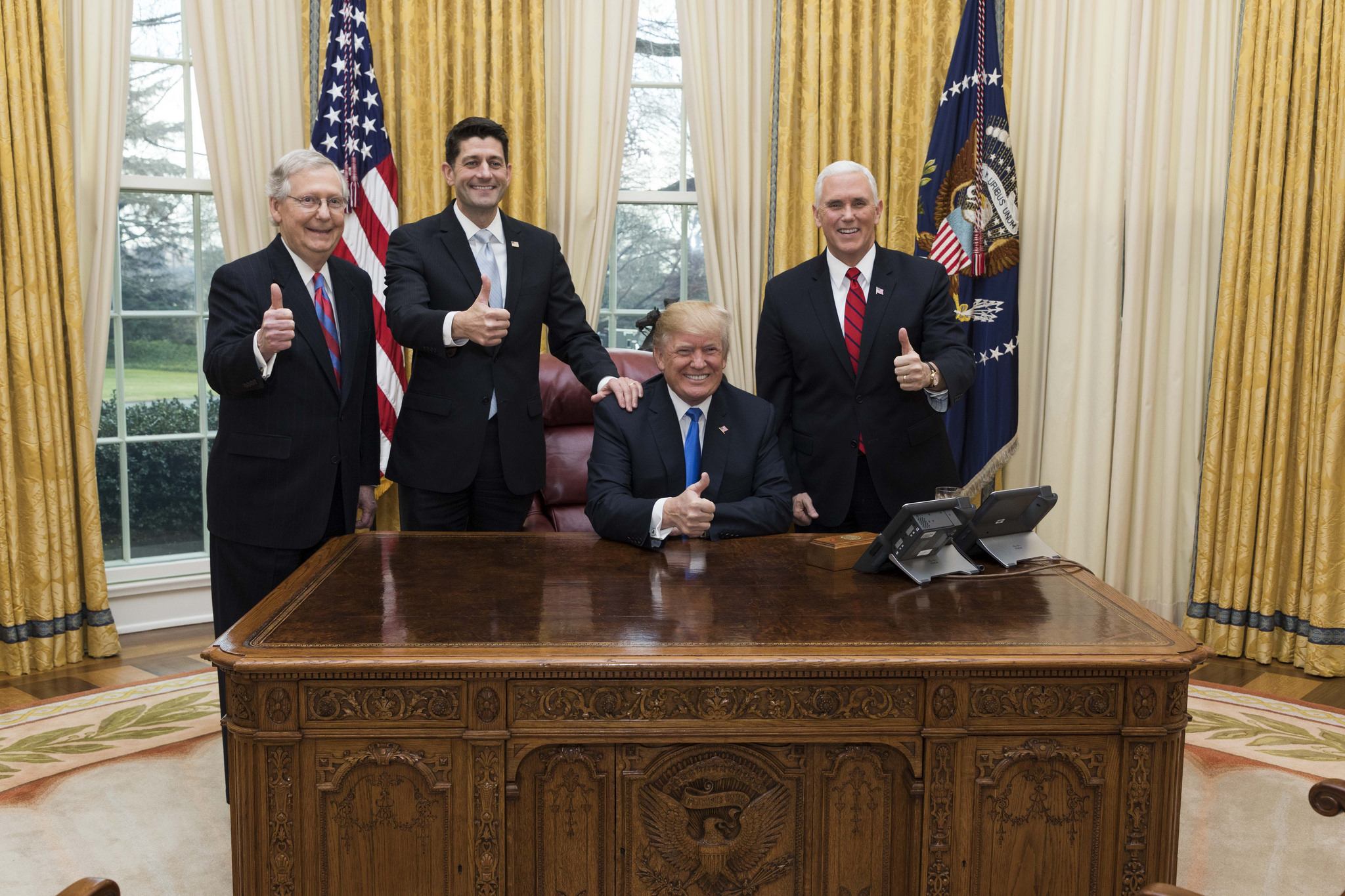 If Donald Trump were not president, Jenny Durkan would not be mayor of Seattle.

Insiders in legal and political circles expected Durkan, President Barack Obama’s U.S Attorney for Western Washington, to head east for a high-level appointment in Hillary Clinton’s Justice Department, maybe even Attorney General. Smart, loyal, experienced, politically savvy, Durkan was a natural. Being a woman and gay were also seen as a plus. But that trajectory evaporated on election night 2016.

If Donald Trump were not president, Dow Constantine would have an easier shot at being Washington’s next governor. Constantine thought about running in 2012 but decided to wait. Assuming Inslee doesn’t run for a third term, the King County Executive, former state senator and member of the West Seattle High School Hall of Fame had a smooth path in front of him for the Democratic nomination.

But then Trump’s team botched the roll-out of a temporary travel restriction on people from six Muslim-majority nations. Washington Attorney General and Bob Ferguson, who had only modest success on his state legislative agenda, jumped on the issue and sprinted to court, painting the new President as a reckless bully motivated by anti-Muslim animus. The courts (at first) agreed. The liberal base swooned. More suits by Ferguson followed. Then more. Ferguson, a former King County Council member, is now the Democrats’ rising star.

And if Donald Trump’s presidency had not energized Democrats and changed political dynamics generally, Washington’s state Senate would likely still be in Republican hands, and the House would be too, after the November mid-terms. Instead the GOP will have to struggle to keep from losing ground.

On June 16, 2015, when Donald Trump stepped off the escalator at Trump Tower to announce his candidacy for president of the United States, insiders in both political parties regarded him as either an oddity or a joke. The Republican field of 16 candidates was already considered historically strong.

Personally, I wanted a gutsy outsider who was willing to mix it up with the D.C. insiders, so I supported Wisconsin Gov. Scott Walker. To me Trump seemed. . .well, outside the outside. But he was connecting with people no other politician could reach. I remember reading about his rally in Everett. A man in his early 60s from Lake Stevens — who hadn’t voted for more than 30 years — not only decided to vote for Trump, he went to the rally.

I liked that Trump cared about people who the Republican establishment didn’t care about and that Democrats had stopped caring about. They’re not like many of my neighbors in Bellevue, but they remind me of some of the people I grew up with in the 1960s and ’70s in West Seattle.

For the Democrats, Hillary had a challenger on her left, but it was thought that Bernie Sanders would make her look more reasonable and moderate. Perhaps there would be a November rematch between the Bush and Clinton families, featuring Jeb and Hillary.

By the time of GOP National Convention, all the Republican challengers had been scattered like bowling pins (Gov. Walker was an early casualty) and the Bush dynasty was done. Less than three months after that the Clinton dynasty lay in ruins and Barack Obama’s legacy was already shrinking. Before even taking the oath of office, Trump had changed the landscape of American politics.

And the change hasn’t stopped. Despite the maddening sideshows, antagonistic tweets, media food fights, incendiary comments about people and nations both, tantrums, petulance and self-inflicted political wounds, Donald Trump is making change that is bending the curve of history.

There are two standards for measuring a president’s success: First, did he keep most of the promises he made and, second, is his agenda leading to more peace and prosperity? By either one of those measures, Trump’s first year has been surprisingly successful.

Yes, I know progressives, especially in Seattle, are tearing their hair out over Trump, so let’s step back, set aside the rhetorical distractions for a moment and look objectively at the president’s record, starting with what can be considered six Big Promises he repeatedly made at those massive rallies he held like the one in Everett.

1. Reduce taxes on businesses and give a break to individuals, particularly families. Done. Critics decried the Tax Cut and Jobs Act as a giveaway to the rich, but a couple with two kids earning $48,000 is about to see their income tax bill shrink from about $3,000 to $0.

2. Destroy the Islamic State. 98 percent done. The fight against ISIS began turning in our direction two years ago under President Obama, who belatedly recognized the threat. But under Trump momentum rapidly accelerated, partly because he changed the rules of engagement, allowing commanders in the field more autonomy making decisions. It worked. One year ago ISIS controlled 23,000 square miles. Now it controls virtually none, not even their putative capitol, Raqqa in Syria.

3. Reduce illegal immigration by enforcing existing law and building a wall. The president claimed that illegal immigration fell by more than 75 percent his first year. No, not right, but the New York Times, citing data from U.S. Customs and Border Protection, acknowledges that it has fallen close to 40 percent. As for the wall, Congress has yet to pony up a penny, but that may change when the DACA issue is settled.

4. Repeal and replace Obamacare. With the repeal of the individual mandate, this has started. Both the Republican Congress and the White House were incoherent, indecisive or both during last year’s campaign to replace the Affordable Care Act, yet somehow they still managed to come within a single vote of partially doing so. This will be a critical year for Trump and Congress to prove they’ve got a better alternative.

5. Sign a massive spending bill to put people back to work rebuilding America’s infrastructure. Not yet. It’a good issue heading into the mid-term elections.

6. Put more conservatives on the Supreme Court and appeals courts. Trump won approval of an impeccably qualified conservative to the High Court, Neil Gorsuch. Trump is winning further down the ticket, too. A dozen of his nominees for circuit courts were confirmed in his first year, which had never happened before.

Trump has kept three of those six promises and partly achieved two others. Not bad one year in.

The second standard of a president’s success — peace and prosperity — is easy to measure. The New York Times Paul Krugman predicted on election night that the economy would tank under President Trump. It hasn’t. Trump is on track to guide the economy to more than 3 percent annual growth for the first time in 11 years. The stock market is booming. Unemployment is down to 4.1 percent from 4.8 percent when Trump took the oath of office, with an important twist: Jobless people who gave up looking during the Obama years are heading back into the workforce.

Regarding peace: With ISIS essentially vanquished, North Korea — the hot spot Obama allegedly warned Trump about — has agreed to participate in the Winter Olympics in Seoul. Talks between North and South are under way. South Korean President Moon Jae-in credits Trump: “I give President Trump huge credit for bringing about the inter-Korean talks, and I’d like to thank him for that.” Who would’ve guessed?

And yet within all this success, an irony. The Republicans may take a hit in the 2018 mid-term elections this November anyway. Part of it is the usual cycle in a president’s first term: Ronald Reagan lost 27 seats in the House, Bill Clinton lost 54, Obama lost 63. Another is that voters may tilt toward the Democrats simply because they’re getting tired of all the hollering. Trump can do a lot to change that. He’s got a record to run on. But the tone has to match the record. That’s not happening.

His agenda is more popular than he is in the polls, partly because people sense that he’s often fighting to settle personal scores rather than battling for a higher purpose. Anger is effective, but only when it’s rarely used.

If Trump wants to keep that Republican majority, the tone, not the agenda, needs to change. If it doesn’t then it will be the president himself, not the Democrats and not the media, who buried the good news.