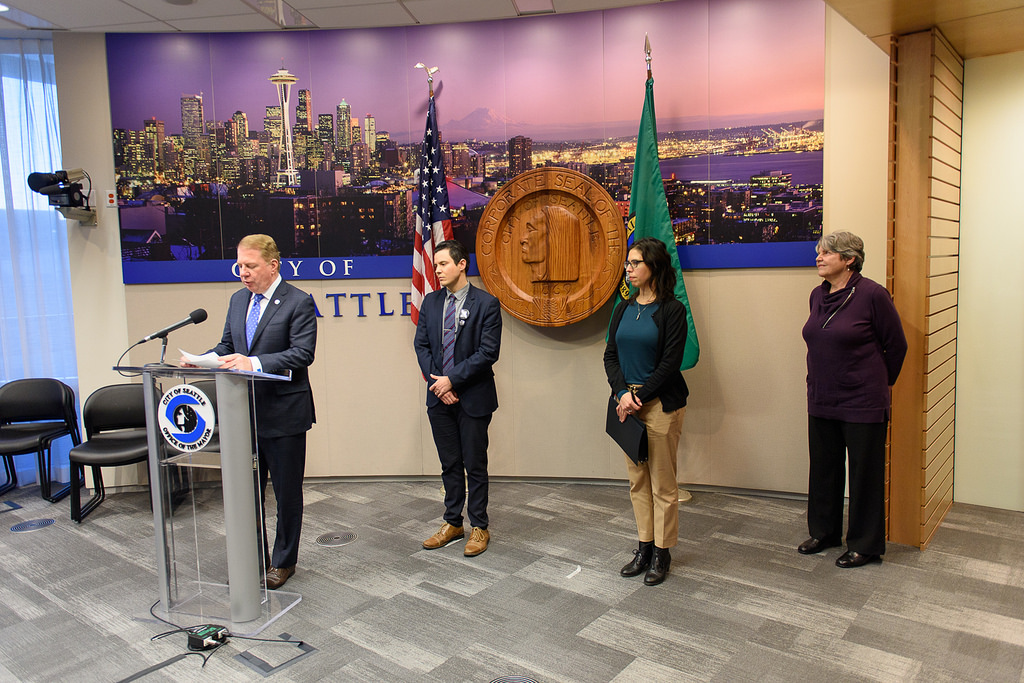 Seattle's Chief Technology Officer, Michael Mattmiller, and the Director of the Office of Labor Standards, Dylan Orr, both resigned Friday, Mayor Jenny Durkan announced today. That makes a total of nine major department head changes at City Hall in Durkan's 52-day tenure, with only a handful more awaiting their fate.

Mattmiller and Orr, both appointees of former Mayor Ed Murray, join seven other directors who have departed since Durkan took office. They include the directors of the Office of Civil Rights, the Department of Transportation, the Seattle Police Department, Seattle City Light, Seattle Parks and Recreation, Human Resources and the Office of Economic Development.

“As I continue to build my cabinet, I want to thank Michael and Dylan for the work they have done for our City and residents. Dylan was critical to jumpstarting the Office of Labor Standards and overseeing the implementation of Seattle’s historic minimum wage law,” said Mayor Durkan in a statement. “Michael has led one of our largest departments and aimed to make Seattle one of the most innovative cities on the frontline of emerging technology.”

Mattmiller leaves the new Department of Information Technology halfway through its massive consolidation of every IT desk in the city, a process begun under Murray that has already expanded the department from 200 to 600 employees.

While largely unknown outside of City Hall, Mattmiller was a powerful figure behind the scenes. He enjoyed broad authority over most technology purchases in the City of Seattle, getting the final word on everything from the Seattle Police Department’s addition of body cameras to a new system for tracking permitting in the Office of Construction and Inspections to organizing software for meetings. He was also in charge of overseeing the city’s new ordinance on surveillance technology.

His tenure was not always smooth. As Crosscut reported last year, the consolidation was panned by employees and customers as inefficient and overly top down. Employees of the IT department said they were treated poorly and that workflow was clumsy. Members of other city departments grew frustrated that purchasing even basic equipment, like printers and desktop computers, could take weeks or months.

One IT employee wrote in an email to Crosscut, "We are hugging each other today."

In a message to IT employees, Mattmiller said he was resigning with "mixed emotions." He added, "It’s amazing to think of the positive changes we have effected in how the City manages and uses technology in four short years."

Dylan Orr led the city's relatively new Office of Labor Standards (OLS) set up specifically to enforce the city's suite of new labor laws and to educate employers and employees on the rules.

The office had some struggles early on as the Murray administration moved slowly to find a director. When Murray named Orr, there was some backlash as he was not in the four finalists put forward by a volunteer search committee.

Orr had worked previously in the Department of Labor and was President Obama's first openly transgender appointment.

Since he took over, Orr has steered the lightly funded office through the implementation of the new minimum wage, paid sick and safe time and the city's new law on secure scheduling. OLS was recently rewarded more funding, but their rate of investigations has nevertheless dragged.

Chief of Staff for Seattle IT Tracye Cantrell will become the department's acting director and Martin Garfinkel will serve as the acting Director of the OLS, subject to the confirmation of the Seattle City Council.

Since her November inauguration, Durkan has been systematically meeting with cabinet members. So far, the departures have been painted as “mutual.” But while some departures have been for personal reasons, such as Police Chief Kathleen O’Toole’s who left to return to Boston where her husband lives, others are a reflection of Durkan’s priorities.

She made clear Seattle City Light’s Larry Weis was not living up to her expectations. Former head of transportation Scott Kubly had his own troubles, getting dinged by the ethics department for not disclosing ties to the bike sharing company that received a contract from the city. And Durkan has expressed frustration with how the city's Race and Social Justice Initiative has been implemented, a task overseen by Patricia Lally, the departed head of the Office of Civil Rights.

Durkan has asked a number of Murray appointees to stay on, including the heads of the Office of Housing, Human Services Department, Office of Planning and Community Development, the Seattle Fire Department and a host of others.

Meanwhile, Kathy Nyland, Director of the Department of Neighborhoods, continues to wait in limbo.