Uncertain future for a local Salvadoran family in Trump's America 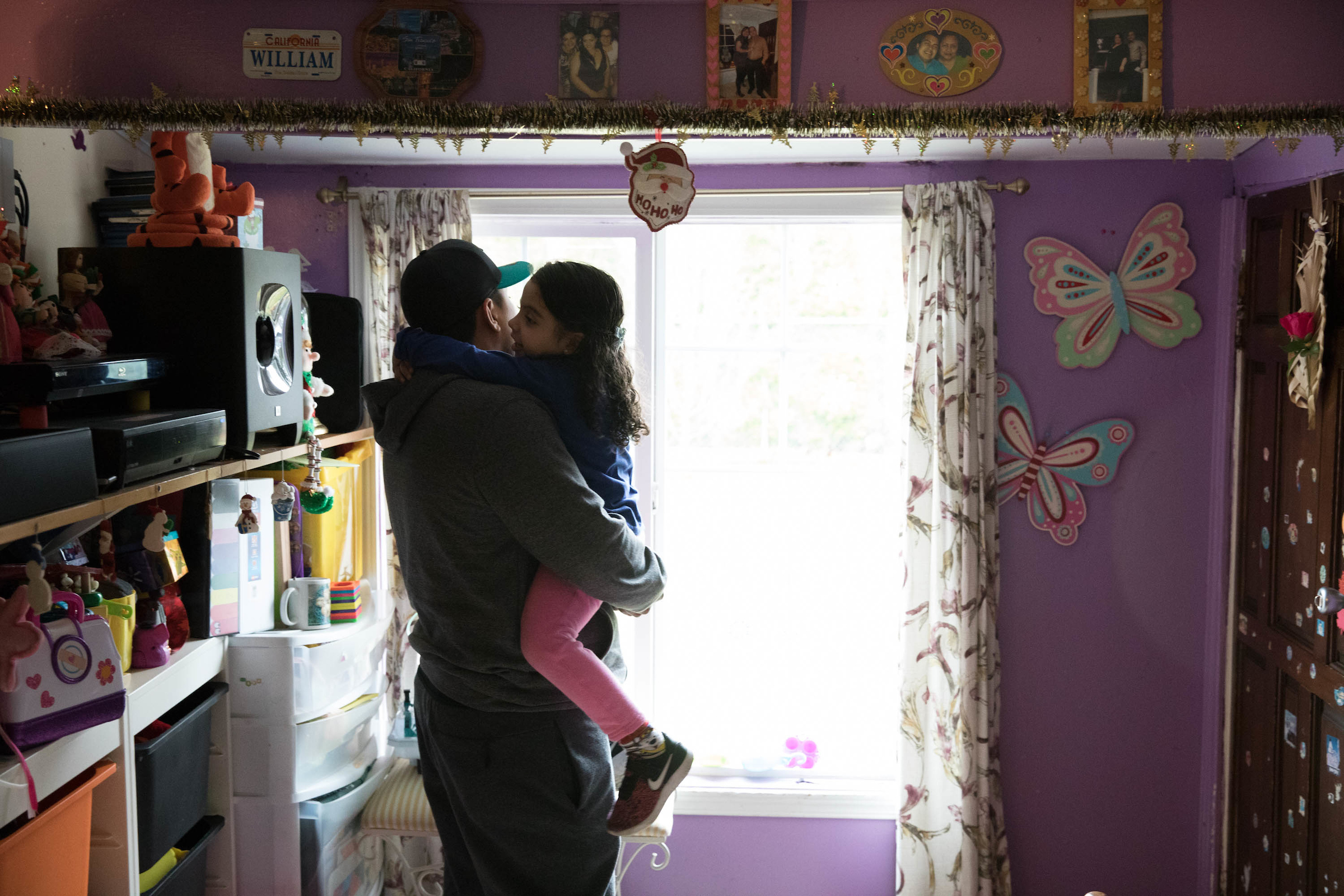 Hector Ardon, son of William Ardon, with his daughter at William's home in White Center on January 10. Hector is a recipient of DACA, or Deferred Action for Childhood Arrivals.

In a small, lime-colored house, on a White Center street lined with modest homes, live three generations of a family whose roots trace back to El Salvador.

Inside, portraits of daughters and grandchildren plaster purple walls. A sign that reads “BELIEVE” hangs in the living room. On another, a poster of the Space Needle. A large TV sits crammed between toys.

A tight-knit family occupies the house. William Ardon is the patriarch. He is 52, a father, grandfather and a Glacier Fish Company employee who inspects seafood for a living. He’s worked for the Seattle-based company for the last seven years. He lives with his wife, the woman who had been his longtime partner and whom he married on Dec. 15 in a nearby courthouse. (The couple surprised their children with the news on Christmas). Two daughters and three grandchildren share the tiny home.

The other day, Ardon's son Hector, who lives close by, stopped to visit. Hector, 26, is a recipient of the program known as Deferred Action for Childhood Arrivals, or DACA.

Now, after more than a decade, the Ardon family’s living situation could soon radically change. Not only because of the Trump administration's attempt to end DACA, which would effectively deport Hector. But the scrapping of another immigrant-protection program earlier this week could dramatically affect them. Temporary Protected Status, otherwise known as TPS, was signed into law by President George Bush in 1990. The status allows individuals, from countries where ongoing conflict, environmental disaster or other extraordinary circumstances make it too dangerous to return, to legally remain in the United States.

That was the case for William Ardon. Ardon came to the United States in 1991, fleeing the violence of the 12-year Salvadoran Civil War, which killed tens of thousands. "I had no choice but to come," Ardon said in Spanish, near tears while sitting on his living room couch. He’s managed to stay in the country due to TPS, which he was granted in 2001 after a pair of devastating earthquakes struck El Salvador.

“The immigration system needs fixing," he said, "but I don’t think the response should be separating families and traumatizing children."

According to the Center for American Progress, a public policy research institute based in Washington, D.C., more than 300,000 people nationwide benefit from Temporary Protected Status. Most TPS holders are from El Salvador, Honduras and Haiti. Here, in Washington state, approximately 2,900 people have TPS, the majority of whom are from El Salvador. In addition, there are about 3,000 U.S.-born children in Washington state whose parents benefit from the program. The Center for American Progress estimates that approximately $149 million would be lost from state GDP annually without TPS holders from El Salvador, Honduras and Haiti.

Proponents of ending the TPS program argue it was always meant to be temporary and that reforms are needed to ensure there are clearer guidelines for when protections should be offered and extended.

In a statement, the Department of Homeland Security said that, after careful consideration, it concluded Salvadorans could return to their home country because "the original conditions caused by the 2001 earthquakes no longer exist."

But critics say doing away with TPS serves as yet another sign that the Trump administration is unsympathetic to the plight of immigrants. The administration's decision arrived just weeks after more than 45,000 Haitians lost protections granted after the country's 2010 earthquake. Experts say others in the program, such as Hondurans and Syrians, may soon lose protections as well.

Critics also cite the administration's attempts at enforcing a Muslim ban and the recent termination of the Central American Minors program, which allowed children fleeing violence in El Salvador, Guatemala and Honduras to apply for refugee status in the United States before leaving home, as other examples of the administration's disdain for people of color.

In a statement, U.S. Rep. Pramila Jayapal, D-Seattle, said it was “unfathomable that the administration would deport people back to one of the most dangerous parts of the world." (Jayapal is sponsoring a bill dubbed the ASPIRE Act, which would allow TPS holders to apply for permanent residency.) Matt Adams, legal director of the Northwest Immigrant Rights Project, argues the current administration fails to recognize that immigration officials should focus on criminals or dangerous individuals, rather than the immigrant population at large. “In the end, there’s really no review," he said. "It’s just anybody they can round up.”

Legal experts say TPS holders who hope to remain in the country face limited options. Some may attempt to gain refugee status or asylum, but experts caution the administration has made those paths even more limited and difficult. The administration dramatically lowered the cap on the number of refugees the country would accept this year to 45,000, less than half of the maximum of 110,000 allowed in 2016. Others might attempt to gain a green card.

On Thursday, the national immigration debate once again triggered headlines after Trump, according to the Washington Post, referred to Haiti, El Salvador and African nations as "shithole countries." That characterization was made by the president in a discussion with senators and House members about protecting immigrants. Although the White House didn't deny the president had used that language, on Friday Trump tweeted: "The language used by me at the DACA meeting was tough, but this was not the language used.”

Back in White Center, Ardon called out to his granddaughter as she pranced around the living room. Her father, Hector, and his sisters listened as grandpa praised his granddaughter's intelligence.

“For me, it doesn’t make sense that something like this should happen,” Ardon said, referring to the administration's decision to end the TPS program. “Even my 11-year-old grandson asks me why this is happening. Psychologically, it's already affecting him."

Ardon can legally remain in the country until September 2019. He says he plans to talk to an immigration lawyer but remains concerned about the future of his family, especially his children.

"What hurts me is the possibility that my family might be separated.”

Son Hector's fate hinges on the salvation of a different immigration program — DACA — which a federal judge recently ruled must continue until lawsuits over the administration's effort to end it are resolved. But anyone who returns to El Salvador, Ardon maintains, faces a precarious life surrounded by violence.