In Whatcom County, farmers have much to say about the urban-rural divide. 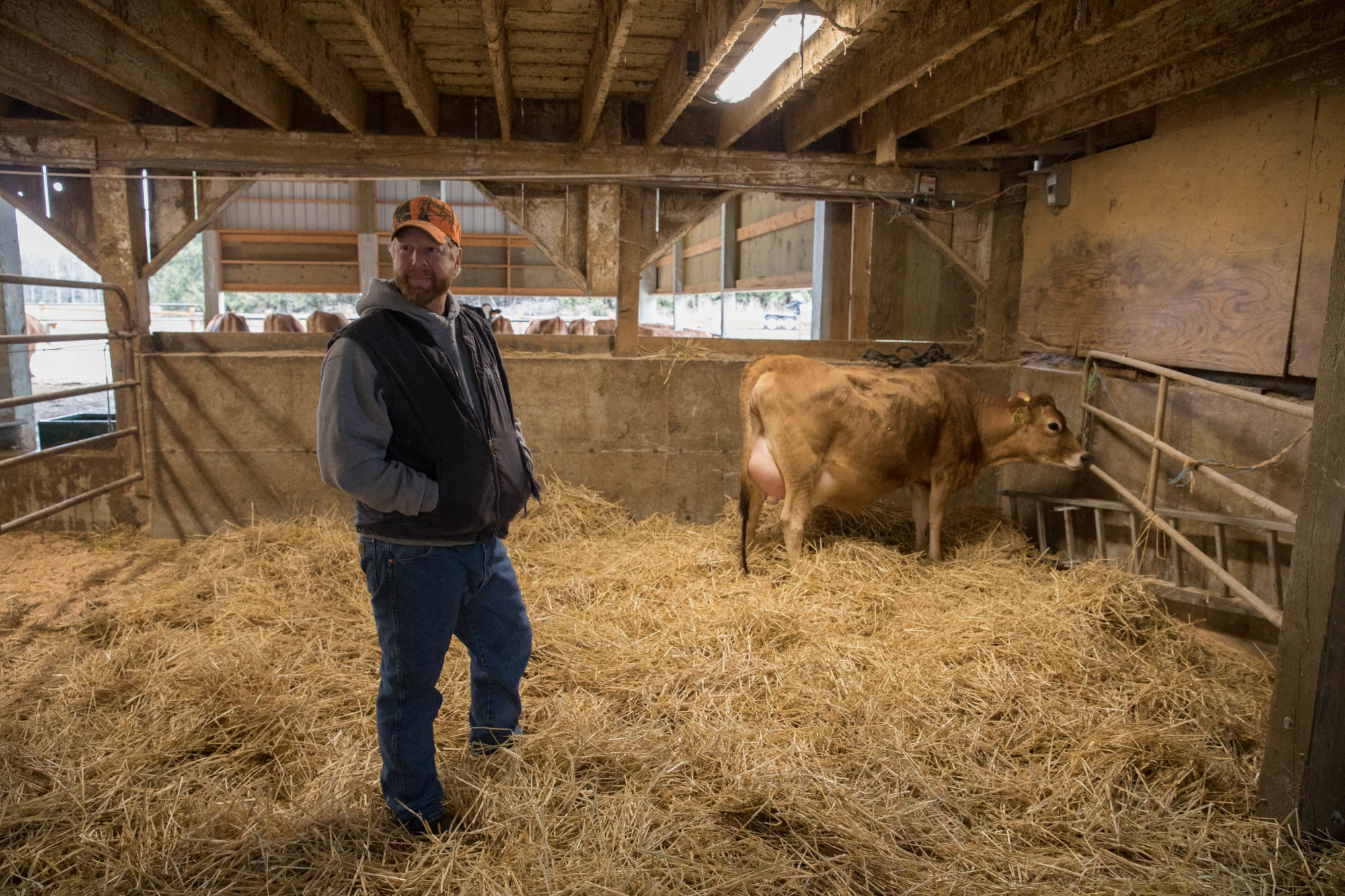 Rich Appel stands inside the original barn at Appel Farms near one of his cows, which will soon be calving. While the family business has grown and changed over the years, it still remains in the same location near Ferndale, Washington where it started more than a century ago.

BELLINGHAM — We pulled our car into the icy barnyard off Double Ditch Road in the Nooksack Valley north of here. The farm had been cut off by a recent ice storm that downed power lines and blocked roads. The snow-covered valley looked and felt like Siberia, the cold Canadian Cascades looming nearby.

I got out of the car with a canvas bag and walked toward dairyman Larry Stap, whose family has run the Twin Brook Creamery going on five generations. Balding, lively, a bit of an elfin grandpa, Stap’s ears have been sharpened by experience. He could have mistaken my bag’s slight tinkling sound for ice. But rather he exclaimed: “I hear bottles.” I handed him a sack full of empty Twin Brook milk bottles. When my wife learned that I was going to be visiting the farm, she suggested I return our stockpile of empties. That hand-off was a signal that I, a Seattle consumer, was intimately connected with the creamery’s rich 100 percent Jersey milk. The product produced on this farm north of Lynden is purchased routinely at our urban co-op in the heart of Capitol Hill. 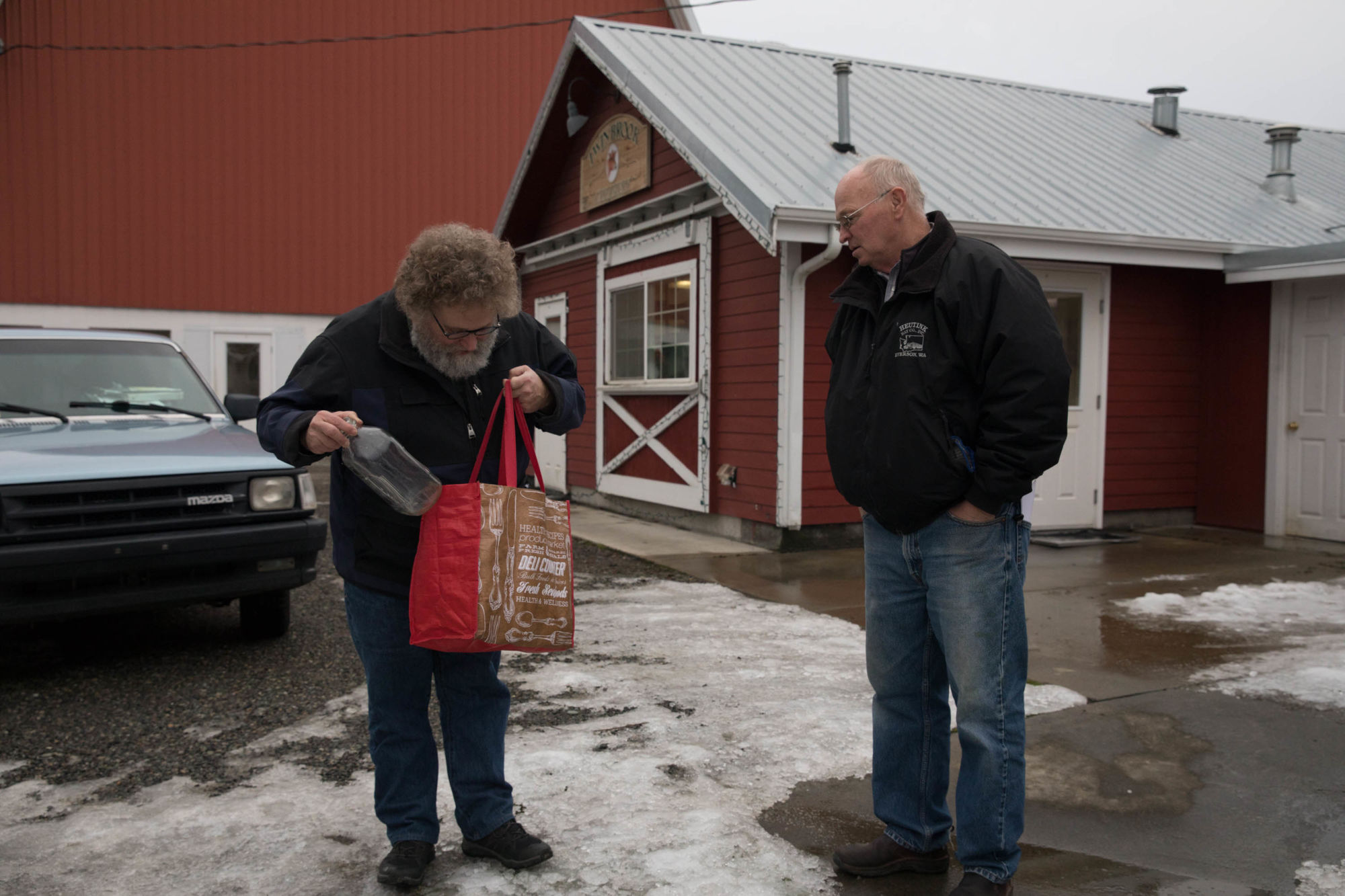 We Seattleites love our farmers’ markets, but do we love our farmers? Do we know anything about them or what it takes to get great food from farm to table? What is our future as a town of foodies?

We have some romantic notions about family farming, but some farmers wonder if we really care. Puget Sound has lost 60 percent of its farmlands since 1950. Urban growth and sprawl are part of that, so too are economics and markets. Yet the demand for local foods is growing both with the population and with palates that want local bounty that meets a wide range of tastes and ethical standards. At the same time, farming’s struggles continue and the number of farms is declining.

Politically and culturally, the future of farms is a national story. President Donald Trump this week told a Farm Bureau convention in Nashville that farmers had what it takes to “make America great again” and promised to end regulations that have stymied production. Yet some in the ag industry might also struggle under Trump policies regarding trade agreements. And some family farms might see higher taxes under the GOP’s new tax bill.

But farming is also a very local story. The state’s urban-rural divide shows up in a microcosm within Puget Sound itself. Visiting Stap at his farm was a chance to learn what farmers in this fertile chunk of the region are worried about, and how attitudes in Seattle might impact them.

He wanted to talk challenges of connecting urban and rural. I agreed and asked to be introduced to local family farmers so we could hear about their operations and concerns. We visited two other family farms that day: Appel Farms, a dairy and cheese-making operation in Ferndale and Ebe Farms, a grower of seed potatoes located near Custer. Those farms, like Twin Brook, were founded in the early 20th century by Dutch immigrants whose descendants still run them. They make a living today selling what you might think of as boutique or specialty products. 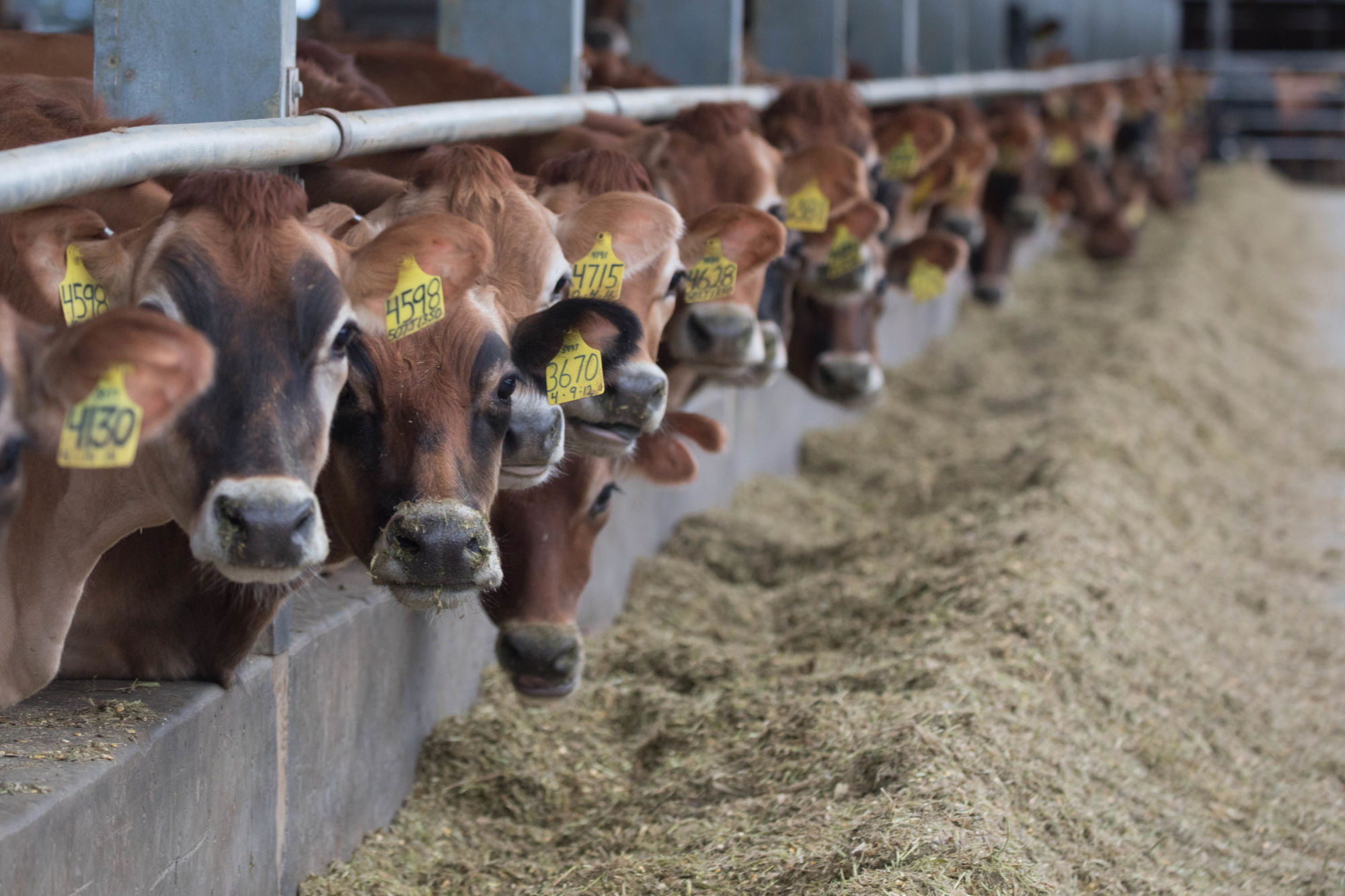 A long row of Jersey cows poke their heads out to feed at Appel Farm near Ferndale, Washington.

A long row of Jersey cows poke their heads out to feed at Appel Farm near Ferndale, Washington.

The Nooksack Valley is noted for its settlers from Holland and the strict moral codes of the Dutch Reform Church. The town of Lynden was once famous for a law that banned drinking and dancing under the same roof. I asked Rich Appel of Appel Farms why his Dutch ancestors chose to settle in this part of Whatcom County. He said the valley has much the same climate as Holland and grew the same grass Dutch cows were used to eating. Stap added that forbearers from Holland weren’t deterred by the soggy fertile ground.

The Dutch farming community seems close. The farmers we met knew each other; their families had farmed and gone to school and church together. Some are openly motivated by Christian faith. I asked Rich Appel what that meant to him as a farmer. “To take care of the animals and the land to please God,” he said. Stewardship and happy cows are a goal. 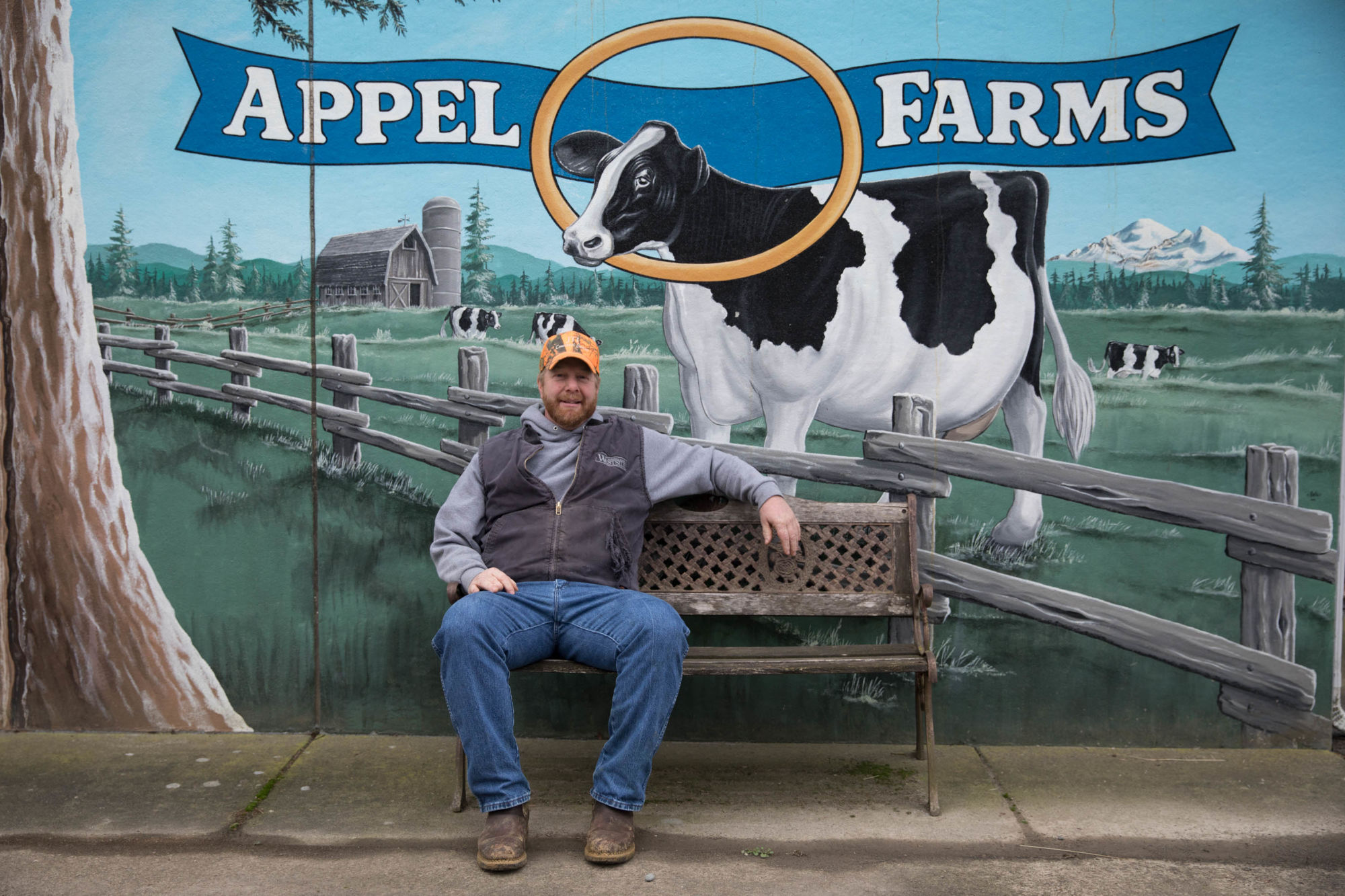 Where Stap focuses on producing milk and cream from his more than 200 Jersey cows, Appel and his family are cheese makers. Their brown-colored Jerseys and black and white spotted Holstein cows produce milk for a variety of cheeses, including gouda and paneer. They have recently added a deli/coffeehouse on the farm, which sells their products and sandwiches.

The 100-years-plus family investment of blood, sweat, tears and financial equity, plus attachment to place and faith, is an anchor and motivator for these farmers. It follows that perceived existential threats would be of huge concern. They believe they face some significant ones. That includes various regulations about farming practices, permitting and water access that are both regional and state issues. They also feel tensions with their urban customer base. That urban-rural split we talk about in Washington, they say, is also reflected within Whatcom County itself. In this case, Bellingham is the “Big City” and “rural Washington” is the farm country of north Whatcom County. Rich told me that an East-West road just north of Bellingham is the demarcation line. “We call it The Smith Road Wall,” he says.

Bellingham is surrounded increasingly by sprawl. Farmland is scarcer and land prices in rural parts have risen. As a Costco goes up or strip malls grow, farmers are squeezed and expansion of successful operations becomes more difficult. Fred Likkel, executive director of the Whatcom Co. Family Farmer’s organization, says local dairy farms that have sustained the rural economy for more than a century are vanishing: there were some 450 in the early 1980s, he says. Today there are fewer than 100.

Not that those dairy farms have become parking lots. Berry farms are expanding in the valley as the region produces more raspberries and blueberries. But agricultural uses are declining. Likkel says that if you dip to under 100,000 acres of active farmland, you start to lose farm infrastructure — equipment dealers, hay suppliers, veterinarians, feed companies and a host of other businesses. Whatcom, Likkel says, is just above that minimum number of acres. As an example of a once rich dairy country that has disappeared, the farmers point to the Olympic Peninsula. In King County, all you need to do is look at the retail and industrial sprawl in the Kent Valley to see that some of the richest soil on earth has been paved over for malls and factories.

The farmers have to adapt, and if land prices soar or new regulations require too much mitigation or new investment, farms that are already stretched with debt can find it difficult to hang on. If, say, milk prices barely cover costs, how do you survive?

Surviving farms have tended to specialize in urban tastes: milk with less processing, exotic local cheeses or in the case of Greg Ebe’s potato farm, small red, yellow, purple and fingerling potato seedlings that are sold to farmers in California. These seedlings feed the appetite for more nutritious and easily prepared potatoes.

Ebe’s operation also reveals another survival adaptation: science and technology. Those seedlings spend much of their early life in sterilized rooms and test tubes then hydroponic greenhouses before they are planted for later harvest to ship as seed (one seed potato, by the way, produces about ten edible ones). Looking at his high-tech growing operation in a large warehouse-like facility, one realizes that in agriculture today it probably helps to have a solid STEM education.

Family farmers can be a tad reluctant to show off some of their high-tech stuff for fear people will dismiss them as “factory farms,” Honcoop told me. The farms we visited use new technologies to make the process of, say, milking cows easier on everyone — cows included. At Twin Brook, no human interferes in the milking process. Cows walk into a stall to be milked on their own time schedule (usually two or three times a day) and the task is done by a computerized milking machine that attaches suction tubes to their udders using lasers for guidance. A computer tracks each cow. Every cow wears a step meter so farmers can track how much they are exercising and variations in behavior that might tip farmers off to abnormalities. Rich Appel’s farm has a “robot” that comes along the perimeter of the open-ended cow barn and nudges the feed closer to them as they eat. Family farms can be high-tech without being soulless.

The family farmers bristle at the idea that they are not environmental stewards. Technology allows them to be more efficient and use less energy and often more sustainable methods. Some Whatcom farmers have been working with the Lummi tribe to improve the health of the local shellfish beds by reducing contaminants and working to improve water quality, such as the recently announced Portage Bay Partnership.“Our future is working collaboratively with the tribes and the Dept. of Ecology,” said potato farmer Ebe. “If we go to court, no one wins.”

There are cultural, political and lifestyle differences between urbanites and many farmers. I have a hunch some Amazonians think Alexa is a food source, not far from a Star Trek replicator. Many of us city dwellers and suburbanites are disconnected from the land and people that feed us. We have neighborhood P-Patches in Seattle, yes, and another generation fought hard to save the Pike Place Market and preserve King County farms. But our everyday understanding of the domino effects of development pressures and population growth is blunted by our busy lives.

Likewise, many family farmers have little idea of what it’s like to live in a South Seattle food desert or the value of urban planning and mass transit that, ultimately, could protect agriculture lands. Many are often misled too by political rhetoric that demonizes their liberal urban consumer customer base.

Save Family Farming is reaching out to let us know they are experiencing challenges in their part of the food chain. It would be sensible for us city folk to up our ag-literacy before that chain becomes another crisis.