How can we 'meet each kid, each student, where they’re at, and give each student what they need'? 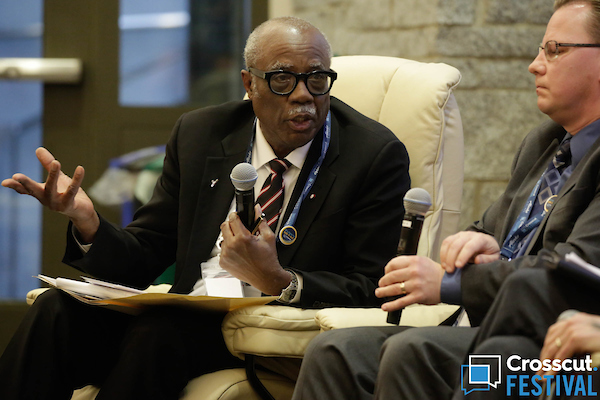 Before beginning the “Rethinking schools to create education equity” panel at the inaugural Crosscut Festival, moderator and Seattle Times staff reporter Claudia Rowe had to make one thing clear: the difference between equity and equality.

Rowe then asked the panel,  which included the state superintendent of schools, a teacher of the year and a national expert on multicultural education, about the impediments to equity that they see in schools.

State Superintendent Chris Reykdal cut right to the chase. "Long systemic and structural elements of racism," he said. "And, we've got to say that word out loud when we talk about schools."

The group explored topics such as schools that remain racially segregated due to homogenous zip codes, the pressures of high-stakes testing, and the challenges of working with children who have experienced trauma.

While Dr. Nadine Burke Harris, originally slated to appear, was unable to attend, her pioneering research was still present in the conversation. Harris, a Bay Area pediatrician, has found that adverse, but common, childhood experiences like parental divorce, substance abuse or neglect can change students’ neurology and directly affect learning. She calls these insults ACEs, or Adverse Childhood Experiences.

"Given the dire stakes, Burke Harris’s prescription sounds relatively anodyne," Rowe wrote an article about her work for the Times: "sleep, exercise, nutrition, meditation, mental health counseling and healthy relationships. But it, too, is grounded in research."

Burke Harris recommends screening all children for ACEs before they enter school, as a preventative measure, but not everyone on the panel embraced that idea.

“If you were to screen students for ACEs, just like you [do for] vaccinations, what would that do to your expectations of that student?” Rowe asked the panel.

“I have some real concerns about screening and labeling the child," said James Banks, the Kerry and Linda Killinger Endowed Chair in Diversity Studies at the University of Washington. "My concern about this theory is that it focuses on the child’s characteristics and the family and not on the school structure.”

Reykdal pointed out that the school structure does not support the kind of activity that can counteract ACEs. Instead, schools shorten recess and lunch in favor of preparing for standardized testing.

Lyon Terry, a 4th grade teacher at Lawton Elementary in Seattle, then raised his concerns about labeling: bias.

“If I knew the ACE score of all of my students, I would worry significantly about my own implicit bias,” he said. “What I assume is that they all have [ACEs].”

Whatever challenges students face, from trauma to racism to disability, the conversation always came back to equity. By understanding that all students have varying trauma and privilege, the panel was able to address ideas and tactics that could level the playing field for students.

Listen to the full conversation using the Soundcloud link, below.