Can the Northwest hold the line against climate change?

As the the Trump administration rolls back environmental protections, coastal communities form a choke point for fossil fuel exports. 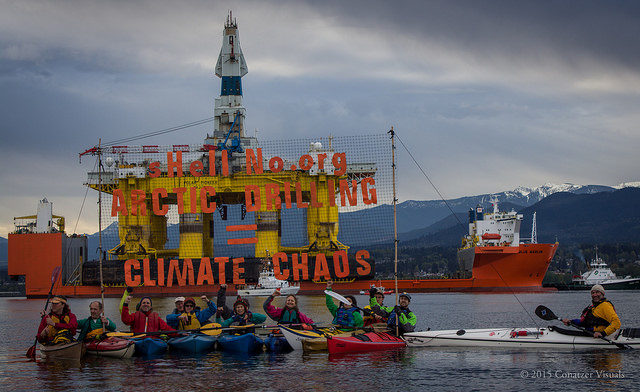 The list of fatalities is long: eight proposals to ship U.S. oil to Asia, nine gas and petrochemical projects, and seven coal-export terminals killed, with another 11 delayed or hanging by a thread. All that, thanks to opposition from communities in the Pacific Northwest, unfavorable economics, or a combination of the two.

Journalist Michelle Nijhuis offered this accounting of the dead to kick off a discussion of fossil fuel development and climate activism in the Pacific Northwest at the first annual Crosscut Festival February 3.

Our region is a choke point between oil, gas and coal supplies in the Interior West and Asian markets, Nijhuis reminded the audience. Eric de Place of the Sightline Institute has dubbed it a “thin green line” against fossil fuel export and development that would further commit us to dangerous and irreversible climate change.

But if the panel was a reminder of the power of local activism against a global threat, it also laid bare just how fleeting such victories can be. Still in the works, Nijhuis said, are two oil-by-rail proposals and 24 natural gas export proposals. And the Interior Department under President Trump has put forward a new plan that could open the waters off of the Northwest coast to oil drilling for the fist time in some 30 years.

Nijhuis was joined onstage by Tim Ballew, former tribal chairman of the Lummi Nation who helped beat back a proposed coal-export terminal near Bellingham, climate activist Emily Johnston who cofounded the group 350 Seattle, and Sally Jewell, who served as the CEO of REI before taking a job as President Obama’s Secretary of the Interior.

Jewell recalled the day, as Interior secretary, when her husband sent her a photograph from Seattle of Royal Dutch Shell's Polar Pioneer oil drilling rig parked in the port en route to the Arctic. The journal Nature had recently published a paper listing the fossil fuel reserves that would have to remain in the ground if there was any chance of keeping global temperature rise out of the danger zone. Arctic oil was on that list of untouchables, and activists like Johnston were making hay with it.

“The Seattle City Council unanimously sent me a letter saying stop drilling in the Arctic,” Jewell recalled. But even as the lead overseer of the nation’s natural resources, she was largely powerless to stop it. Her predecessor, George W. Bush’s Interior Secretary (and former Idaho Governor) Dirk Kempthorne, had approved vast oil leases under the Arctic ice.

“Those are contracts from the U.S. government to a private company," Jewell said. “The only way to stop Shell from drilling would have been to repay them what they had invested, which by that point was about $7 billion.”

The Interior department put tight restrictions on drilling to protect marine life and prevent another Deepwater Horizon-scale disaster, leaving Shell with only a 29-day window to drill. The company drilled anyway, but found nothing that would suggest that full development made economic sense.

“I heaved a sigh of relief,” Jewell said. But, she added, “the reality is, there is oil up there, and until we move beyond fossil fuels, it will be at risk.”

Johnston talked about some of the strategies that activists have employed to slow this type of development, including going after banks and financiers who fund what she called “the end of the world.” She also talked about the importance of local action.

“Right now, because we know that there is no audience at the federal level, we have to accomplish things locally,” Johnston said. “And we have to do that in a way that it serves as a model for … the rest of the country.

“It’s really about changing people’s imagination, and their sense of what’s possible.”

Ballew, for his part, talked about the importance of pressuring elected officials to act responsibly. “The Cherry Point issue was not the reason I went into tribal leadership,” he said, referring to the proposed coal export terminal, which would have been the largest in the nation's history. “But it was the issue of the day, and my people told the council that we need that site protected.

“If the citizens hold the leadership accountable,” Ballew said, “eventually they will move.”

Listen to the full conversation with the Sound Cloud link, above.