As time runs out, will lawmakers pass a historic carbon tax this year?

A carbon tax got as far as it ever has in the state Senate. But then it died. 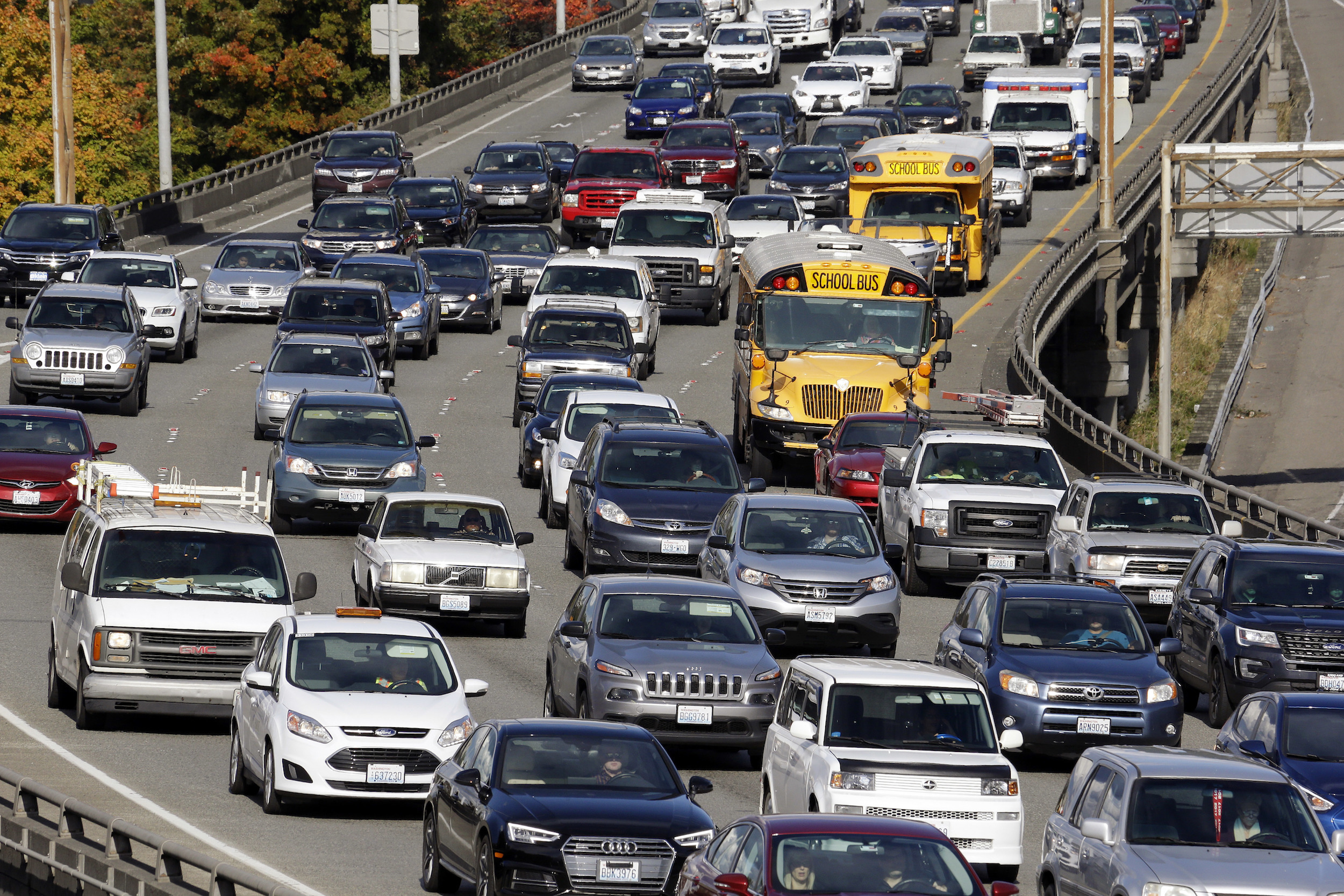 Editor's note: A day after this story was published, legislators said there weren't enough votes in the Senate to pass the measure. A leading advocacy group, Carbon Washington, said it would turn its attention to passing a ballot measure later this year or winning approval in next year's legislative session for "putting a price on carbon."

With just over a week before the Washington Legislature adjourns for the year, the question recurs: Will legislators make Washington the first state in the nation to tax greenhouse-gas emissions to fight climate change?

Lurking in the background as state legislators debate a carbon tax is the threat of a citizens’ initiative on the November 2018 ballot to tax carbon emissions. In Olympia, legislation has passed three Senate committees, the latest on Wednesday. That alone is historic, said to be the first time that a carbon fee was approved by any panel of state politicians.

And now, it could be scheduled for a Senate floor vote as early as Thursday.

But the measure (SB 6203) still has far to go to reach the desk of Gov. Jay Inslee to be signed into law. This year marks Inslee’s sixth attempt to forge an economic policy to reduce greenhouse gas emissions.

Compromises already adopted to move the legislation forward include slashing by nearly half the tax rate originally proposed. The legislation also grants nearly 70 exemptions affecting a range of industries, from well-known names like Boeing and SpaceX to less-conspicuous pursuits such as turkey farming and mayonnaise manufacturing.

The exemptions are drawing fire from vocal Republicans who say the tax is going to hurt the middle class the most. And even some left-leaning Democrats are concerned that legislation would worsen Washington’s regressive tax structure, already considered the least progressive tax system in the country.

“There are so many carve-outs in this bill that every industry producing significant carbon has been exempted. So who pays? Washington’s hardworking middle-income families,” said Senate Minority Leader Mark Schoesler, a Republican from Ritzville. He calls it “the Democrat energy tax,” and “one of the most regressive taxes possible just so our state can, as the bill’s prime sponsor put it, join a global trend.”

Since Inslee’s election as governor in 2012, he has unsuccessfully sought to not only join that trend to decarbonize the economy, but to lead it. For five years running he has been bested, partly by a Senate controlled until this year by Republicans but also because of lukewarm Democratic support.

This year, with Democrats returning to power in the Senate, it looked like things could change. Sen. Reuven Carlyle, a Seattle Democrat and chair of the Senate Energy, Environment & Technology Committee, led the charge by filing the legislation. But even some Democrats are put off by the long list of exemptions for industry.

Democratic Sen. Bob Hasegawa of south Seattle said that “those who can least afford it will be bearing the biggest burden,” earning him props on the Washington State Republican Party’s Facebook page. Senate Vice President Pro Tempore Steve Conway, a Democrat from South Tacoma, also is “concerned about regressivity.”

And while environmentalists call the bill a step in the right direction, they are not universally overjoyed, either. It’s “not as aggressive as …  we would like to see,” said Clifford Traisman, lobbyist for the Washington Environmental Council and other environmental groups who have banded together as the Environmental Priorities Coalition.

Environmentalists have their own problems with some of the exemptions and are disappointed that the initially proposed $20-a-ton tax now starts at $12 a ton. That’s akin to adding about a dime to every gallon of gasoline purchased. (Comparison chart here).

Estimates from the governor’s office about a previous version of the legislation — onw that anticipated a $10-per-ton tax predicted electricity prices — would initially increase by up to 2 percent, while gasoline prices could rise around 3 percent. Conservative analyst Todd Myers of the Washington Policy Center estimated that with the $12-a-ton tax, an average household with two cars would pay an extra $210 a year when the carbon tax goes into effect in 2019.

In an interview, Carlyle told InvestigateWest that he remains “committed and optimistic” about “meaningful action” on a carbon tax. “We’re heads down, all in. That doesn’t minimize the lift and the work ahead.”

Carlyle said he agreed to exempt many industries because his bill is aimed at greenhouse gasses produced by cars, trucks and other forms of transportation. Those account for 43 percent of Washington’s greenhouse gas emissions — twice as much as the state’s power plants and nearly twice the total produced by all the industrial, residential and commercial emissions put together.

“So, the pollution — the CO2 that we’re actually trying to get at — is actually driven by transportation, meaning folks driving in their car, period,” Carlyle said, which is “a very important reality check.”

As for the exemptions, “I’m the one who drove the conversation about exempting our major commodity industries,” Carlyle said.

“I believe it is actually responsible public policy to focus in on, in effect, a pollution fee for transportation to invest in reducing pollution in transportation,” he said.

Some money raised by the tax would go toward the electrification of transportation,  investments in alternative fuels and improving the electrical grid’s resiliency, for example.

The tax isn’t meant to send a price signal that discourages driving, Carlyle said, since the days of $4.50-a-gallon gasoline saw a relatively modest drop-off in driving. The tax is a means to raise money for investments that move the state toward a cleaner economy.

“How we spend the money matters,” Carlyle said. “So, I think we ought to spend it on clean energy … and next-generation jobs — and that’s the focus.”

Some of the revenues also would be used to help displaced workers in fossil-fuel-dependent industries. And millions of dollars would reimburse low-income residents for increases in electricity and gas costs attributable to the tax. The bill also targets economic stimulus for creating jobs in low-income rural and urban communities, and promotes environmental-justice issues by, for example, directing health authorities to analyze air pollution in poor communities.

Exempted industries in the original bill included several fuels, among them aircraft fuel, biogas, biodiesel and fuel used for farming. But the list since has expanded to reach nearly 70 classes of businesses, including petroleum refineries, paper mills, aircraft manufacturing, chicken and turkey production, and lots of industrial food processing including the manufacturing of mayonnaise.

Carlyle said he doesn’t know who wanted the mayonnaise exemption. He is focused on transportation. “How much does a mayonnaise plant emit? I don’t know,” Carlyle said.

He’s aware of criticism that “we’re exempting everybody. I haven’t added it up, but I guarantee you, all of them combined is a modest fraction of our actual CO2 emissions.”

If that doesn’t happen, a citizen’s initiative seems likely to appear on the November ballot. Job postings for the Alliance for Jobs and Clean Energy include a position for a climate campaign manager. That posting says the alliance — a coalition of labor, social justice and environmental groups — plans to start a political action committee with tribes, businesses, funders and other organizations. It would have until July 6 to turn in signatures from at least 259,622 registered voters to force a November vote.

“We have started hiring staff,” Nick Abraham, a spokesman for the Washington Environmental Council, said of the initiative effort. He remains optimistic that a carbon tax will happen this year — whether it’s the passing of the bill or a citizens’ initiative. “We are closing no doors to get that accomplished.”

The threat of a citizens’ initiative — which neither the Democrats nor the Republicans in the Legislature control — theoretically could have helped propel the legislation forward, the idea being that legislators could work out something less radical than what the voters might approve.

But a provision adopted halfway through the legislative session removed that incentive for unenthusiastic legislators to support some compromise. The provision, adopted Feb. 1, says if the initiative passes, the initiative takes precedence over whatever the Legislature comes up with.

Myers, director of the Washington Policy Center’s Center for the Environment, has been trying to get the word out about this clause. He said it encourages environmentalists and their allies to take a chance on what he predicts will be an extreme ballot initiative, because even if they lose the vote on the initiative, any bill passed by the Legislature would provide them a backstop.

“Even if it fails, they still have this law…so it actually encourages policy extremism,” said Myers.  “If you’re an environmentalist, you like it,” he said.

This story is part of InvestigateWest’s Statehouse News Project, a crowdfunded effort to provide independent reporting on environmental issues being considered by the 2018 Washington Legislature.