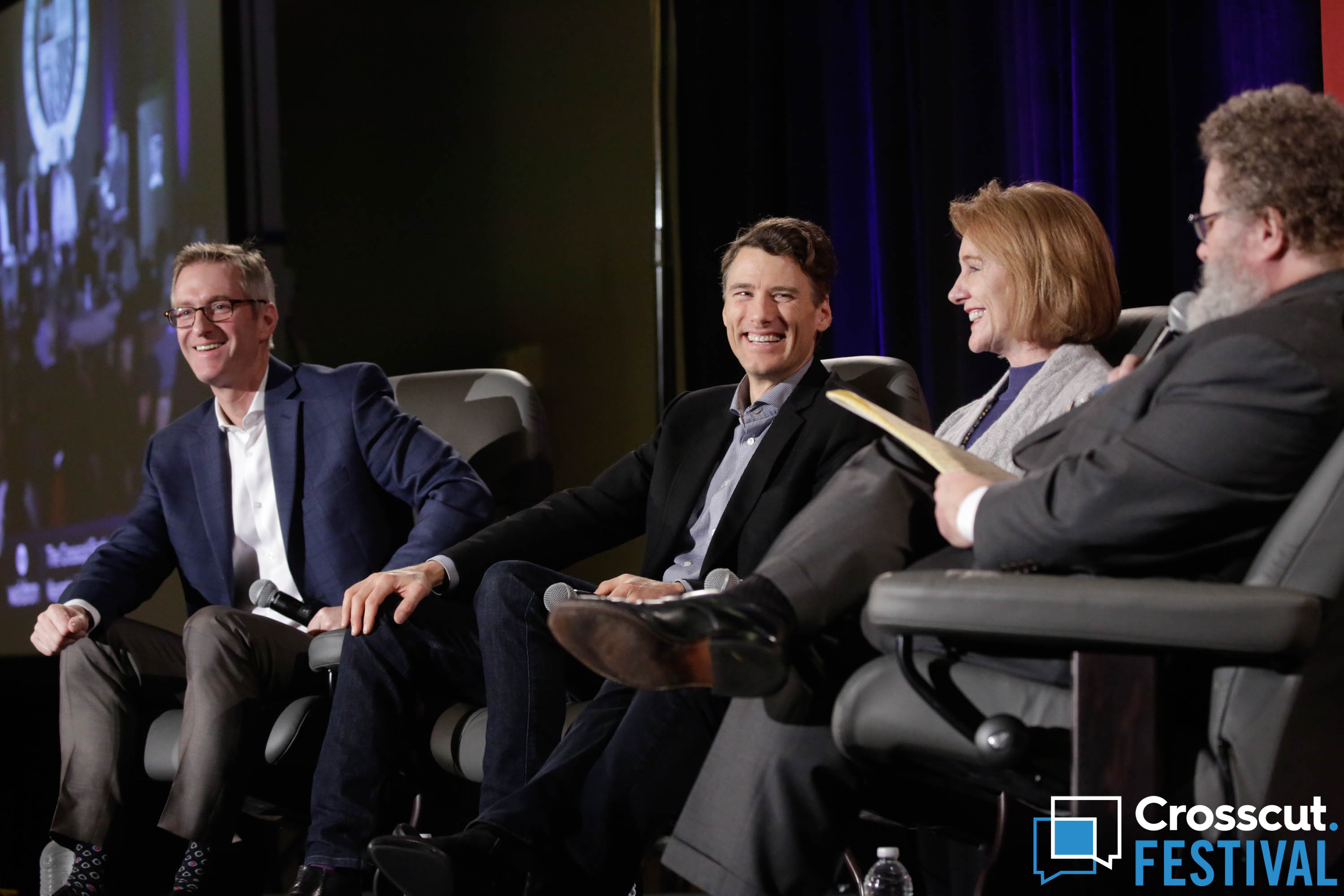 The western edge of Cascadia shares many wonderful natural features from the Cascade Mountains to the rich lowlands that stretch from Stanley Park in Vancouver, B.C. to the Willamette Valley in Oregon. Despite its natural beauty, this part of the region is rapidly urbanizing. So it made sense to bring together the mayors of the region’s three biggest cities — Seattle, Portland and Vancouver, B.C. — to talk about the challenges of their towns and future of the region.

The discussion that ensued was one of the keynote events of the inaugural Crosscut Festival hosted at Seattle University, Feb. 2-3. It turned out to be a first: it was the first time Portland’s mayor Ted Wheeler, Vancouver’s Gregor Robertson and Seattle’s Jenny Durkan had ever gotten together.

Durkan was the mayoral rookie in the room, Wheeler has only been in office a little over a year, and Robertson, who looked the youngest, has been in office longest, going on 10 years.

All run progressive cities, all are wrestling with the same issues: homelessness, affordability, equity, transportation, police reform and how to be the greenest city possible.

What are their top challenges and priorities?

Gregor Robertson has presided over an era of enormous change in Vancouver, including major real estate speculation that has made it difficult for locals to afford to stay in the city. “The best cities in the world are impacted by investment because they are like blue chip stocks now,” he said. That has made life challenging for those who don’t own property. The current emphasis, he says, is for Vancouver to do everything in its power to create as much rental housing as possible (about half the population currently rent). What’s happened is “a bit of being the victim of our own success. You build a great city and people keep coming. . .”

Robertson had one piece of advice for his fellow mayors: use every single tool available to build affordable housing with a “laser focus.” Those tools include incentives to encourage developers to build rental and affordable housing, using public land, rezoning and convincing builders to take a longer view on profits instead of the quick pay-off of building luxury units. Don’t get caught up in trying one thing and then another, he advised, do it all at once. “We should have used everything in the beginning” of the Vancouver boom, he said, but they didn’t realize how massive and how sudden the impact of growth and foreign investment in real estate would be.

Ted Wheeler addressed the issue of better planning in the face of a major upzone he is trying to implement in Portland. He wants more towers, but is getting pushback from people who live in existing towers who don’t want their views blocked — high-rise NIMBYism.

One of the challenges is that Portland is a walkable, transportation-friendly, livable city beloved by its residents, but it needs to accommodate more people. He wants density increase in the urban core, transit corridors and commercial centers — and this follows long-laid plans to concentrate development in order to protect surrounding farmlands and rural areas. But that implicit bargain, he said, made long ago by Portland’s urban planners, is not something newcomers have understood, and some of the specifics have generated pushback.

Still, Wheeler says he’s moving forward with his new densification plan. He claimed he is ready to fall on his density sword if necessary. “If I do only serve one term as mayor I will be the fourth mayor in a row in the city of Portland to serve one term and that may be the new reality. . .if you do the right thing — the long-term thing — you may be in politics for only a little while. . .That’s okay with me.”

For her part, Jenny Durkan acknowledged the importance of building affordable housing, but also expressed a larger concern about economic opportunity. Asked about the impact of Amazon, she acknowledged it has brought challenges. But the broader issue, she said, is that while the tech economy is flying high, the old economy is headed downward. “If we don’t intentionally build a connection between our kids in schools and giving them the job skills needed for that new economy, we will see more displacement and more disparity.” So, yes, affordable housing is critical, but so too is an economic path into the future.

The mayors agreed that cities are where innovation and problem solving must happen. Mayor Wheeler said that local government is where progress can be made on income inequality, and Durkan agreed. “Nothing good is coming out of Washington, D.C. for a least three-and-a-half years,” she said. “If we want to move forward on the progressive values that we care about, it’s going to come from state or local government, and I believe it’s going to be the cities and urban centers that lead.”

The mayors also discussed other cities that inspired them. Wheeler is probably the first Northwest mayor in ages to point to Los Angeles as a role model. Robertson said he likes Paris and Yokohama. They also laid out their long-term dreams for their respective cities. The mayors generally resisted going overboard to promote their towns. Mayor Wheeler warned the audience, “No city lives up to its own hype,” but Durkan couldn’t help but interject saying, “That’s not true!” She later followed by unabashedly picking Seattle as her most inspiring city.

The panelist left the overall impression that Cascadia’s mayors are tackling large issues and see themselves on the frontlines of progressive reform. They’re engaged in trying to responsibly manage the challenges of prosperity and growth rather than decline — all while keeping the potholes filled and the “character” of their cities intact. Those in Cascadia’s city halls have big jobs to do, and the stakes only get higher and higher.

The full Cascadia Mayors panel discussion can be found here.